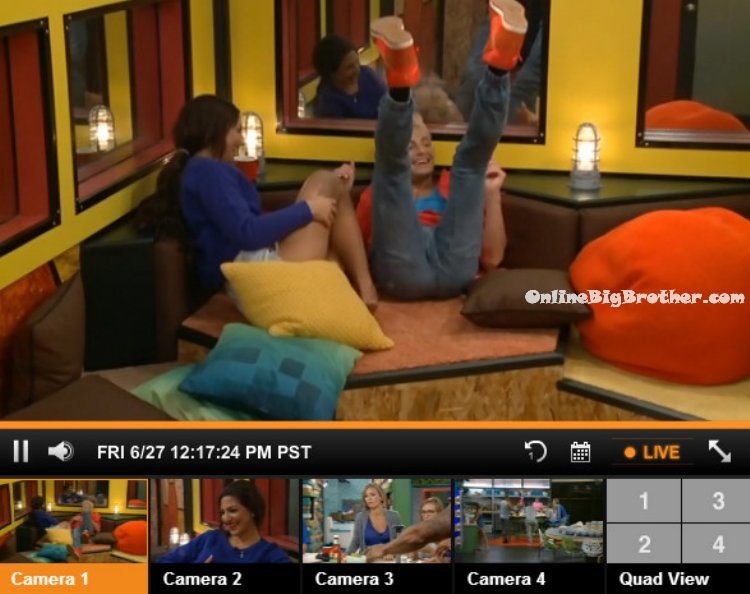 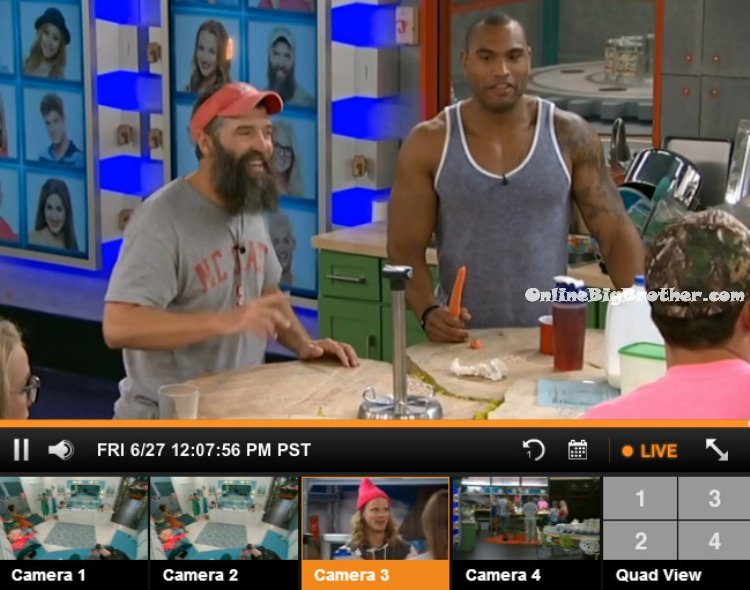 12pm In the kitchen – Donny, Devin, Zach, Hayden, Caleb and Nicole are gathered around the kitchen bar. Devin comments about how he got a DUI when he was 22 years old and can’t drive with alcohol in the car or even have a drop on it. He says I’ve got that restriction for 10 years till I’m 32 years old. Hayden starts talking about his pedicab job and how he only gets paid in tips. Devin asks him if he claims it. Hayden says we’re supposed to but… Donny tells him to shhhh!! They laugh. Paola comes in and starts saying POW POW POWER OF VETO!! Meanwhile in the hive room – Frankie is talking to Victoira. He asks her of the two nominees do you care who goes home? Victoria says no I don’t care. Frankie says me neither. Frankie reassures Victoria that she is good and not on anyone’s radar. He tells her to just stay on top of the wave and let everyone else fall a part. Victoria says I think I’m being nice to everyone. Frankie says oh no, yeah you are! Frankie tells her to kill it in the veto and they leave the room. 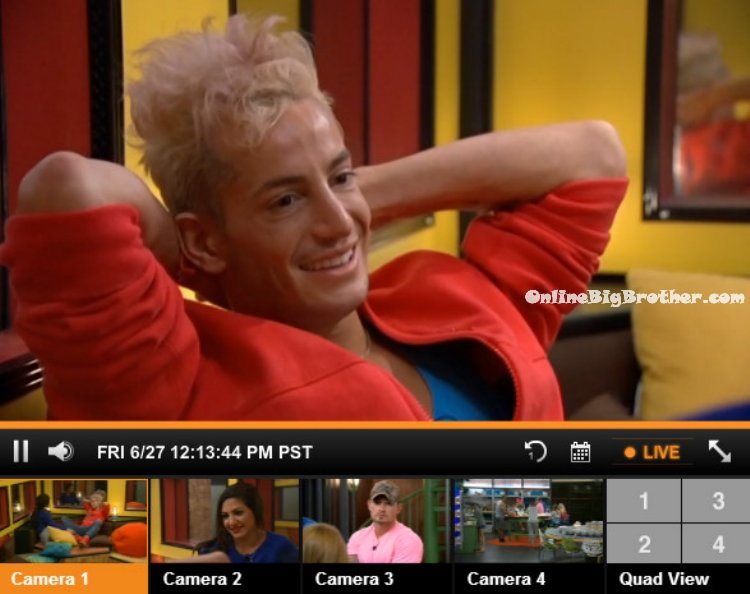 12:40pm In the kitchen – Frankie comments to Christine, Paola, Nicole and Brittany that tomorrow is Devin’s daughters birthday and that’s why he’s been a bit off. Frankie says maybe we can make him feel better. (Frankie’s doing damage control for Devin’s freaking out yesterday and being emotional.) In the living room – Caleb, Devin, Zach and Amber are sitting around chatting about random things. Caleb and Devin are mostly talking about sports. Nicole, Brittany and POW POW join them.

In the bathroom – Brittany suggests they do a fashion show. Frankie asks her if she can make him look more like a woman. Brittany says yeah. Frankie leaves. Brittany asks Donny how he’s feeling. He says he’s feeling all right. She asks him if he took vitamins today. Donny asks why? Brittany says so you get all your vitamins. Donny says no I’m okay. She asks him if he had a protein shake and he says no. He says he had some of that egg stuff.. He says that he’s hoping the pov is a mental competition so he can stimulate his brain. 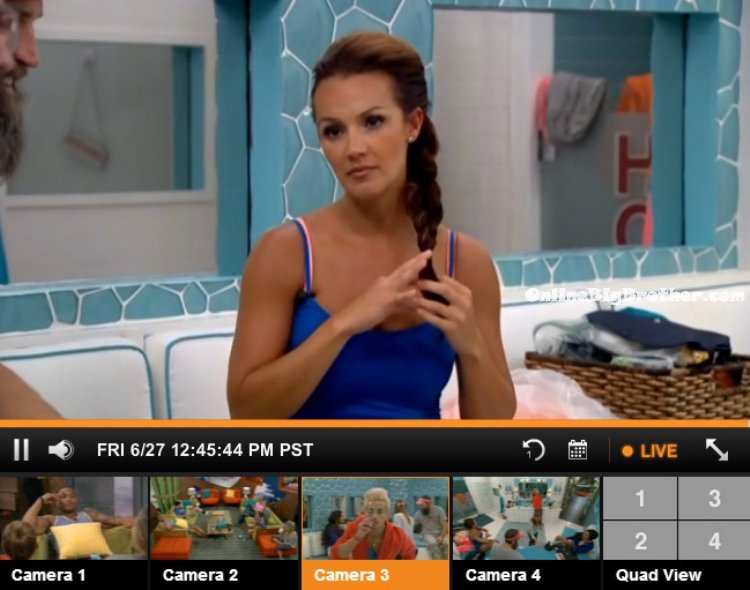 No Vids this season?

You can also TRY the live feeds for 48 hours with the FREE Trial.

Hey Dawg I’m still getting used to the new site. So where is a quick look to see who is who? You know that Caleb is HOH and Donny and Pow Pow are the noms, etc. With all the twists this season I think I’m going to need a visual to keep it straight each week.

We’re stilling trying to figure out how to best display all the HOH’s noms etc using the graphics. Until we have it figured out he table at the top of each post give you the rundown of all the game related vital stats.

Okay I’m an idiot…its in chart form rather than face highlights. I think I need a nap.

Hodar!! Sorry just had to…

It’s sucks that they started playing earlier and therefore we don’t know exactly where everyone stands because with these twists everything is happening way too fast.

I don’t know if I can remember all of the HGs with their being so these new twists. But it feels though floating is going to be the right gameplay this week (yuck)

***floating these weeks as long the 2 HoHs rule the house. With 2 HoHs there is no incentive to win because even if you are nominated you have B of B then POV and you still could be on the block against a bigger target.

Am I completely confused and wrong about the twist or do you guys agree it dampens gameplay?

i hope it is temporary (well I guess it will have to be, if they get to the point where everyone is HOH or nominated lol) I don’t really see the point of 2 HOH comps and winners. And clearly whatever the block comps are, they aren’t eliminating the presumed to be weaker players at least so that kind of works. There is potential for scheming in this but i am not sure anyone is doing that yet. HOHs conspiring with their counterparts nominees, just on the chance that those win the block comp, and take their HOH and themselves out of the running. HOH and those two both immune for the rest of the week, gives the HOH a chance to team up with two who will be competing for HOH the following week. HOH can’t, so needs more friends then enemies.

I usually have a hard time finding 1 or 2 houseguets I like, but this season I think I won’t have this problem.
Just because I feel my favs/least favs are so different I will share this. lol
Of course this may (WILL) change, but for now:

Simon and Dawg, trying to find a way to get the feeds in Canada but it’s not letting me. Is there a secret trick or are we shut out this year? Thanks!

They work in Canada, What seems to be the problem?

Its telling me that my postal code isn’t valid.

Hmm.. Double check to make sure the date values are entered correctly and in the format the form requires. Maybe there is no space for the postal code or a typo.

Also try clearing your browser cache sometimes things get wonky and that helps clear it up.

Thanks Simon, yeah I was entering it the Canadian way with a space. Signed up and ready to roll. Will donate later on. Great to be back for another BB season. So glad its all newbs, but two of my faves on the block before I even got the feeds. Oh well!

Ok can someone please explain to me if Victoria knows that Frankie nominated her. Maybe there was a conversation between them regarding her being a pawn or something. I just can’t believe she’s all buddy buddy with him.

What are all the alliances so far. I’ve read frankie is working with zach, and was recruiting christine. But he’s also working with the rock?

we haven’t been able to form a clear picture of the alliances yet. Frankie and Zach are rolling with a lot and there’s a new 8 person alliance floating around.

victoria, brittany, jacosta, hayden, pow pow, and donny have no alliances (devin revealed the double d’s and destroyed that alliance).

Do we know if the winners of Battle of the Block are safe through the week or are they eligible as replacement nominees if the POV is used?

Also it was kinda hard to tell (i was a bit sleepy when the feeds FINALLY came on last night) but do the 2 HOHs share 1 room or is the big room split into 2 sides?

I’m pretty sure Julie said the two nominees who win the BotB just become regular house guests. I could be wrong, but i think they can still be the replacement nominee.

And that would be a horrible double-whammy.

8 person alliance yea how is that going to work out.

not long, that’s for sure, but if it holds together for a couple of weeks even, it could influence the early game a good bit (taking the new hoh twist into consideration).

So we get Jeff on a loop instead of fish, FOT and trivia? I just signed up and the first thing I see is Jeff. Geez. I hope it’s just for now and not all season long.

This double HOH thing is nuts.
First,: it makes winning HOH even less desirable. It’s been a common strategy for people to throw comps, even before this.

Second: if you want to keep your noms/HOH then you can only nominate weak players. Otherwise you get de-throned when your nominations win the battle of the block.
Have they finally found a way to keep comp threats until the end?

Third: POV seems kind of redundant now. If nominees already lost a comp to remove themselves, should they get another chance? Not sure how I feel about that.

This should definitely shake up some people’s games. My only problem with it, is that the strategists may be the underdogs now. I’ve always preferred to watch someone with an actual plan. I really don’t want to see Caleb-like players go all the way, unchallenged, because people are too scared to nominate them.

Frankie needs to go home next week or this is gonna be a long summer. Caleb is really passing me off too. I hate it when people think their safe. No one should ever feel safe but they both don’t have a worry in the world.