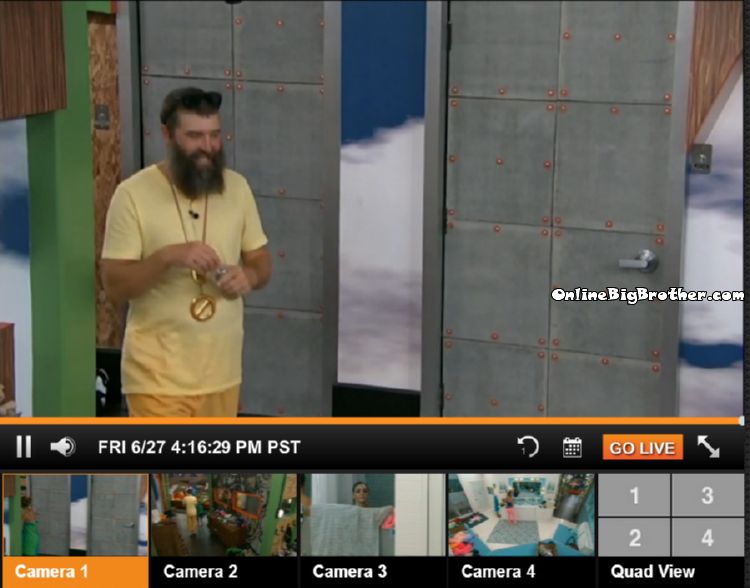 Big Brother 16 Live Feeds Subscriptions, if you don’t have them yet what are you waiting for! Free 2 day trialTry It Free! Subscribe now to the official BB16 Live Feeds 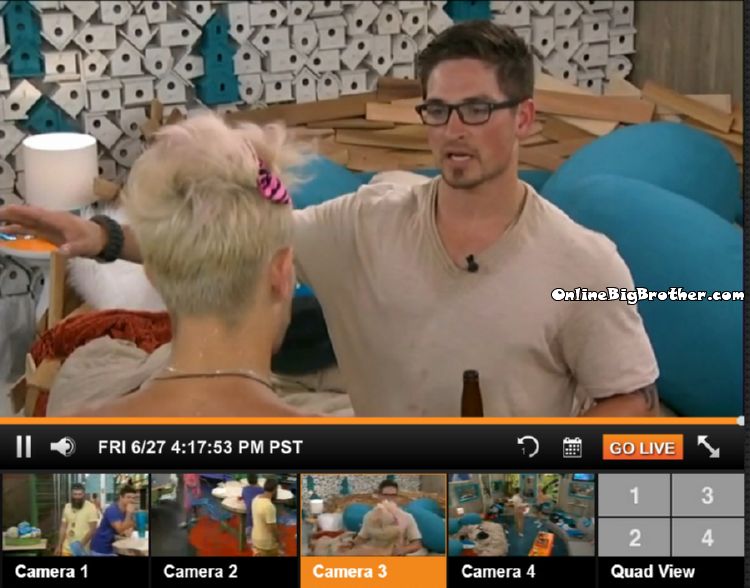 Sounds like the plan is to put Joey up and send her packing.

Frankie – “that blood isn’t on our hands. 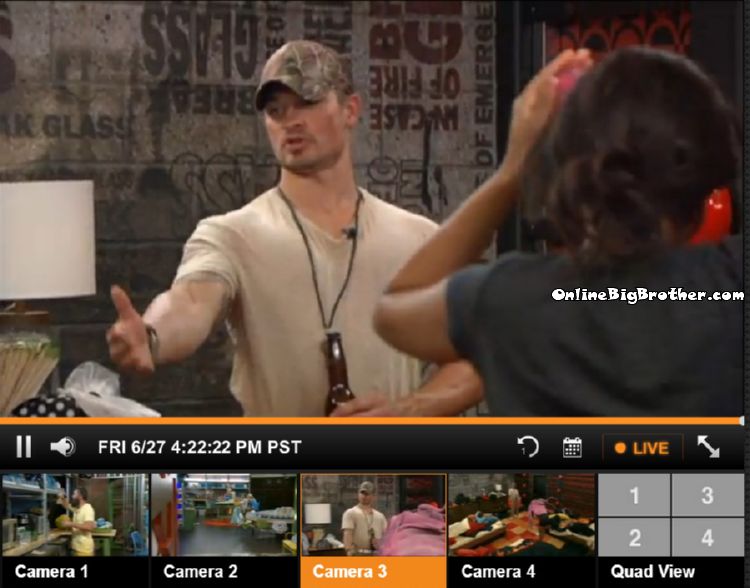 Random chit chat about the competition. 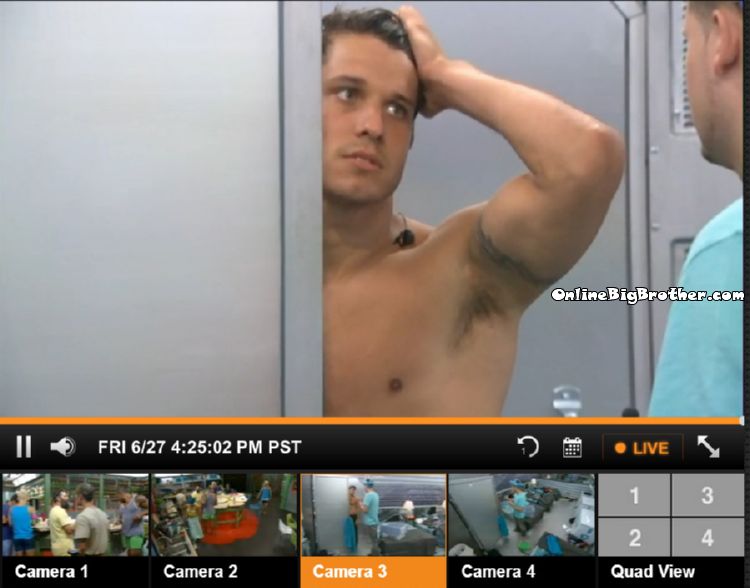 Cody is going to go up to the HOH and see if Joey is going up. 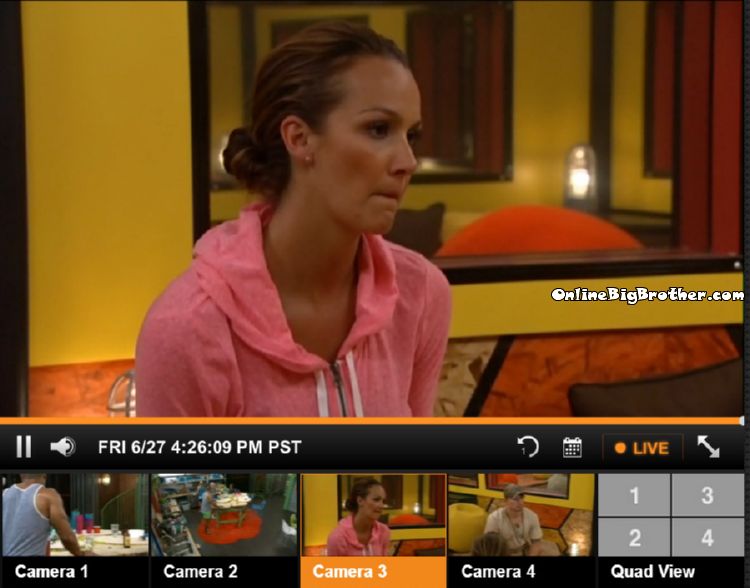 Caleb asks if she had to put up a girl who? Joey walks in. (LOL) Brittany says the girl would be Victoria or POW POW, “Victoria is safe for a week”

They both agree they like everyone in the house. Caleb says many people in the house have given him reasons. He wants to go to each person and make the decision that the house wants. Caleb pitches the idea of putting up Joey, He adds that a lot of people have thrown her name out there because she was the “ringleader” of the defunct early alliances. Brittany says if Joey goes up against POW POW she will stay in the game POW POW will be the one going home. Brittany again is suggesting Devin because he’s changed so much in the past days.

Brittany – “My vote is for POW POW.. I adore POW POW but when it comes to the game she has a personality that you have to take in doses” (To go home)

Brittany thinks POW POW will keep getting pout up on the block. Caleb points out that POW POW is weak in the game “Not competitive” the girls should want her int he game. Brittany says when it comes to competitors the strongest girl is Amber and now one will vote her out.

Brittany – “It’s smart to keep weak people in the game” Caleb says the twist is designed to get the weak people out of the game.

They agree Donny is very smart, Caleb – “Amber is in love with Donny.. she goes back to Donny and she feels like she’s at home..”

Caleb says those people end up winning the game because everyone loves them.

Did we ever expect it to survive past the first week

oh, my, caleb wants it to be a “house” decision…ugh! anytime i hear this i know the hoh is going to do whatever they want, regardless, and end up making needless enemies in the process. i’m sick to my stomach.

i know it’s early in the game and the hg are still “feeling” each other out, so i’ll bite my tongue and deal with it for now…but not for long…

I don’t understand the logic and dynamic of asking the house who to vote out ??? It’s the first elimination, the person is going home, not to the jury house, who cares?? Unless he is trying to sell himself as Mr. Goody… smh

The only reason to make it a house decision is you take the target off of you. At this point in the game ot probably os smart not to cause waves later on then make big moves but now he is playing it smart

Congrats to Donnie for winning his safety because he needed it it seemed.

I’ll be sad if Joey goes up and is evicted. That must suck that American’s first favorite is going to go first!

Another twist that blew up on launch, like Annie the saboteur going home first week. LOL.

If Joey ends up going this week then I hope Caleb is the next to go.

Oh PLEASE!! Not another season of what the house wants!! I don’t think I can take it.

They will vote with the house, but WHICH house.

Brittany tells Caleb not to repeat their convo to anyone.5 minutes later,he tells Amber what Britanny just told him LOL
Looks like Caleb will def put Joey up.

I hate it when the HOH just does what the house wants. Wimps

Love the new site by the way

Will be interesting to see what happens to “America’s Team” if Joey goes. I assume they will just replace her.

Caleb needs to pick a plan and stick to it. If he talks to too many people he is going to get himself into trouble next week. Not liking the way he is playing right now.

so happy donny won that, the logic of wanting him out in the first place was pretty dumb, hope joey goes home so the america’s alliance is already broken

I don’t get the logic either. Donny is Marty Huggins from the campaign.
Kind of reminds me of last season when they thought McRae was lying about being a pizza boy and was really a genius.

Am I the only one who feels like Donny could end up being one of the best players ever? I know it’s early, but if dude can continue to be likable(no reason he can’t be) and then be able to dig himself out of holes like he did now, He could be end up being one the most beloved HG

How about letting America be able to randomly upset an eviction? Let the votes fall where they may (no one being safe – not even the HOH). Wouldn’t be hard to set up voting window while everyone in house is doing their “I sadly vote to evict…” nonsensical diary room votes. America’s vote could be announced right after Julie gives the results of the house vote. And Lord YES, don’t let this be another “vote what the house wants season.” I know that if America could have random eviction override votes, the “‘what the house wants” stupidity could be forced out of play.

I LOVE Joey’s personality (and her crazy hair…her butt isn’t too bad either LOL) but if she really was the one to spill the beans about the all girl alliance then she DESERVES to go home, that’s just a silly move on her part. So was it Joey who spilled the beans? I’m so confused as to what the hell is going on in the house. Love Donny though so far, go Donny!

I wish they would get rid of Zach that guy gets on my last nerve.

Hey Dawg, are you going to be posting youtube videos of these scenes like you have in the past?

Glad to see Donny receive p.o.v…….so far him, Amber, and Nicole are my picks…

My Little Pony......Frankie!
Reply to  give me a break

Ok! So it looks like they are going to backdoor Joey! Unless Big Brother interferes, she looks like she is going home! Since America’s players are a team that did not get a chance to even get off the ground, if she goes, do you think they will replace her so it has a chance to do anything? It just seems every time there is something like this America’s choice always seems to be the first target. I am happy Donny is safe. I really like him. I think I COULD like Frankie, but he needs to be taken down a peg or two. He is WAY too comfortable and not worried!!

I would like to see Donny, Brittany, Derrick and Nicole to do well. I think I like Jocasta, not sure.
I really do not like Zach or Caleb. Pow Pow is starting to get on my nerves. Devin is iffy. I am withholding judgment on the others till I see more.

I honestly think “POW POW” will go no matter who they put up. We all can’t stand her and either can they. Then I hope Victoria is next!

Frankie rubs me the wrong way, his inflated ego is going to come back to bite his tush!
#teamdoubleDs

I for one won’t cry if Blue Joey goes home. She was super annoying and attention seeking on the live feeds, I thought POW-POW was gonna be this year’s Ginamarie but the smurfette is worse.If ya gonna go naked on national tv, ya better have a rockin bod

Caleb gives me the creeps…….sociopathic?