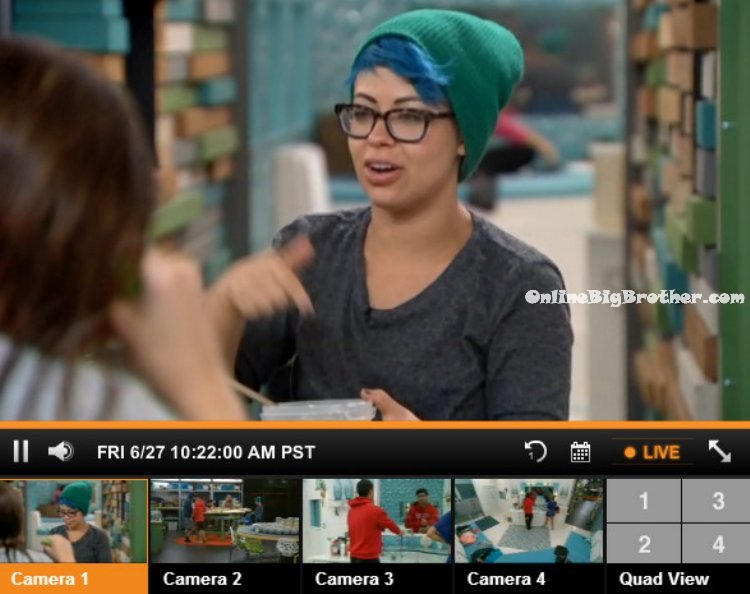 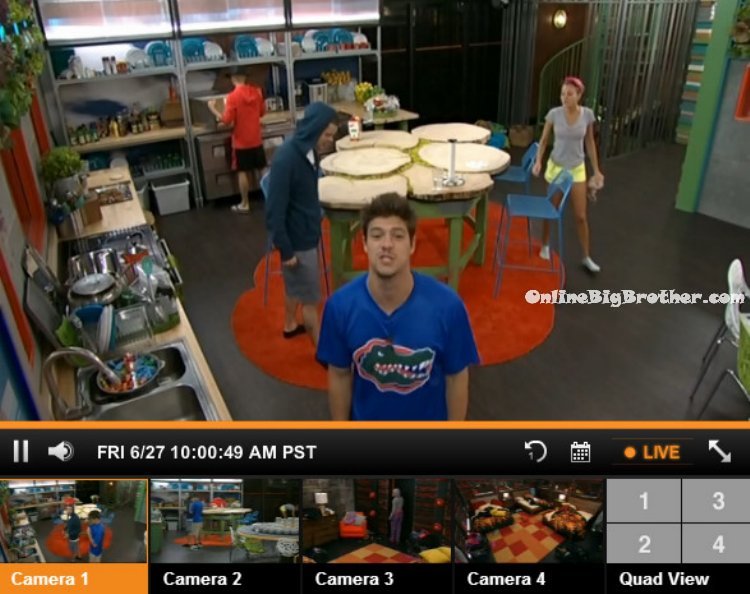 9:45am Big Brother wakes up the house guests – Jocasta and Donny are in the fire room talking. Donny comments on how he is on the block and has to fight for his life. The feeds switch to the bathroom where Victoria, Amber, Christine and Nicole are getting ready. Victoria mentions that they have to get ready for interviews (Diary room sessions). Meanwhile in the kitchen – Zach gives a shout out to his family. Derrick tells the other how clean Amber got the kitchen. Frankie comments on how sleeping in the birds nest bed with Caleb …so how Caleb managed to roll all the sheets up. Frankie says that he just got up and slept on the couch. 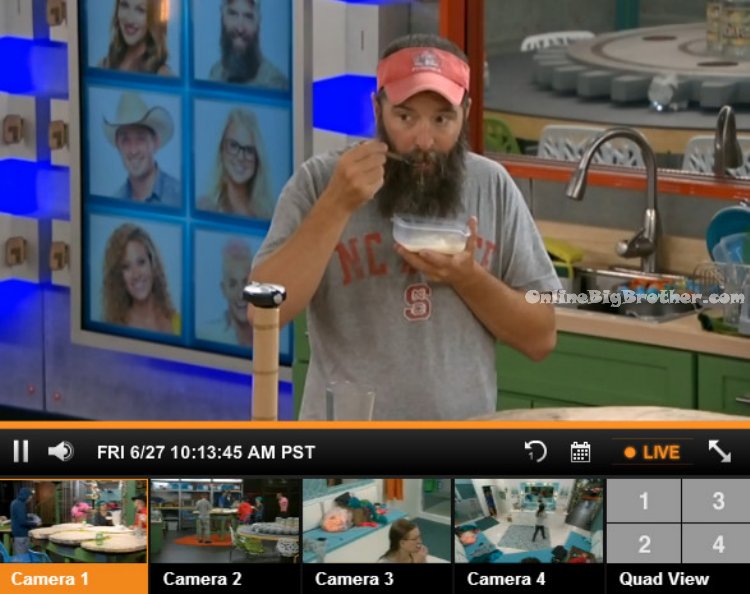 10:25am Derrick, Donny, Christine and Frankie are in the kitchen. Derrick thinks the POV will be early today since they’re already being called into the diary room. Joey eating slop says that she is in the Hunger Games right now.. I’m Katniss God Damnit! Frankie says no you are not! Cody joins them. He says he is ready to see a banger out there today! I’m ready to go at it! Joey brings up how last night when Cody was sleeping he said his d**k itched but he couldn’t itch it because he had his mitts on. In the kitchen – Devin asks wasn’t there a veto that was more powerful? The others tell him about the diamond power of veto and how it doesn’t happen every season. 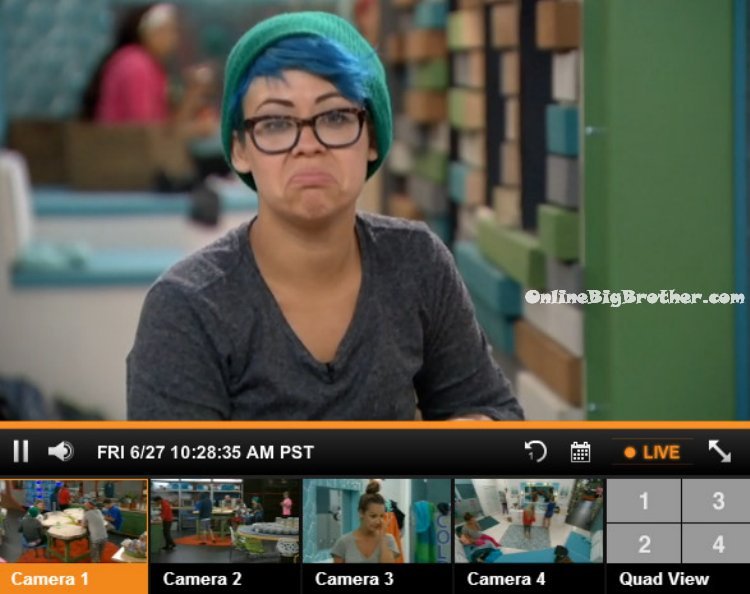 10:50am – 11am Up in the HOH room – Frankie and Caleb are talking about how they’ll be having an afternoon competition since the others have been at night. Frankie comments on how winning HOH was great for them …we establish some dominance and guarantee safety for at least 2 weeks. Caleb agrees. Frankie says maybe even longer. Frankie gets called to the diary room and he says don’t they realize I’m one of the girls when it comes to getting ready!

11am – 11:25am Devin comes up to the HOH room and says hey I just want to ask you guys a question.. Devin says I got real emotional last night. I was in the hive room with Amber and she brought up a great point. Joey is running around real candid talking about starting a girls alliance. Keeping Victoria and Paola around is beneficial to us because we can beat them in competitions and we can keep putting them up. The only thing I can think of in my heart is that if Joey went home ..no one would question it. And if the girls didn’t go with it then we would know (about a girls alliance being real). Devin says we could put it to Donny that if we pulled him off he would have to keep us safe. Frankie says no that would expose us. If you pull him aside and tell him to keep 8 people safe he is going to know we’re working together. Donny’s a genius, he is going to know. Frankie says I think this is a last ditch effort for Amber trying to save Donny. Caleb says lets just do this if Donny wins the veto and takes himself off then we put up Joey and send her home. If not then we send Donny home. Devin comments on how he knows his is playing too hard, too fast but I can’t just sit back like Howard did last season. People would know. Devin says if people ask about why I’ve been emotional just say I’m thinking about my daughters birthday. Devin says I know people that play too hard too fast go home first… but I feel like I have the weight of the alliance on my back. I feel like people are sharpening their knives to stab me in the back. Frankie says I really do think that the 3 of us (Frankie, Devin, Caleb) could make it to the final 3. Frankie hugs Devin and tells him how glad he is to have him in their alliance. Amber joins them. 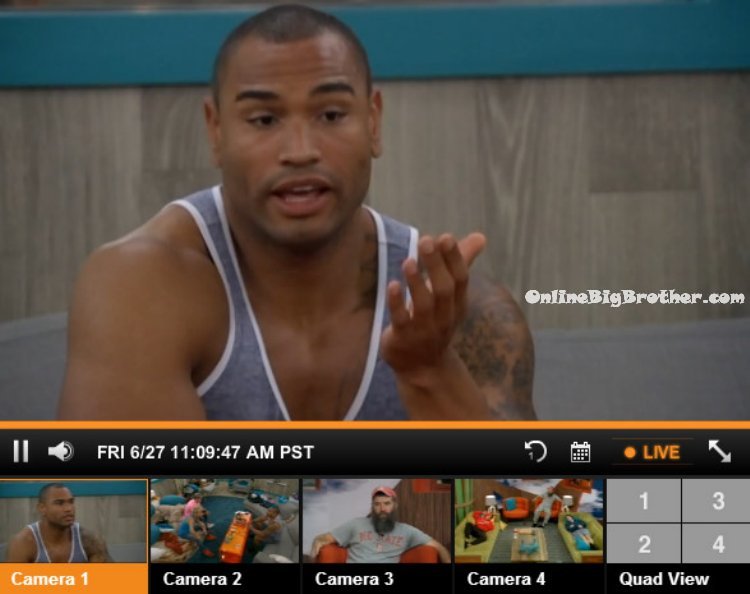 Just got back into town, catching up on the episodes. OMG!!! Its the reincarnation of Jameka!! So far I like Donny, Christine, Pow Pow and Hayden. On the fence if I should get the feeds, but I know I will cave, I always do. Cheers Simon and Dawg!

SHE IS SO LIKE JAMEKA, RIGHT?? UGH!! It seems BB has a cookie cutter mold they use for picking the HG’s and they sure do stick to it! What is with Devin? Something is seriously not right in that head as he definitely displays bipolar manic-depressive behaviors! He is the type of person that will wear you down to a nubbin and he doesn’t even realize how taxing on others he is. Why send Donny or Joey home when there are so many other bigger threats? This happens every year, they leave the big threats hanging around all season long and then when they lose the grand prize they can’t figure out why!!

Devin is probably gonna go out early at this rate :c …

Devin mentions he doesn’t want to be like Howard, but he’s doing the same things: making early alliances, making big plans, and talking too much, imo. When you play too hard, you end up talking to the wrong people. when you make alliances too big too early, you miss out making really solid reliable ones.

I reaallllllllllllyyy want Donny to stay, his comments seem sincere and he’s a fresh break from some of the others….

Gotta give it to Frankie, he’s playing a really great game right now.

What type of e-mails do you get if you subscribe?

A daily summary of every post from the site. You can unsubscribe at anytime.

Does anyone know who is in the 8 person alliance they are referring to? seems mostly all guys right?

I hope they backdoor Devin. He is dangerous and unstable. He needs to go home!