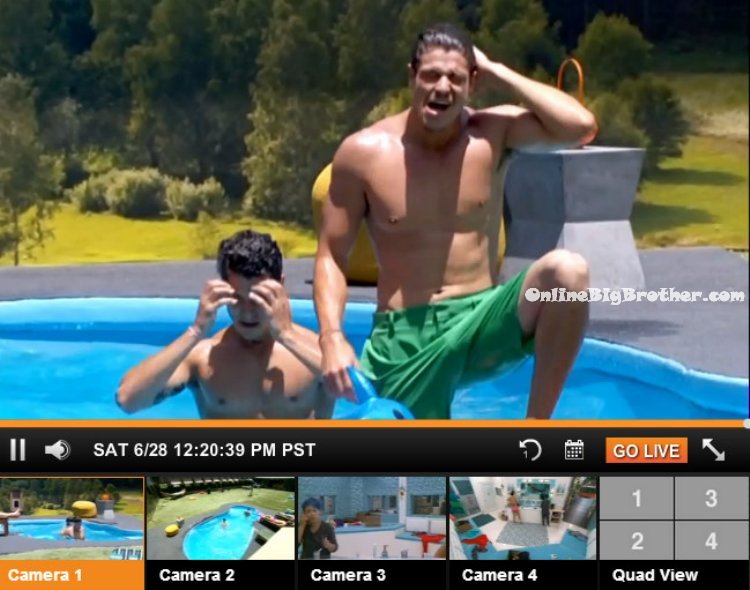 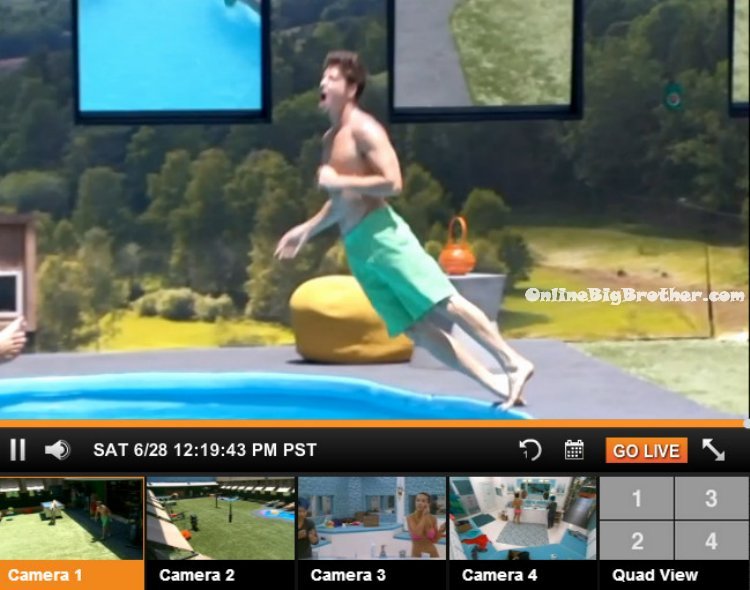 12:20pm The boys finish their laps back and forth in the backyard. Zach then goes over to the pool and falls into it. Big Brother then says there is ABSOLUTELY NO JUMPING IN THE POOL! They get out and layout in the sun. They comment on how Nicole’s birthday is on Monday. Frankie tells her that he’s going to make her a birthday cake. Nicole asks if Devin is having a hard time with it being his daughters birthday today. Frankie says yeah, I think he’s just going to separate himself from everyone today.

Meanwhile in the bathroom – Brittany and Joey are still getting ready for the day. They finish and had to the kitchen to eat.

12:50pm Hayden walks over to Nicole and asks her if he can pour water on her. She says okay and he pours water on her from his water bottle. Caleb says I wanted to be the first showmance of the season but I got beat. Christine and Nicole ask him by who? Caleb doesn’t say… he says I don’t even know what’s considered a showmance. Caleb says I don’t have a chance. Nicole says yeah you do with Amber. Caleb says I don’t think she even likes me. The others tell him yes she does, she’s even walking around wearing your hat. Joey talks about how she was in the washroom this morning and Devin opened the door and freaked out. Christine says that she was outside the bathroom waiting when Devin was in there and when he came out he freaked out too. She says it looked like he was going to kill me. They all laugh. The conversation talks about videos of April & Ollie from Big Brother 10 doing it. Frankie asks if you could see anything. Christine laughs as she says that Ollie was getting really into it and the covers were coming off them. 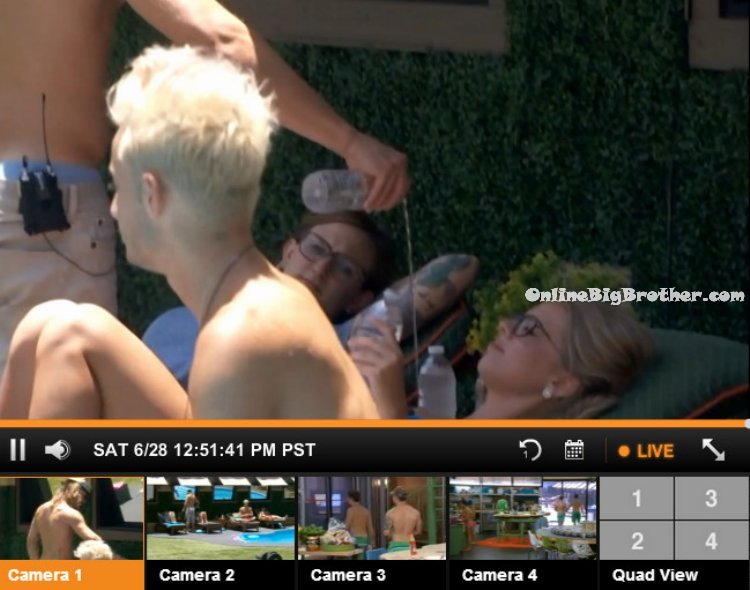 1:20pm In the fire bedroom – Pow Pow asks Donny if Caleb asked him who he should put up? She tells him that he’s going around asking everyone so that he doesn’t have to make the decision. Donny says no he hasn’t asked me. And I wouldn’t tell him any names anyway. I wouldn’t let him put it on me, that’s all on him. Its his decision to make. Donny tells her to just lay low and be happy. Don’t question anyone or anything. Paola says okay. They leave the room. 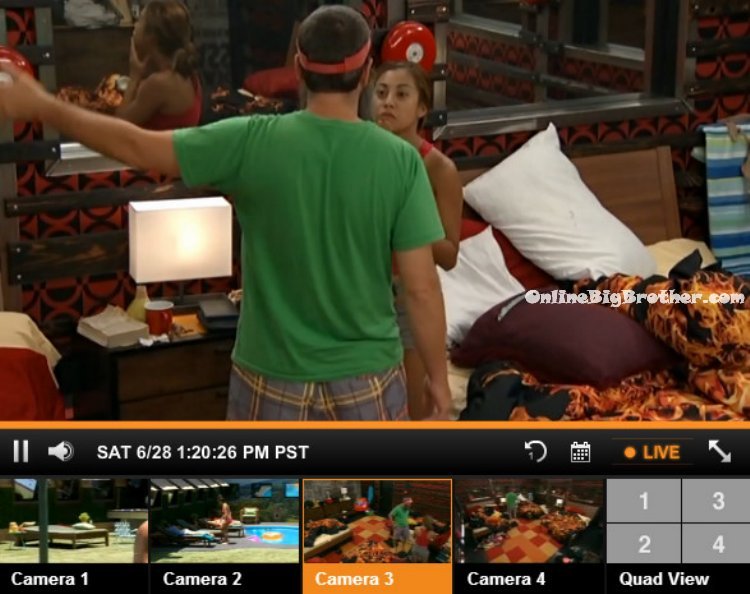 1:40pm – 1:50pm In the bathroom – Paola and Amber are getting ready for the day. Jocasta is chatting with them. In the kitchen Frankie, Donny, Nicole and Victoria are talking about music and other random things. 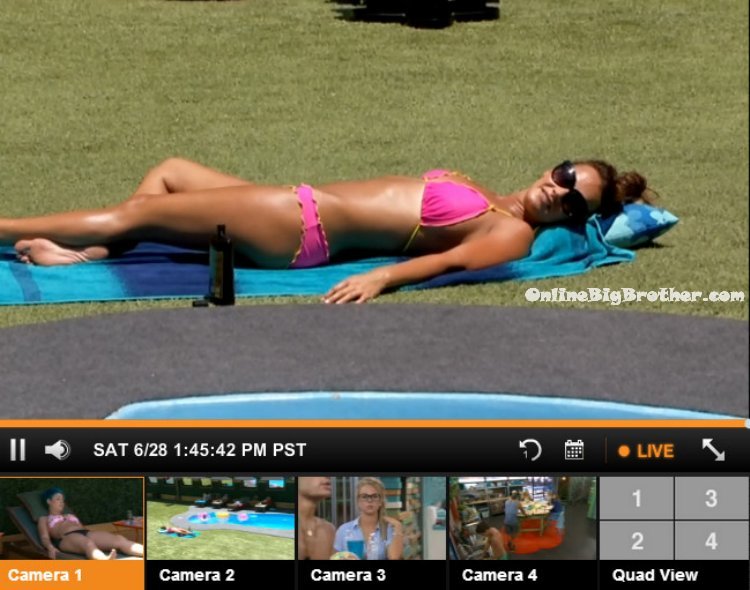 Any hope for Joey or is she definitely ?the one going?

There is always hope as the targets in the house change on a dime. Her only hope however is a blowup that switches the target off of her.

What timezone are the times representing?

The times of our updates are of the actual time zone of the bb house. Pacific Time Zone (You can also look at the screen captures we post as those have the exact date and time / camera they were taken.)

Love the updates this site rocks

This is the most immature cast since S9! Can’t wait for Caleb to ask Amber “I like you, do you like me?” “Will you go with me?” UGH! How high school like! The guy is a complete obsessive stalker! Frankie and Zach have alot to learn as it’s a long season and to claim to be F2 or F4 at this point is just ridiculous and stupid! Those people always get evicted at some point around the mid-way mark of the game, if not sooner! Just like Demanda and McP–sy thought they had everyone eating out of their hands–far from it! Zach will have the HG’s so irritated with him long before then! He is a piece of work and a total a-hole who should stick to golfing with a 10 year old! At least he can beat him! With the way Devin is behaving he gives creepy a new meaning! His bipolar, manic depressive ass should be the first one to go, instead of saying you are doing what the house wants then put up Joey, a non threat!! If Zrankie stands any chance of going far, along with Christine, then they need to get out the heavyweights first, like Caleb, Devin, Cody, Hayden…I cannot understand why production puts people in the house who have never seen the show. I had high hopes that we would see some real “gamers” this year but I guess not! Very disappointing again, Grodner!

Am I the only one who is happy about the prospect of Joey leaving? I really can’t stand that heifer

Caleb is a delusional obsessive idiot, wants people to reassure him that Amber likes him over and over.. I can see him making a cootie catcher all about Amber asking if she loves him yes or no, etc and getting the house to back him up with it. Devin and his creepy, parent mentality is getting on my nerves. So what it’s his kids birthday..make a cake and wish her a happy birthday..seems simple enough friggin’ head case. POO POO is just annoying and paranoid and that Jocasta’s bow ties just look stupid. This is just the beginning……

Jocasta’s a sweetheart, you sound butthurt

Is it me or does Devin mumble so bad that you can’t understand a fucking word he says?! Get the marbles out of your mouth!!

Well took a few days to put something up. Show is off to a sloooooow start IMO. WTF is up with BBAD starting off with meditation yesterday(night). It’s suppose to be entertainment not nappy time for the beautiful people.(shakes head)
8 person alliance….last no longer than week 3. I like Donny already. Bad for Donny sorry sir. He gets a couple more weeks and he’ll be chef Joe without the cooking. No idea if he can float mind you.
Played to hard to fast…… Joey, dah! Abrasive and hard charging not good strategy week 1!Playing to hard no consequences yet…. Frankie. He either runs deep on social or becomes big target within a couple weeks. Tough call on him so far. Funny the girls aren’t in get out Amber mode yet? Catty 101 really hasn’t gotten going yet. Speaking of nothing….like a plain Jane in a house of smoking hotties full of them selves. I give you Victoria! Wow Her looks but her personality or lack there of as well.

2 night premiere was terrible. The split story line not the way to start the season. Very fragmented like the house started the day they aired episode 1 so incomplete editing. Get better editing and fix BBAD it’s a snore fest. Everybody hold hands and go to your happy place. I’d rather throw up

Random thoughts on season. 2 HOH has potential but… it’s a SOCIAL game this looks all comp’d up this season potentially.That change in story development would put BB on the way off next summers TV scheduale. The social aspect was missing from 1st 2 episodes as well. Seems the house is heavy on “beautiful people” Eye candy wears thin in a few weeks. As a man it’s going to be a very good few weeks though. Sure the ladies would say the same. 😛

AD annoyed me the first night, because everyone is in one room, and then the next night, they focus cameras on yet another big group (meditating, which to watch is not entertaining). I don’t record AD to watch the group talk to each other, but to have the cameras go in on pairs and small groups conspiring, so i can get a much better feel for the HGs and where they stand. If they are all standing in the same room, what’s up with that?

In any case, last nights recording was better, at least I saw several conversations with several different pairs and groups. makes me wonder are they responding to complaints.

also hating the bow ties. zach is growing on me, he doesn’t seem as bad as he claimed to be. And how many days of Caleb asking everyone except Amber if he should talk to her, or if she likes him. The longer he does that, the more is going to get back to her, and the less likely she is going to find that attractive. i like the subtle budding romances, like Nicole and Cody (or Zach).