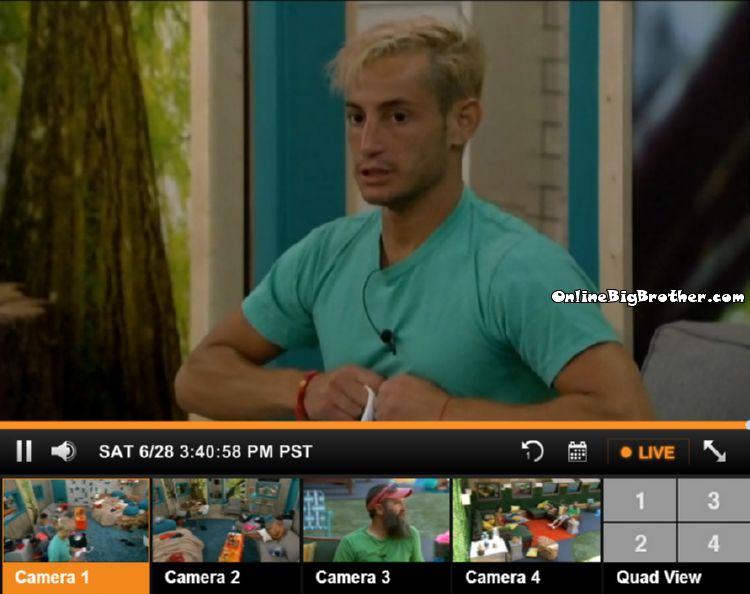 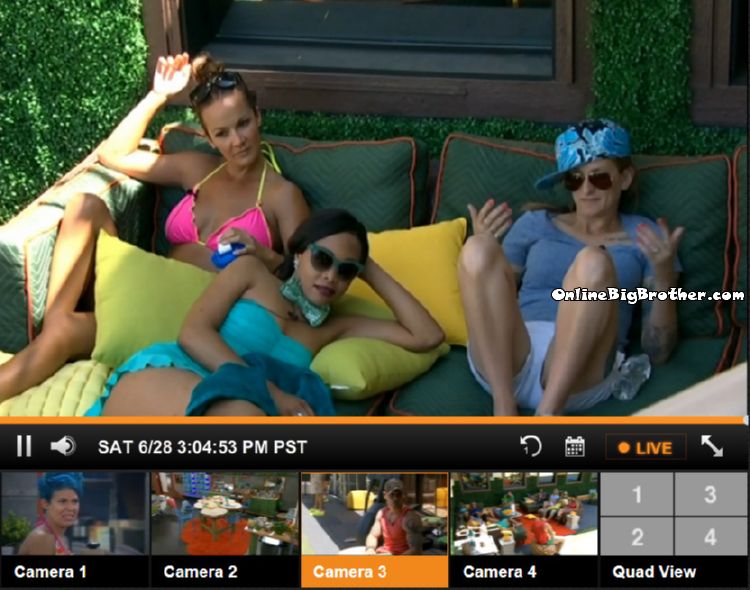 3:05pm BAckyard Jocasta has her BOW TIE one piece on. Most the houseguests around the backyard couch or playing pool. Random chit chat 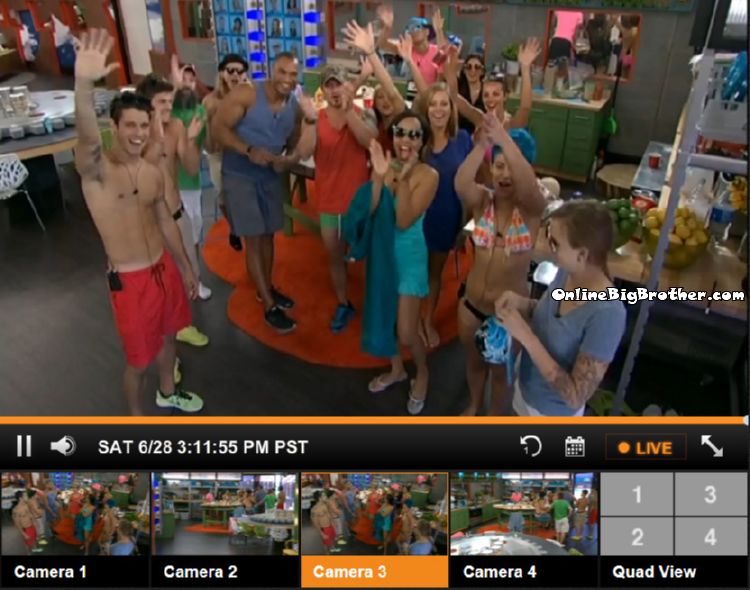 3:13pm Houseguests get together and yell “Happy birthday Jaden sophia” 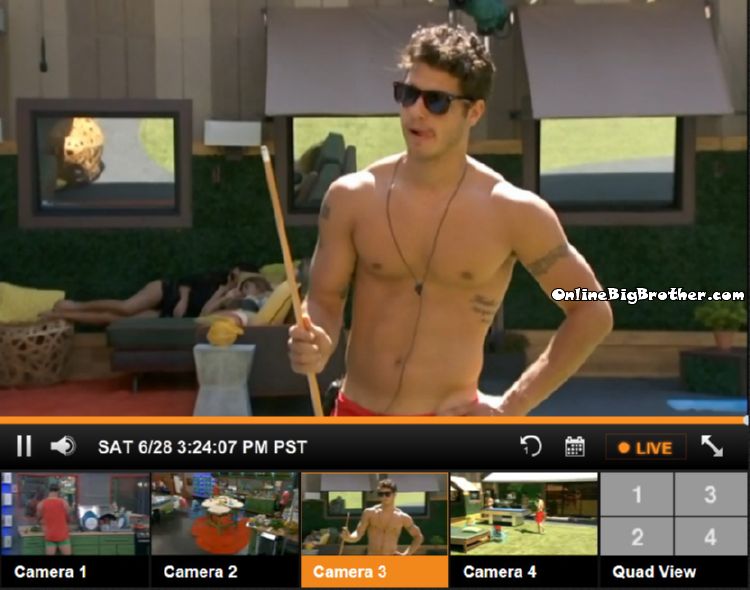 Joey talking about her relationship back home. She says her boyfriend had proposed to her before but only did it casually last year. “I will be a married woman hopefully by next year.” She adds she’ll be officially engaged by the end of this summer. They start talking about kids Joey thinks it will be amazing to have a “Little person” with her man.
Joey – “I could definitely see a little girl or   little boy coming out of that”
Joey – “I want to at least make it to the jury house.. at least all the effort would be worth it”
They continue to talk about her boyfriend, break ups, couple counselling etc etc.. 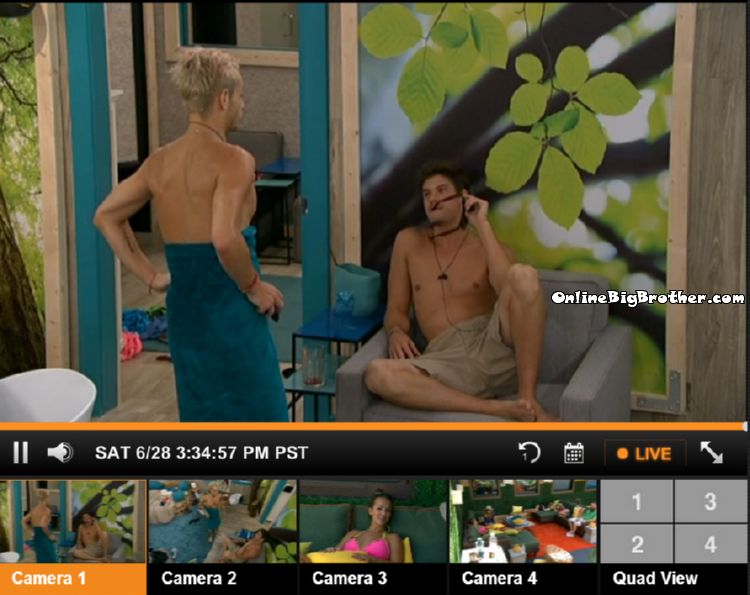 Agreeing that Joey put the target on herself and the entire house now wants her out. They are not seeing POW POW being a threat in this game and believe it would be a waste to evict her.

Frankie – “She can’t spell a word she can’t stand she can’t swing she can’t do anything”
Frankie – “We’re going to have to send people home”
Zach – “I can’t believe we’re in an 8 person alliance”
Frankie – “lets do it 1 down 8 to go” (NON bomb squad members)
They agree it’s still really early they still can change the replacement nominee but right now it’s Joey.
Zach – “Someone might still shoot themselves in the foot”
Frankie says Joey has a sense she’s going up she started saying it last night.
Zach didn’t know that.

Zach says he keep getting closer and closer to Cody but assures Frankie “I’ll have no problem slitting his throat” Zach reports that Derrick is along for the rid and is cool with him right now.
Frankie thinks the bomb squad has a chance to make it they just need to keep their cool.
Zach is worried about turmoil a potential civil war, “If everyone does their roll.. but it  never works out that way”
Frankie agrees thinks they are just best to ride the bomb squad as long as they can.
Zach says week four if he has power he might make a big move. They both think the bomb squad will last for the first 4 weeks.

Frankie jokes this week should be “Devin and POW POW”
Zach laughs “Backdoor Devin”
Zach is worried Amber will let it slip about the bomb squad. Frankie isn’t worried – “We are never f***d.. it’s fine.. they are playing a big hard sloppy game.. we’re not” Frankie thinks as long as a Bomb Squad is in the HOH room they will be fine.
Zach – “we’re at the bottom of the pecking order which is usually bad but this time it’s good” They think if the Bomb squad is exposed they are low enough to distance themselves quickly.
Zach – “I keep thinking what is the worst that can happen and nothing comes to mind”
Frankie – “Brittany and POW POW win HOH”
Zach –  “noms will be Caleb,  Devin, Cody, Me”
Frankie – “probably.. those girls are out for blood they are not kidding and they do not care Brittany is out to get it”
Zach – “she sure is man”
Zach – “there’s no way in hell POW POW wins HOH”
Frankie – “she can’t stand maybe it’ll be random crawling towards objects and if you manage to touch one magically shaped like a veto you win”

Zach – “My plan this week is develop my relationship with Cody and Devin,  that is my side alliance”
Frankie – “not really a side alliance .. side alliance means on the side this is a internal alliance”
Zach – “ya you’re right..”
Frankie says it’s like the brigade but their internal alliance will start to be revealed early
Zach is worried Victoria will put him up she has a chance to win HOH.
Frankie – “I have Victoria on lock, I have no control on Brittany.. victoria loves you”
Frankie says Victoria hates Caleb.
Zach – “Caleb is a animal someone will put him up”
They agree Caleb is the best at everything and is a HUGE threat in the game.
Frankie – “He’s literally the ultimate human being.. he’s captain America he can jump out of a plane and not die”
Zach -= “He can do anything, He danceing, sings, hunts he was deployed to Baghdad”
Frankie says he  is 95% sure Amber will f** up the bomb squad “Caleb is going to go ballistics”
Zach” f** up how “
Frankie – “by not doing what Caleb says.. he’s blinded by love”
They both want Amber and Caleb to have a showmance it’ll help their alliance and the show.
Frankie says Derrick is a good guy for them to keep close because he’s calm and has a calming effect around the house it’ll make things easier.
Frankie says it’s going to be Amber Devine or Caleb That go first in the bomb squad.
Big Brother 16 Live Feeds Subscriptions, if you don’t have them yet what are you waiting for! Free 2 day trial .$26.99 for the season pass or $9.99 for the monthly pass Try It Free! Subscribe now to the official BB16 Live Feeds 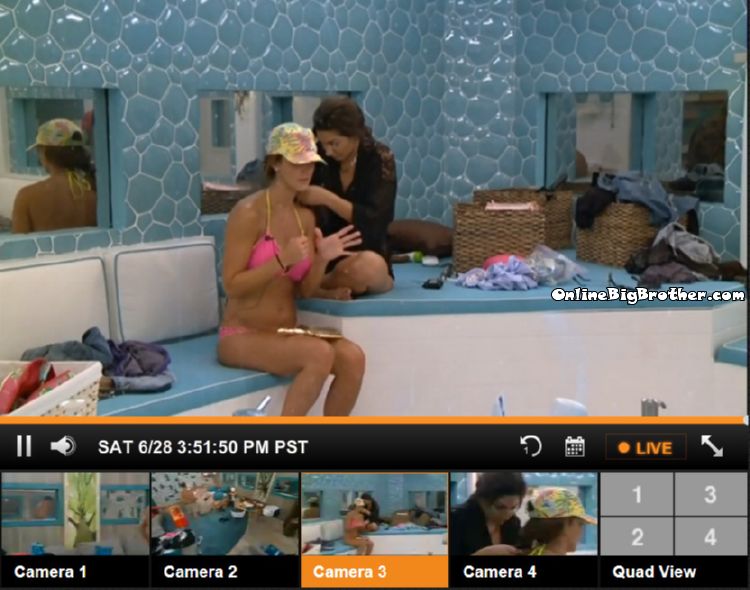 Brittany says the beginning is tough because you feel like you are backstabbing people. Brittany feels bad having to vote someone out this week.
Victoria – “Everyone takes it personal especially when it’s against them”
Brittany – “Of course”
Victoria tells her to lay low right now.
They are both worried about these nominations.
Brittany says if Devin goes up Joey, Derick, Nicole Christine, Frankie will vote to evict Devine
Victoria doesn’t think he’s going to put Devin up early on
Brittany says Caleb is pushing Joey on everyone because of that whole girl alliance thing.
Victoria – “it really wasn’t an alliance it was a joke”
Victoria ‘ _That is why he’s going to use against her that’s crazy.. he doesn’t want to start the fire”
Brittany – “it’s because he doesn’t’ want to put up Devin”
Brittany says she’s not voting out joey
Victoria “same.. she is the happiness of this house”
Brittany – “I adore POW POW but if POW POW makes it this week she’s just going up the following week because the guys are not meshing with her well” 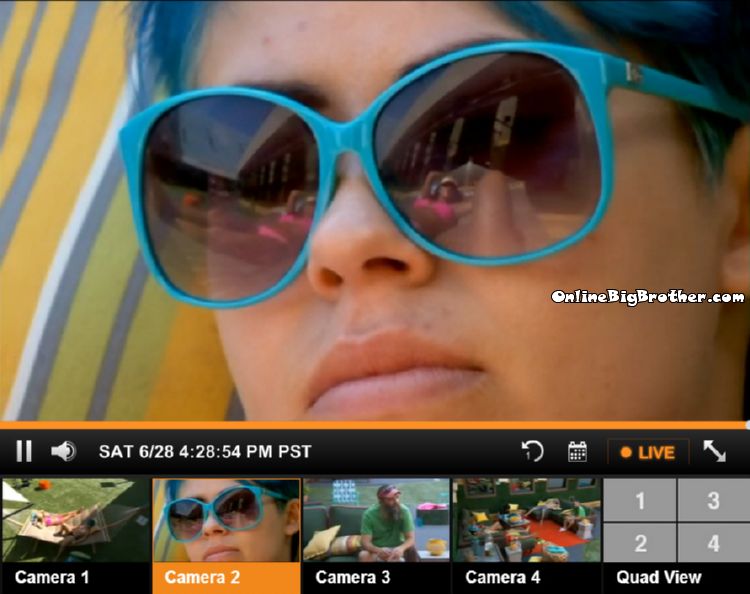 Joey – “I’m thinking about doing a speech.. when everyone is in the kitchen i’ll get up on the balcony”

Joey – “Hayden looks gorgeous he’s a 21 year old version of my boyfriend”
Brittany – “Cody is so adorably.. he’s so funny he’s the perfect child I hope my boys are like him how he talks about his mom he’ so respectful”
Joey ask if she would date a guy as young as Cody.
Brittany says even guys her own age are too young she always dates guys older she says even 33 is too old. “I don’t have time for the games”
Brittany says the guy she’s dating looks like Cody, “He’s the most beautiful person I’ve seen in my life he’s 37”
Joey – “does he have kids”
Brittany – “no”
Joey – “oh nice where did you meet him”
Brittany – “I can’t say.,., actually on instagram… he’s an actor.”
Joey asks if he’s in anything she would know. Brittany doesn’t want to say because he never signed papers and she doesn’t want people to bother him.
Brittany says Devin is stirring the pot constantly, “It’s so early on to have someone do that.. He’s already made so many people uncomfortably and he’s a beast it’s a given”

Brittany is worried that Caleb will go far in the game. Devine is so big it will work against him.

Brittany – “I think Derrick is legit.. I don’t think Derrick is really feeling Devin I talked to him last night I think everyone has the same feeling about Devin except for Caleb and Amber” 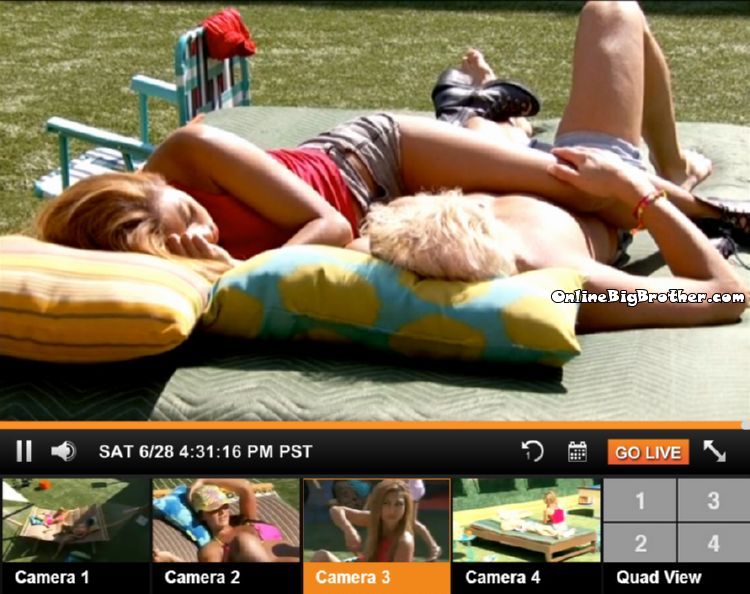 4:33pm Backyard POW POW and Frankie
Frankie – “You looked so cute today your little n1ps”
POW POW says it looks like she has big Satalite n1pple$
Frankie – “All these boys walking around with their mushroom t!ps around here it’s unbelievable”
POW POW scared about this weeks eviction.
Frankie says he’s got her back theres no reason for her to be scared 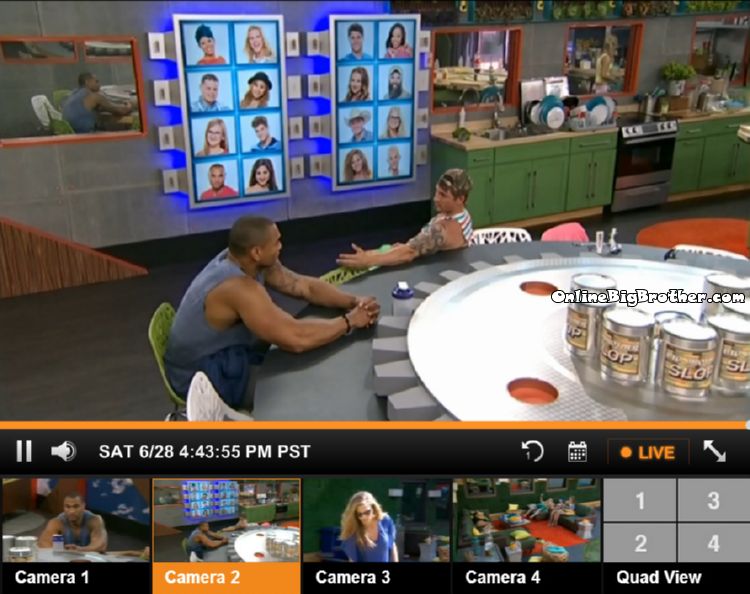 Devin – “I had a good workout duyde”
Caleb –  “I think i’m going to have to stay away from Amber.. I’m getting too attached to her you know what I mean I’m starting to to really like her”
Devin – “please don’t start that now bro”
They start laughing
Caleb – “she’s in our alliance”
Devin – “Leave your heart and emotions at the door”
Caleb nothing bothers me
Devin says if he has a showmance with Amber once someone else wins HOH they put both Calab and Amber on the block, “Keep you eye on the prize”
Christine walks by they ask her if there was ever a showmance that mad the final 2. Christine says no the closest was Amanda and McCrae. Caleb- “That right there is why I wouldn’t be in a showmance.. Sure I want to get to know Amber”
Devin – “You can’t even make it look like a potential showmance”

Everybody’s talking about Caleb’s obsession with Amber, I think Brittany is more obsessed with Devin. She can’t stop talking about him and that’s going to be what does her game in.

If Joey leaves, I’m going to light candles to morn the loss of the best butt on BB history. Atleast she’s actively trying to stay, there’s some hope for the booty.

lol…I’m a female and have to agree she does have a great body/booty.

I think Paola is going great in letting people think she is not smart and not a good player. THis is what will save her this week.

I like Caleb, but he is too stupid not to put up Devin. Devin will be coming right after him.

I hope next week Frankie and Zack goes up on the block.

i’m holding out hope for joey to survive, it’s still 5 days until the eviction. as hard and fast as this crew is playing, i predict something will shake up the house between now and then. we’ll have to wait and see – fingers crossed.

Caleb get over Amber already, yes she’s pretty but this isn’t the Bachelor, you’re here for the money. Lol is it just me or is this cast a little too tame and teachers pet to make up for such a vile awful cast last year.

Frankie sure is covering all his bases! I hope he doesn’t turn into a Cheese nibbler like Andy..

Joey has just stirred the pot! She made that announcement and asked everyone to talk with Caleb to be sure it is a true house vote. I don’t know if this will save her but I’m glad to see she’s not just going to sit back and let it happen. Devin’s not happy and he can be a loose cannon so it looks like there is drama to come…

I just want to say… WHAT A BORING 1rst week! waste of twists! this is BB12 all over again , Saboteur and Team America twist FAIL! Joey and Annie you girls have a lot to talk about xD

I’m just wondering how is this team america twist is going to work if Joey gets voted out?