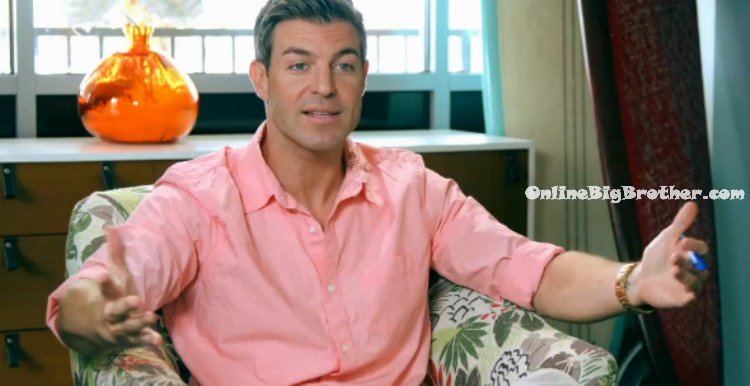 Jeff Schroeder announces that he is in Huntington Beach, California to interview former fellow house guests Dominic and Daniele. Daniele Donato first appeared on Big Brother 8 with her Dad Evel Dick Donato. She then returned to compete on Big Brother 13 which is where she met newbie Dominic Briones. After the season concluded their friendship grew into a relationship and married on January 19th, 2013.

If you would like to watch this interview it is available as part of the live feeds bonus content:
Subscribe to the Big Brother Live Feeds 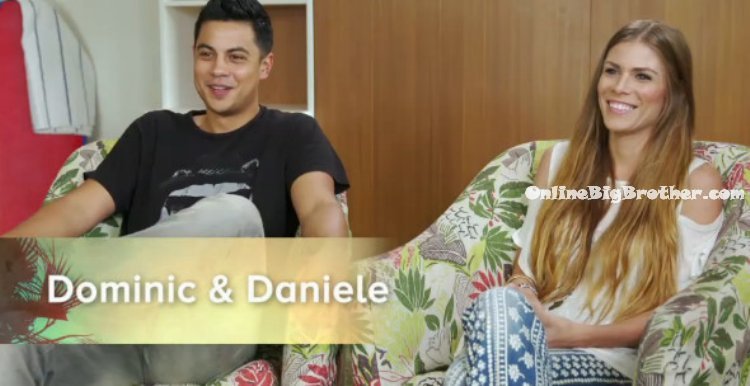 Jeff asks them how they met after the show because I was on your season and didn’t see this coming at all! Daniele says neither did I. Dominic says yeah nobody did. Afterwards I was just spitting game! I was laying it down Jeff!! Daniele says that Dominic gave her an ultimatum – She says he said “Either you date me OR I don’t want to be your friend!” Dominic says I did say no friends! I cut that right away! No friend zone!

Jeff asks so what are you guys doing now? You live out in Huntington. What do you do for work now? Dominic says I am working full time in a private house / an executive assistant kind of a thing. Jeff says okay, sounds fancy! How about you Daniele? You’re in school? Daniele says I am in school … for art. Hence the museums. Jeff asks what does it entail? Like do you have to learn all the artists? Dominic says she’s very humble about it, but she is very good. She really is. Daniele says my major is art education so I am attempting to eventually teach art.

Jeff asks do you guys keep in touch with anyone from your seasons? Daniele says well Eric Stein from my season and Annie, probably the most out of everybody. They’re my good friends. Jeff says oh okay, and Annie wasn’t even on your season though. Daniele says yeah she was on BB12.

Jeff says I know you guys have been married two years, and the last time we talked – we talked a little bit about you guys having a family. And you guys said big DOM was all for it. Dominic says Big DOM is down. Jeff says okay Dom is down for a family so where are the talks now? I know you’re in school and things are crazy but is there talks of possibly having babies? Daniele says I have guilt trips daily. Dominic says we have it planned out to the day. Daniele says it is sad and true at the same time. Jeff asks when are you guys thinking about it, can you reveal? Dominic asks Daniele are we making a big reveal right now? Daniele laughs. Dominic says we’re planning it out so that right when she graduates she pops it out right afterwards.

Jeff asks Dominic how did you propose? Dominic says we were going across country and… Daniele says we’re big road trippers. Dominic says and we like penguins because they mate for life. Did you know that Jeff? Jeff says so cute! Dominic says I know! I looked it up! Jeff laughs. Dominic says so there’s a zoo in St. Louis and there’s a big penguin habitat. So I contacted the lady and she brought us back behind the scenes to bring penguins out in a room to play around with us .. and I got down and that was it! Jeff says that’s nice! I’m getting a little misty!

Jeff says for the most part you guys just keep out of the public eye.. and you guys are a big part of the show. You’re the second couple out of the show to ever get married, correct? Would you guys ever go back on big brother if asked!? Dominic says oh yes! Money, Money, Money! Jeff says so you’re definitely back! We know that! Jeff points to Daniele. Daniele says would I? Absolutely! Dominic says hell yes she would! Jeff asks would you guys go on Amazing Race as a couple? Dominic says hell yes we would! Any of those Big Brother and Amazing Race that’s all strategy.. that’s all her! Daniele says I’d be evil, I’d be like giving people money for their cabs to go and stealing cabs. I would totally be that person because I think it would be funny. 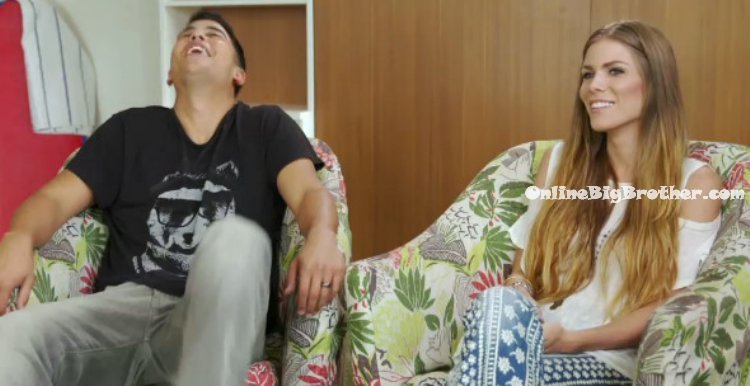 Jeff says okay you guys told us a little bit about yourselves now we are going to see how much you know about each other. They get dry erase boards and have to guess what the other would answer about them.

What traffic sign best describes Dani on a bad day? Dominic writes YIELD. Daniele writes U TURN. Jeff asks why did you put U Turn? Daniele says because he should just turn around and go away. Jeff says WOW! Dominic says on a bad day its very true Jeff! 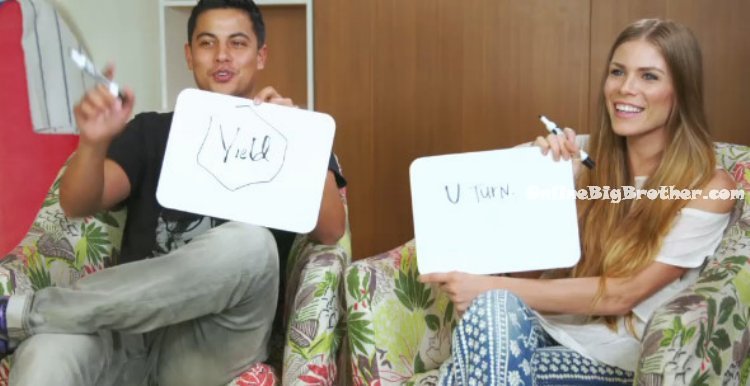 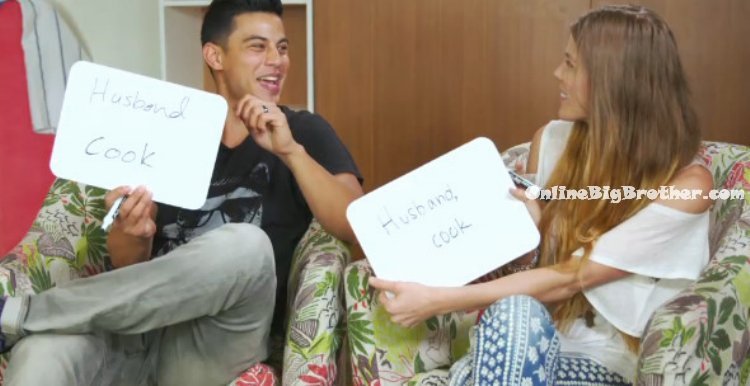 If anyone in this room could play big brother and win but their name can’t start with “D”, who would it be? Dominic wrote Big Jeff the golden boy! Daniele wrote ME! Jeff says clever answer! I like yours (Dominic’s) better.

Jeff thanks them for coming and catching up with him and the fans at home. Dominic says hell yes big Jeff. Daniele says thanks for having us! Jeff tells the fans don’t forget to watch big brother all summer!

Is it just a coincidence that Dominic & Daniele were interviewed or is Big Brother refreshing our memories because they’re going to be on Big Brother 16?

Hey guys here’s some pics of the new house:

THANK YOU SMG HOOVER! You’re the best! I just changed the photos and credited you and twitter user 08Jayhawk