Confirmed Liza and Tom are evicted

On the block for eviction tonight are: Thomas Plant and Liza Skinner.

Who do you think will win?

As tonight’s vote is an odd number of house guests voting Gary will not need to break a tie vote.

By a vote of 8 to 1 TOM is the fourth house guest evicted from the Big Brother Canada House! 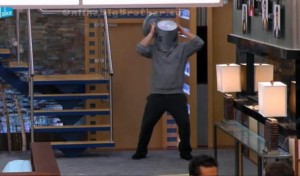 HEAD OF HOUSEHOLD WINNER: ANDREW
** Alec threw the HOH competition to Andrew. Before the question was even asked Alec held out his hand to shake Andrews hands, then when the question was read he told him the answer. Andrew buzzed in and shook Alec’s hand. **

Second HOH Winner is: ? ** This second HOH competition will be held tomorrow (March 22, 2013). Check back here on OnlineBigBrother.com to find out the SPOILER results!**

What does BIAM stand for?

you ever watch trailer park boyz?

If the spoilers are true then I’m not happy. One of them (Tom and Liza) going home this week is okay but both, no. I wanted Liza to win HOH at least next week just to see them all start talking to her again and scrambling.

The villains are gone, so who replaces them?

I want a division in the house, for entertainment purposes obviously, with Gary, Topaz and crew on one side and Emmett, Peter and crew on the other.

More things I wanna see: Alec and Topaz turning on each other in different alliances, let’s see who wins.
Suzette winning HOH again. Yes I know you guys hate her but I want her to win an HOH
Topaz also winning HOH

Hopefully it’s Tom then Gary/Topaz (either would be fine with me). I actually don’t want Liza to go home!! I ship Liza and Peter! Also, does your live steam work with an ipad? Because I live in the US and I definitely don’t want to wait until tomorrow to watch!!

Tonight might not be as Drama filled as I had hoped.. oh well the house will split up this weekend and we’ll have a new bad guy .

If the unconfirmed spoilers are true, it will be a super show for me tonight…I will be grinning from ear to ear the whole hour. I don’t fear that it will get boring. These are great houseguests who will keep on entertaining us. Yay for BBCA 1!

Apparently there is another twist coming..
it’ll save Suzette again and have the potential for another POWERSHIFT

I hope these are true but i highly doubt liza will win dispite her arrogence she really isn’t good at this game! I no more believe liza will win hoh then talla will.

I think they are true

All that will happen now is friends turning in friends, and that is always good times.

yup pretty much things are going to get ugly

Noooooooooooooo!!! I really wanted Topaz to stay in the house. If the spoilers are true than I really hope that Andrew will put up Liza & Peter! Sadly, I don’t think he will :( UGH …just want Liza to leave.

Feeds are back up. It seems like the second HOH hasn’t been played yet as they are talking about tomorrow.

Where does it say topaz left??

Sorry! In my haste I saw the list of predictions that you posted & I thought those were the actual spoilers. I was worried that Topaz left the house & Liza stayed. My mistake!

No worries.. there was a lot of Spoilers/prediction all over this post

I wish Topaz left. That girl has some major atitude. Someone needs to take her down a few pegs. I guess she has to wear the pants for both her and Alec.

I hate this show now. I can’t stand Topaz, Alec is a baby. Peter is an idiot. Jillian doesn’t know what game she is in. Emmett with friends like him you don’t need enemies. Gary just bugs me. Talla I can’t understand her. AJ is a fool and Suzette needs some respect. Andrew I guess it is up to you since you bug me the least.

As much as I want both Tom and Liza out, I can’t really see much drama without them.

This cast? There will be.

Ok folks, I am apalled with Alec’s ridiculous overly dramatic crying antics…..SEROUSLY man, you have HEAVY ‘make out’ sessions on camera constantly with Topaz, and walk around all day everyday without your shirt on….and yet you’re CRYING because your ding-a-ling was exposed…. GET freaking grip man, you are a wimp!!!!!!!!!!!!!!!!!1

He wasn’t worried about his “career” when he was making out with Topaz on camera! Some people just like it when others feel sorry for them. He’s a backstabber, I have no respect for a man who can’t keep his word.

the show is fucked. I cannot get over the fact that my Liza is gone :'(
It’s gonna get boring

I am streaming the episode right now and I just have to say that Alec in the Diary Room speaking about the shower incident broke my heart.

This game is going to be soo boring now. I don’t even like any of the rest of the houseguests. Really couldn’t care less who wins, they are all equally undeserving.

Thete will be drama. Once they turn on each other.

Yay! The hard core “mean” twins are g-o-n-e! So many of the rest are quite funny…so I’m happy with that!

Well maybe Tom found a dpov lol all i know is one season on bbus they brought back evicted hg was it racel so for ratings sake it may happen again….

Nice classy exit by Liza! I wasn’t a fan of hers but I think she might just be a victim of what happens to some people in the BB house –the lack of stimulus seems to make some people a more intense version of who they thought they’d be when they first came into the house…

I would love to see the look on peoples face in a few weeks if they brought both Liza and Tom back, after everyone else starts to turn on each other. they have to wait until the real back stabbing begins.

I think it would be cool to see Topaz and Gary turn on each other….That would be fun to watch!! The Vampire all the way….Go Andrew!!

Now that Gary has pulled a Tom, “I mean a rabbit !” Out of his ass. We’ll just see how much longer it takes him to wipe that silly
Smile of his face. (GOOD BY GARY) It’s been fun having you on the show.

I would like to know what Liza put down Peter’s back. Do you know Simon?