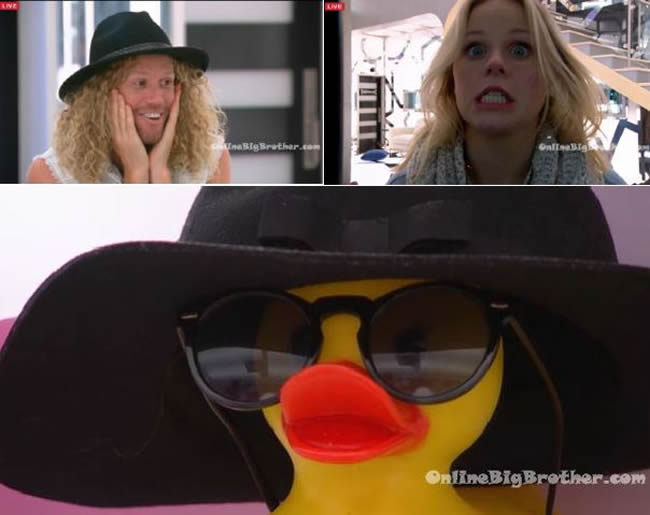 Last weeks eviction episode ended with Arisa revealing the HOH was going to be determined by a viewer vote, where the top two house guests that received the most votes would compete in a high stakes game of chance. The top two highest votes were for Nikki and The Brothers. In the high stakes game of chance (roulette), the brothers ended up winning. As head of household they nominated Maddy and RamseyMaddy and Ramsey for eviction. Ramsey then won the Power of Veto Competition but ended up leaving the house due to a family emergency before the veto ceremony. As Ramsey was on the block and would have used the veto, the brothers had to nominate a replacement nominee. Tim volunteered to go up as a pawn, which suited the Brothers as they secretly wanted to get him out. Yesterday, Maddy tired campaigning for votes by calling a house meeting however it didn’t help her persuade the house guests to keep her over Tim.

On last week’s eviction episode Arisa stated: “next weeks HOH will be a dramatic family affair…”

Thank you – hamsterwatch for the spoilers! 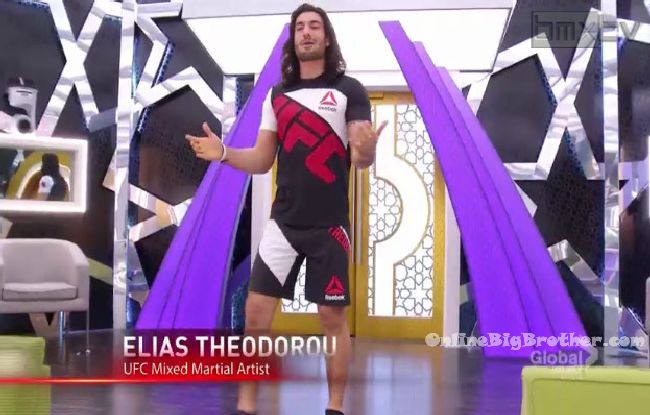 Elias Theodorou (UFC Mixed Martial Artist) enters the Big Brother Canada 4 house to train the house guests. Nikki flirts with him and asks if he could break her in half.

Mitch in the jury house does some BBCAN science and then Raul joins him. Mitch says he’s proud of Maddy for getting 1 (Raul) of the 3 out.

Ramsey joins Arisa on the stage. He says that his father had the surgery and it was successful with 6 bypasses. He says he’s still in the hospital in intensive care as he’s not yet in stable condition. Ramsey then gets to tell the house guests about his father’s surgery. 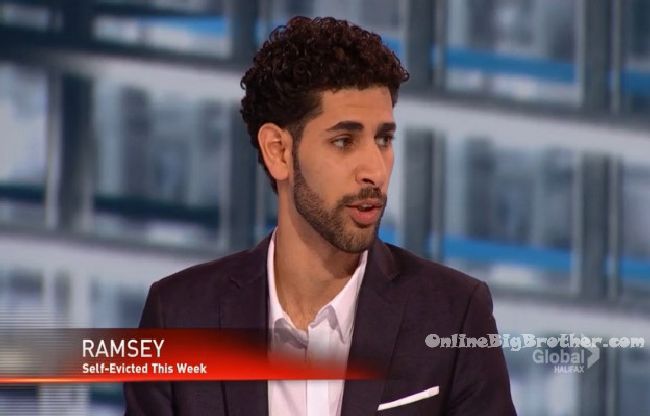 One family member each competes for HOH – The House Guests watch their family members guess when 1,000 rocks dropped into volcano. The winner will get time with family member.

HELP support all the time and effort Simon and I put into keeping you up to date with the live feeds.
Any amount is greatly appreciated and goes directly to paying the fees associated with running and maintaining this site. Thank you so much! Without your support this site wouldn’t be possible!

hope to see Jared and Bros up for eviction this week!

Given how shitty this season has been she’ll end up doing a stupid backdoor plan and Nikki, Joel or Tim will end up being evicted.

Why wasn’t the vote live? Because the house was going to vote for Tim to leave but production wouldn’t allow it. They knew it would appear rigged so they did it on a taped show.

Maddy would have won in a heartbeat.

What next? Hillary becomes president?

Well actually they are always that way. I have found out the evicted houseguest for the last month. So it wasnt so Tim would win.

Besides Mitch and his game blowing up from the twist, the middle is killing it this year.

Can’t say that there are any surprises with the results. Maddy not caring about anything or anyone really throughout the entire game hurt her.

Yep, I guess you could say this about any other player but, if maddy has just relaxed a bit more and made proper bonds she would’ve been ok.

hey dawg
if you had to guess now whis canadas fav ?

Tim or Nikki would win Canada’s fave for sure

So want the brothers to be brought down a notch! Liked them until they bragged how great they are. They are so full of themselves and think they are mastermind players. More like Tweedle Dee and Tweedle Dumb!

Phil was part of the ‘middle’ with Tim/Cass/Joel/Nikki and he basically jumped ship cause he thinks he can get Kelsey if Jared leaves, and he is buying her bull…and Phil has always wanted Jared to be his buddy….he could have kept in the middle still for some time and let Kels/Jared be the targets, and picked up the leftover of the two…he got both his noms out this week so in a way the bros could have easily gotten off scott free…he should have gone to Joel and Cass and talked to them about what Jared told the bros, instead of trusting Jared who has been talking about getting them out since almost week one…I also can’t stand that Kesley and Phil flirt with each other whenever Jared is not with them…it’s kinda icky *shiver*..The brothers truly burned several bridges just cause Kelsey batted her eyelashes at them….you don’t want to go to the end with a showmance that won’t take ya guys! sheesh

The brothers
Reply to  Anonymous

It’s unfortunate really, I think Phil’s obsession with Jared and his crush on Kelsey are really hurting his game, and more importantly hurting Nick’s. I think Had Nick been in the house alone (or had more of a backbone to stand up to his older brother) it would be a different game for him. Phil has been irrational and emotional and the face of the Paq’s brothers. Even in the earlier part of the season, Nick seemed more inclined to work with the middle or Dallas while Phil was chasing Jared around searching for gratification. A mistake for sure.

Actually, it isn’t Kelsey that Phil wants. he wants to be Jared’s number one so bad, he will vote Kelsey out just to open up the possibility. He’s never wanted Kelsey the way he wants Nikki, not sure why anyone continues to even think he does. He’s crushed on Nikki for ages, and he has a serious bro crush on Jared that defies logic for someone who actually has watched BB US and Canada for so long. However that is kind of his downfall, he knows the game, and wants to be remembered for an alliance. He’s been puppying around after Jared to be in an alliance with him since the beginning. I think one reason the brothers decided to not vote Kelsey out was to lock in good karma with Jared.

That failed, and many other attempts failed. Now they are pretty much the only people left in the game and they think Jared likes and wants to work with them, but I don’t think he does still. just playing the part that kelsey told him to play. for some reason they and others think jared is a great chance to win BB, but he literally has not done anything much. He won an HOH because kelsey pretty much won it for him, and he won a POV because Raul literally gave him directions lol.

i kind of think that cassandra and/or joel could easily take him to the end and win. You aren’t making good social game when you spend all your time spooning one person, and don’t break off from that person to talk to other people. she still makes him weak, so she’s worth having around until he goes.

Of course they build this HOH up all week and then it’s only another 30 second preview and wait till next episode. Awesome

given that the hoh comp was taped by 5pm, and in the 30 seconds we saw at least 9 rocks fell into the volcano, the comp would take around 60 – 75 minutes to complete given standard breaks for additional challenge/rewards.
So, what have they been doing for the last 3 and a half hours?

The only thing that annoyed me about the episode is it didn’t show the effect Maddy’s info had on Cassandra where Tim is concerned. For that matter, it barely showed Tim’s nervousness and overboard motherhenning today.
Too bad. I guess the edit has to make it look like Tim is beyond such mortal concerns. It didn’t show his HOHitis three weeks ago either. Must be in his contract.

It will probably be shown next episode

I don’t think the Bros. have been part of the MIDDLE for a while now. Tim/Cass/Joel/Nikki have all been playing the game without the bros. Tim/Nikki and Tim/Cass/Joel have final 2 and final 3 with each other. The brothers were the disposable part of the middle. Every once in a while a bone would be thrown in their direction, but other than that they have been excluded from all the game talk and decisions. Joel has been playing both sides between Jared/Kelsey and Tim/Cass. Nikki just wants the HOH room and Vodka and don’t think she realizes half the time that she is in the house. They put up Maddy/Ramsey because Tim talked them into it. Their antics aside, they didn’t feel a part of the middle. Tim didn’t tell Phil that Joel, Nikki, Cass and himself would vote Jared out. He just hinted that all might not be as it seems and left it at that. Phil was afraid he would make that move and Jared might stay. If Tim had opened up more about the votes maybe Jared would have been going home tonight, but Tim couldn’t expose himself that way and have the brothers know game was going on behind their backs. Then to have Kelsey/Jared tell them that Cass has been campaigning to get them out for weeks just put the icing on the cake.

the brothers never gave anyone anything as far as true loyalty or even info for the most part, (I think that having your sibling in there maybe made it harder in the sense that they never needed someone else to bond with on any real level.)..hence they were at the bottom…their own fault really..sometimes playing ‘too safe’ isn’t good either…they never really made any real connections in the house…so no one will be trying to help them cause they are flip floppers…tried to be with the middle then with /Rams/Maddy and now Jared/Kels…

Ironic that Cassandra has to have a parent come and actually win for her.

I actually don’t think Cass would have wanted to win. This is funny because she’s been playing the whole house and her noms will out her true intentions.

Cass is probs going to put the bros and jared up

Y family members have to compete. So funny lmfao

Lmao. I wrote an earlier post stating whoever win hoh goes home the next week hoping the brothers would go home. I also speculated who would be the target based on the hoh. So funny because I didn’t include cass and Nikki. Go cass continue with the pattern of sending home last weeks hoh. Also, so hope Kelsey is a have not again.

First I congrats Cass for being so dumb in this house but then I have to give her Kudos for having a Dad that is so smart…..

Should be once again a crazy week of BBCAN…