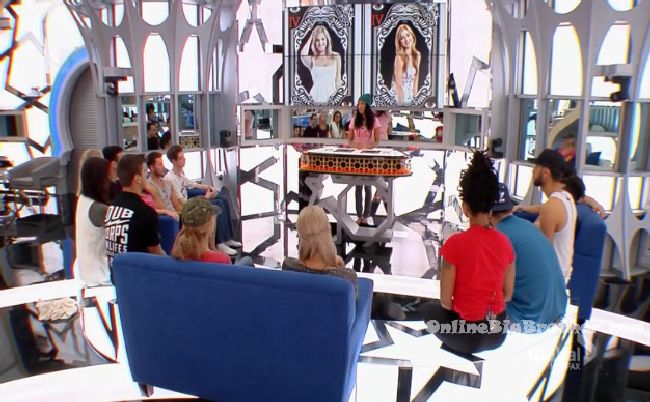 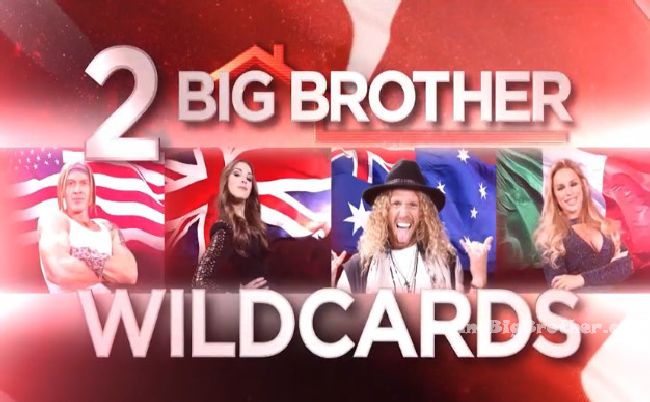 As last weeks spoilers had stated Philippe Paquette brother Nick also joined the cast to play as one house guest. If one is evicted, they go together. If they make it to the end and win, they will split the grand prize. They also only have 1 vote and have to alternate back and forth between competitions.

We learned that Marsha the Moose is back and will be popping out of the alter in the “little chapel of havenots” room at some point in the season.

At the end of the first episode the house guests competed in the first HOH called “One Night Stand”. Arisa had the house guests vote on two questions prior to the competition. Joel was voted least likely to win so if he isn’t the first one to fall off he will get safety for the week. Nick was voted most likely to win. If he doesn’t win he will be stuck in isolation for the night. Cassandra fell off first and therefore Joel won safety for the week. Near the end of the competition Nick fell off and sealed his fate having to go into isolation for the night. Loveita ended up winning by promising Jared safety if he dropped out.

One (Or two if its Nick or Philippe) house guest will be evicted!
Don’t worry if the evicted house guest is your favourite as they’ll likely get a shot at returning.
The results of the Wildcard voting – 2 will enter the house tonight.
Plus the next HOH Competition is played but we likely won’t find out who the winner is until the live feeds get turned on.

On tonight’s episode:
Nick and Phil are locked in the “high roller room” for the night due to Nick not winning the last HOH when he was voted most likely to win. 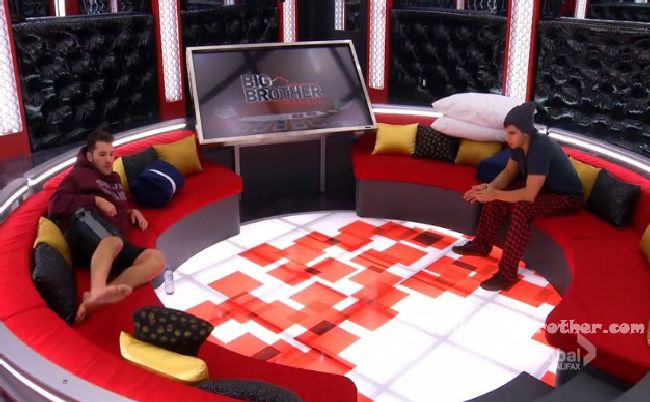 Loveita tells Paige that she’s going up as a pawn. Loveita then heads into the high roller room to make her nominations. Her short listed house guests are Kelsey (due to her budding romance with Jared), Cassandra, Christine, and Paige. 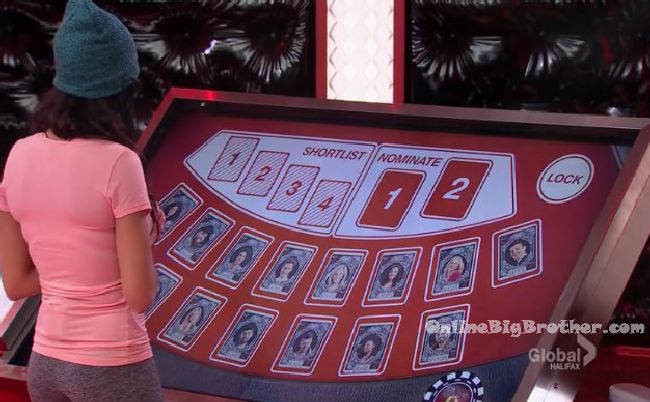 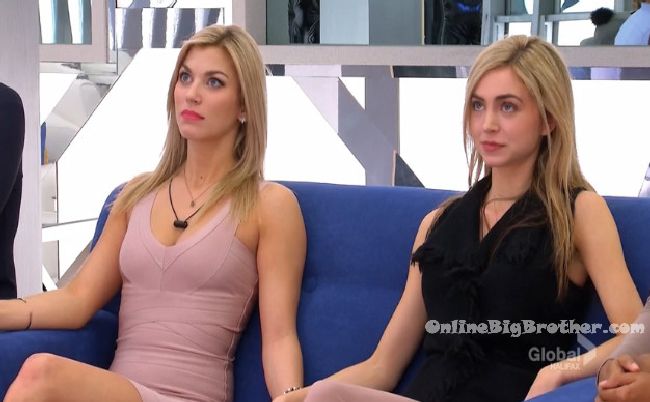 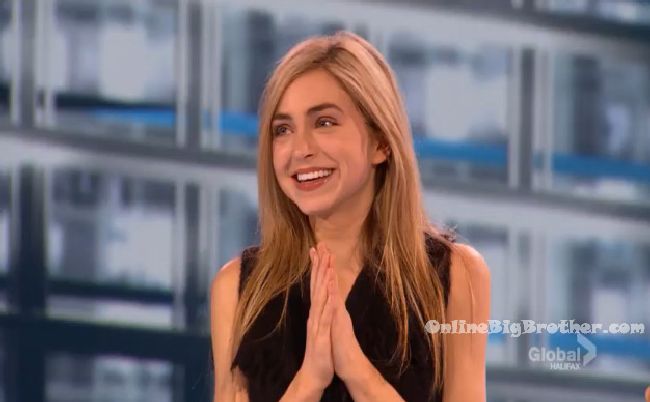 just saw the spoilers. pretty sickening really. she set an early notice of the kind of player she is going to be. i dont know why the girls are always set on getting rid of each other. why cant girls just get along, why do they always have it out for eachother?. feel bad for paige. if this is honestly the way things will be im not looking forward to it. i blame myself though for hoping for something different and getting the same thing

i am happy the brothers got through though. would have been easy to get rid of them too

Are there no eviction tickets this season? They usually have links on the website when to get them but I haven’t seen one for tonight’s eviction. :(

Although anyone can nominate anyone, for some reason Loveitas 4 options being all female make me wonder. I hope I’m wrong, but some women just don’t like any female “competition at all. She may feel she can manipulate men more easily. Or she may have real reasons(cough!) for these 4 women being so scary to her.

really dont see how anyone could find paige intimidating. loveita is just the usual catty thing they always cast

why? kelsey is slutting it up to stay. you are embarrassing kelsey!

why? kelsey is slutting it up to stay. you are embarrassing kelsey!

Bad calls around for the first HOH.
% chance girls alliance= 0 (little surprise there, but all 4 possible nominees?)
Never tell someone they are your target if you think they are already working the showmance angle. That’s creating 2 enemies.
See a bunch of people talking? join the conversation, don’t go to another room to ask what’s going on. Maintain control.
Pawns go home.
Oh well.

Loveita telling Kelsey that she is the target has been a VERY bad strategy on Loveita’s part indeed.

Hey you are my target! i don’t care that pov players haven’t even been picked yet!

Isn’t it too early to use a pawn?

Yes Nikki made it in. My favorite BB player of all time.

google “who is she nikki”

Who is SHE, is one of Nikki’s Famous moments

Why would you put a target on your back by getting into a showmance this early? So stupid!

One could also ask why Loveita thought it was a good move to target a showmance so early and tell her target that she was up against a pawn lol.

the look on every hg’s faces said a lot when the internationals were introduced.
nikki: cast says who?
veronica: the valley of the blondes go into tiger mode with their eyes growing four sizes in seconds. telepathy response: bitch.
jace: who’s the bad 80’s samurai douchenozzle manbun oldguy?
tim: did someone say Australia, yay!
I truly think they’ve never watched anything except the first three seasons of bbcan… and even then just in the last month.

This episode kinda went how I expected. I was worried for the brothers, but come on guys Loveita has said she doesn’t want an all girls alliance so are we really surprised she had 4 ladies for targets?

I’m actually glad Paige is out first because she was just so young for me. She was a lot like BB4 Michelle. Both let themselves be nominated as pawns. You never do that! Plus having a blindside on episode 2 was pretty freaking amazing! And did every hear Christine?! I didn’t see that line coming at all!

Mitch is showing some potential for manipulation down the road I love it!

Sharry don’t get too close to Loveita! I said it yesterday. When you have a house with multiple strong competitors it is better to oust the weaker players first. Loveita made a mistake in taking shots at a showmance so early.

the cryn btch is in the house!

Seems like this season will be a glorious trainwreck. Loveita is the pre-jury Becky, so……. she is out soon.

Sad that Paige left, but I can’t blame Kelsey for doing what she had to do to stay.

Don’t give a fuck about the internationals. Can’t wait until the feeds start.

feeds up, looks like jared is the new hoh from the sound of it.

the live feeds are up and running !

Feeds up Jared one the HOH

where can I watch the episodes online?

She’s just another boring character with no reason to have been cast beside being in a showmance.

Why hate Kelsey for actually starting to play the game? To my knowledge she’s not one of the newbies who watched the show prior to getting on. She’s working with what she’s got, and it helped save her another week. Paige barely even talked to people week 1. Who does that? I wouldn’t be up in people’s faces, but I would make sure I talked to everyone at least once if not more (probably more lol).

Dawg and Simon is that info true? Is Jared really HOH? If so then Loveita may be in trouble considering Tim and Nikki have a safety pass.

first impression from the feeds:
Jared won hoh.
Christine and Cassandra reminded me of the season 2 bbcan gremlins while catting it up to phil in the bathroom
The brothers are trying to play the power behind the throne game.
Loveita, Sharry, and Maddy are the outsider targets right now.
The guys that voted to evict Kelsey have gone under the radar, to the point Jared and Kelsey think the brothers might have voted to evict her.
If Tim and Nikki are playing as a team they’re doing divide and conquer quite well to talk to all of the house groups seperately. And both are playing dumb to an amazing degree (unless they are actually confused, which is scary).

It’s crying time in HoH room after just one week :)

Live feeders are saying that Jared was voted out. Brothers won HOH put up Nikki and Tim. Nikki was voted out on second eviction! Don’t know if this is true but i think they got the information from Hamsterwatch,