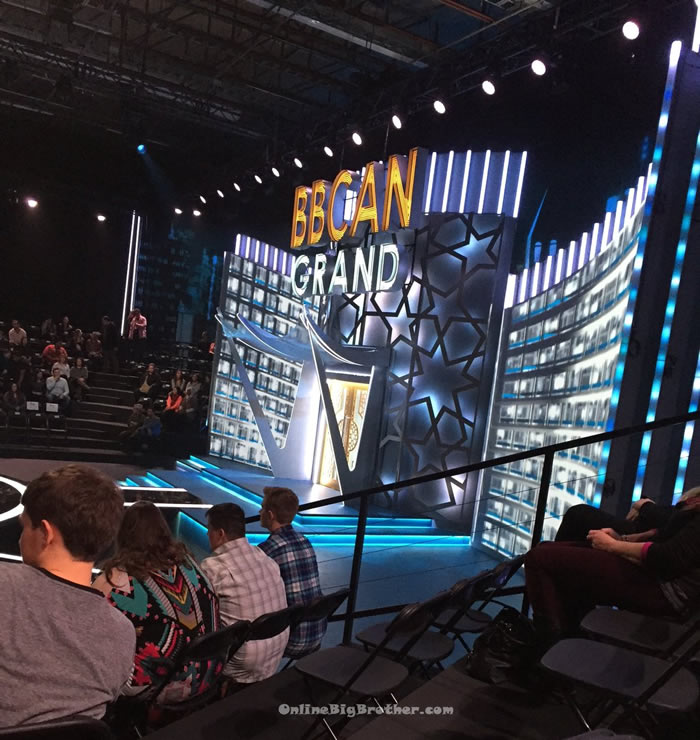 The first episode of Big Brother Canada 4 is beginning to be taped today with an audience showing host Arisa Cox letting the 14 new house guests enter the house in groups. The newly redesigned house still hasn’t been released and won’t be until Monday, February 29th. However, due to having a studio audience of Big Brother fans its inevitable that spoilers about the house and first episode would be leaked. The première episode is still 5 days (Wednesday, March 2) away and if you’re like Simon and I you just can’t wait that long to find out more about the house, theme, cast, etc. Don’t continue reading if you don’t want to spoil the first episode 🙂

A special thank you to hamsterwatch on twitter for posting the following spoilers:

@hamsterwatch here’s a pic of the stage if you wanna use it. You’ll find out Monday but the house looks amazing pic.twitter.com/ruS5LwiMv7

Follow hamsterwatch on twitter as her spoilers are always reliable. Also make sure you follow us as well for all our live feed updates and spoilers: OnlineBigBrother, Dawgs Big Brother

Bbcan always has a nice house

Thanks for the leaks ???? Hope my man Dallas is the first one in and last to leave…..let the games begin ????

” They were delayed because a fan stormed the doors lol! ”

I hope they show footage of that.

I know, I really hope they show that moment too! That’s the first time someone’s tried that.

LOL they definitely won’t though.
that’s just giving him (jeremy: that’s his name) what he wants since he was all like “#team jeremy for bbcan5”
like that’s not the way to get in the show, and a producer there also recognized him before he did that, so he didn’t do himself any favours..

You’re right that is a good point. You really can’t promote that kind of behavior but it would be funny to see the guy crashing the house and all the reactions.

LOL Arisa was like “that was not planned”
cuz we thought it was at first since they mentioned something about a twist and he seemed like the type of person to be a twist (he was kind of crazy)
but afterwards when we saw him get dragged out, everyone was booing them since production had to retake the third group entering the house for like 2 more times because production was probably thinking: “since the first shot was ruined, why not make it perfect”
it was so sad though cuz paige had an amazing first entrance cuz she was sooooo excited and it was so cute, but by the third time, she didn’t show that excitement as much anymore which was unfortunate.

Actually Arlie stormed the door as a joke but I’m assuming you mean an audience fan.

I heard it was some guy who had tried out for the show but didn’t make the cut.
I’m guessing at this point he never will.
I’ve been waiting for someone to fly a drone into the backyard on the US version.
That could be quit entertaining.
Let the season begin …

OH (kind of) SPOILER:
after all the houseguests had entered the house, big brother canada showed the audience like a couple minutes of live feeds while production were preparing some stuff. one clip consisted of raul and loveita talking in the washroom about trusting each other, and then nick (philippe’s brother) came out of the stall (this year is the first year the door of the stall does not show if someone is inside: the door covers the entire stall, like bbus). however, it is unknown whether or not nick heard anything

Should be an interesting season … cheers to all