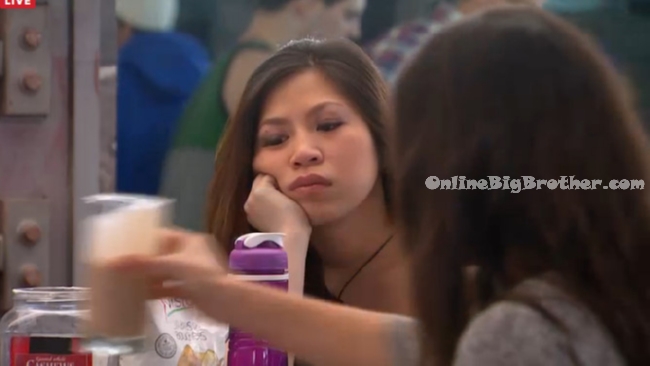 1pm – 3:50pmBig Brother blocks the live feeds for the Power Of Veto Ceremony to take place. As the power of veto winner Kevin chose to use the veto on himself and as a result Bobby the head of household nominated Cindy as the replacement nominee. We all expected this to happen as Bobby informed Cindy yesterday morning that she was going up on the block. Cindy tried to campaign to not go up for a second week in a row but Bobby wasn’t budging. As Kevin was the original target this week, it is very likely that Cindy will be voted out on Wednesday night because of the drama she stirred up.

In the kitchen Cindy is sitting at the bar with her head in her hand looking annoyed she’s on the block. Zach asks Jordan “if you could date anyone from BB history who would it be? Jordan says Nicole Franzel from BB16 because she’s not out of my league. Sorry Hayden.
Meanwhile in the bedroom – Britt and Sarah are talking about Cindy being on the block. Sarah comments that she did it to herself. Britt and Sarah agree that if either of them were on the block they would do whatever it takes to get them off.

4pm – 4:30pm At the kitchen bar – Kevin, Jordan, Godfrey, Britt, Pilar, Ash, Naeha, Cindy, Bobby and Graig are all hanging out. Jordan and Kevin mainly talking about past Big Brother house guests from the US seasons.

Willow hugs Bruno on the couch. They both agree one of them needs to win the next HOH competition. Bruno says we’ve got to get choppin! Willow says she thinks the HOH will be a question comp. Bruno says one of us has to win 100%! I think we have a stacked team. Willow says this is when people start drawing lines in the sand. Bruno says you’re good. I’ve got your back. We just need to stay together and then once we get down to the final ones, then we do what we have to do. Willow says there’s only one of us that we need to worry about and you know who I’m talking about. Bruno says yeah I know. 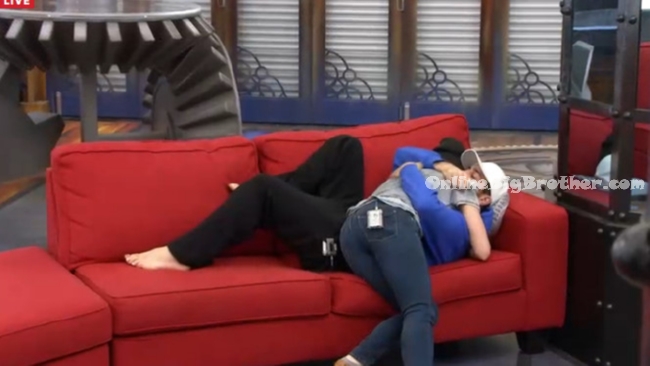 4:40pm Bobby says he is going to be pissed if the next HOH is endurance and he can’t compete. I would kill an endurance. Naeha says there won’t be an endurance yet. Bobby says yeah, I think there will be one every 3 or 4 weeks. They talk about how Risha was 20 years older than most people in here. Bruno says she is 10 years older than me. Bobby asks Naeha how she is? Naeha says 29. Bobby says yeah, you’re old too. Imagine being in here when you were 21 years old. Bruno asks Naeha – Do you think lines are drawn? Naeha says no I don’t think so. Naeha says unless someone comes to me and says. Bruno says he thinks Cindy got robbed. Naeha says its going to be a tough decision. Bruno its going to get tougher and tougher. Naeha tells Bruno that he isn’t on his radar at all. Bruno says yeah bigger fish to fry. Naeha says yeah we should talk one day. Bruno agrees. Wait till the time is good, and then have a chat. 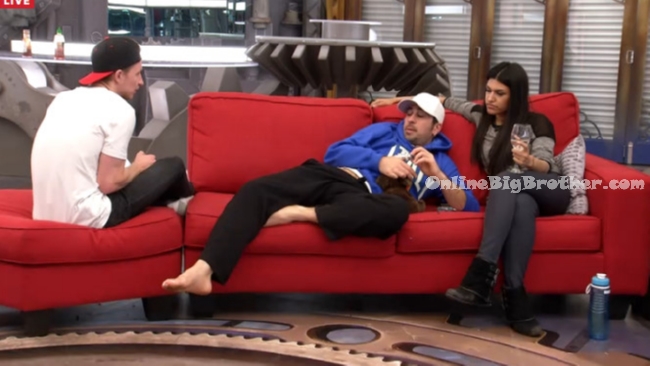 In the bathroom – Cindy chats with Pilar and says she wishes she was on the block against Risha. Cindy heads to the living room and talks to Naeha. Naeha asks you’re going to try right? Cindy jokingly says no I’m going to give up. I’ve mentioned to a few people that, I should be here next week because I would still be a target. Cindy says she talked to Bobby and he said he wanted to work with you. If the five of us can come together and stick together we could go far. I offered Bobby safety and he didn’t take it so.. goodbye if I win HOH. I want to stay to stir the pot. Naeha says yeah why would we risk losing you to get voted back. Cindy says yeah if I came back – Beast Mode Princess.


5pm While in the kitchen – All of a sudden – The house guests start screaming that the ceiling is leaking. Willow asks is that the exorcist?!?! The ceiling is leaking!! They look up and can see a lot of water leaking from a couple of places in the house. The house guests scream for big brother. Bruno runs up to the HOH room and finds that someone left the HOH bathroom tap running. He says Oh my god and throws a towel on the floor. Big Brother cuts the feeds. (The video below captured it all)

Willow "Is that the exorcist!? The ceiling is leaking!! @bigbspoilers #bbcan3 = Someone left the HOH bathroom tap on! pic.twitter.com/Q2T66HamyO

Other camera view of the leaking ceiling:

So apparently Kevin has a girlfriend at home who saw the kissing between him and Pilar and is pissed.
“http://hanlonjordans.tumblr.com/post/114947750586/omg-kevin-has-a-girlfriend-back-at-home-and-shes”

LOL, it’s only going to get worse. Poor thing will probably blow a gasket.

There’s no proof that’s his girlfriend. The picture is pretty innocent, could just be a friend. Or someone he is casually dating.

who’s the one person Willow is referring too here: “Willow says there’s only one of us that we need to worry about and you know who I’m talking about. Bruno says yeah I know”?

another name
Reply to  Anon

graig. the alliance has talked about his hot temper and lack of filter/editing when discussing game outside of chop shop meetings.

yeah… it’s completely out of kevin’s wheel house to do anything to get further in the game for money. oh wait.. that’s exactly who he said he was in his interviews.

Don’t be a jerk dude.

Oh bobby, you’re not that much older than Naeha… I don’t understand why he bags on people because of their age.

my guess would be he bags on age because he’s a 27 year old cellar-dweller with a peter pan complex in a society that has embraced the term cougar in a semi-pitiful butt of the joke fashion. i’ll have to go back and rewatch… but did he stamp an expired best before date on Bruno and Graig’s asses? doubtful. getting off of the soapbox. hope that wasn’t preachy or conceited. not my intent.

If any HG wants to go in the crapper fast be mention by me as a front runner 1st 2 weeks of the season. It happens yearly this season Willow was my unintended victim. Best positioned 3 days ago I said. Not hours later all out game never ending. Playing way to hard.
So no ones getting a great review for a week give or take. Chop shop seems viable atm. The girls aren’t leading which is bad for them. They are mostly yessing their way through each day. Bobby and ash a showmance? We aren’t there yet but I put forth ASHBO as the name. I know you can do better that that. And don’t forget Ashby which might be spot on. hehehe
Brit has handled the block well so I think Cindy is in real trouble. Don’t think Britnee will mess up so only Cin’s persuasion could save her. 1 in 20 chance at this point but reliable guesses on votes for anyone but chop shop pretty difficult. They’re solid plus Godfrey its 6-6 at best bobby breaks the tie. Not much of a chance at this point. By Wednesday might be 12-0 to not ruffle any ones feathers left in the house.

Don’t know if it’s just me but having trouble matching names and faces with the guys. Old age, senility…. lazy(hehe), the dudes are to generic, I say lazy by a sizable margin. been mostly fun so far though BBAD not great.

After seeing the episode, Sindy has super strong potential in the game, physically. She’s a comp beast, and if she survived the week somehow, or returned via the twist, I think she could put up one tough fight.

This is so similar to BB16!
1st evictee: gets their boobs out (Risha/Joey)
2nd evictee: is of asian descent (Paola/Sindy?)