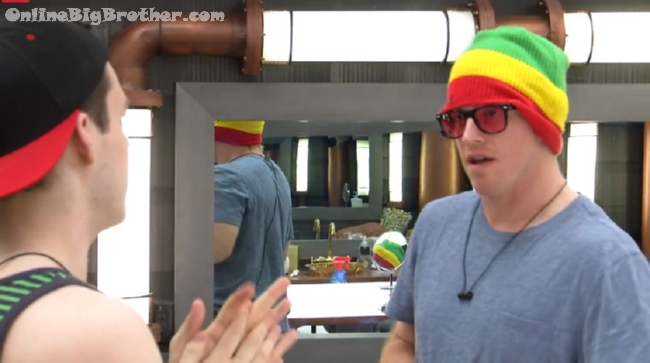 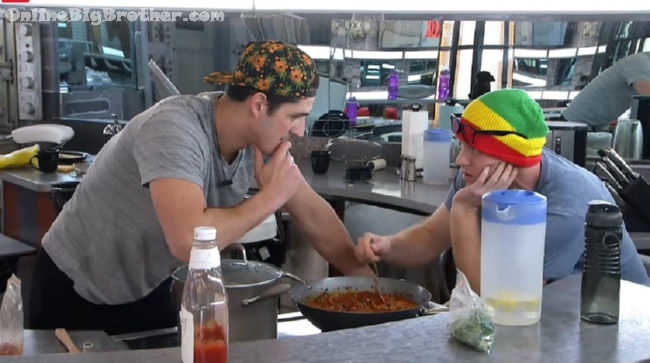 6:37pm Kitchen Zach and Jordan
Zach tells Graig “My heart is racing right now.. I want to chop like 4 people right now ”
Graig ‘Right on”
He adds that he wants to get rid of Sindy
Zach – She’s trying to get Johnny and Sarah .. It’s what my intuition is telling me
Graig – Thanks for telling me

Jordan joins them
Graig – We still gotta stay together man.. cause Johnny is one of the girls you know I feel he is
Jordan – Ya I don’t know where his head is at
Graig – seems like he’s with them ….I dunno my mind is racing.
Jordan – we got man 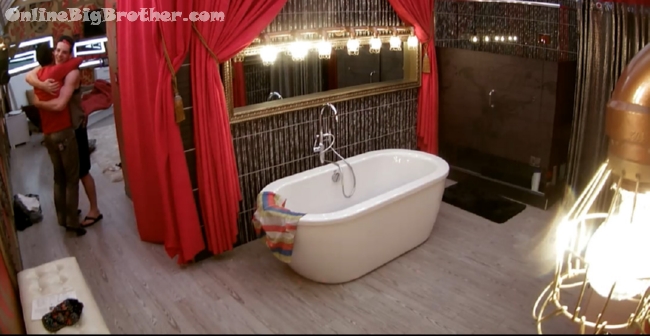 6:56pm HOH Bathroom Johnny Kevin
Kevin – So Sarah wanted to talk as a group?
Johnny explains she wants to form something
They both agree the vote is going to be unanimous for Sindy to leave.
Johnny – Unfortunately
Kevin is indifferent.

Johnny says if he had won the POV he would have wanted to use it but it would have put a huge target on their backs everyone would think there was a guys alliance.

Kevin appreciates that Johnny gave it all he had during the POV.
Johnny – How are you feeling it’s quite the buzz around the house.. your little make up session with pilar
Kevin – It was just for fun
Johnny isn’t sure she overheard Pilar and Willow talking in the bathroom when he went in there to ask Pilar if she had a good time she turned BEET RED “She’s a little embarrassed about it”

Johnny “if it’s right and in the moment why not”
kevin – She’s a little cutie
Jonny this should be an interesting next week.. you gunning for HOH
Kevin – Ya
Johnny – Everyone has to
(Kevin did comment on how loud Pilar was when she kissed) 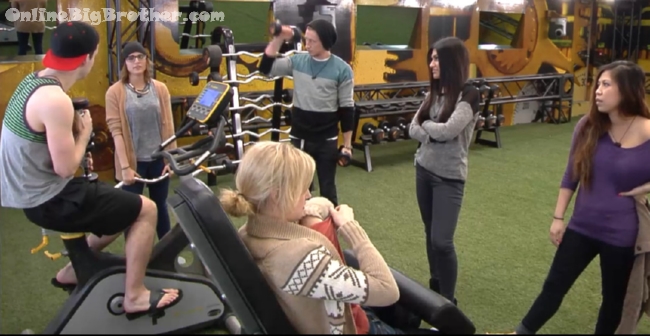 7:07pm backyard giggling about Kevin making out with Pilar.

Willow – I couldn’t sleep it Sounded like Pilar was drinking soup intensely.. I’m joking I was dead asleep
Kevin – She’s so loud.. she gets into it man goof for her
Willow – Is it going to happen tonight
Kevin – When I say I’m just having fun I mean that 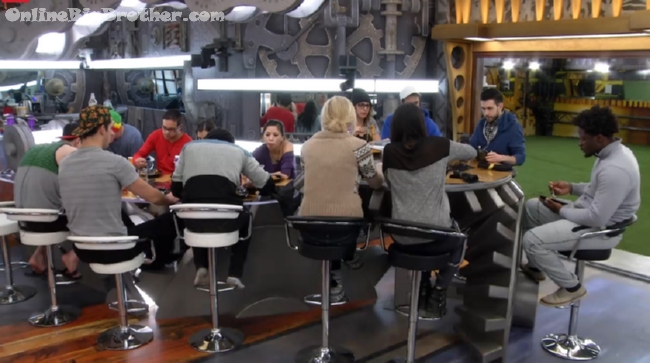 7:17pm dinner time
Graig jokes next time they want a nap they need to flood the HOH.

They start talking about the feed. Jordan and Willow being feed watchers says the two big differences about US and Canada feeds are 1) Canada feeds are free 2) Canadian houseguests are kept up where US are allowed to sleep during the day.
Willow also points out that the US house guests spend a lot of time sun tanning. 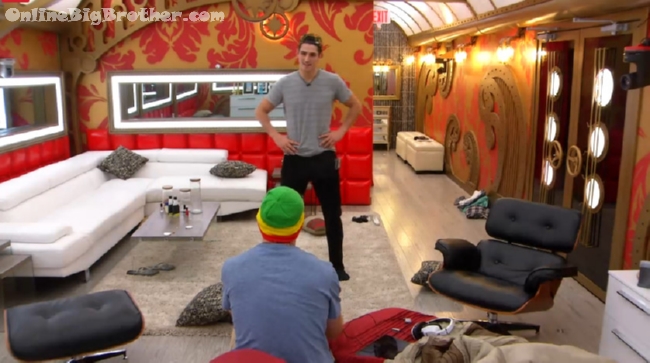 7:32pm HOH Zach and Graig
Graig says they have Brittnee, Bruno and Godfrey..”I think we have JP.. I think we got Kev too”
Zach – we got JP
Zach tells him that Pilar and Kevin were making out last night
Graig – WOW
Zach – we have Pilar close.. Kev is a smart dude he’s going to want some firepower with him now which means he’s going to go to johnny and if Johnny is with Naeha that could be a formation of four right there.. if they pull Sarah tehre 5
Graig – Sarah is in there for sure
Zach – next week we put a dagger in that
Graig – we have to get this.

Zach warns that Naeha is really smart, “I don’t know if we should work with her or get her out before she’s on to us”
Zach says Naeha knows what is going on in the house by just “watching sh1t..” , “:We know everything because we’re are in on everything”

Zach thinks she should leave the young girls in the house because they can manipulate them, “Do the Dan with Danielle” “Dan couldn’t have done what he did to Danielle to a smart girl”
Jordan Agrees

Graig Telling him that the core 4 (Bobby, Graig, Zach and Kevin) have to stay strong. Graig adds that he loves Bruno he’s hanging out with him. Graig stresses to stay strong and get out Naeha.

Omg! There he is. I thought something had happened to Godfrey. I haven’t seen him in 24 hours. What has the man been doing all this time, while the other contestants have been busy playing BB?

Don’t want Sindy to go!! She’s a comp beast- she has potential to really shake up the house.

um… simon/dawg…
do you guys mind posting the current alliances at the end of each post, and which ones are real or not?
because alllll of these alliances are starting to make my head explode
it’s like bb16 again lol

Sure will I’m still trying to figure it out myself.

Willow is annoying…she yaps so much, unnecessarily

way too much. when HGs are too intense talking game to everyone or anyone, they alarm others, including or especially those who they align with.