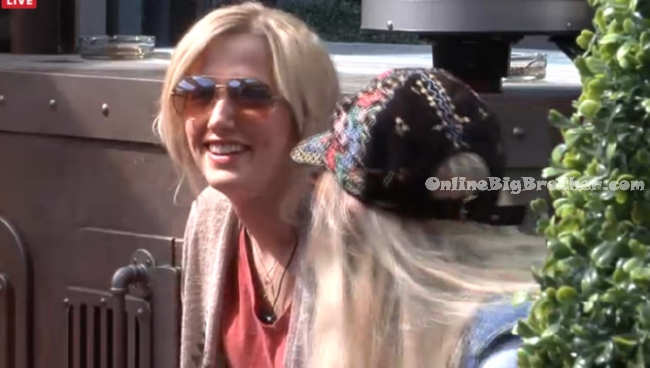 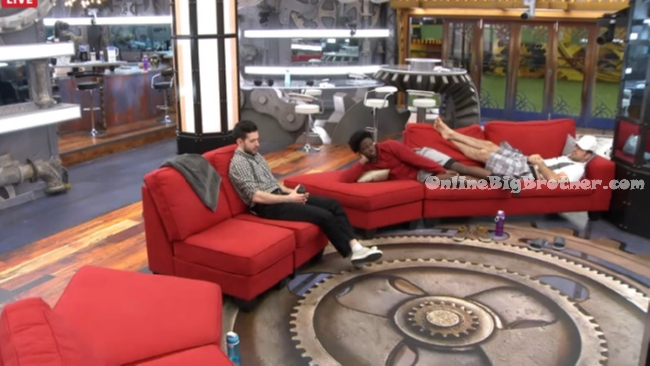 11:40am In the living room – Jordan, Bruno, Godfrey and Graig are talking about random things. Jordan says that the best decision was going to bed early last night. He says up until now he’s only been getting 3-4 hours of sleep a night. He comments that the slop isn’t that bad. He asks that if any of them get to choose the havenots, please don’t choose him again.


Out in the hot tub room – Britt, Sarah, Naeha, Willow, Pilar, Ash, Johnny, Kevin and Bobby are all sitting out in the sun talking about how drunk they were during the sequester. Ashleigh says that she threw up the morning of the press day. Willow says she threw up for 24 hours straight.
Everyone but Willow, Sarah and Ash leave. Sarah asks Ash so you kissed Bobby last night? Willow says everyone kissed everyone. Sarah asks he was really into it? Willow says really gross, it was really aggressive. Sarah asks there was lots of tongue? Ash says it felt like I had a little sausage in my mouth. Willow says verbatim! Ash says it was a little much! Willow says but he was like that with everyone. Sarah asks was it like that in the HOH room? Ash says yeah. I think that’s why everyone afterwards was like Meh.. better not! Willow says but B really likes him. Ash asks did she get in on that? Willow says yeah everyone kissed everyone. Kevin joins them and Willow tells him she talked to Pilar about him. Willow says that Pilar expects you to sleep with her every night now. Kevin comments that Pilar was the one kissing really loud. Willow says that’s the Spanish in her.

I get the feeling that Willow is going to be the arsehole of the season. She is so awkward!

Sarah please stop talking so much!!!!!!

I like everything she has to say. Keep talking, Sarah!

She’s kind of the Sabrina of this season, except she doesn’t have any control like Sabrina did in the first few weeks of her season.
Remember how Sabrina liked Andrew? *voms*

I think that willow doesn’t really mean what she says. Like she teases but it’s on the slightly awkward yet also in the innocent way. I don’t know, to me it looked like Zach was going for it when he went to kiss willow. But if she really wanted it. She had the opportunity but didn’t take it.

I love me some willow. She is actually so funny

I find Willow hilarious! She in no way reminds me of Sabrina, who was funny unintentionally. I think the constant need to make someone the “so and so” of the season should done very sparingly, especially this early in the game. Why in the world would someone want to find the “sabrina” of the game. Didn’t you get enough of her last year? Also, she was a very unique character, I don’t think you’ll find someone like her any time soon.