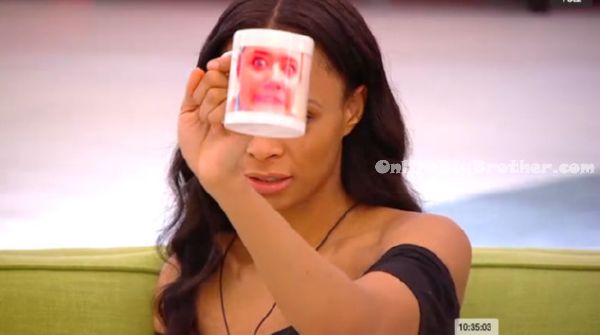 3:35pm – 4pm In the living room – Ika, Sarah, Heather, Jon, Rachelle, Sabrina, Andrew and Neda are sitting on the circle couch. The house guests are speculating on what the mug would signify. (The house guests found the mug in the kitchen earlier today.) Ika looks at the mug and holds it up and says that the person on the mug should enjoy their 15 minutes of fame because that’s all you’re getting. They talk about how their reward said they would get a “ring” so they wonder if they’ll be getting a phone call. They wonder if the mug has to do with a twist. Or if someone’s going to come into the house. The conversation turns to talking about past twists from other seasons of BBUS – Mole, America’s Player, Saboteur, Viewers Vote, etc. They talk how they know the twist this season was promoted as having never been done before. They talk about the chance of someone else coming into the house. Sabrina says well if that happened they would be evicted right away. The others say but that’s been done before. Kenny comments how there was a twist where others were living in the house that they didn’t know about (BB6 where twins traded places and Nakomis/Cowboy were related and didn’t even know it. Kenny wonders why so many people in the house have connections. He says that Andrew lives in Kensington which is 5 minutes away from my sister. I know his girlfriend. Just because we haven’t found connections between each other doesn’t mean there isn’t other connections. Ika says I think its just a coincidence. Ika mentions how they said the twist will greatly involve the Canadian public. Rachelle says she thinks there’s a reason why they haven’t told us yet. They laugh about how ridiculous it is that Andrew has been snoring for the last while and the havenots can’t even nap. Rachelle says that they told us that Canada found out about the twist the first night so there’s a reason why they haven’t told us yet. They comment on how they think they’ll get their reward tonight or tomorrow.

Sabrina says think about this – in the diary room hall ..there are 11 frames.. and everyone that comes in here gets a key. So many be the person coming in here gets a key. Last season the diary room hall had the clue – the moose. Kenny comments on how the biggest frame in the back … it moves. Something will come out of that. He says he didnt want to touch it too much but says it definitely moves. We all get keys .. and all those key holes means something has to be unlocked. 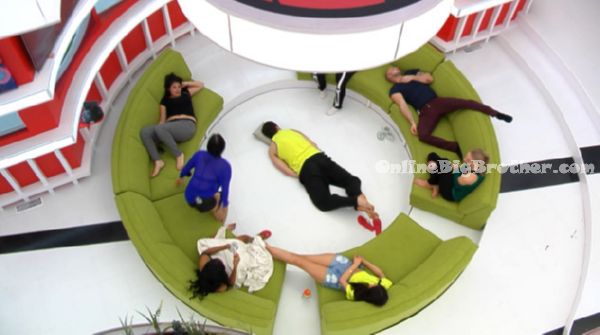 Out in the hot tub room – Kyle and Paul are talking about the drama in the house.
) 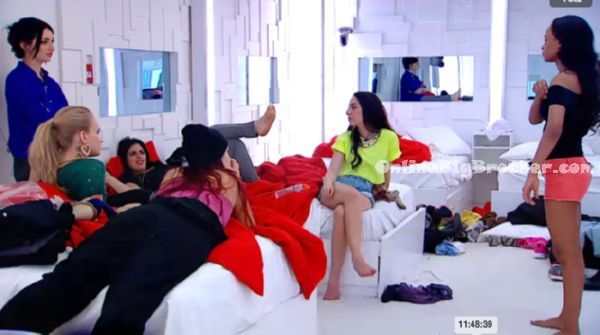 4:45pm – 5pm In the bedroom – the girls (Heather, Ika, Sarah, Neda, Rachelle) are dancing and talking about strippers and strip clubs. Rachelle describes how some strippers put cones in their v@gin*’s and people toss coins in them. They asks like pennies? Rachelle and Heather say no like it has to be a loonie ($1) minimum. Rachelle then demonstrates where the cone would go.

)
Arlie rocking out to HOH music:
)

5:10pm – 5:30pm In the bedroom – Neda talks to Ika about how she hates Heather. Neda says that its very rare for her to hate someone but she hates Heahter. They talk about how what Heather has been doing and saying. Neda says that Heather said something to Sarah a week ago about Neda and now Neda wonders what else she’s been saying. They wonder if she’s the saboteur. Ika says she’s not the saboteur… she just disgusting! 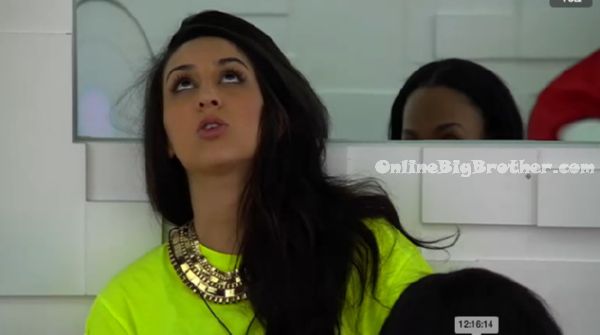 I hope at some point there will be an eviction where it’s 1 girl vs 1 guy (out of Kenny/Andrew/Arlie), and the “girl alliance” thinks they have the votes to evict the guy, and the “1st 5” think they have the votes to evict the girl, and that’s when Sarah and Sabrina will have to commit to one side (my guess: they’ll commit to 1st 5).
Obviously, Sarah and Sabrina are hoping that day never comes, or at least comes as late as possible…
From then on, there will be open war!

Talkir
Reply to  Johhny (the European one!)

Talkir
Reply to  Johhny (the European one!)

Did anyone elese see them start to talk about Kenny, but then BB turned off the feeds? That sucks. STOP WATERING US DOWN, BB~

Hey, I know piracy is illegal and what not, but is there anywhere I can find all the Season 2 BBCAN episodes without a Canadian IP? Thanks!

They already have it out for someone new coming into the house, if Ika’s reaction to the mug means anything… unless one of the secret three have immunity when they enter the house, they are dead in the water. Ika acting like a friggin snob over a face on the mug…. she hates being compared to Topaz, but like Topaz she giving off this entitled attitude. She forgets she is a contestant and thinks she is a star.

I wouldn’t be surprised if they were sisters; only difference is she is awake instead of sleeping/whoring.

I can’t stand Ika. She thinks that she’s funny and entertaining with her DRs, but she’s just plain irritating. That quote is so ironic.

And could someone explain to me why all of the girls are ganging up on Heather? It doesn’t seem like she has done much at all.

Very simple, heather is the only feminine girly girl in the house, if you have not noticed the other ones have very masculine and confrontational type personalities. Also they perceive heather to be the prettiest so they are jealous/intimidated by her. Consequently they tried toe xclude her but she was nothing but nice to them to their faces. On the other hand she is also playing a decent game. Right now arlie is playing the best game, I can’t recall many players who made a big move in the first 8 weeks who survived and won. Usually its people who sit on their laurels who win. If Topaz just slept all day for a few more weeks she would win. Just look at last season in us, andy and ginamarie did shit all most season. Emmet and Jillian were highly unusual in that they won back to back competitions and lied straight to peoples face multiple times yet people believed them anyways. Frankly they rival doctor will in that they can lie straight to someones face time and time again with a big smile and they still believe it until they are out the door. The messed up part was people like andrew and talla and topaz who were screwed out the money by jillian voted for her anyways. Hats of to Jillian, I don’t think it will ever be repeated in bb history.

Rachelle please stop constantly staring at yourself in the mirror and playing with your hair.

Rachelle, Ika and Neda are all disgusting. Sabrina is 1000% game playing. She’s stirring up the hatred that exists within these three vile hateful charmless individuals.

Me too! I stated earlier that he reminds me of Ryan Gosling!

I love Ika, Rachelle and Neda! 🙂 #girlpower! #teambeautiful <3
Sabrina and Sarah are some disgusting and annoying trolls though…
A note to beautiful women everywhere… Never align with ugly or fat women. They are haters on the inside…