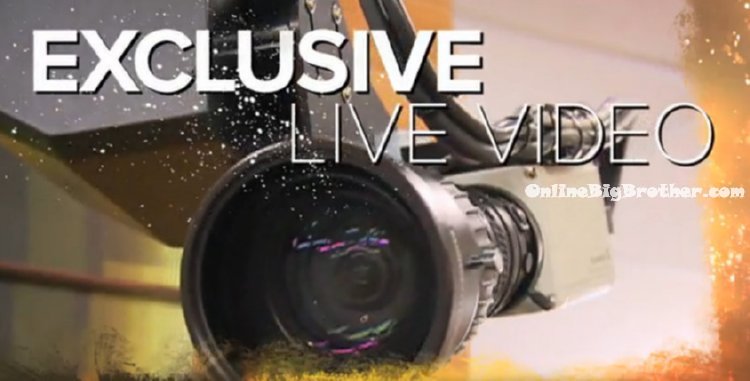 CBS decided to switch Big Brother over to high definition years ago but due to the changes in the infrastructure it was too complex to do all at once and therefore needed to be done in waves. For instance the producers needed an entirely new post production centre that needed to be designed, built and run through its paces to ensure it was ready for the 3 month big brother season.

“It’s not just about swapping out cameras, everything had to be changed and we couldn’t do anything that would jeopardize production of the series.”

Executive Producer – Allison Grodner states: for the upgrade to take place “14 miles of HD cables” needed to be replaced as the high tech system couldn’t run on the old low definition wiring. Additionally each new HD camera had to be installed and tested on the new digital control room.

Want 24/7 live access to the BB house this season? Sign up TODAY for the Live Feeds and save 20%!

Brother engineering-operations supervisor David Crivelli states: “We only had six months at a time to do [the changes], we had to do a heart transplant,” even as the “patient” – the big brother series continued to run on schedule.

Rich Meehan added that for better coverage of the houses rooms and corridors:

“We’ve added 11 new cameras in the house for better coverage, we’ve also lowered some of the cameras so viewers are in the action more.”

In addition to more cameras each one now covers more ground as HD uses an aspect ratio of 16:9.

“You can now see from the kitchen area to the bedroom in one shot, it changes the whole look of the house.”

Allison Grodner states that she can’t wait to run the “high-performance machine” through its paces this season. She states that:

“We’re mindful of color and texture more, we’re making sure there are layers and dimension to the house.”

Adding that the big brother viewer that subscribe to the 24/7 live feeds will benefit greatly with vastly improved picture quality. David Crivelli states that “It’ll be a noticeable improvement for the internet viewers.”

Easily the best news to come out. It’ll drastically raise the production value.

The more cameras is great but so are the additional microphones to pickup all of the whispering. Bring on the houseguests!

Finally!!!!!!!!!!!!!!! Welcome to the 21st century big brother. Makes me feel like my money for the feeds is finally going toward some good use. Can’t wait. See you guys in the chat rooms. What twists could BB have in store….

How can they say that we will be able to see the bedroom with the kitchen camera?…do they know where the bedroom is?…i think they meant to say we can see the “living room” Not the far away bedroom, right?

Better soundproofing of the rooms would be far more worthwhile. There’s nothing worse than whispering housemates, especially when they’re talking game.

Imagine if we got Spencer in hd last year ughh.

Does this mean we get to see all the bugs and filth as the season progresses. I can’t wait.

LOL Yes I’m sure the camera men will have a field day with the new cameras..

Just clicked on Online Big Brother and “WOW”…. nice new site this year! Great work Simon and Dawg! Now, let’s just hope this year has some great entertainment and not so much disdain!

Thanks! We’re glad you like the new look! Its going to be a great season!!

Will there be After Dark this year?

Yes After Dark will be back again this season 🙂

but sadly, it’ll be on tvgn again. put it back on sho2! that’s how i started watching big brother.. got interested on season 8 with after dark, then really got into it with season 10.

oh man that sounds like a lot when you put it like that ..lol I don’t know if I can wait that long 😐

The cast will be revealed on the 19th the first week of the show will have additional episode alot of people saying the first episode is meeting the returning players and there love one’s LETS go plus live feeds delayed one day.

Yeah the live feeds are starting a day later which is weird as they usually start after the première. I’m wondering if there will be some type of twist or a vote announced on the première episode and thats why they’re delaying the feeds.

I’m thinking we have to vote which veteran and there love one get into the house.

Hi Simon, I already email the new stats of Big Brother 1-15 and I check the stats and it’s still the same. What’s the update for the new stats?

Bring on the twists

Hi Simon & Dawg, love the new site. Did I send you a email with new stats?

Sorry captain.. Send me the stats and i’ll update the page . we’re still working through updating the new site.

Sending the stats to you, check your email.

Simon/Dawg, any idea on what you might think the makeup of the hamsters will be this year? Twists? Everything I’ve gathered seems to point to a twist with a mix of newbies and veterans? I could be way off the mark though.

Yeah its really hard to guess at this point. I’m always wrong whenever I think its going to be something. I have a feeling its going to be All-Stars 2 with a fan vote to decide who some of the house guests are going to be which is why the live feeds don’t start until the day after the première. Just like on BB7 all-stars there were 20 potential house guests with 14 selected. …Although now that I’ve said this it will probably be an all newbies cast … which I am perfectly happy with!

Thanks…Usually, Evel Dick is unreliable with his twitter, but this is hilarious. “I keep hearing mentions about a BB couples season, but keep hearing Eric Stein. So will he be bringing his right hand or his sock… mystery”

Hi all! Is the online big brother app still available? I’m having trouble finding it.

The IOS app was pulled last year it was giving us too many problems. The New site should be more mobile friendly..

Capt’n stats have been updated… Awesome resource for BB fans.. Thanks Cap!

Hey Simon and everyone else you all want brand new house guests?

I want all new house guest only how I would like veteran’s is if they come with love one’s and it’s a twist that they put up against there love one’s.