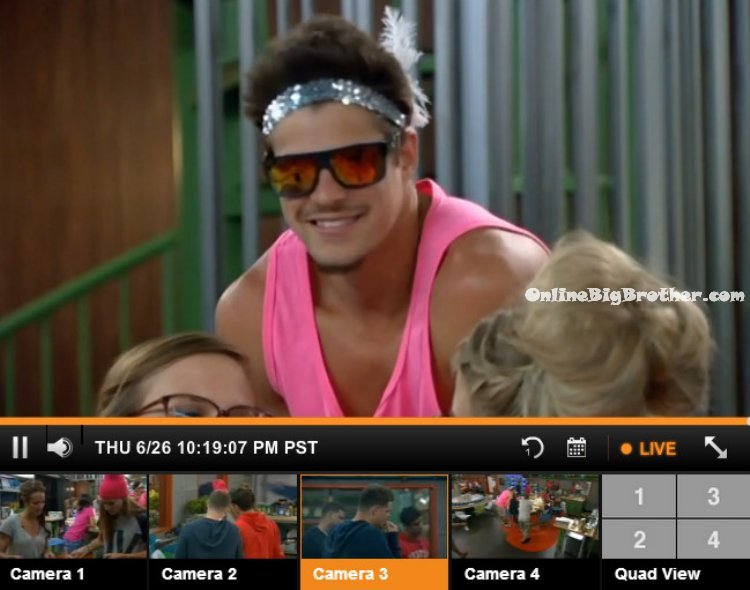 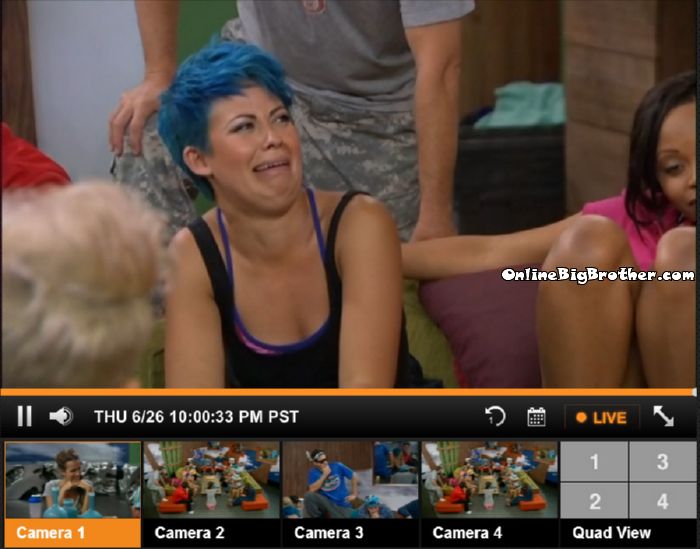 Feeds Start up Everyone sitting around the living room not moving. All of a sudden they start running around screaming BIG BROTHER 16. 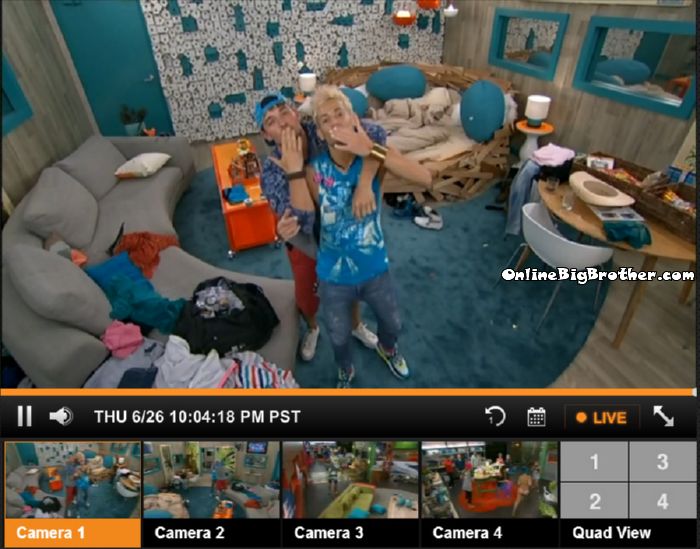 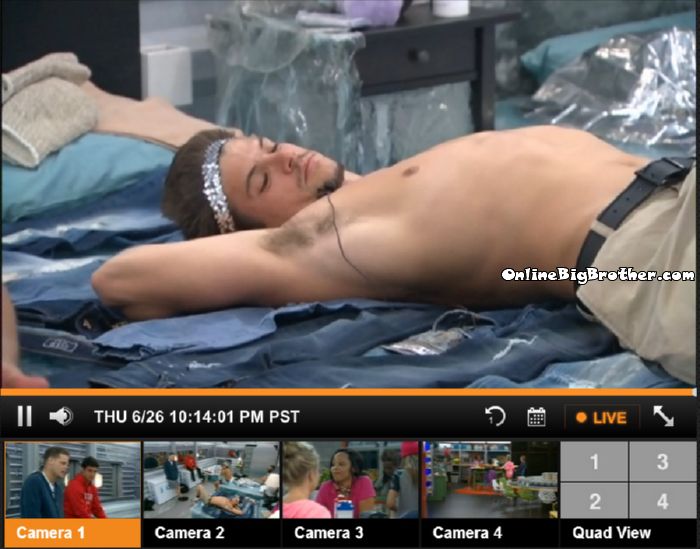 Cody says he volunteered to be a Have Nots this week. 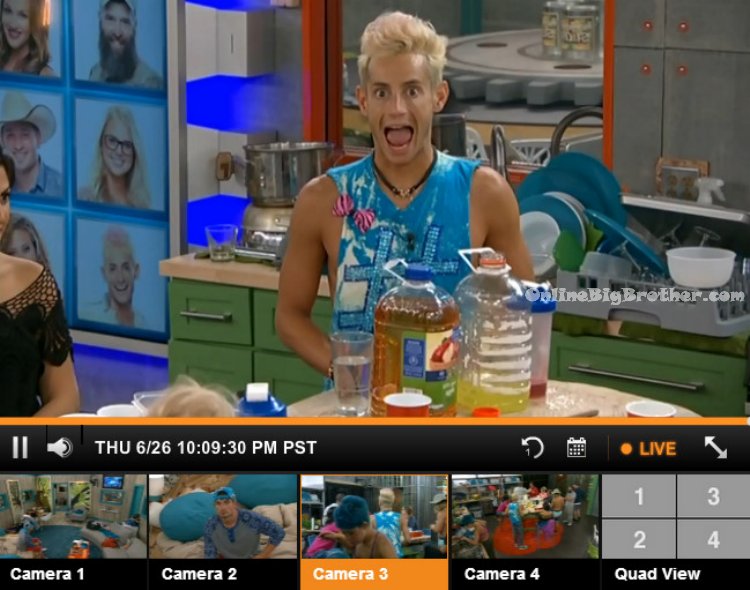 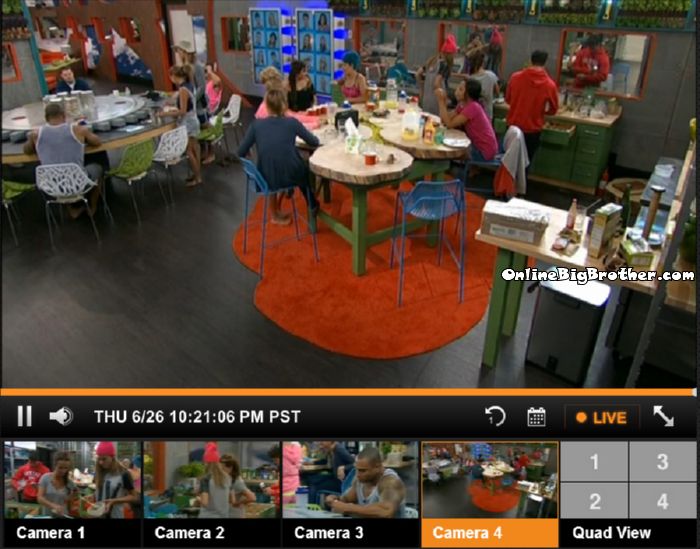 10:20pm Memory walls shows Paola and Donny missing a key in their Memory wall picture. Therefore those are two of the four nominees.

Houseguests engaging in random chit chat. There’s talk to indicate that the “Girls Alliance” has been exposed No more “El Cuatro” 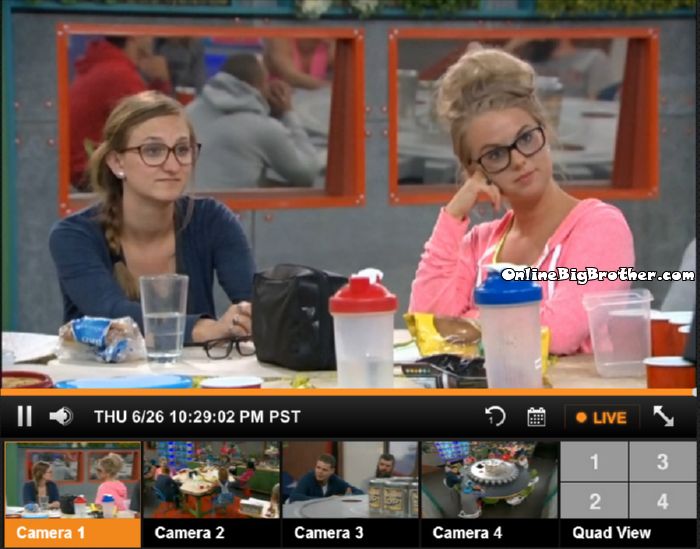 Big Brother 16 Live Feeds are now ON! if you don’t have them yet what are you waiting for! Try It Free! Subscribe now to the official BB16 Live Feeds

10:20pm – 10:30pm Cameras 3 & 4 – The house guests are in the kitchen hanging out and eating. Caleb, Devin, Derrick, Zach, Hayden and Joey are all sitting around the kitchen table. Caleb says that Jeff Schroeder ask him to take him hog hunting when he gets out. They discuss eating the slop and what things they can add to it. Joey, Cody, Hayden and ? are havenots. Joey and Cody apparently volunteered to be on slop. The havenots can eat deep fried pickles.

In case you are like the rest of us here’s a short explanation of the twist.

HOH TWIST = TWO House Guests win HOH each Thursday. They both nominate 2 House Guests (Total 4 Nominees). The 4 Nominees then compete in the “Battle of the Block” competition and the PAIR that wins is safe for the week and the HOH that nominated them will be dethroned and in threat of being nominated as a replacement should the Power Of Veto be used.

That girls alliance was never gonna make it past day 22

I’d like to see one season where the women stick it out together…something tells me this won’t be that year!

Hope they send paola’s ass out the door this week!

I don’t know the minister’s name, but she seems so disingenuous. Get her out before she uses Jesus as an excuse for everything!

That’s Jocasta and yeah we’ve seen this exact same person before on prev season-I forget her name but always with the Jesus and throwing temper tantrums. Was it that same chick who threw her mike in the pool and got kicked out? I can’t remember. PLEASE COME TO THE DIARY ROOM lol

Her name was Chima…she was a piece of work! Russell was a little angry too!

Ohh, I thought her name was Dan..?

Joey has become annoying, besides that , she has hot dog bOObs

One of the first trends we will see this year is the 2 HOH’s getting together and making a pact that which ever one loses their HOH the other one doesn’t nominate him/her.

No that’s not how it works-the other HOH does not nominate but the nominee who wins the challenge.

I also wonder how hard the house guests are going to fight for the privilege of being HOH?!

Is Caleb already in love with Amber? How long have these people been in the house?

Okay seriously? If you’re wathcing the feeds then you have to agree that Frankie and Zach are going be showmancing!!! I can see it now: ZANKIE….

Zach to Frankie….”these are amazing.” talking about Frankie’s jeans. #showmance

How in the heck did Caleb pass the pysch evaluation? creepy stalker.

There’s an underlying edge to him…not sure if it’s a sociopathic vibe, like the Florida graduate who hates everyone,but there’s something wrong and I have a feeling it’s going to play out LIVE for everyone to see!

Isn’t he the hunter? Maybe he’s been stalking animals for so long that it’s jsut second nature to him now. LoL
Thanks again Simon & Dawg for this wonderful forum and all your hard work 🙂

Paolo is Crushin on Caleb ! Nothing worse than a guy spilling his guts about another chick to you when you’re lusting after him..And Zack and Frankie are having a severe bromance!

The audio in the live feeds is jacked, the audio in camera one plays loud over all cameras and can’t be muted. Anyone having audio issues?

Fixed it by flushing the Flash player cache in case anyone is having audio issues.

I think that’s a fair pact to make with each other. Not to nominate the other HOH. It will be funny to see HOH’s pick all these weak people(or who they deem weak) to try to beat in the comps. I don’t get the live feeds but I will enjoy reading about them. Thank you guys for putting them up and giving a play by play, LOVE IT!!!

woooo i’m feeling hayden and amber! i like christine and nicole too.

I CANT STAND FRANKIE. The second episode he made a comment about Caleb on how he can already tell he’s not going to like him, saying that he is too conservative.. In a society where you preach tolerance, and not judging a book by its cover its pretty sad that frankie – who should be a big supporter of this philosophy goes against this and judges caleb based on his appearance. #PracticeWhatYouPreach

I completely agree! He is such a hypocite. If anyone judged him on his appearance and the way he acts he would loose make it his mission to get the entire house against him.

That comment stood out for me as well, esp since Caleb has been involved in some controversy re: homophobic opinions. Seems like prejudice goes both ways.

Let’s be real Donny is the real deal here