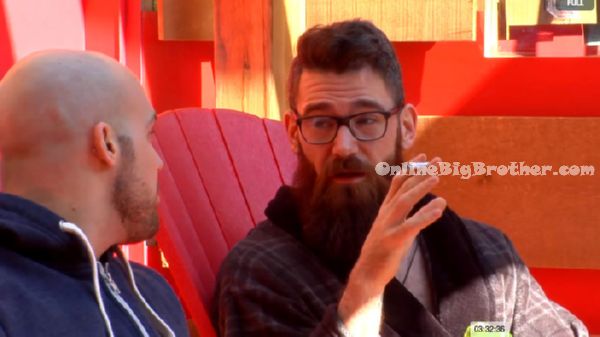 11:35am The Live Feeds return. Andrew and Kenny are out by the hot tub talking. Andrew says he will put up Paul and IKA as the pawn. The discuss back dooring Heather. Kenny tells Andrew how Ika and Heather are the ones planning and trying to get out big players. Andrew says that Kyle is gunning for us but its not time to get him out yet. Maybe the next time or the time after that. If we make him feel safe this week, then he won’t come after us next week. Andrew says he can win the veto to keep the nominations the same. Kenny says that he hopes he is picked to play too. 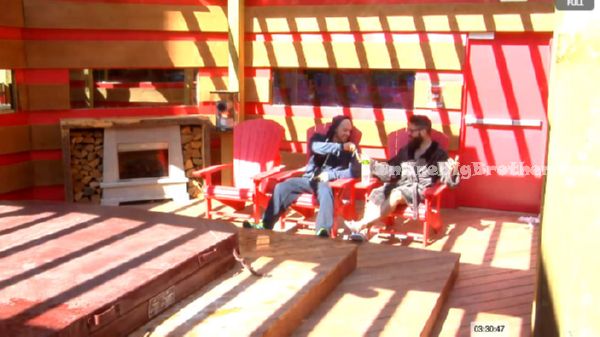 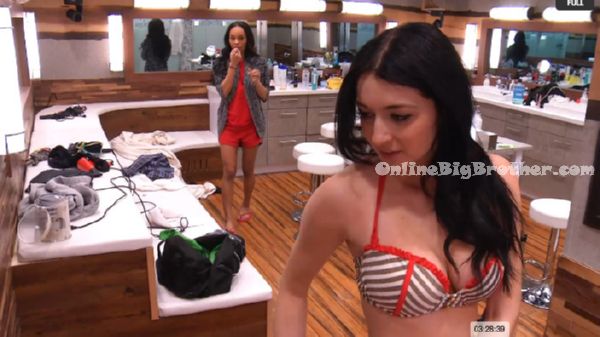 12pm – 12:35am Andrew, Rachelle, Adel, Kyle are hanging out by the hot tub talking about Andrew’s HOH letter from his mom. They comment on how his mom’s letter was really well written. The conversation turns to talking about how Andrew went from on the block to winning POV, HOH and says he wants to win this POV too. I am guaranteed to compete in it against another 5 people. He says it sucks that he doesn’t have a showmance to share his HOH room with. Kyle comments that he has photos of all the girls he’s banged. He calls it proof of purchase. Rachelle and Andrew are shocked. Kyle says its just the girls on the sheets and then he has more explicit photos of them but that they all know about it. 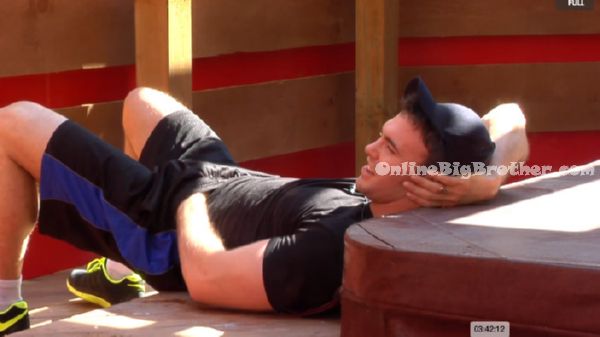 12:40pm – 1:20pm Big Brother cut the feeds and when the returned – Andrew has his HOH room and the he half – havenot room has been opened up for the havenots. Havenots are: Rachelle, Neda, Heather and IKA. Neda says that its making her sick. They wonder if they have to have cold showers or not? They head to the kitchen to read the rule of the havenot room again because they think they will also only get half a good night’s sleep. They think strobe lights are going to come on half way through the night.

1:35pm – 2:10pm Up in the HOH room – Andrew, Kenny, Arlie, Sarah and Sabrina are talking about the nominations. Andrew is telling them that he wants Paul out this week. They discuss putting up Kyle to get him out now while they can. The guys leave and Sarah, Sabrina and Heather stay in the HOH room to talk. Sabrina is complaining about how she asked Adel to not cut meat on the grill because it will scratch it. She says he told her to leave him alone. Meanwhile in the war room – Nate, Scott and Allison are watching the spy screen on the HOH room and trying to decipher what’s happening.
HOH Room: 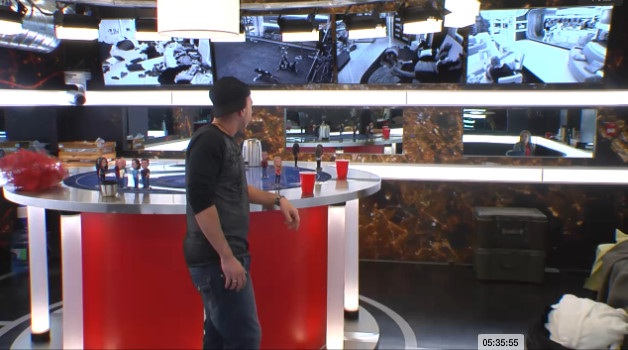 IKA, Neda and Rachelle in the half-way house:

what a power move Andrew! Get out the little blonde

I think Ika is the bigger threat

Johhny (the European one!)
Reply to  julie chen

good ol’ Chevrolet! 😀 I can’t believe I’d say that now, but they were able to come up with something even more embarrassing… “Twisto’s Twist”? Seriously?
What’s next? The “shitty move of the week”, brought to you by some toilet paper brand? oh well…
In terms of eliminating players, I’m all in favor of getting rid of annoying people at first – anyone can turn out to become a threat later on due to various criteria (like “not being a threat” making them practically un-evictable!), so you might as well get rid of those who just diminish your “living quality”…
So Paul would be my 1st choice, but I agree that Heather is a good choice as well, not only for her “Barbie Doll” voice and personality, but for actually scheming against the current HOH.
I hope we get to keep the strategic players longer – it was a real shame what happened last year at BBUS, with Nick Uhas getting evicted really soon – he was one of the few to actually use his brain in there…

Itt is a power move she is a smart social player and can rally the girls against him. Andrew can beat any guy in any physical comp, but can he beat heather in hanging from a string on a 1 inch footstool? If you are a big guy you better take out all the small chicks… or ally with the strongest one. Ika heather and rachelle are the most dangerous players.

I like Scott because he is COMPLETELY different from than the other HG’s. I like Allison but I don’t see her bringing the same amount of entertainment that Scott would.

I’m curious how the psychology angle might work out..

I think Allison would bring alot. She thinks Kyle is attractive. She is pretty , tall , athletic female who will be seen as a threat by all the small petite women in the house. Can anyone else see an epic catfight coming in the future?

How is it a powermove? They want to scatter the girl’s alliance but Heather’s not in it.

im confused about the alliances. i thought kyle was in the boys alliance, but kenny and andrew just suggested him for nominations… so i guess boys alliance is just kenny, andrew and jon? maybe arlie, i dont see arlie too too much with them either, he seems more with paul and adel.

the first 5 alliance voted together and made the 1st 5 symbol so i am assuming they are still together: sabrina, andrew, kenny, arlie & sarah. sab, sarah, andrew and kenny were just in the hoh room talking openly about noms, when jon was there. and the boys never mentionned nominating jon, so it seems jon is in with them? or maybe he’s just off the radar.

paul, adel and heather do not seem to be alligned with anyone. or kyle. i predict one of them will go this week.

paul, adel, heather, and kyle don’t seem to have an alliance because they’re all so annoying, watching them on the feeds/the show is sooo cringe-y – the 4 of them need to go haha

and i do want scott to go in the house just to see how the rest of them react to him and the whole situation. he talks wayyy too much and cuts alison and nate off before they even open their mouths. he is obviously this season’s gary, but at least gary let people talk.

Rochelle is a babe. That is all

Same with Allison. Hot and smart.

I question any woman that would sleep with Kyle. GET THE F OVER YOUSELF !! you’re gross :p

Does he have time for a girl friend; as every pic he has his hand down his shorts.

Kenny seems more bisexual than gay to me, but what do I know?

wish he would shave that beard though. underneath it maybe there is a model.

I think that’s the way he wants people to see it…he wants people to think he is straight (he said he was going to not tell anyone about it initially)…and even if he (or anyone) seems that way, the only person that should be deciding is that particular person…but however, i do look forward to the day when everyone else finds out Kenny is gay because their reactions are going to be so priceless and Rachelle will go completely crazy and there is going to be drama….hopefully it happens in the house in not the finale or else there wouldn’t be any drama…however, i do wonder what would happen if there was another “openly” gay houseguest in the house, would he take the same approach…also, if you are not gay…you have no idea what it’s like…but i do think that he should shave his beard…i have a hard time believing he is a model…

The reason you keep the strong is so you don’t have all out war right from the get go and the floaters just flip flop votes. Take away a bunch of the weaker ones and at least when the line is drawn in the sand people stay on it.

Strong pplayer dislike the fact that weak players can make it to the finals doing ABSOLUTELY NOTHING. Like the season where Jordan won. Did shit all, all season and so did her competitor/ #2. Why would the strong players just wipe each other out in the first 4 weeks to let weak players win. You win big brother by taking out the strong players last and the weaklings first because no one targets you for booting a weakling. No one cares Anick is gone. Had Paul put up another weak player he’d be sitting REAL pretty right now, like Anick and Heather what heather gonna do?

I never understood the desire for players who call themselves Men want to take out a player who is not a threat at this point of the game. What will they do when confronted with some adversity roll up in fetal position and cry.

So, is Ika destined to be on the block every week lol?

I so agree with you guys saying about taking the weak players out. It doesn’t make sense. Gun for the stronger players (especially the stronger physical ones). FIRST!

Ika needs to do something about becoming the pawn. Her little girl’s alliance obviously isn’t menacing enough to keep her from being put up on the block. Being the pawn/scapegoat is NOT a good reputation to have. Spencer was a good example of that.

still undecided who i like … when i watching the usa version of big brother right away i know who i like which team i pulling for … .. maybe kyle dont know yet