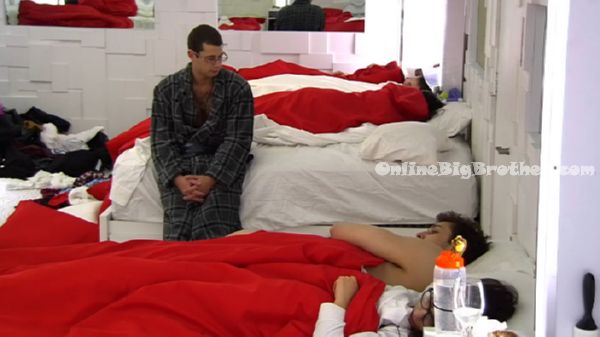 9:30am Big Brother wakes up the house guests. Most of the house guests are waking up and showering. Jon and Arlie are in the bedroom talking. Jon says that he tried to get up several times to go pee but couldn’t because he had a chubby. He says he thought he could just rest his eyes for like 10 minutes and wake up and go pee but the chubs was still there. Jon says Worst Part About Being A Guy: CHUBS! YO CHUBS ITS ME! CHUBS IS ME! Chubs & J-tugs! Arlie and Paul head out of the bedroom and to the kitchen for breakfast. Paul & Adel come into the bedroom and talk about how Andrew will be making his nominations today. Paul tells Adel how he hopes they aren’t nominated and how they should just stay away from Andrew. Adel comments on how its obvious the other guys have an alliance. And we’re not apart of it.

10:10am Arlia, Kenny, Adel, Kyle, Andrew, Sabrina and Paul are all sitting around the kitchen table talking about dating apps and other random things. Heather comes down and says that she was going to the bathroom and the toilet exploded. She says that someone dropped a monster deuce in it and broke the toilet. The guys laugh and tell Heather that they all know it was her. Heather denies it was her. Sabrina says wasn’t me, I’m a constipated f**k. Kenny says that he bets it was a girl and she just won’t admit it. Heather says that if she did do one that big to break the toilet she would be proud of it. Sarah says she wishes she could go. 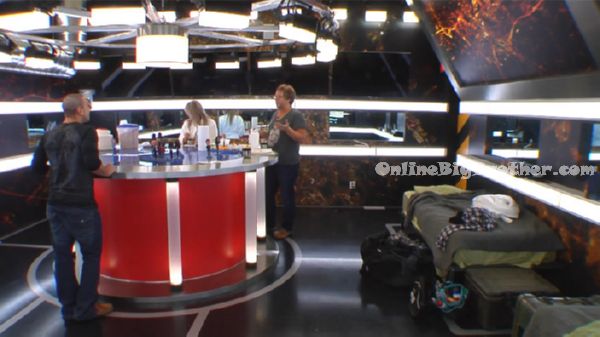 10:25 – 10:40am Big Brother turns the war room cam back on. Nate, Allison and Scott are waking up and making their breakfast. They talk about how Paul looks like a strip club owner. Scott says that he can’t believe that bobble head is Andrew. I pegged him for the gay guy. He is going to hate me, I hope he doesn’t see this.

11:05am Big Brother has blocked the live feeds for the last 15 minutes.

I know it’s only day 2 but so far I’m not impressed with this season. Will hold on a little while longer but they’re losing me.

Johhny (the European one!)
Reply to  dixie

The most impressive thing about BBCA2 so far def is the house for me! It’s gorgeous!!! I like how they put some flora in, and it improved in every aspect compared to the 1st season – which was already lightyears ahead of BBUS.
I’d seriously recommend to BBUS to just ship their next season over to CA and just film it there – so they don’t have to invest in upgrading their antiquated cameras.
Plus, they’d get a nice house with 2 floors instead of the 1 floor sardine can with ugly candy coloured interior!
The new HaLF-not-room is a nightmare (for them), but it’s a funny idea, and it was hilarious to see it for the 1st time! 😀

Simon
Reply to  Johhny (the European one!)

BBUS live feed image quality really needs to be improved it’s a joke now compared to what we’re getting on BBCAN. I still prefer the BBUS subscription model with no ads in the feeds over the ads in BBCAN2.

Agreed. I DO NOT like the random ads. And I can suffer through bad quality. I wonder if the CA one lowered the quality they’d be able to run less ads. Not saying I’m not thankful for the free-ness of it just that the free feeds give them more liberty to block them randomly when the US paid feed wouldn’t.

The insanity last summer with the live feeds being blocked from Canada really pissed me off. Glad they caved.