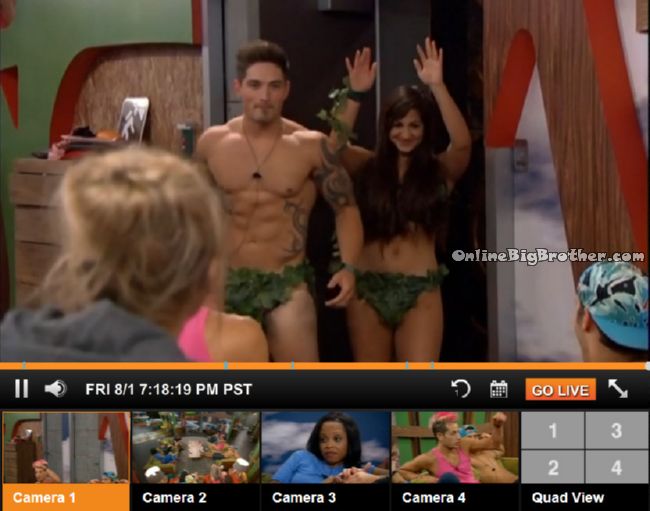 7:18pm
(They have to wear this for 48 hours. Originally Victoria wanted to wear her wedges but they said said she couldn’t. Caleb was giving her a hard time with this saying “You think MOses wore nikes”)
Caleb My name is Beastmode Adam
Victoria – I’m princess eve
Frankie keeps saying how hot they look

Hayden – you guys have to get together you have to procreate
Christine – its in the fine print.
Victoria says it doesn’t matter if they shower together as long as they wear their bathing suits underneath. 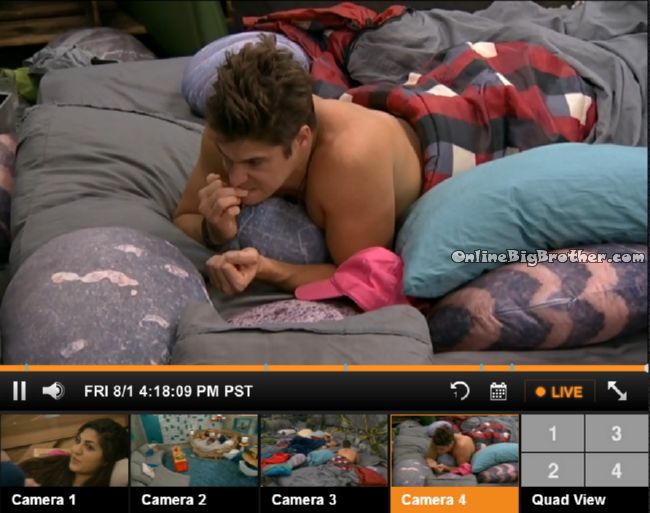 4:17pm Rockrom Zach and Caleb
Zach say worst case is if Donny wins the POV and pulls Jocasta down. That means someone from their alliance has to go up. I’m sweating bullets right now”
Caleb says the sacrifices he made for winning the BOB, Shave his head eat slop for 2 weeks.
Being attaches to VIctoria isn’t that bad. Caleb says when he has to go to bed he’s going to bed, “SImple as that”
Zach says it’s going to suck when she wakes you up at night saying she has to go to the toilet
Zach what happens when you have to take a sh1t 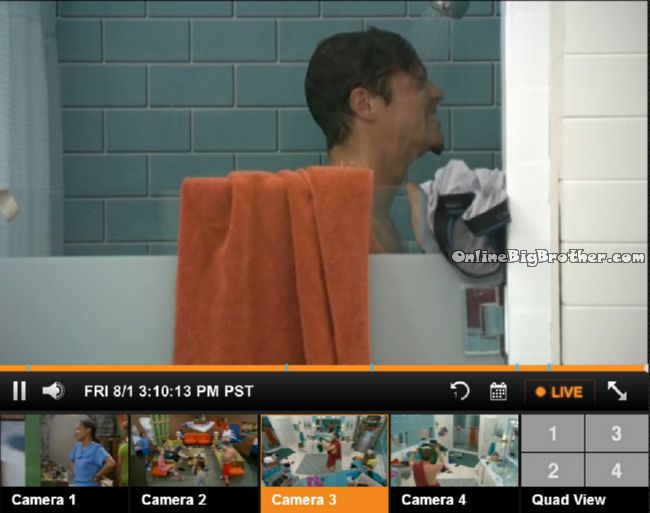 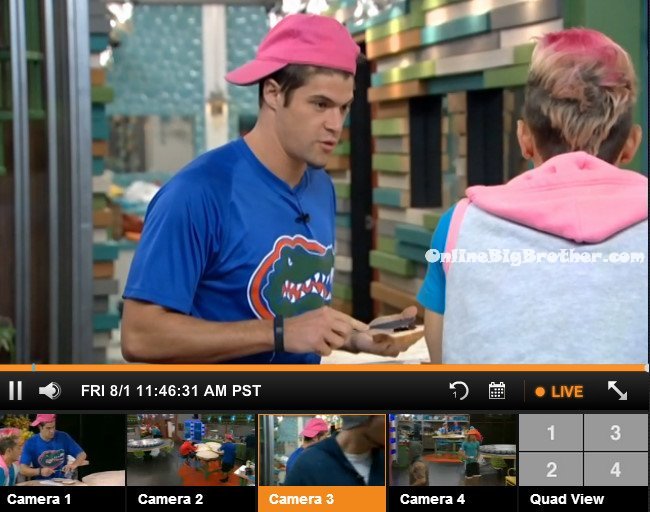 The live feeds return – In the bathroom Derrick tells Nicole that her speech was good. Nicole asks it wasn’t bad was it? Derrick says no, you took an innuendo from his book and used it on him. It’s not bad that I said it was a strategic move to nominate her (Jocasta) is it. It’s what it is. Frankie joins them and tells her she did good!

In the kitchen – Zach says she wants to play cat and mouse.. well she looks like a mouse and I’m as swift as a cat and I’ll bite your head off. I’m coming for you Nicole!! Zach ask Frankie do you think they (Nicole & Donny) worked together to do that. Frankie says I don’t know, does it matter. 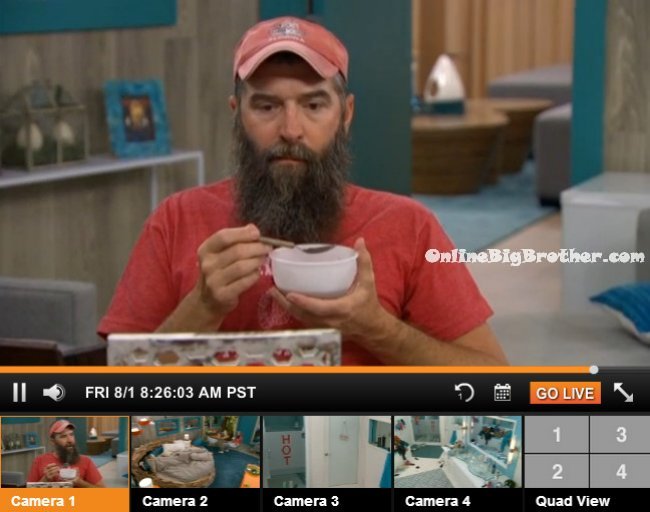 >8:10am Big Brother wakes up the house guests. UP in the HOH room – Nicole, Christine and Donny are waking up. Donny is looking at his HOH photos. He comments on what the world he was thinking in one of the photos. Christine leaves the HOH room. Donny asks Nicole if everything is still copasetic? Nicole says yeah… I am just trying to figure out what to say. Donny says say froot loops… say Coco Pebbles, it don’t matter. Donny looks at his photo and says I look so fat …goodness. Donny says it would be nice if you’re people dethroned me. 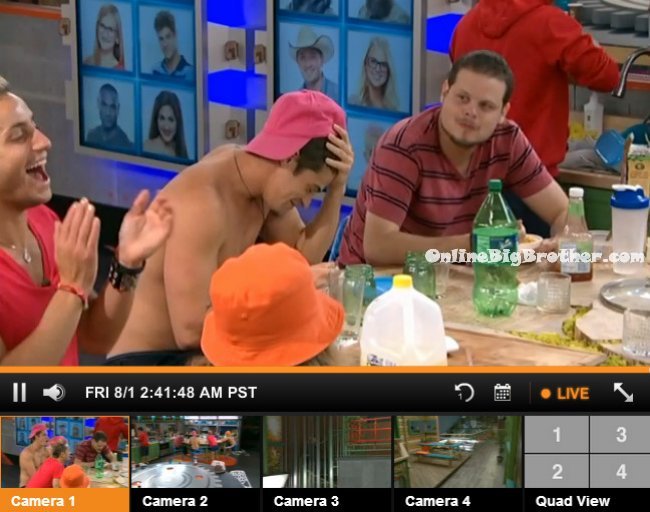 1:20am In the earth room – Caleb talks to Christine. Caleb says that Donny might put up me or Cody. OR Maybe both which would be stupid. Christine says that would just be stupid. Caleb says Donny said if Nicole is putting up the two weakest people then I might have to.. that’s why I said you need to put it in Nicoles head that she needs to put up Jocasta and with Zach because he put her up. Christine says I haven’t talked to her but I am hoping that’s what she does. Caleb says if she does then I am hoping Donny would put up Me or Cody with Victoria. 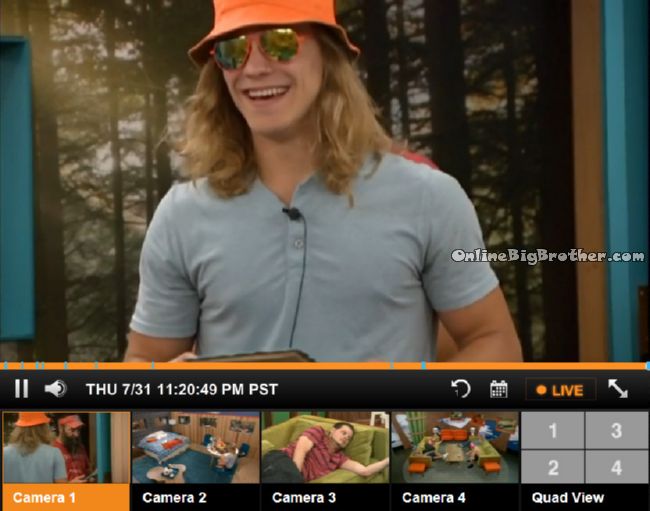 11:23pm HOH Hayden, Nicole and Donny
Donny – I have talked to everyone or at least listened. Donny tells them at first Caleb didn’t want to go up on the block but now he might be ok about it. Caleb understands that he put Donny up so it’s only fair.
Donny wants to put up Caleb and Victoria
Nicole – it kills me to put up Jocasta..
Donny – it would kill me better
Hayden agrees with Donny think Jocasta should go up by Nicole.
Nicole feels bad but will do it, says she would put Jocasta and zach