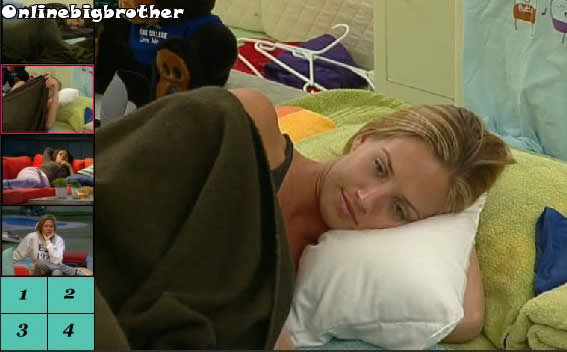 7:58pm Havenots room Dani and Porsche Dani saying that there’s no way Jeff is putting Rachel up. she is convinced that one of them will go home this week. Dani explains to Porsche that Jeff is seeing this as us against them they want to take JJSAR to the final 5 there is no way he’s going to pass up on that. Porsche thinks her and Dani will have a easier time campaigning for votes from Jeff and Adam than Kalia will. She brings up how pathetic Adam is getting with him kissing Jeff’s ass. Dani: “I would never vote for him.. I love the man but he’s done nothing in this game”.

Porsche talks about the POV if She’s in the lead and Dani is second she’s going to throw the VETO to Dani. dani wants to know why. Porsche wants Dani to have it so when shes takes her off the block they are both safe. Porsche is worried if she wins veto then Dani goes up and goes home. Dani tells her to play for herself she would never want Porsche to do something like that. 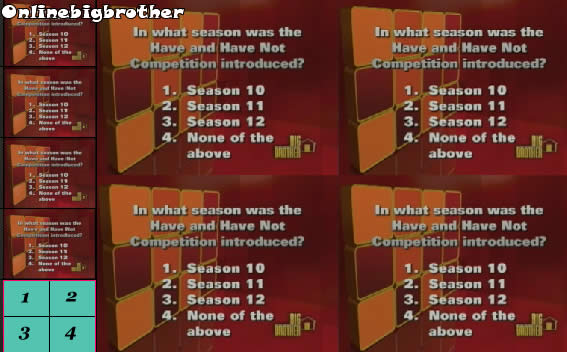 6:14pm Backyard Shelly, Jordan and Shelly Shelly brings up that Kalia is in the Have nots room bummed out. Jordan wonders why because jeff told her she was going up on the block. Jordan goes on to explain that at first she really liked Kalia she was nice to talk to and friendly then Kalia started hanging around Dani as she changed. Jordan: “She’s too cool for school” Shelly: “well when they were in power they were really cocky”. Rachel jumps in says that DKP are patheitic because Kalia was making excuses after Jeff won the HOH about it being a comp made for Men. Jordan mentions that POrsche was keeping up the entire time. Shelly mentions that Dani yelled to kalia that she has to hurry even Shelly is beating her. Rachel is disgusted that they said that. Jordan makes it known that she doesn’t like ‘those girls’. 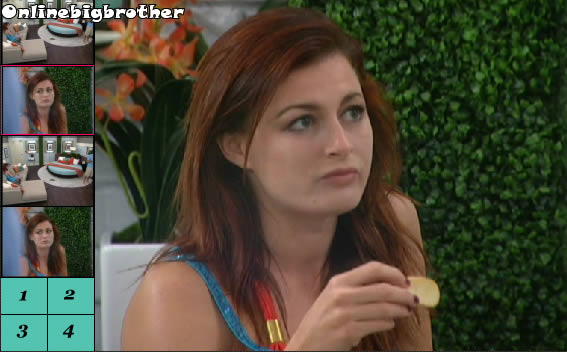 5:17pm HOh Rachel and Jeff They are going over what the POV comp is going to be like. Jordan joins them, says that Kalia thinks that Dani will win POV and save her.

Rachel points out that there are 7 people competing in the comp which is good odds. Jordan states the obvious Kalia, Porsche and Dani will all be fighting for the POV. Rachel wonders if Dani will use the POV. Jeff says he’s talked to Dani and he told her he would like the keep the nominations the same. rachel thinks she’ll use it. Jordan: “It doesn’t matter we have the numbers” Rachel asks them if Dani takes off Kalia who will they put up. Jeff says it won’t matter Dani and Kalia only have 2 votes JJSAR have the numbers. 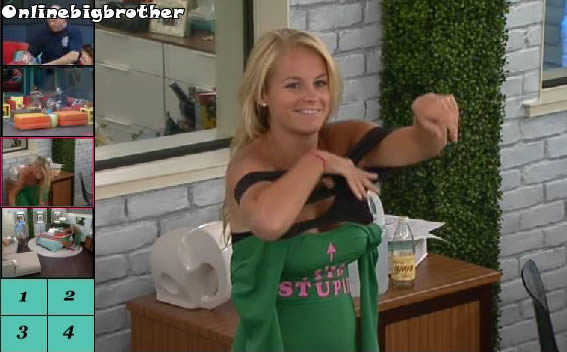 3:05pm Shelly and Jordan (In a past conversation Jeff had with Kalia she told him that someone from Jeff’s side has been talking shit about JJ for the past 3 weeks. Jeff’s reaction to her was “Who Shelly”, He regrets that because he doesn’t want Kalia to now go to Shelly and spin it like Jeff doesn’t trust her. Kalia never mentioned it but she was talking about Rachel being the person, Jeff and Jordan know that Rachel talks shit about them but they also need rachel right now and are willing to look past it.. Jeff ordered Jordan to go talk to Shelly about this and make sure she understands he trusts her)

Jordan explains to Shelly that the only reason Jeff said Shelly is because Kalia told him the person talking shit will surprise him. They all know it’s Rachel so thy’re not “Shocked” by what Kalia has to say. Shelly mentions when Adam has to go. Jordan thinks they should wait until double eviction. Shelly says she’ll be ready to put him up if they need to. (Shooting Straight? perhaps) 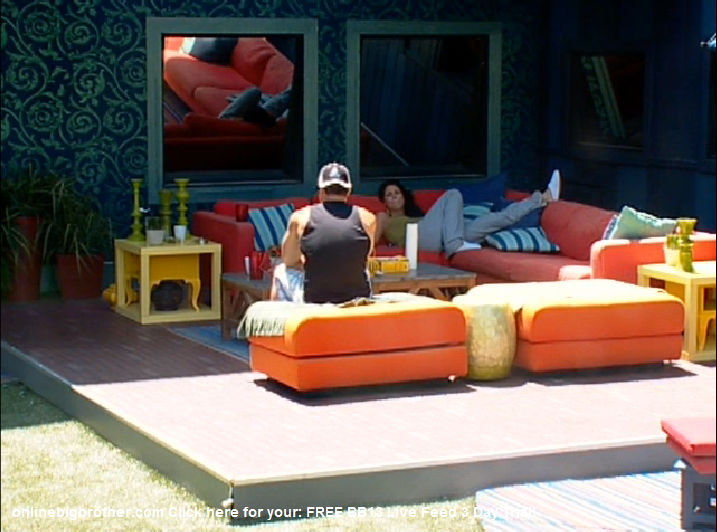 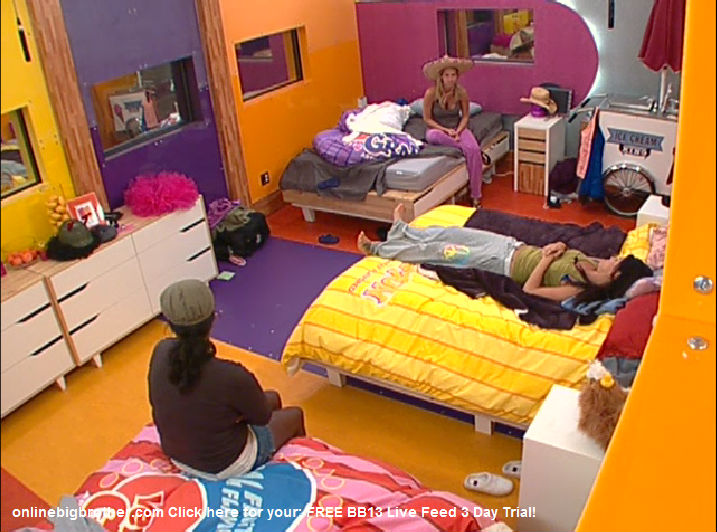 Jeff got to choose the HAVENOTS this week and he picked Kalia, Dani and Porsche!

11:50am Big Brother calls an end to the outdoor lock down. All of the houseguests head inside to discover that America voted the havenots this week to eat hard boiled eggs and Jalapenos. Porsche looks at the camera and says ….I should have had a bigger breakfast! Shelly says those Jalapenos are hot!! Rachel tries one and says they’re hot! Meanwhile Dani and Porsche are in the candy bedroom. Dani wonders if she will get real food for her birthday. Porsche says Adam did. Porsche says should I have not said …does this mean I am not nominated now? They talk abotu how they don’t want to sleep in the havenot room. Dani says that this is bullshit …that Big Brother didn’t even give us a have/havenot competition ..and to just pick 3 people at random. Kalia joins them. Dani says thanks guys for not winning HOH this week! Porsche says she wants to go read about Jonah.. Kalia and Dani laugh …you idiot its Judas… Dani says go eat a baby. Go eat a hardboiled egg. Porsche says that she almost made it without being a havenot this season. Kalia leaves. Dani tells Porsche that Kalia is going to be miserable this week… 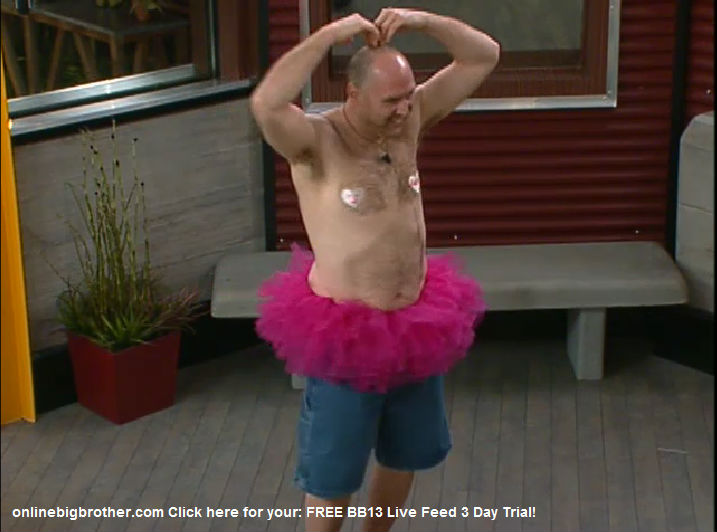 8:35am Shelly wakes up and starts her morning routine of smoking, drinking coffee and then cleaning the bbhouse. At 9:30am Big Brother wakes up the houseguests. Rachel is out in the backyard talking to Shelly. They discuss how their legs are sore from last night’s HOH competition. Dani goes into the bathroom where Adam is.. she says that the washroom smells like cigarettes. Adam says he just had a smoke and then went in there. Dani asks you pooped cigarettes. Adam says yeah. Dani says of all things I though you would have pooped bacon. Adam then grabs Jordans Tutu and goes into the candy bedroom to do a dance. Dani tells Kalia to go back to sleep until she has a better attitude. Kalia tell Dani to go back asleep. Adam then heads out into the backyard for another smoke. Meanwhile, up in the HOH room Jeff and Jordan wake up and start to get ready for the day. Jeff talks about wanting a big breakfast. Jeff asks Jordan if she has anything for the laundry. Jordan says all she has is her unitard. Jeff says good point. Jeff asks what time did she say …10:30am? (Have/HaveNot competition?) Jordan says yeah. Jeff heads down to the kitchen to make breakfast. Rachel is in the kitchen cutting up a melon. Jeff, Adam, Jordan and Rachel complain about being sore from the competition.
Sign-up NOW and watch the houseguests live!
Click here for your: SUPERPASS – 3 DAY Trial! 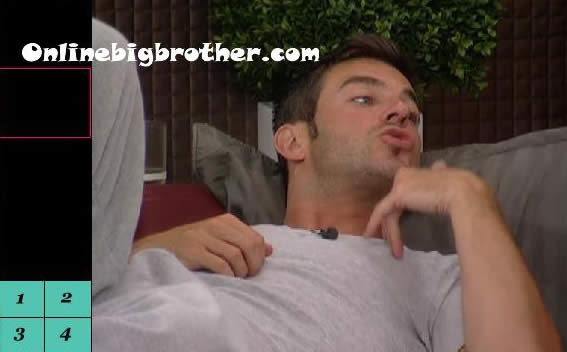 Big Brother 13 live feed Gallery for August 19th 2011. Each minute we take a series of screen captures from each Live Feed cam in the house and upload them to our Gallery every 10 minutes. This system runs 24/7 expect thousands and thousands of Screen Captures every day. Alerts are sent out via our Twitter account @BigBspoilers and Facebook page. 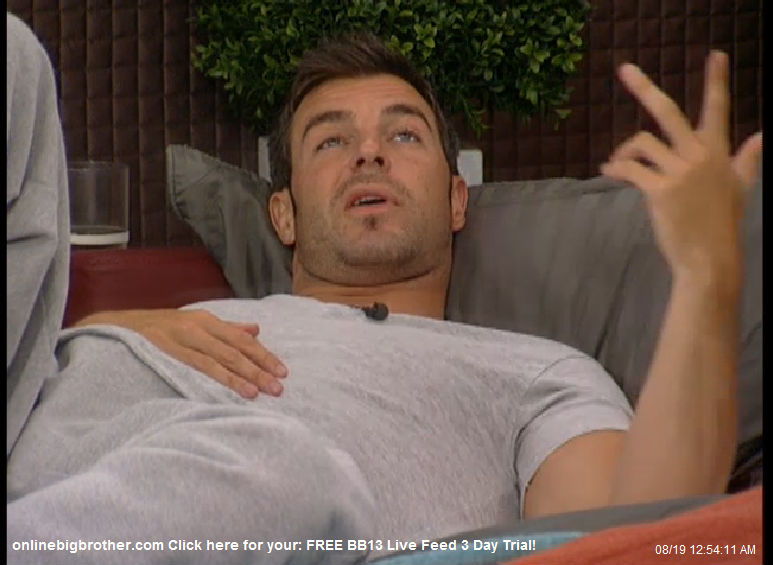 12:10am Jeff and Adam head down from the HOH room. Adam goes to the metal room and Shelly asks him if he already went up there to kiss butt. Adam says yeah. Dani says shocker. Rachel comes in to the metal room and says that she wants to go to bed. Shelly tells her there are new sheets in the dresser if she doesn’t want to use the ones Porsche had on the bed. Rachel grabs new sheets and then questions them about where her little beanie dog is …if anyone has seen it. Everyone says no. Rachel glares at them. Jeff comes into the bedroom to grab his clothes. Porsche asks him if Jeff and Jordan want to be alone or if they want to play 20 questions. Jeff asks oh down here? Porsche says …or up there? Jeff says aren’t you guys tired? Porsche says a little but I napped right after. Jeff heads up to the HOH room. Jeff tells Jordan that at least up here you don’t have to put that thing on to go to the bathroom. Jordan says I hope not. Jordan goes to head downstairs and tells Jeff she has one more day and then she will be done with this stupid thing (humilitard). Meanwhile down in the metal room. Shelly and Dani start talking about being called into the diary room and big brother cuts the live feeds. Rachel tells them if they find her do they can just throw him in the havenot room. Rachel is huffing and puffing around.