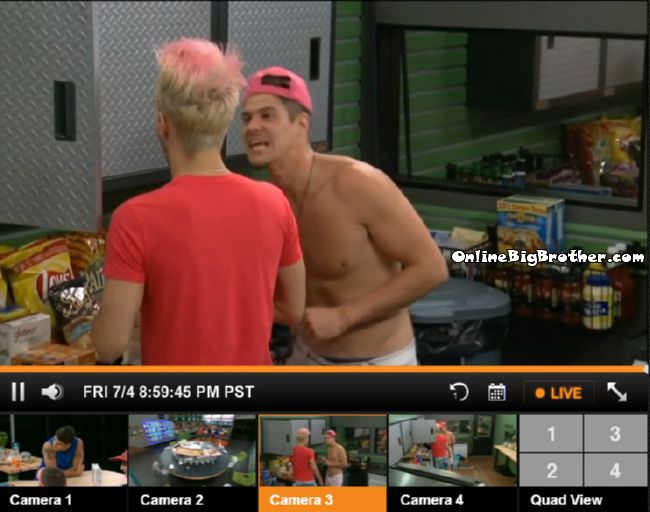 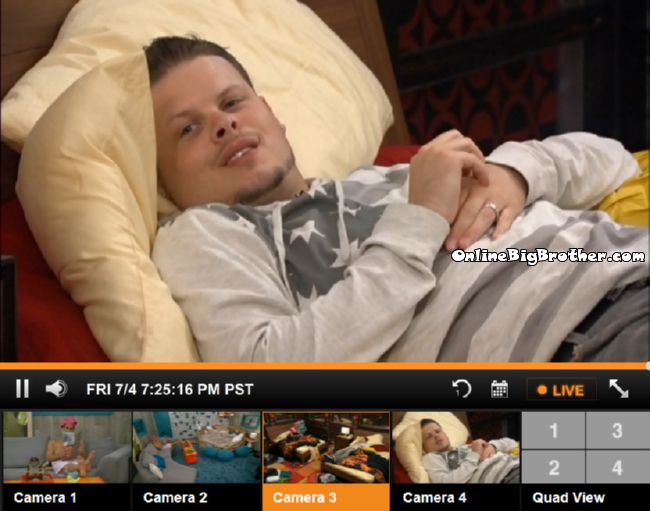 7:26pm Fireroom Derrick and Frankie
Talking about POWPOW being a “Sinker” not a floater. They know Devin has some side deals with Hayden, POWPOW and Donny.
Frankie – “He’s bringing f***ing people in again.. now we can’t put up Hayden, Donny and POWPOW.. we’re going to have to put those people up soon”
Derrick thinks POW is going to blow it all up. Frankie has spoken to everyone in the house and they all say Devin is controlling everyone.
POWPOW comes in 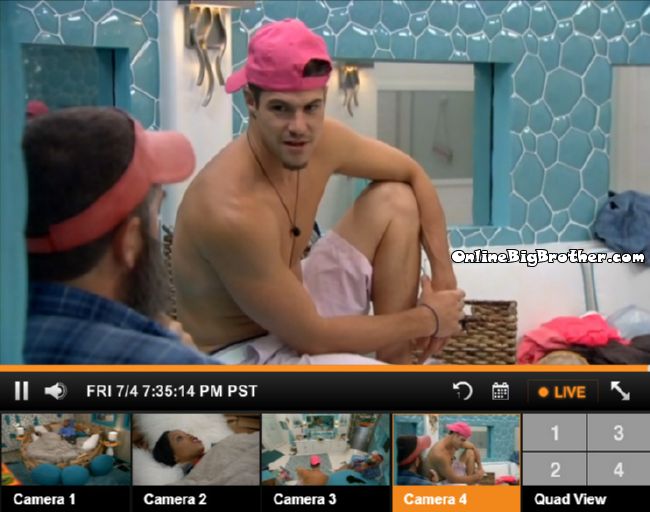 7:35pm Donny and Zach CAm 3/4
Zach says it’s clear Brittany is the target and it’s too early to go against the house.
Donny says if they can get 4 boys and they each have an extra person they can sawy .. (basically a brigade)
Zach thinks its too early to pull off something like that. Donny doesn’t says the way it’s going right now the powers that be will keep winning comps and the majority them will soon become the minority.
Donny – “You better get it while the getting’s good you got to harvest the fields while their ready”
Donny isn’t going to brown nose to Devin, Zach says one of his strengths is brown nosing. Donny’s crew would be Cody, Donny, Zach and Hayden. Zach hears what he says and agrees with it but thinks it’s early to be doing that. (Hmm heard a lot of that before)
Zach says he’s good friends with Frankie but frankie is upstairs a lot and he’s working the entire house.
Zach says he doesn’t want to get bullied “I haven’t yet and I don’t plan on it”
Zach thinks Devin is going to stick to his word they are safe this week 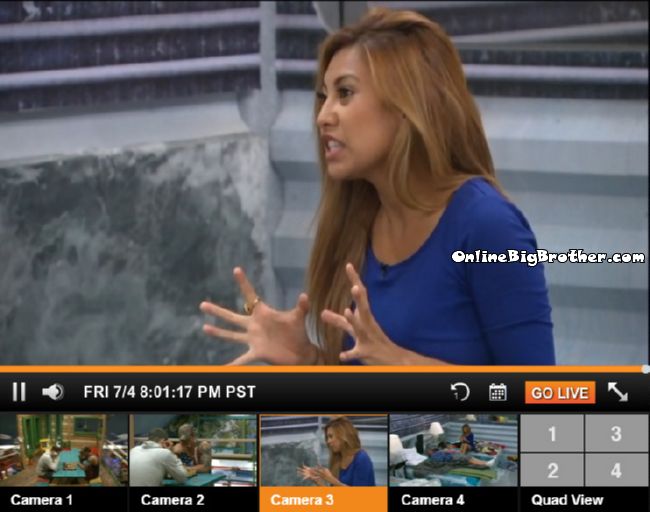 POWPOW says if she wins HOH and puts Devin on the block would it be the best thing to do
Donny thinks so
POWPOW thinks Amber is with Devin because it makes no sense for her to put up HAyden and Nicole.

POWPOW says she cannot stand Devin she wants to grab all his protein shakes and dump them down the toilet, “He thinks he’s this big intimidating guy argh I just want to Argh”
Donny – Just grin and bear it
POWPOW says Caleb is also close to Devin.
POWPOW wants to say something to Devin. Donny advises her not to tells her to hold it on in. Donny says POWPOW is getting put up because they think she’s going to lose the competition. If POWPOW gets put on the block next week she’s going to call Devin out on this sh1t. She just hoipes someont other than Caleb and Devin wins HOH. Donny thinks it’s going to be difficult, donnt suspect some of teh poeple are throwing the HOH. POWPOW only trusts Donny and jocasta, Ambers her friedn but POWPOW doesn’t knwo where her head is at.

POWPOW mentions that Victoria Is rude at everybody.
POWPOW really treasures her friendship with Donny. Donny laughs asks her what her friends will think. POWPOW says they’ll like it but they would probably have thought she was close to someone more upbeat like Zach.

Donny “with your brain.. henf it is written down it would jog your memory. I’m good at taking tests when I see A B C and D cause I can see the answers.. I can do them I can pass them without studying”
Donny “If the Big guys say you are safe you are probably safe”

Try the feeds for free.. help out OBB and get them using one of the links on this site. You can go back and watch everything we showed on this site. A live feed subscription comes with access to the Big Brother Archive letting you rewatch from day one. It’s a pretty sweet setup!
FREE 2 Day TRIAL! The ONLY $26.99 to watch the ENTIRE Season of Big Brother 16 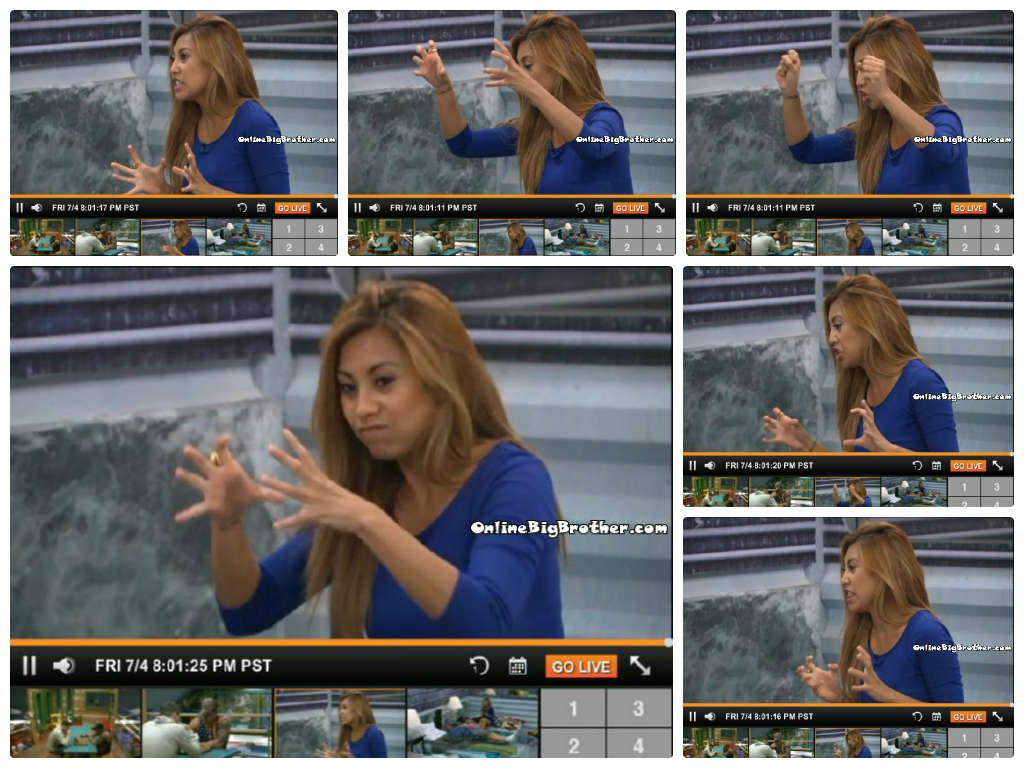 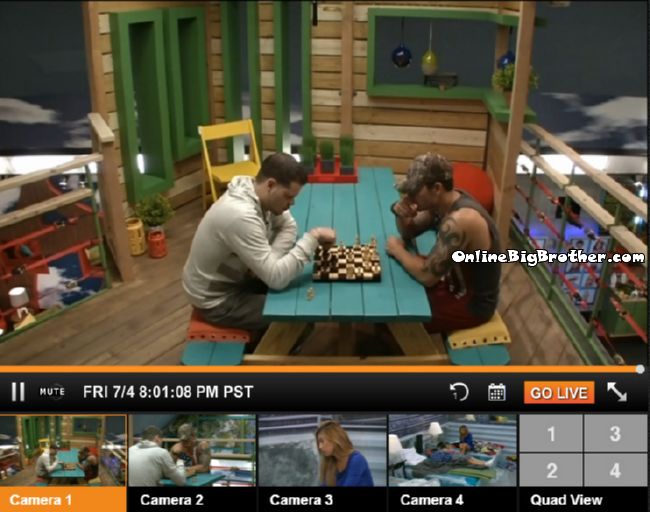 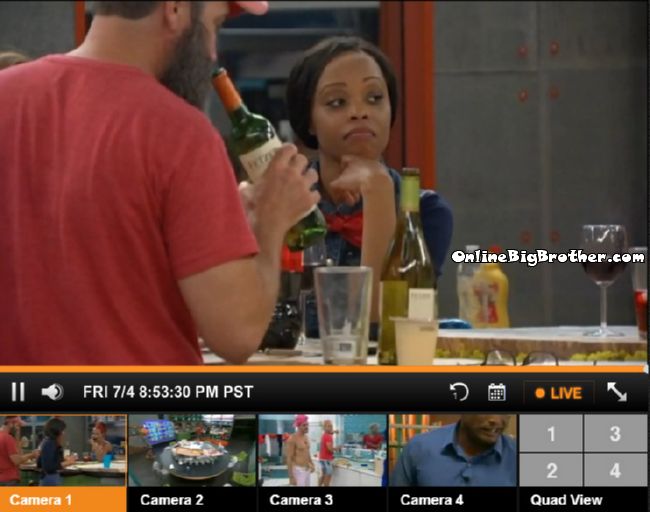 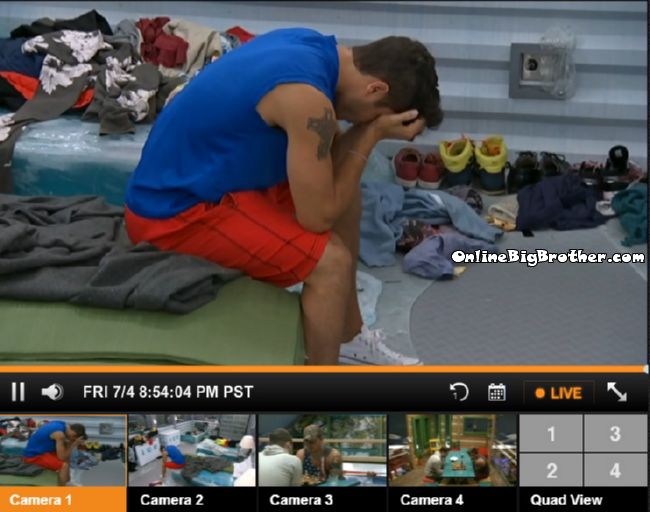 9:00pm *Zach and Frankie Storage room
Zach brings up Donny wanting to take out Devin and forming an alliance against him
Zach say Donny hates Devin “I was bullied and it pisses me off” Zacht thinks theres a good chance it’s going to be Victoria and Brittnay up on the block.. If Devin wins POV Victoria goes up if Brittany wins POV Victoria goes up.
Zach – “Lets get rid of Victoria.. We reel in Brittany we reel in Donny and we take out Devin.. Am I thinking too fast we want him gone next right..” (Zach’s getting really hyper)
Frankie – “No” 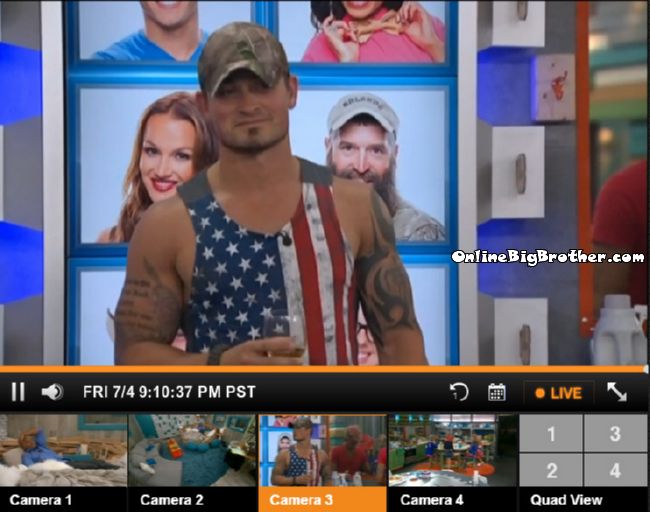 9:11pm They got a bit of booze
Caleb – “The last time I fought someone….”
Hayden jokes “They were dead”
Caleb says it’s been a long time he never fights never he’s more inclicned to buy a guy a drink and talk it over. 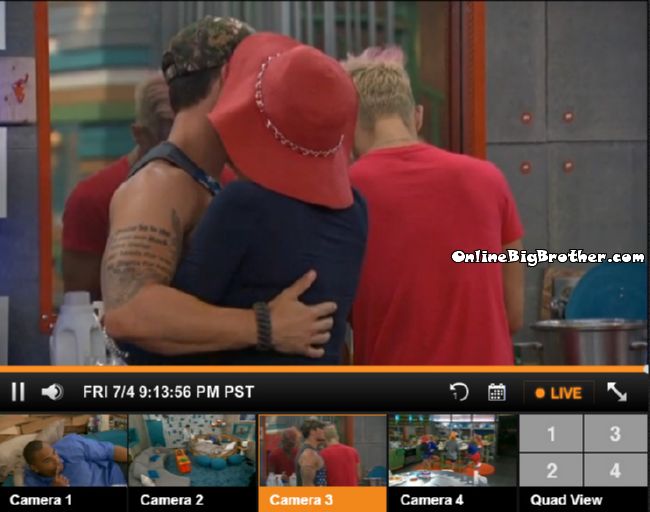 Victoria goes in give Caleb and hug and a kiss 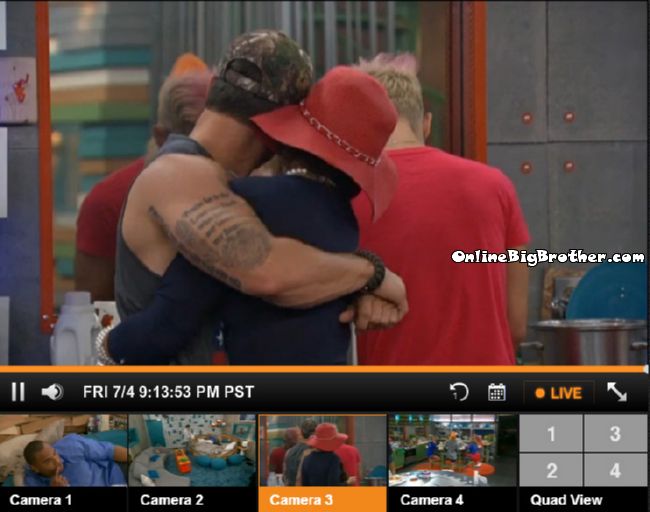 Where the vote is
?

Why was Cody even crying?

Call me sentimental, but I think Cody was crying because he likes Brittany & doesn’t want to see her leave. Heck, I like Brittany too, if for no other reason than that she doesn’t buy Devin’s B.S. (& that doesn’t stand for “Bomb Squad”) & anyone that Devin wants to go – I want to stay!! And I have to give a shout out for my guy Donny for finally playing the game! Some of his quotes have been spot on: ie: “You better get it while the gettings good – you got to harvest the fields while their ready.” Amber did disappoint me with her nominations of Hayden & Nicole – but she DOES like Donny – so I’m still hoping she will grow some. And one last thing, after last year’s Helen’s infamous “It’s too early” – NOONE should ever say that again!!!

This is the thing people aren’t realizing, Derrick advised Amber to put up Hayden and Nicole, NOT Devin. Derrick’s advice was solid. It would of been a bad move on Amber’s game to have nominated Jacosta, Donny, Victoria, Pow Pow out of the “floaters” in the house because they all like Amber–Jacosta, Victoria and Pow Pow consider Amber a friend–They will have her back.

Amber couldn’t put up Christine, Zach, Cody, Derrick, or Caleb because those are her Alliance members.

Nicole isn’t particularly close with Amber and secretly hates Amber. Nicole was a smart choice to go up–unfortunately since she pulled herself off the block that can very well come back and bite Amber.

Hayden was the only guy that Amber could really put up. He isn’t in her alliance, and although their close, nominating him wasn’t going to set him off against her than say like nominating Derrick or Donny would have done.

Never have we seen so much crying by men in the house! Are they all cycling now? PMS?

It would be stupid to turn on Amber….because if the HoH competition are split by gender….Amber is always going to be the favorite to win….and once they turn on her..she will not feel guilty putting up two guys….they will appreciate Amber when Nicole win this Hoh coming up because she’s the 2nd favorite to win comps….and like Derrick says he nervous about Nicole…….and Nicole hates everybody except Christine because she’s prettier than her..and Cody because she wants to sleep with him……When Nicole win you are going to see the bitch side come out…..

100% spot on analysis. As long as HOH is split between guys and girls Devin bringing in 2 girls looks like a good idea. Turning on Devin and thus Amber looks like a really bad idea short term.
I cannot see them doing guys versus girls very long a certainly not the season or until jury as an example. Ag has to see the house dynamic and know 1 group is going to dominate this mother!
Watched BBAD last nite and I declare Amber as dumb as a sack of rocks. Talking about who she wants protected in her other alliance. Pretty yes but a BB genius she is not. If they were smart they’d target Nicole to free up Ambers comp ability competitiveness. Or starting next week the bomb guys go up.
Also on BBAD what was all the time spent on who to nom. You got 6 votes and both HOHs. Pick 4 live bodies target 1 with a backup. Play POV deal with the results. Pick whose leaving vote Thursday week is done. It isn’t rocket science with these numbers!

Cody is such a emotional paranoid pussy….crying because Caleb stretch his shirt out……this dude is such a pussy….just say hey Caleb stop wearing my shirts…instead of talking behind his back……also telling Zach and Christine he’s going to hit Devin…..when we all know Cody is punk and he is not going to do sh*t….Out all the guys he is always the one gossiping like a little a girl and always talking about losing it…..you can tell he was pampered growing up and grew up soft……a real man was just say hey Caleb your stretching my shirts out…instead of crying and telling Derrick he hates Caleb now….this guy is bitch made..

Where are the rest of the HG’s? Are they asleep?

Sleeping, chit chatting or off camera

I swear the dudes are too emotional this year. I would never think that 3 of the biggest guys in the house would be so emotional and cry more than some of the girls ._.

Ok Donny is either really smart or really observant and just holding back! He may be America’s favorite this year.

Still dont’ like Zach he seems like a cocky arrogant butt of a coworker the type that never does any work but kisses the bosses you know what so much his lips are lubricate with prep H!!

sunnydee
Reply to  new to BB 14

I don’t like anyone who gets known for sleeping all day. Maybe it’s a strategy, but I don’t like it. It doesn’t make me like them better, if i liked them before. I liked amanda and mcrae before they started spending all day in bed.

Please tell me that’s a joke about Cody crying over stretched out T-shirts? Again a mention of Victoria being rude to people. Why doesnt someone tell her shes being rude and to cut it out. Maybe shes one of those people who pretend they don’t know they have no manners because people don’t say anything to them. You know the ones.

Dudes, don’t you see? Zach acts just like Dan and is the smart one. Devin is a guy rachel, he causes trouble, I want him out the house. Is it Cody and Brit together or cidyand nicole.? Caleb, dude I really hate you now. Stop this amber stuff,and stop being racist.amber you think you smart but your not. Think again with the moves you make. I want Brittany to stayyyyy. Donnyissome funny guy. He’s my favorite. And Cody I thought he was but not no more

What’s Caleb doing that’s racist? If it’s Devin-related, everyone feels the same about him always flying off the handle, regardless if he’s white or black. I can see racism has nothing to do with it.

Victoria tried with Caleb, she tried…haha