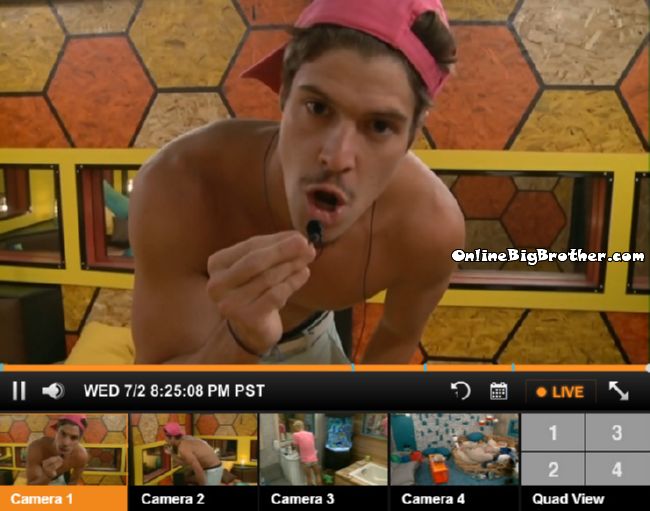 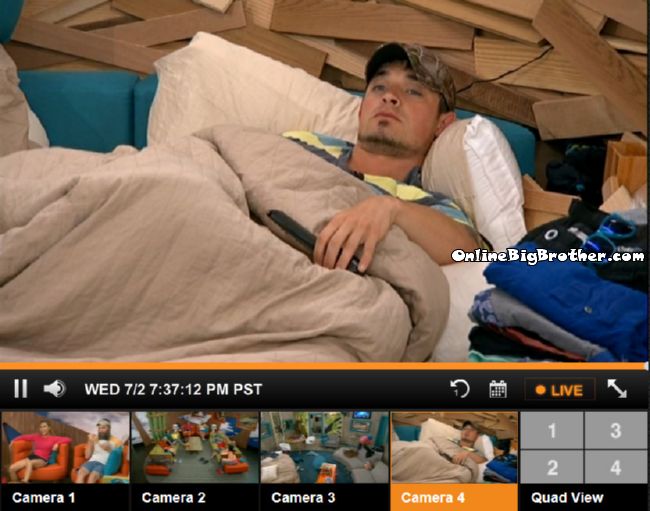 7:37pm HOH Caleb and Frankie
Caleb says Amber has spent more time time with Devin than with Caleb. Caleb thinks Devin is more selfish than him. “All the time he cooks he basically cooks for himself”
“Maybe when she said that about the whole .. you know when you get to know somebody they end uip being all about themselves .. and only care about themselves.. Maybe she was talking about Devin and Devin misconstrue it saying she was talking about me” ( Ohh gezz)
Frankie is sure the truth will come out and they will find out what Amber is talking about. 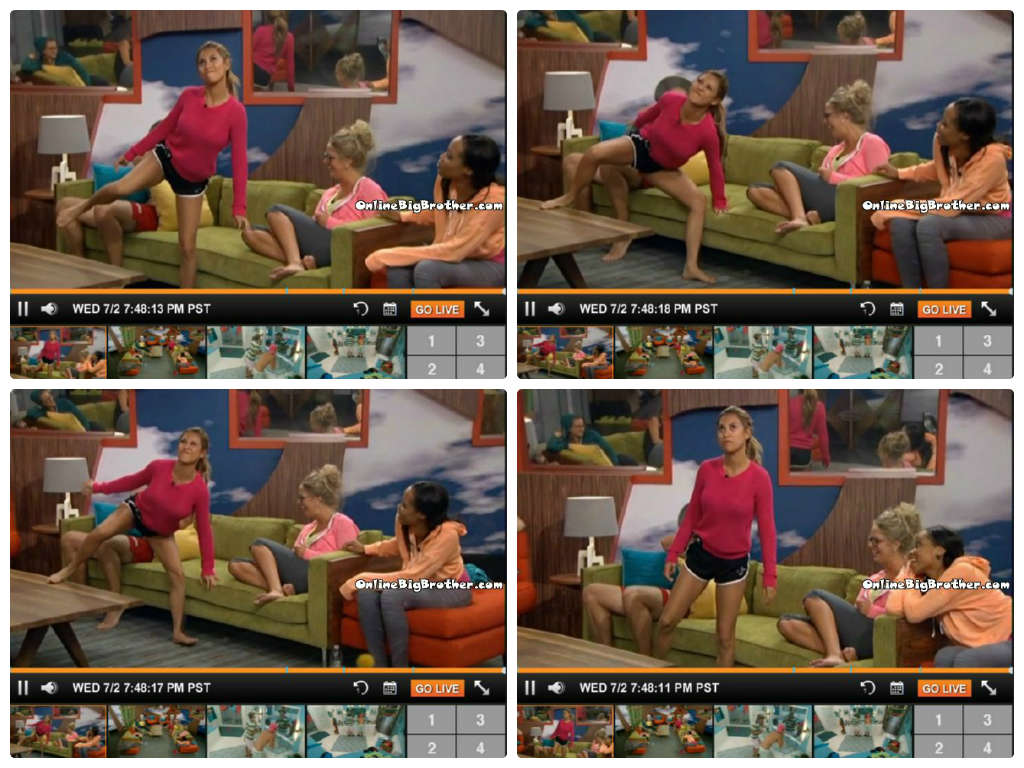 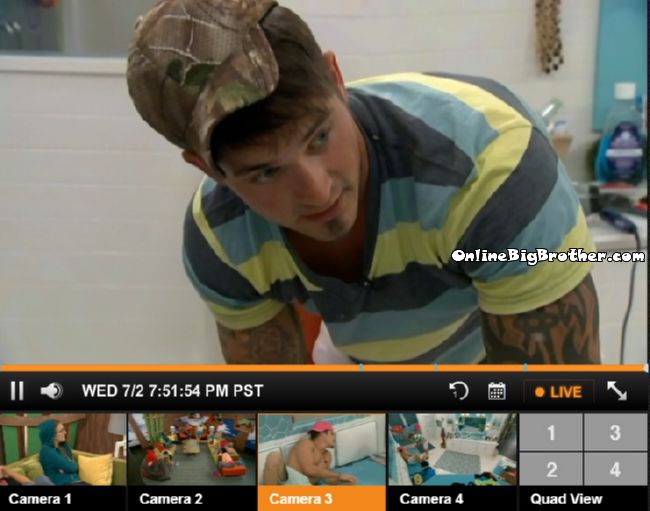 7:52pm Caleb and Zach
Caleb saying he’s been nothing but a sweet nice guy so he’s thinking Amber was talking about Devin not him. (Explained more above)  Caleb “Maybe she was talking about Devin and maybe Devin thought she was talking about me”
Caleb brings up how Devin only cooks for himself but Caleb on the second day made dinner for everyone and made Amber the Cookie Dough Ice Cream.
Zach asks him if he’s talked to Amber about this. Caleb hasn’t because Amber will freak on Devin about telling Caleb anything. Caleb brings up Frankie talking to Amber for him in a couple days.
Caleb goes on and on about how he thinks Amber was meaning Devin picking up on every to support his theory. “At the end of the day I really don’t care” (5/6 of what Caleb says is about Amber/Devin love triangle)
Caleb says he’s going to go to Amber and tell her he will carry her to a certain point then he’s going to cut her loose. Zach doesn’t think whats coming from Devin makes sense. He thinks Caleb needs to find out exactly what Amber said before he does anything.  Caleb “For 2 straight weeks I’ve treated her like a queen .. You wanted ice cream with cookie dough couldn’t find the cookie dough and gave up so I took time out to get the cookie dough.. on paper we looks good.. I’ve been nothing but sweet and nice to everyone in this house”
Devin rolls in..
(I think Caleb has lost it) 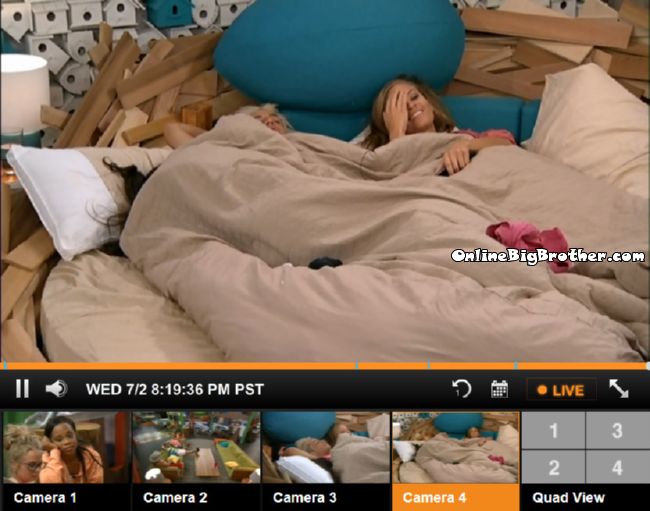 8:18pm Amber, Victoria and Frankie HOH
Amber is going to give up her bed to one of the Have nots Girls
Victoria – “WHAT.. Amber where are you planning on sleeping”
Amber – “Obviously the have nots room”
Frankie tells her to just add another girl to the regular bed 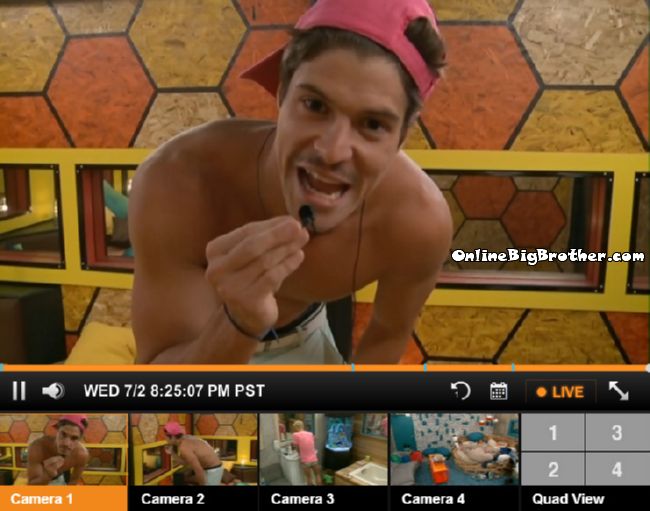 8:25pm Zach Beehive
Zach talking to the camera about Victoria
“I kinda want to keep her in the house as long as possible just to keep me entertained all my energy is going toward ruining Victoria’s Life.. I Hate her with a passion.. everytime I turn around she’s f*** staring at me with these ugly disgusting eyes.. I know she talks shit about me thats fine talk shit about me whatever.. She’s as rude as f*** I hate her She acts like she’s so deserving ”
“I grew up in in the south of FLorida with richest most snotest girls every live.. None of them compare to Victoria She is the most rude girl in the world I hate her right now I’m planning on how I can ruin her life”

Go back and watch any moment of teh BB16 Live Feeds -> It’s all archived! <- TRY IT FREE: Live, 24/7 Big Brother house feeds, subscriber-only voting and more — don’t miss out on all the behind-the-scenes action! 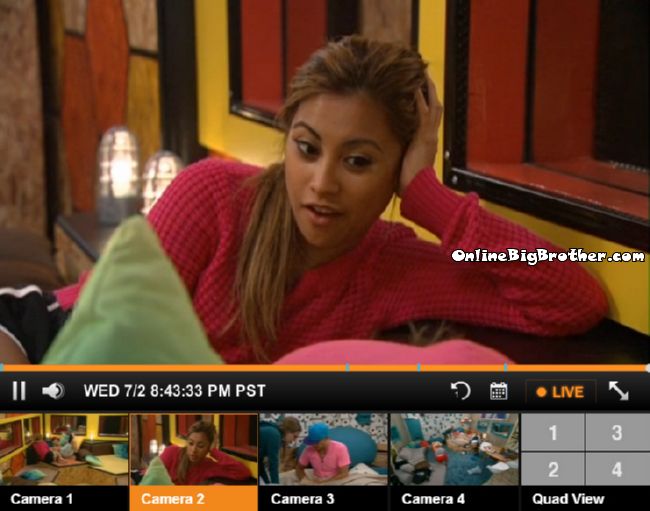 8:44pm POWPOW and Zach Beehive POWPOW saying she wouldn’t put up Amber ,Frankie or Zach. Zach wonders who Donny would put up, Zach thinks he would up him up. 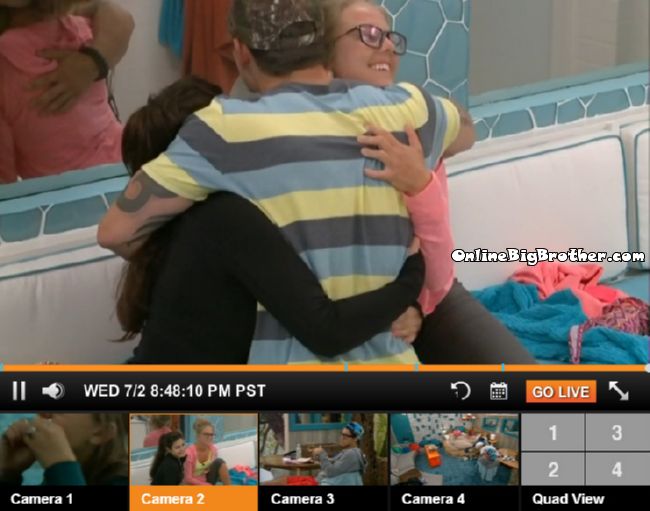 Caleb comes in hugs the girls then lifts POWPOW up 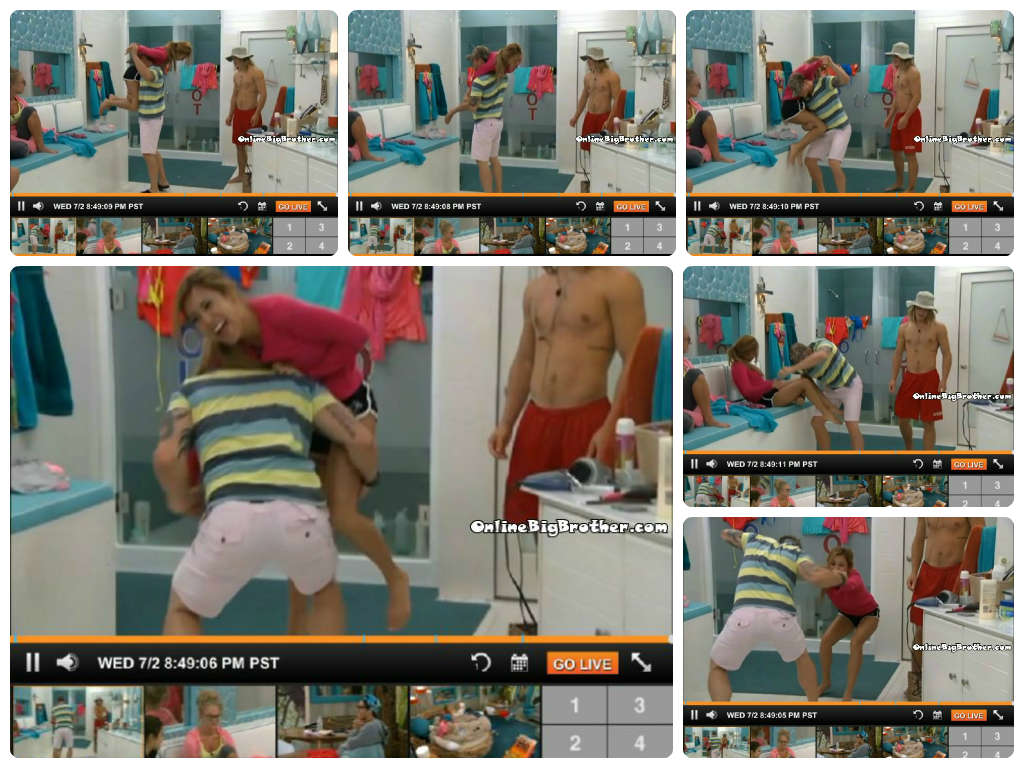 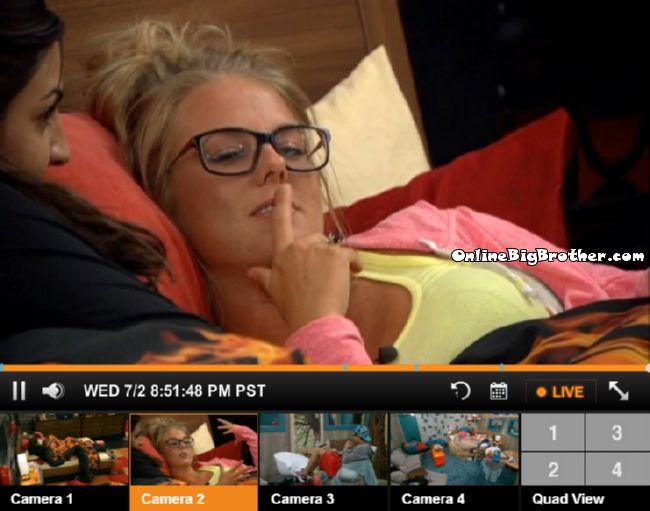 8:52pm Nicole and Victoria
Nicole says she likes to cuddle and theres a bunch of gorgeous guys in the house, “Hayden is funny and Cody is gorgeous”
Victoria – I have to tell you something that made me really mad today.. Devin call Cody stupid and a little kid
Nicole – I have cody’s back .. i’m not here for a showmance
Victoria says they asked her at the airport what she thought about Cody.. Cody is not her type
Nicole is going to stop cuddling with Cody because she doesn’t want it to look like anything and hurt her game.
Victoria and Nicole both agree that Caleb is being so nice, Nicole “I like him” Victoria “mmmhh hmmm”
Nicole just wants to make sure Victoria was mad about her cuddling Cody. Victoria says it’s no problem at all.

Where the vote is
As of now Joey is going home..

I would pay one of these houseguests to smack Caleb across the face and tell him to shut the hell up. I don’t know how these people are keeping sane right now hearing all this Amber talk.

I am now convinced that BB production is purposely picking houseguests with serious mental disorders.

i was hoping they’d learned their lesson with the whole aaryn, amanda, ginamarie debacle, that they couldn’t have seriously mentally ill people on the show: which I interpret as being anyone who is on prescription meds ffs

I can’t take it anymore, I literally CANNOT stand Caleb anymore with all his Amber talk. He is insane.

Thank you Simon & Dawg for all the updates!! Caleb needs to go home! Any girl that wants him after this season is gonna be a mess herself! Devin needs to go as well! For now I would like to see Christine, Nichole and Frankie F3!.maybe Cody too ;-)

I am as well but curious why you are? It might be for a different reason than mine but i feel bad for frankie

If everyone took a drink for each time we heard Caleb mentioned amber, we would all be serious alcoholics

Cody is a b*tch……this dude gossips like a little girl…
Devin is a douche bag……….
Caleb is insane stage 5 clinger….

If the camera guys are going to put all their focus on Caleb talking about Amber all the time… then they should show how crazy he is on the show … they didnt put him in that light at all tonight. I’d much rather them show more of Hayden and the others in the house being silly or sleeping for that matter than watch Caleb and Devin discuss Amber for another minute.

CalebMarie is a 13 year old girl trapped in a man’s body. BB is picking people with mental disorders.

Someone needs to tell Caleb to shut the hell up and that he’s being creepy as f*** about Amber. She’s not into you dude! What’s so hard to understand??

Caleb got a good cut in tonight’s episode. Watch 20 minutes of live feed or read these posts and see the true side…….

You know that one person who needs all the attention out of the group? Yeah that’s Devin….. He’s fooling himself if he thinks he’s charming.

Clearly Joey isn’t a fan of the show. I CAN’T BELIEVE SHE DID ALL THAT SHE DID THE FIRST WEEK. Attempting an all girls alliance and THEN confessing it to the two rival meatheads in the house. WTH! WHYYYYY!!

And there, folks, is the real Zach coming through. I knew it wouldn’t take long. Of course, Victoria has shown some very aggressive behavior as well…so maybe they are very much alike and that is what is bothering Zach? Now Caleb, on the other hand, is starting to sound like the stepford wife who kept repeating “I’m a very lucky girl” over and over when she broke. I keep expecting him to start looping “Amber…cookie dough…Amber…nothing but nice…Amberrrrrrmmmkksshhhhhhhh…” and then smoke puffs out of his ears as he breaks down.

I’m convinced Zach is doing everything for production and to get on camera.
No showmances –> hit on Frankie. Production also told the rest of the house which is why Cody and Brit played it up and Nicole said he’s yours, maybe PaoPao with the “behave” AND Victoria, who almost let it slip (ask you about one person…). Frankie must know it’s not genuine… Why else would he refuse?!
Since Frankie won’t advance the showmance, production and/or Zach are going the villain angle, so he’s hating on Victoria.
I think Zach is just going to do ANYTHING to make production happy and to win.
And I love him!

He’s somewhat right about Victoria though. She has a lot of good qualities, but she definitely is very conceited and it comes out all the time.

Personally I like her in spite of that, but I still recognize the truth in what he’s saying.

He saw a lot of himself in her, but i don’t care i personally love both of them.

Why must Victoria smack her lips? Disgusting. She needs to remove her mic when she eats……which is most of the time.

Okay Caleb and Amber are talking after she was crying. And Devin is going to have a house meeting once they come out from there conversation. Devin also confessed to Donny that it was him that got him on the block and Caleb didn’t want to put him up. This meeting should be good.

But I wonder now that Amber is talking with Caleb will he go full blown She belongs to ME! Its a risk.

God I hope that someone calls Devin on his bs, because Devin knows good and well that the only reason he’s called a house meeting to “confess,” is because he wants to get ahead of the mess he created. I really hope someone gives him a piece of their mind, either Donny, Caleb, or Amber although I doubt they will, but hopefully someone like fiesty Pow Pow or Frankie will call him out. Devin intentionally lied on Amber because he saw their coupling romantic or not, as a threat to his game. He also turned on Donny even though he came to Donny in the first place to have an alliance, and then breaks it!?

Now he wants to cry “I just want to play with integrity.” Yeah right ughh not too mention he actually said that he doesn’t like Amber because she’s not a white girl! Uhhh dude you’re black. He’s so concerned about what his daughter will think of him when she grows up and sees this yet he rejects a biracial girl for not being “white” enough, when his own daughter is biracial! I mean that’s seriously twisted stuff, he should be thinking about that.

I don’t even have the live feeds but I admire Simon and Dawg for being able to sit and report what Caleb is saying about Amber because it is driving me crazy just reading it. There is seriously something wrong with this dude. Amber is clearly not interested. Where in the world did they find these people?! Zach is acting mental saying he hates Victoria. I swear all of these people are insane.

Teri B
Reply to  BBLover23

Caleb is such a hot mess.com!

Caleb creeps me out with that dark blank stare. I just hope BB has anything sharp (knives forks) out of reach, Caleb may go postal any moment. Hope the house guests keep one eye open while sleeping…… especially Amber!

I am not sure if Dawg & Simon allow us to post links to sites? I came across this interesting site, Knoxville news… the folks there are concerned for Amber’s saftey, good stuff.

You kinda get the feeling that zach is trying too hard at being the next dr will?