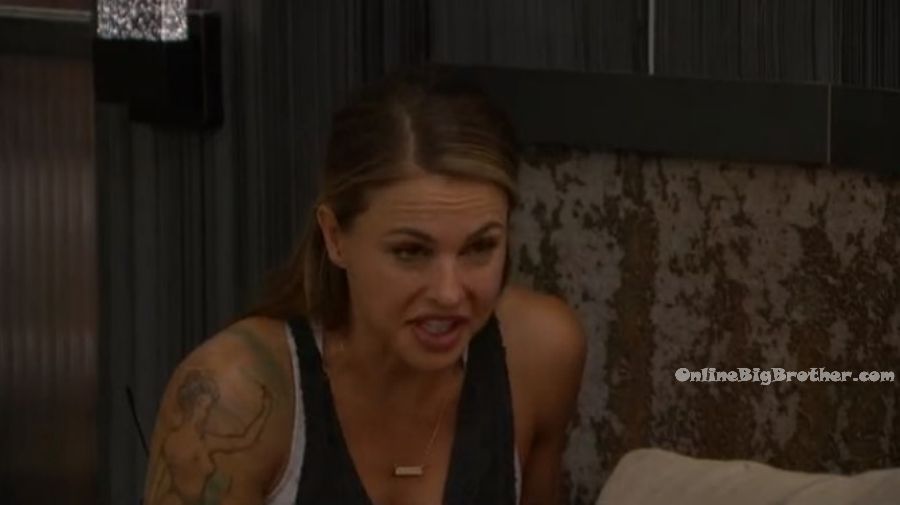 5pm HOH room. Christmas and Memphis.
Memphis – if its me, NicoleF, Tyler, and Dani next week playing in the thing we have the ability to pull ..save two people in our alliance automatically. The odds are in our favor. Christmas – who else would be playing? Memphis – NicoleA would be the only one and she might not even be here next week. You know what I mean. Oh and Enzo but he is just floating around like a birdie.. I am not worried about him at this moment. In my decision making right now .. I see Nicole she is the only one with the safety suite that is on that board that is not in our alliance minus Enzo. Christmas – Kevin asked me why didn’t you save somebody that has a safety suite pass? And I was like I honestly didn’t think about it. I was just so excited to play and to win. Memphis – you would rather save Ian and he can be a vote. Christmas – I bought him a week. He didn’t feel safe so he played. Memphis – I just want to make sure you’re feeling the love from me and our alliance. Christmas – I am. Memphis – with these 6 people I honestly think that we could get to final 6. Memphis – and I have a good relationship with Kaysar. And you do with Ian. Keep it open. I think we’re in a good position. We’re good. Christmas – I want to be clear .. I have complete trust in our alliance and I hope me not using it on one of us is ok. Memphis 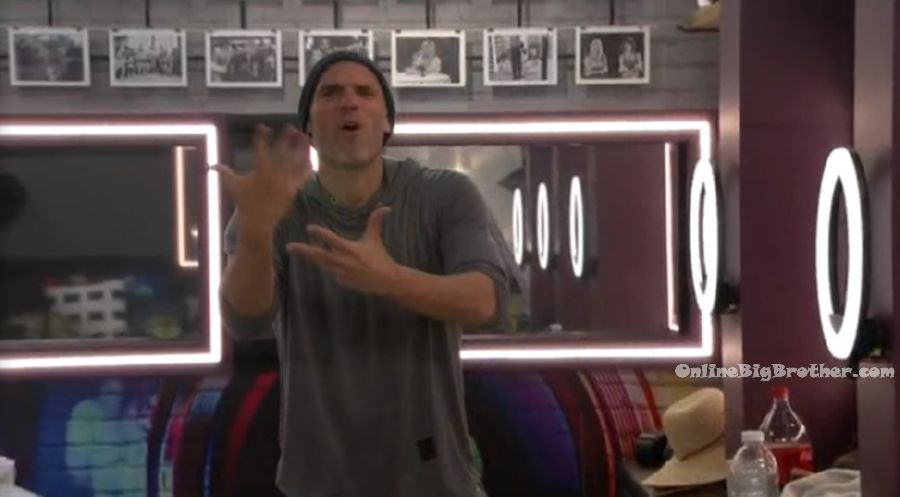 5pm Bedroom. Cody and Enzo.
Cody – I mentioned Janelle’s name and I kept saying positive, positive, positive… Now I’m going to back track. I f**ked slipped because I was getting a little worked up because Janelle was turning sh*t and I know she’s doing sh*t. We might be projecting this sh*t on Janelle but Dani is the smartest f**king player. Enzo – no, I like her. We’re going to use her. We’re going to use her to get to where we got to get to. I think Day might be going up! Cody – I think so. They both laugh. Cody – but here is the thing she is a number for us so we need to make it like she is not the target. Enzo – if I win POV I am back dooring somebody. Cody – if he puts her up we cant let her go. Enzo – we’re back dooring someone. We should call that alliance “The Connect!” I like that. And then we have “The Core Four”. The Connect is me, you, Bay, Day. Cody – I am getting lost. 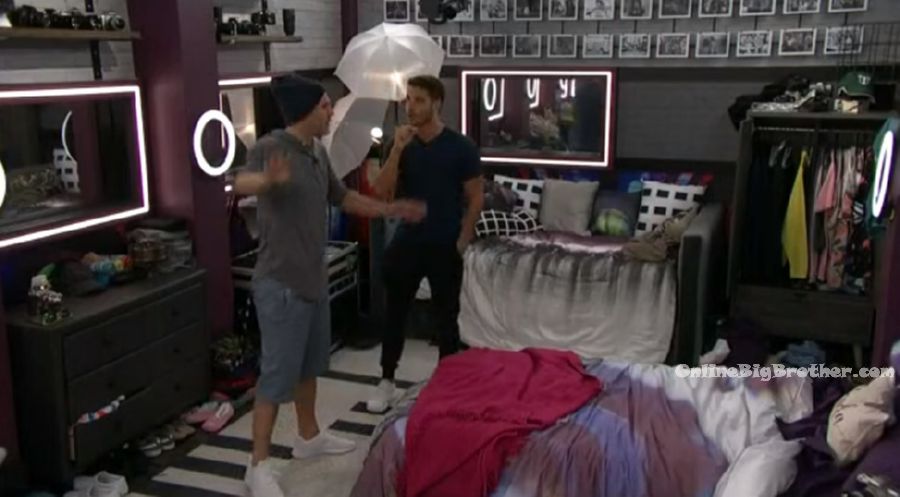 HOH room. Bay and Memphis.
Memphis – I haven’t decided yet.. If I decide to not pull your name and put you on the block then I want that reciprocated at some point in the coming weeks. And that’s not hey we’re going to build this thing together.. look our communication is great. I try not to build those types of relationships until the second half of the game.. when the power starts to shift in the game. When I say lets do an eye for an eye .. if I keep you off the block and keep you safe this week then I am going to want that favor returned at some point. Bay – okay. Memphis – and there is nothing more to it than that. If we decide to work together down the road then we will have a different conversation at that point. I don’t think building a relationship like that in the beginning is smart because no one is going to stick their neck out. Bay – I can do that. I like that. You’re in it to win it. And I know I’m going to win an HOH coming up. I’ll protect you. Memphis – and if I win HOH again ..they’re going to add up and I might just ask for money. Bay laughs. Thank you for thinking about that. 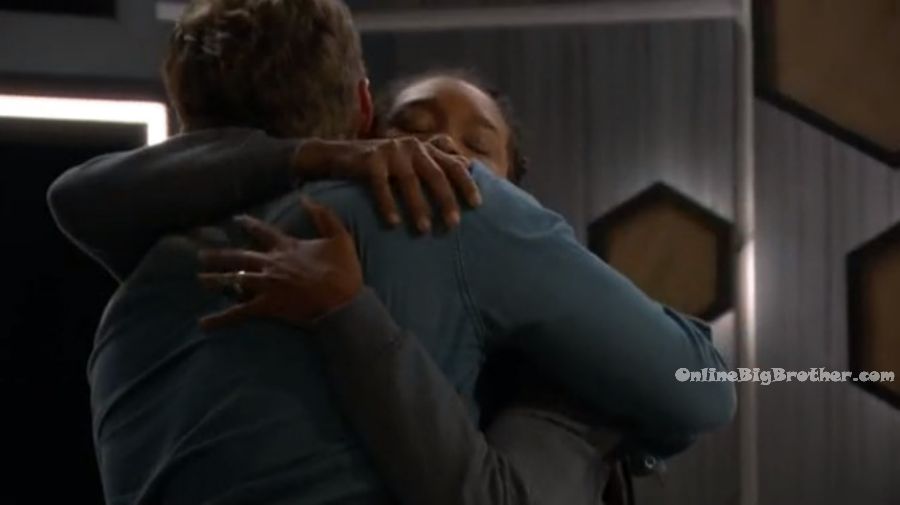 Bedroom. Dani and NicoleF.
Dani – this is the stupidest thing .. she (Christmas) is like it doesn’t matter who goes up.. HELL YEAH IT MATTERS! She puts up who he wants and we just go okay! lets go! That is so stupid. Nicole – who would you want to go up? Dani – I just don’t want DaVonne.. NicoleA would be the best one for us. Nicole – cut the tail off. Dani – Janelle keeps coming up trying to get information out of me. She is trying to get information out of me but not saying anything. I am trying to give her anything that isn’t anything.. Like trying to think of things just so she tells me something but she isn’t telling me anything so why would I tell her anything. Who is Janelle working with other than kaysar and NicoleA? Nicole – I think its just them. Dani – but DaVonne is saying they’re not. Nicole – DaVonne has played this game a lot. She’s played twice. She has a reason to lie to me. Dani – Has Janelle said anything to you about me? Dani – no 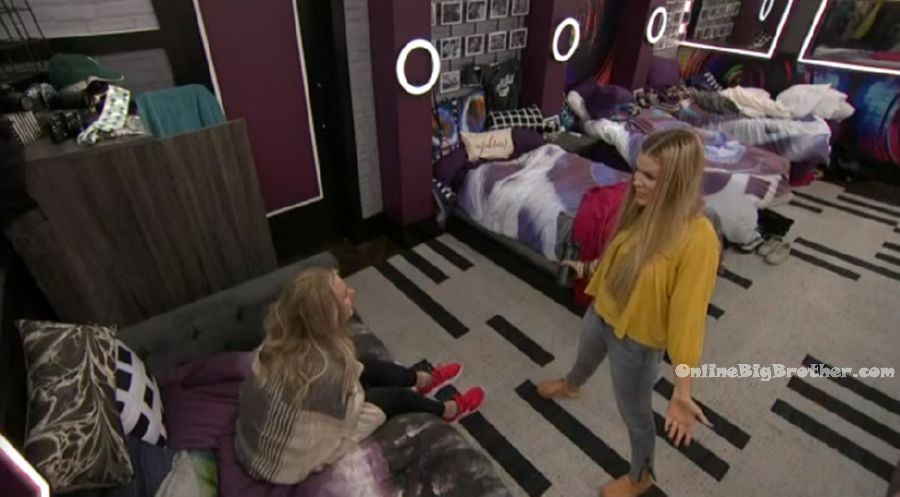 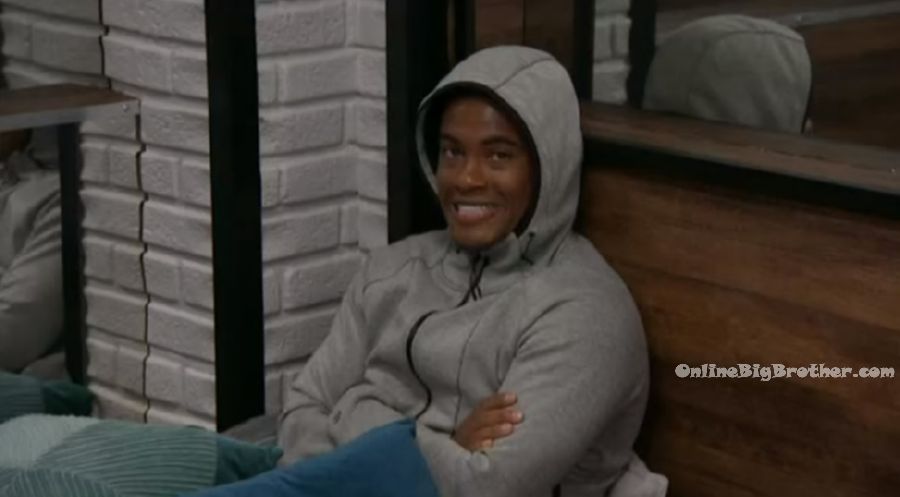 Cant stand Enzo.... Im just not sure if putting him up would even cross anyones wildest dream right now. Hes such a rat.

What is all this yammering about “cut the tail off”… Don’t these people know that you’re supposed to cut the HEAD off of a snake or else it bites you in the ass? Jeez-us.

LOL i know .. why cut the tail off? … if you’re not cutting the head off don’t bother saying it.

Snakes rarely bite people ass, they strike the face towards the eyes.

Cody to Nicf:
this is the second time you pulled shit on him (Derrick). the first time you came back you called him.
Nicf:
no. he called me. He called me and asked if was me…
Cody:
and you lied to him again.
Nicf:
yeah, I did.

Context unknown.
Tinfoil hatters: on your marks get set…. CONSPIRE.
:)

Serious note.
As a former sidekick, Memphis doesn’t know how to lead in the game.
He’s playing like everyone stand in place and move when i tell you to move.

Dani, Tyler and Christmas aren’t going to deal well.
Nicf is too insecure and needs constant reassurance or she spirals.

Cody, another former sidekick that didn’t do any cerebral heavy lifting in his season is also going to think he’s in charge. Closest to Memphis of all of them, and talks to others like he’s pulling a con on Memphis at every turn.

Oh. This is a GREAT alliance. I think i’m going to need more popcorn. Eventually.
Try to edit this as cohesive for the episodes. I dare you.

Dear every player in the house: If Kevin gives you his opinion… do the opposite. Wrong EVERY damn time.

AND
Memphis has chosen to Nominate Season 21.

By the way nicf: being called a frootloop dingus is in NO WAY SHAPE OR FORM the same as calling a black guy BOY during a nomination.

Robert
Reply to  another name

So I was right. He wasted his nominations

I’m going to put this here as well. others in the house were making it sound like memphis called him boy or sonnyboy.
DAVID said he called him BUDDY.
I am going to now retract my boy comment and apologize. I got triggered when another houseguest insinuated he was called boy.
He was called buddy as far as David is concerned. It wasn’t regarding a racial insensitivity, it was regarding the legitimacy of David as an all star.
I got triggered by re-tells.

How long are nomination ceremonies normally this seems super long

really depends but usually about 45 minute. It seems this year everything takes extra long. probably due to covid precautions.

He hasn’t said he is.

Memphis may keep Janelle and Kaysar…them plus him and his six would be his dream final 8. If he can reach this final 8 and have Bayleigh at 9 (who does also connect with Janelle), he would sit in a nice position to gain votes to keep him amongst most, if not all, of the HGs in that scenario. I think him not speaking much to his US6, he is testing their patience, testing their trust and loyalty…all factors that he will want to know before the second half.

If he backdoors anyone, it will be to weaken one of his 6 in the long game. K and J will be able to give him more perspective of the information between moved amongst the house and his Usual Suspects.

Whatever is happening between him and David, could also be him playing up drama for tv. Both instances would have come during known tv taping. Him talking about his GBM to Keesha for his humour. He was a cocky and an ass during his season, just he stayed loyal to the most loved Dan, so most forget. He was also overshadowed by bigger and louder personalities in a different time and style game.

People want drama and then when it occurs, they cry foul; then the tears start.

If Dr Will played in this age, the majority of the newer fans would be wanting the death sentence for him.

another name
Reply to  BB22SomeStars

Tyler is currently beyond pissed with Memphis. I’ve never actually seen Tyler make that face.
Nicolef is currently trying to equate David’s treatment at the nom ceremony as character building that will make a great storyline.
Cody is currently trying to get David to go hat in hand to the HOH to smooth things over with Memphis… who has already made one borderline comment during have nots, and then it seems went for the goal in his noms speech.
Janelle and Kaysar are telling Memphis about the Cody Tyler Nicf and Dani connections (taking credit for NicA walking in on them so he doesn’t think they talk).

Memphis’ dream alliance will be all in his head by Thursday.

Good. Burn that alliance down

I’m trying to pick up the speech from the bits and pieces they are all saying.
something about the grown up table
and boy or sonny boy or son.
for nicA i’m thinking it was something about not playing for safety when he told her to or lack of loyalty or something?
Sounds to me like extreme HOHITIS.

Seems his issue is with David being on an All Star season, because he hasn’t actually played big brother from Memphis’ point of view.

BB22SomeStars
Reply to  another name

I’m only trying to figure out Memphis’s thoughts…

Team J and K, all the way with Ian as sleeper.

On a sidenote: If Ian wins, does that cement him as the best player ever?

For the next POV competition, I hope Janelle’s name is picked and she smokes the competition because I have a feeling Dopey (Memphis) is gonna put up David and NicoleA; and you know she’ll save NicoleA!! Janelle and Kaysar really need to win the next HOH to really scare the shit out of the side of the house!!! #oldschooldominates

If she saves NicA, Memphis might put Kaysar on the block.

Who are the noms?