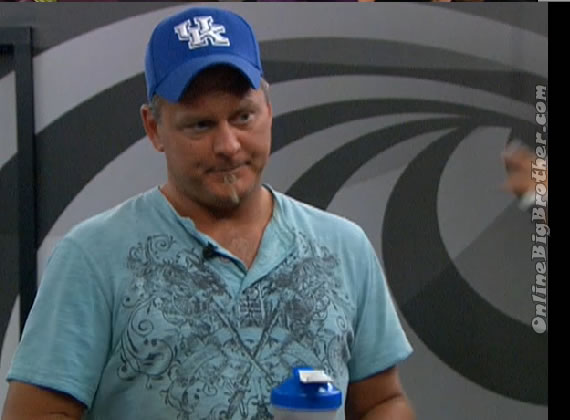 10:44 cam 3-4 HOH Dan, Joe. Janelle, Jenn, Boogie
Joe comes up tells them that JOJO’s taken all the cigarettes back because ashley told her she;s going home because the house is voting against her. Boogie laughs says there is going to be some fun tonight.
They all run downstairs so Joe can confront her about the 2 packs of cigarettes. Dan notices Jenn isn’t too keen on egging Jojo on. He take’s her to the side to play chess. Says he doesn’t understand why people need to rub it in her face.. She’s going home just leave her be. Jenn completely agrees says she doesn’t want to torment people when they are down.

11:12pm Cam 3-4 havenots JoJO and Joe Joe tells her He’s 100% going to vote for her to stay and everyone knows it. Jojo give him back the 2 packs. Joe: “you’re one vote away.. work on ashley” Jojo is just worried about looking like a fool having given him 2 packs for a vote then he doesn’t vote for her. joe understands. 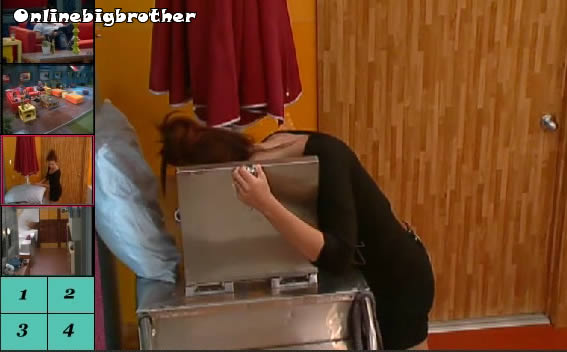 9:00pm Bathroom Porsche and Shelly Shelly tells Porsche that rachel found Mr Quackers. Porsche tells her they hid it in the HOH toilet tanks. Shelly saying that Adam is the 3rd person in the JJR alliance she knows that now. Shelly thinks it’s worth another shot talking to Adam to safe Dani. Shelly mentions that Adam told her if Rachel was in the final 2 he would vote for her. Porsche is shocked.. Shelly says she almost choked when he said that. Shelly says that all threw this game she’s helped Adam out, told him what to do and gave him information. Shelly tells her that in the beginning of the game she thought Porsche was a liar but it was later that she found out it was Rachel feeding Porsche the lies. 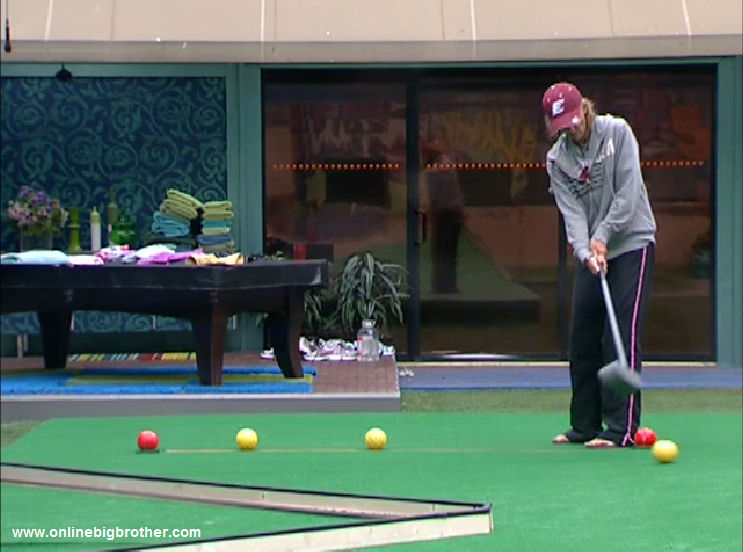 8am Shelly, Brendon, and Rachel are out in the backyard playing the mini golf game trying to get better. They set up bean bags as obstacles because they think the actual competition will be similar. Brendon gets mad and tells Rachel to take it more seriously. Brendon asks Shelly who she is most afraid of in the house. Shelly says that Cassi is talking to much and next it would be Dominic. Shelly says that Kalia is getting annoying with all her complaining. Brendon complains about how Cassi was hogging the golf game last night. They remove the bean bags because they are worried the other houseguests would see. Rachel starts to sing and Brendon yells at her to stop .. if she wants the other houseguests to wake up to Big Brother announcements …then thats a great way to do it! Shelly asks what did Porsche promise for being able to stay and get a golden key? 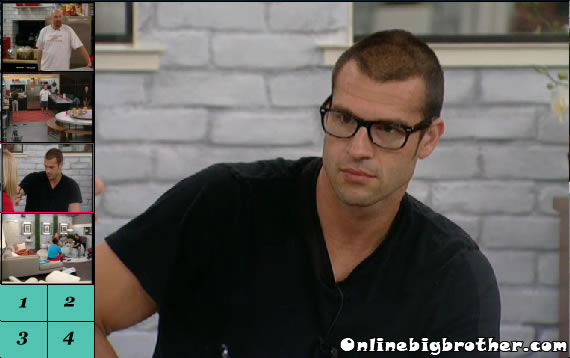 8:42pm HOH Lockdown JEff, Jordan, Lawon, Dom, Dani, Rachel, BRendon, and Porsche are in the HOH Lockdown. They are talking about the Forest Gump movie and the lines Forest Gump says. They all agree that the show was very funny. Before the Big Brother Lockdown the house guests were getting ready for tonights “trial” to find out what happened to Brendon’s turtle.

Lawon is saying one of his Releases hasn’t been signed and they called him last night to talk about it. Dani says that her number one hasn’t signed their release and she’s starting to get worried. Dom enters the HOH tells them his muscles are sore and he’s feelign sad cause he just did his goodbye messages. Dani tells him in the begining they don’t show all the messages to the best ones and the more popular houseguests. She points out that Dom only has 3 fans so his won’t get picked. Brendon comes out of the HOH bathroom Dani asks him if he pooed because she didn’t hear the toilet flush. Dom: “If it’s yellow let it mellow if its brown flush it down”.. They start talking about the court case tongiht.. Dom:”My stomach’s been sore all day” Lawon: “Did you shit?” Dom: “Yeah it’s from those burgers”

12:50am The House guests are in the backyard practicing for a competition. Matt whispers to Lane that he is going to chill in his Head of Household room and the brigade needs to assemble up there inconspicuously so they can talk. Enzo is talking about Peter Parker a spider that they named in the back […]

10:30pm Brendon, Enzo, and Rachel Taj Room Enzo working b/r yo.There going over the sab theory’s Enzo is playing very friendly to them there laughing telling jokes. Brendon is acting tough saying he got into Ragan face today and he’s not scared to get into Matts face. Brendon says CBS and Big Brother production are […]

SEE what they CAN’T show you on TV! 3 Day FREE Trial   8:15pm POV competition is setup outside for the houseguests to practice Everyone is waiting in line to give it a shot. basically it’s like a giant pinball machine without the side paddle you pull back on a piston and fire a […]

10:30ish Backyard feed leak we can see production preparing for tomorrows competition 10:30pm – 11:15pm Jumanji Room everyone except for Hayden and Kristen who are in the Cabana room. They are doing a Big Brother rap, Enzo’s the drums and Ragan is doing the rhymes. Some house guests are throwing in their own raps.. sounds […]