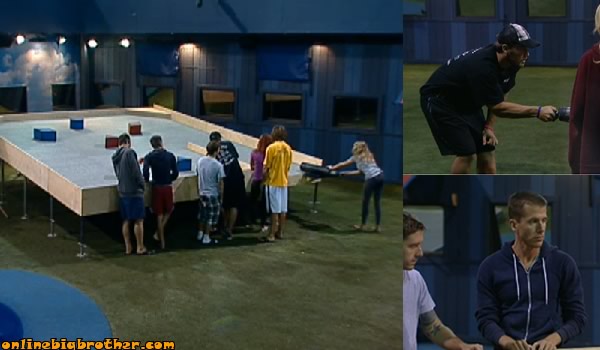 8:15pm POV competition is setup outside for the houseguests to practice Everyone is waiting in line to give it a shot. basically it’s like a giant pinball machine without the side paddle you pull back on a piston and fire a ball up onto the course.. Its early but from what I can see Hayden and Lane are doing the best. Apparently they were told by production that they can only practice for a limited time.. they start bashing Lydia from Big Brother 12.. everyone laughs. The general opinion is it’s 99% a crap shoot.. Lane thinks he found a sweet spot but everyone else thinks it’s just a random game. Rachel being friendly to the girls asking Kristen to come out and play with them .. giving them complements when they do well generally being as fake as she can.

8:41pm taj room Matt and Enzo Both are worried what would happen if kathy one. The POV competition is a crap shoot contest anybody can win it. Enzo is concerned that Rachel and Kristen are all friendly now yesterday they were screaming at each other. He asks Matt if she’s acting.. Matt isn’t sure. Enzo says if Kristen win we gotta talk them into putting up Kathy. Matt says they have no other choice.. he thinks that Lane will go up or possible himself. Enzo says they gotta start working kathy to not use the POV if she wins it. Both agree that it’s going to be a tough one to pull off if Kathy wins the POV. Enzo: “you look like your about to give up whats your wife doing on a friday night when your not around” Matt has no clue he mentions it’s his bday tomorrow. ragan joins them. Matt asks him if he knows whose going up if one of them on the block wins POV. ragan has no idea, Matt asks what if kathy would use it if she won. Ragan is pretty sure that she’ll take kristen off. Matt says i can’t believe kathy would use the POV that is so ballsy. ragan “who really knows what will happen things change fast here ”

** they were told the POV players are picked in the morning **

9:28pm Cabana Matt explaining to Hayden and Lane that the POV is going to be about points. They ask him how he knows, “just a hunch” Matt begins to explain.
“Its all going to be slots ”
“The highest point in the middle then lower.. lower… lower ”
“Everyone is going to go an the lowest goes out”
“You need to watch how kristen was doing it, she’s hitting it in the middle”
Hayden thats my plan.. he explains some angles he’s been trying hit it on the top then it can only fall one of three ways all of which are favorable (they’re explaining to each other drawing things out with their fingers on the cabana room blanket) They break up their strategy talk.. lane says he’s heading to the shower asks Matt if he wants to join him…

9:45pm house guests are either in the backyard playing with the POV or in the kitchen doing dishes/cleaning up.

I hope lane winsor britt/. who is playing pov anyway?

Well we know Brendon can’t win because it looks like a game of coordination and dexterity and he lacks both of those. This looks like it may be set up in favor of Hayden.

Whose names do you think Production will put in the bag tomorrow? If it is HOH choice, of course she will pick Brendon. Who else?

Oh, Brendon’s name will be in there for sure!!!

I guess it really doesn’t matter. No one would take Kristen off. And, the guys are too aftraid that they would get put up so I don’t think they would even take Hayden off. Kristen and Hayden pretty much have to win it for themselves.

That is true! Kathy said if she won, (LOL) she would use it on Kristen to save her. Wouldn’t that be hilarious?! Honestly, unless someone pulls a sneaky move, it’s safe to say this is a done deal!

Its live TV…..multiple names would bust the show after all these years….everyone says this, IT’S ALL LEGIT.

As much as I would love for all the Brigade Boys to be in the POV competition, I doubt they will be. But how awesome would it be if they were! lol go CBS, make it happen!
but seriously, i would think it’ll actually be: Hayden, Kristen, Brendon, Ragan, Lane, and Kathy.
I think either Hayden or Lane have the best chance of winning this game.

Scallywag
Reply to  The Excitement

As HOH Rachel is one of the six playing. She’s not on your list.

That does look like it will be hard. I use to be a good PinBall Player but I don’t think I could win at that without a whole lot of luck.

Annie said it best in Week 1…if you don’t get them out now ( Brendon and Rachel), they will carry each other to the end. I personally do not like them, but they are the powerhouse to beat…she has the brains and strategy and he has the brawns.
Matt showed his true colors ( yellow!) when he did NOT put them up. Getting rid of Andrew was a power move?? Andrew showed me nothing….he had info at his disposal to use, and he didn’t. He made no alliances and basically, putting his faith first ( nothing wrong with that) cost him the game.
I DO like Enzo, Brit, Lane and Ragan and I am ready for them to make some moves. Those are the ones who can and will make waves if they won HOH or POV. Enzo just cannot catch a break, but he has shown he is someone to reckon with on a physical/endurance level, based on previous comps.
Hayden is a good player….lays low and he was the only one with the balls to put up B/R. He will go far.
Kristen and Kathy….useless and incompetent, although I am glad to see something sparked some life into Kristen.

There trying to give hayden advice to win. If they use pov I HOPE ANOTHER MEMBER OF THE BRIGADE go up.Backfire on those lames.

I hope Kathy gets to play the POV, wins, saves Kristen so that Rachel could put one of the brigade up
is the best case scenario!!

I hope they send that lazy ass home next week, she lays around on her back complaims “I’m tired!” with with foreearm across her forehead ALL the time. She is thew ultimate hypocrite. Trashes Rachel and Brendon everytime they walk away……I hate hewr and Rag…on ….however you spell her name!…or his name….HAHAHHAHAHAHAH!

Watching the After Dark program, I think Brittany and Lane are the “friends” from outside. They are always telling each other they are stupid, but not in a mean way. Brit says that she is only playing the game for Lane and herself. I have been thinking this for the past couple of weeks because of the way they act towards each other when nobody is around(or looking.) Started when they were playing pool with each other and the way Lane kept looking at Brit. Probably way off, but I just have a gut feeling about this.

I should add that the “stupid” they call each other has been going on from nearly the begining. To me, you don’t call someone you don’t know “stupid” and expect them to know they know you are joking when there is no smile.

Well, now that I think about it a little more, Britney does look like an animal that has had a light shined in her eyes. That is how Lane shot animals. Maybe that is how he caught his girlfriends, too.

lol. like a bunny rabbit in headlights before it gets ran over by a monster truck.

She certainly has paired up with him. I don’t know if that long time things is true, tho. Many have said it isn’t. Annie had made it up.

yeah, i think it was a made-up story from the Saboteur. i’m nearly convinced it’s fake.
but all have you know my theories were all over the place:
-Britney and Kathy being mom and daughter.
-Lane and Hayden being brothers.
-Andrew and Ragan being gay lovers.
-Hayden and Kristin being siblings.
and one of the newer ones:
-Andrew and Brendon being friends.

Simon
Reply to  The Excitement

I know for a fact that brit/kathy are not related.. the rest of the pairs who knows.. yo

How do you know?.. just curious

I was wondering if anyone heard Lane slip up and call Kristen K.C. That made me think maybe Lane and Kristen are long time friends. He accidentally called her by a nick name. He was talking with Brit last night when he said it and then quickly covered it up and said: er, um Kristen…..

I’m all for Enzo, Brit, Lane or Ragan winning.
Rachel is the bitch from hell.
Brendon is like a fish out of water with a woman ( well…that woman anyway ) and he is starting to gross me out with his put-up acting.
Matt ( geezzzz, I hope they make sure he washes his hands before reaching in the fridge, he would have made a perfect match for Nasty Nat. I wish they would all throw, drag or whatever they have to do to get his ass under the bus. I liked his wife immediately after seeing her in the tennis shoes in the wedding pic, she must see something in him, however misguided.
Kristin and Hayden, I hope they live happily ever after, I just can’t get past his ” even a caveman can do it ” looks. He does seem sweet though.
Kathy needs to just go on home with all that whining ( we all have a sad story, believe me )
I hope Hayden wins the POV, removes himself and they put Kathy up :)

Matt has to let go of his dick, it’s nasty, he is touching food and everything else in the house.
I hate Ragan , he is a floating two faced. Lane is just really as dumb as I thought. I actually like Enzo. He does have a personality. I like Brendon, but he has to dumb Rachel, she is a distraction and it keeps him so uninformed.
Being Philly guy myself, Kristen is a bitch and will not ever forgive Rachel. I hope Kristen gets the boot, she is a hard-ass girl. It finally came out.

The show should tell matt to leave his dick alone. I have never seen a guy hold it dick so much. except for “ball players” and he sure as hell is not an athlete! He’s is just rude, doing that in front of the men and woman. I believe he think he is sexy?! hahahahahah! he is a hunchbacked little troll.

I have a strong feeling that Hayden will win this competition.
I mean the Brigade Boys play pool all day, and this is the closest thing to it.
Hayden’s got this one yo.
Unless of course he decides to throw it. But why would he want to do that?