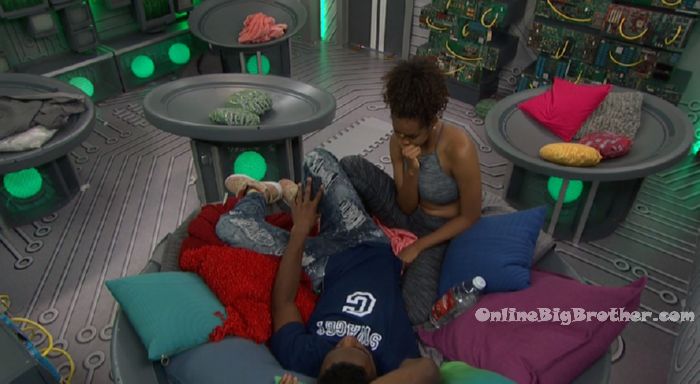 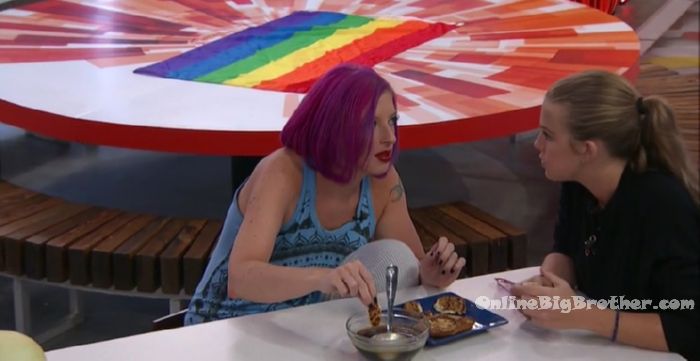 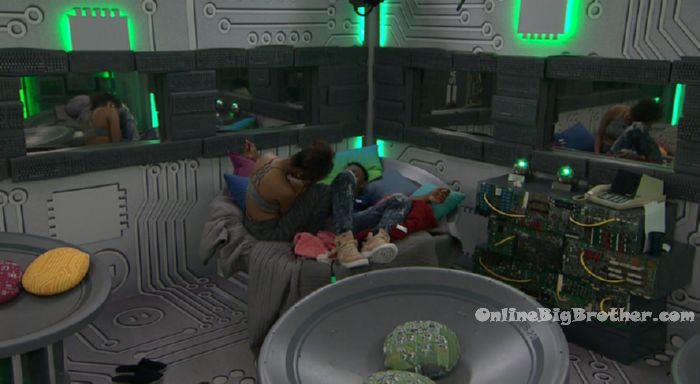 See what they can’t show you on TV Try the live feeds for FREE!

2:05pm Havenot room. Bayleigh and Swaggy. Swaggy – I was getting closer to Sam. Bayleigh – I think Sam is mad at me. I think she just wants to stay away from certain people. Swaggy – she literally blacked on Brett today. Brett get the f**K away from me. Don’t touch me! Get the f**k away from me. I am dead serious. But me she will hug me. We need the veto to be won by Rachel today.. and Rachel will not use it. Bayleigh – what if Tyler wins the veto and pulls him (Winston) off? Swaggy – then he knows where he stands with us and he goes on the block next week. Swaggy – Kaitlyn better be scared because she hasn’t talked to me once since she’s been HOH. Then next week she is going to go back to the HIiii.. I don’t care what Fez says .. oh you’re going to f**k up our numbers if you put Kaitlyn up. Big Brother blocks the feeds. Swaggy – if you’re not trustworthy, you’ve got to go. You’re fu*king up my game. She is a hypocrite because she cries.. Big Brother blocks the feeds again. The only people I am worried about are Bayleigh, Fez and Haleigh. And obviously in my mind you’re the only one I care about and they others can go when they need to go. The king and queen are really running this sh*t! Think about it! We come up with all the idea and then present it to them. The ideas start from here. Bayleigh – I did not come up with the idea to put up Scottie. Swaggy – no we did not.

2:23pm HOH room. Scottie and Tyler. Tyler – even if he (Winston) wins it (veto) .. another one of them is going up. Scottie – if the four of us can’t beat them… I’m guessing she’s (Kaitlyn) going to put up Angela. Tyler – yeah that’s what I’m thinking too. Tyler – I’m not worried about it.. well you should because you’re on the block.. I would be worried if I was on the block but you’ve got people behind you. 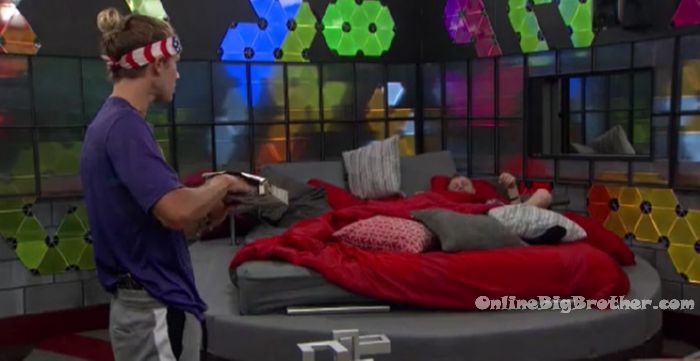 2:27pm Big Brother switches the feeds to Big Brother re-runs for the power of veto competition..

Rockstar & Hayleigh “really like Sam” now? That was a convenient switch from two days ago when they voted her out.

I just saw on Joker’s that Swaggy said “If they give me a power next week I don’t even want it. F*ck you America!” Wow…

Will
Reply to  George

Who has the power?

Yeah so I really don’t get why Swaggy still thinks he’s running things lol I dunno what house he thinks he’s living in, but it’s not the BB house. I hope the Veto is used and he goes up. I don’t even need him to go home, I just want him to accept that he’s not King of the BB house.

Swaggy reminds me of Kanye

Not me…I definitely want him to go HOME !!!

My gut is telling me the swagz has the power.

Same. Strongest hint for me is that he said “f’ u, America! I don’t want the power (next week)”. If he already has it, he knows he can’t get it again anyway. I have a hard time believing he wouldn’t want a special power, and way more importantly for “call me Swaggy C”, bragging rights! 😉
(Simon, did you get my email?

Will
Reply to  Simon

No way he has it. The moment he got it we would have 24hrs worth of his face in a camera telling America how awesome he is and how much he runs sh$t. He would shower himself in his own perceived greatness.

Granny
Reply to  Will

I agree. I don’t think Swaggy is capable of keeping that secret.

Tyler could, and so could Kaycee. Angela, too, I think. Scottie might have it. My guess is Tyler has it.

Absolutely, Saggy’s head would have to stay outside and he’d be nonstop talking to America about how we finally got it right. Tyler and Scottie could keep their mouths shut. I’m not seeing Kaycee enough for her to pick up votes. I think Angela would tell Rachel. I think it most likely that Tyler got it just because he was the most visible and made an entertaining move.

I’m thinking Swag has it also. I might be giving him too much credit but he seems to be going too far the other way like he’s trying too hard to convince people he doesn’t have it. That’s just my feeling. Even if swag does get on the block. I don’t see him going home yet. I would be shocked if he did. Sure was hoping Tyler would get it tho.

Swaggy doesn’t have it. It would be good for drama if he did, but nah there is near zero chance he has it.

I don’t mind if noms end up staying the same. I would not flinch if either Scottie or Winston went home. Both annoy the sh*t out of me and while Winston is a number for Angel right now there will come a time soon enough where he has to go.

#AngelaMakesTheWorldGoRound <<<<A bit much? I actually feel it is a understatement 🙂

Winston is a non-issue. This is Tyler against Swaggy. If Kaitlin gets rid of Swaagy this soon, then there no longer is any conflict. Production isn’t going to let their show go down this early. At some point yes, but not this early. We have no idea whether our answers truly are gonig to the top trending person. They will give the power to whomever they want to keep in the game. Tyler will get it soon enough.

I don’t think so because then it would be Tyler on top and Hayleigh has already mentioned his name. I think people would start to target him if Saggy were gone. After all he’s calling the shots with Kaitlyn, even Brett sees that. There are several avenues for drama after Saggy goes.

I love your love for Angela !! I love her too but I’m going to just say. Mine has nothing on yours. I respect that. Lol

I’m sure if CBS wanted to keep a douche like Paul they certainly want to keep this douche Swaggy.

I love it when Call-Me-Swaggy and Bayleigh claimed to be playing this game for America. The only thing Bayleigh has done this entire season is profess to be a princess who is too good for slop and bitch about everyone else. That’s not America’s game.

I gotta admit that Fez is growing on me, though. When he said that he refuses to throw a competition, I thought to myself… Where were you last season?!?!

I tried to give swaggy the benefit of the doubt. Had hoped he’d put his ego on check and try to play a good game.

What are they showing on the live feeds? Houseguests I’ve never seen before.

Can you help a Canadian out and tell me the trick to getting the live feeds in Ontario, I really want to watch this season please and thank you

Try to pick up an American Express prepaid credit card. I’ve heard you can find them at 7/11 corner stores. I had luck with using Paypal to sign up and pay for my feeds but I have heard that it hasn’t worked for others.

You will also need a VPN to trick CBS.com into thinking you’re accessing the feeds from the US rather than Canada. We use this one: http://hidemyass.com/vpn/r16399/

Let us know if you have any issues 🙂

7:15 BB Time and the feeds are still down. I can’t wait to see the outcome!

Since Kaitlyn is in pain with her neck/back and she told Faysal to throw it (because it would look bad for him to win two veto comps in a row, making him a bigger target…LOL) and Rachel offered to throw it to Winston, I imagine the only ones really going for the veto would be Tyler and Winston.

This much time on veto tells me it is a time challenge where they each compete one at a time.

TYLER WON VETO! 7:38 BB Time
It sounds like Cody and Jessica were involved in the comp.
It looks like Kaitlyn is going to use the veto to take Scottie down and put Swaggy up for backdoor.

Even Hayleigh tod Fez to throw it unless Winston was winning.

If Tyler won and uses it on Winston, he’s drawn the line between him and Saggy’s side. What if Kaitlyn then nominated Angela/Rachel? They’d still have the numbers and Scottie goes unless he’s able to turn Sam. Would Sam use her power for Scottie? Could Kaitlyn pull a Vanessa and change her target midweek?! I am enjoying this.

Tyler and Kaitlyn already have it worked out to use the veto on Scottie. They told Scottie they would before the veto comp and Scottie had decided to pick Tyler if he got HG choice (but Winston chose Tyler), so following through on their promise makes them golden.

Love ya granny!!!! Thanks

Granny
Reply to  Just me

Tyler won for sure? Yusssss!

Yes, he did. It was a timed comp and Tyler got the right answers on the first attempt. Rachel got 2nd place. It took Kaitlyn 3 attempts to get it right. Scottie said he tried like 20 times before he got it right…Winston is mad because he got tripped up and it took him a lot longer than he wanted.

Kaitlyn is telling Faysal and Swaggy’s crew that she is taking down Scottie (Tyler is as veto winner) and putting up Angela, but her true target is Swaggy… for now, that is.