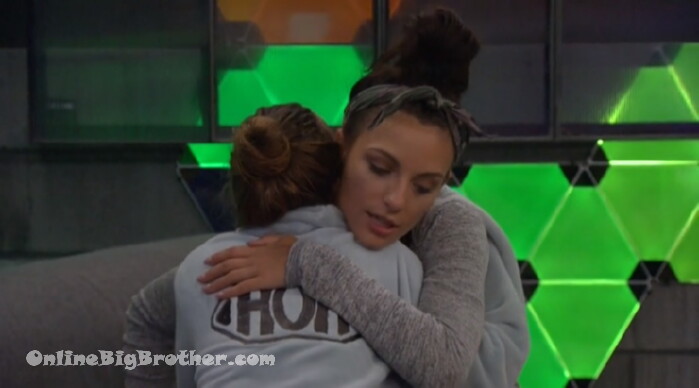 (The internet where I live was down from 9 until 2.. I will be updating this post with everything missed) 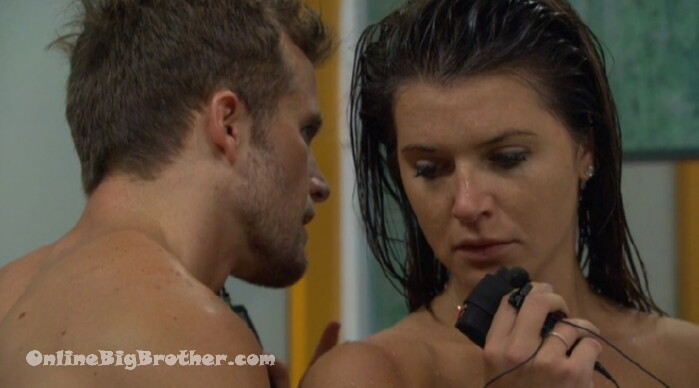 11:12am Winston and Angela
Winston says Sam needs to go into the Diary room and ask them about the specifics of her power.
Angela – the only people she’s told is Tyler and Kaycee so Kaycee should ask.. .
Winston – perfect.. I wish I could say I’m surprised by that
Angela – she doesn’t even know
Winston – she doesn’t even know the specifics
Winston laughs
(hard to hear but I think Winston whispers that Tyler seems convinced that SCottie doesn’t have the power) 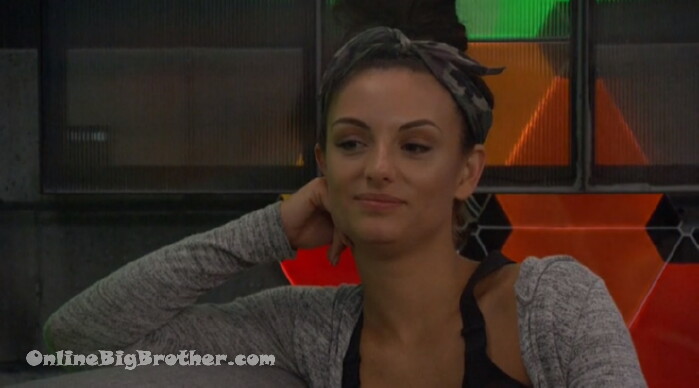 12:10pm Rachel and Kaitlyn
Rachwel – I can’t stop thinking you look like Nicole Ritchie
K – we’re also similiar.. she’s increadable..
R – I want to make sure I do what you want me to
Kaitlyn says the main thing is Swaggy wasn’t picked. She thinks he might have the powe r
Rachel says the word in the house is Scottie has it .
Kaitlyn is going to ask Scottie because everyone is planning on using the veto on him.
Kaitlyn says the only problem is if Fessie wins and since “he does whatever I say” takes Scottie down then she’ll be putting Fessies best friend up on the block.
Kaitlyn – that would be actually f***ing bad..
Kaitlyn wants Rachel to win the competition, says pretty much the only person she doesn’t want to win is Fessie.

Kaitlyn – I have not forgiven Swaggy.. so he has to leave..
Rachel – so everyone will technically use it
Kaitlyn – yes everyone will use it.. there’s no options where this won’t work (unless Fessie wins)
Kailtyn – I just really hope Fessie doesn’t get it because that will be F*****ed up
They both don’t think Fessie will win it.
Kailtyn – You gotta wait till you see everyone’s face you’re going to die .. it’s not going to be good.
Kaitlyn – I would rather be remembered for someone who made F***ING big moves in two weeks that someone who was a floater till the end
Rachel – I feel the same way
Kaitlyn – I’m just not scared of any one
Rachel – if I was in your position I would have done the same thing
Kailtyn – and I know it’s early but it’s like I literally don’t care”

They talk about how Rachel was bummed out getting the “least trending”
Rachel – I love you and I like that we’ve gotten closer.. There’s no order on this side..
Kailtyn – you need to start forming a closer relationship with Fessie.. I kinda see Fessie getting far in this game… he’s a great GUY
Kailtyn – I care about you I want you to go far..
Rachel wants to talk to Fessie more.
Kailtyn – it’s going to work out and it’ll be so stupid 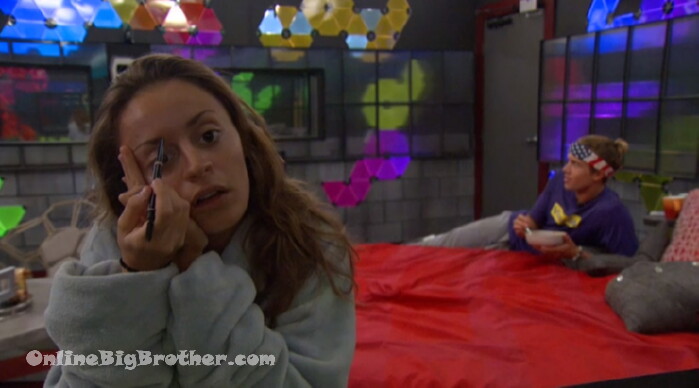 Kaitlyn – any which way this goes..
K – the only thing I hope don’t happen is Fessie wins
T – I wouldn’t want yo to do that
Tyler suggest she tells him to lay low this Veto he doesn’t want to win two in a row and look like a super Threat. Kaitlyn agrees says she was thinking the same thing.
Tyler – so Rachel is going to try to win
Kaitlyn – yeah.. she’s great
Kailtyn – I really think Scottie has the power.. I’m going to talk to him
Tyler – I really don;t
K – than who has i t
T – I fee like he would tell me
K – it’s either Scottie or swagging
Kaitlyn says what she is doing she’s comfortable about because she thinks it’s a good game move
T – you have so many people behind you right now

K – think about my life.. think about who I am as a Person.. Actually you don’t even know who I am .. Like.. who I am in this game which is totally differently.. I’m not myself.. at the core these aren’t my values.. this isn’t what I stand for.
kaitlyn – I’m lying to people’s faces .. Like I’m acknowledging that and it’s really f***ed up and it’s sad for me to be doing this..
K – do you think it’s worth it.. like I’m a self help coach.. I coach people to find their authentic truth.
K – Everything I’m doing is a total hypocrisy so.. I’m just curious.. do you think the moves I am making are going to be legendary moves? will people be like this girl played well .. or will I be like I did all of that for nothing and poeple think I am a A$$
T – NO.. 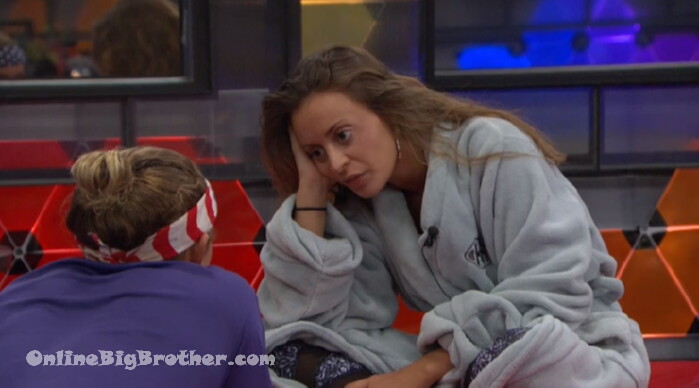 Kaitlyn – what if America loves Swaggy?
T – they don’t love swaggy
k – you don’t know
T – even if they do love swaggy they love you to and they love people that play the game well (I love crazy)
K – I feels right intuitively it feels right .. none of this is who I am or what I stand for
Kaitlyn is worried the other side will come after her for taking Swagzzzz out.
T – NO
K – you’re my best friend
T – you’re my Best friend
K – and Fessie knows.. he said I thought you and I were best firends.. (Kaitlyn is all sorts of awesome crazy.. I think i’m in love.. )
K – I don’t trust Fessie as much as I trust you
T – Fessie wants me outta here
K – I don’t think so

Kaitlyn – I’m not really scared of anyone
T – that’s the best part.. that’s how people win.. 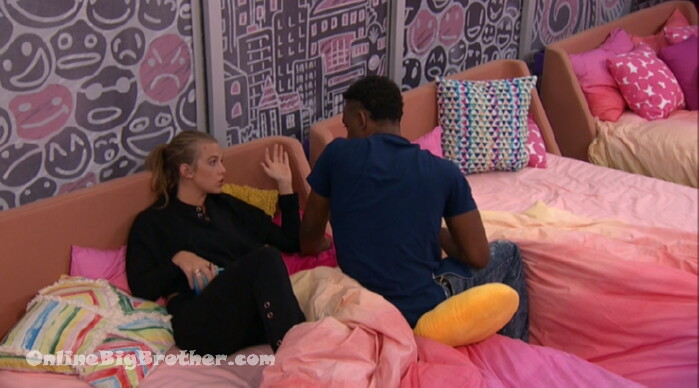 1:00pm Swagz and Haleigh
Haleigh says they need to Kailtyn
Swagx – f*** her
H – I know
Haleigh says if she’s putting up Angela and Rachel
Haleigh – I might do Brett and if I have to replace with rachel.

H – We need to pay attention to BONDS because the bonds can’t form at the end
Haleigh about Kaitlyn – She looks Stupid (no she’s crazzing her way to greatness)
Haleigh wants Winston gone this week.
H – I don’t want Scottie to go home but I also don’t want Kaitlyn to get anymore blood on her hands
Haleigh thinks last week someone flipped.
S – no power got used someone flipped
H – I just don’t want anymore drama in my group it’s breaking us..
H – I don’t think anyone will flip this week.. Tyler is a wildcard though.. I don’t know how I feel about Tyler
S – I think Scottie’s staying 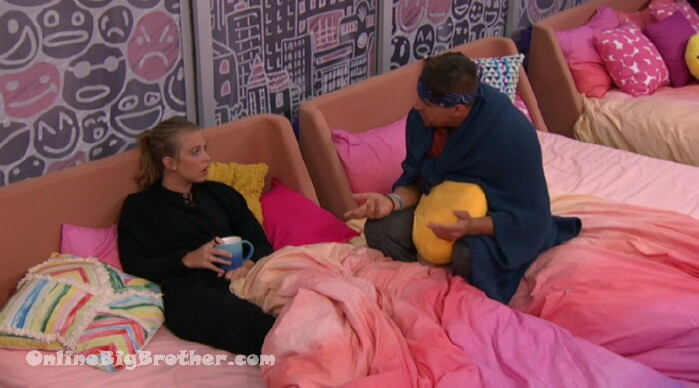 1:06pm Feysal and Haleigh
F – what do you think is best for my game.. win it or not win it
H – if yo think Winston is going to win then win it. if you don’t think Winston is going to do it don’t win it there’s no reason for you to win another comp.
F – If I do win it means I’ve won 2 vetos in a row..
Fes thinks people won’t want to put him up if he keeps winning the Power of Veto.
Haleigh is convinced Fes needs to only win the Veto if Winston is close. otherwise don’t “we have the numbers to keep Scottie”
Fes – I don’t want to throw anything this summer (this guy is awesome.. )
H – don’t throw it do what you have to do.. i’m just telling yo don’t be a bigger threat.. if you are going to do that better start working on your social game with the other side.
F – I’m loyal to y’all .. the last thing I want to do is try and get good with them
Fes goes on to say his plan was to pick the people he was going to be loyal to and fight in every competition.
H – if you win this next competition you are a bigger target than Swaggy..
F – even if I’m not in a showmance
H – Even if yo’re not in a showmance.
F – I’m not playing this game in defense..
H – you have to play this game in defense.. this is a game of chess.
H – I know if Tyler wins he won’t use it.. Rachel said she won’t use it.. Kaitlyns not going to use it
H – the only people that would use it is Winston, Scottie and you
F – I told Scottie I would use it
H – then do that.. you need to focus on your social game and you need to really try

Rockstar joins them. THey talk about FESSIEs two options.. Throw the veto or try and win it..

Meanwhile, in the HOH room, Hayleigh, Bayleigh & Rockstar have moved in, taking it over, obsessively watching the TVs. Those three are quickly becoming my least favorite houseguests.

Does Tyler have the power?

I suspect there are several of us that feel the same way about this crazy one. She’s really trying to play the game. Get out the self proclaimed Puppet Master, smart move this early in the game. Unlike the Asian lady, don’t remember her name who kept saying that it wasn’t the right time, or words to that effect, More power to our crazy Kaitlyn.

Angela for the win!

Her name was Helen. She kept saying it was too early.

I like Faysal’s attitude although the part about not wanting to get in good with the other side is stupid. You have to have a bit of a social game. This isn’t survival where you can win immunity week after week. At least until you get to the part where everyone plays in the veto.