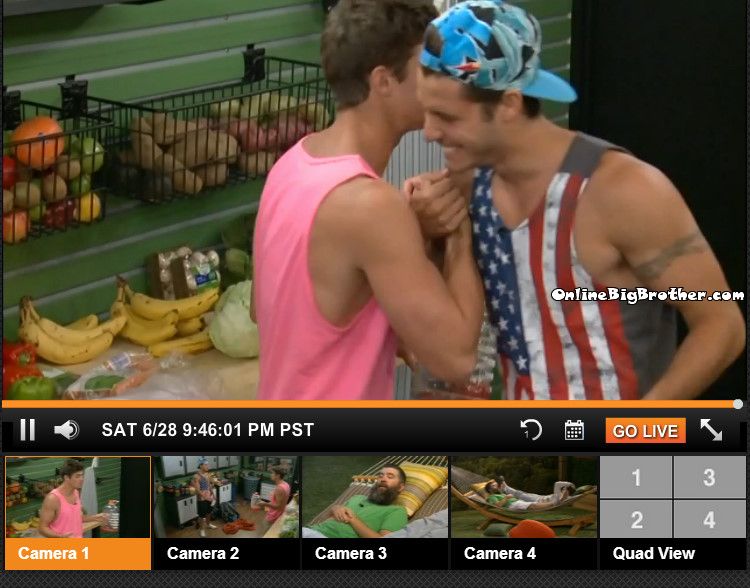 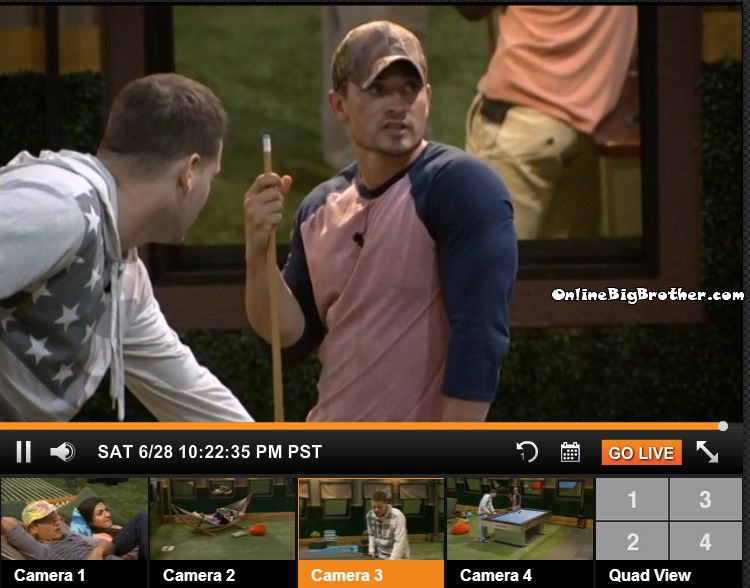 10:20pm Pool table Derrick and Caleb
Derrick is telling Caleb the consequences of Joey calling out the house vote. Derrick stresses if they (Joey etc) get enough people to tell him Devin and they know the numbers and Caleb puts Joey up instead of Devin.

Derrick – “Someone is going to place you on blast or try to f** with our game although i’m not you your game f** up f** my game up” game I Can’t have that happen i’m just concerned .. thats bad for business”
Derrick says he doesn’t want to see Caleb get set up. Caleb says they have the numbers they even have HAyden and Donny. Caleb mentions the pack he made with Hayden day one.
Caleb explains that during the HOH he whispered to hayden “I got you anytime until the end.. that was a pack we made we stay close and we stay far.. me and hayden are good”
Derrick says if a lot of people start saying Devin to him he knows he’s getting setup. 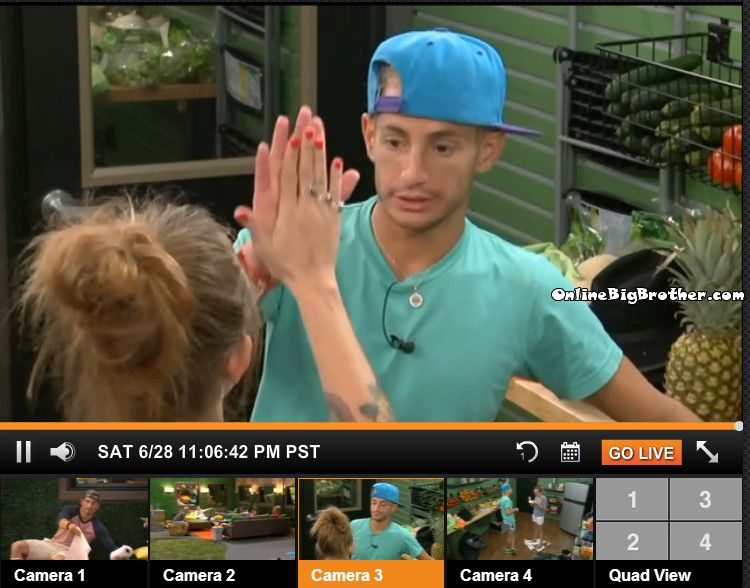 11:04pm Storage room Christine and Frankie
Laughing at POW POW’s spelling performance in the POV challenge. Christine is worried about her place in the bomb squad
Frankie assure her the bomb squad is 5 vs 3. “Amber is completely gone to Caleb’s side”
Christine – “that make me feel so good”
Frankie – “everyone is on board with 5 and three”
(Bomb squad 5 vs 3 Frankie, Christine, Zach, Derrick and Cody VS. Amber, Devin and Cale. sounds like they want to start taking their alliance out week 4) 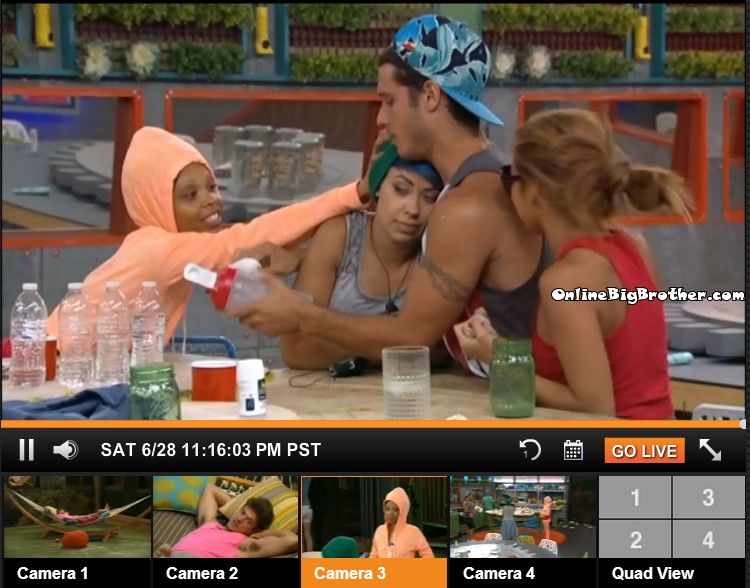 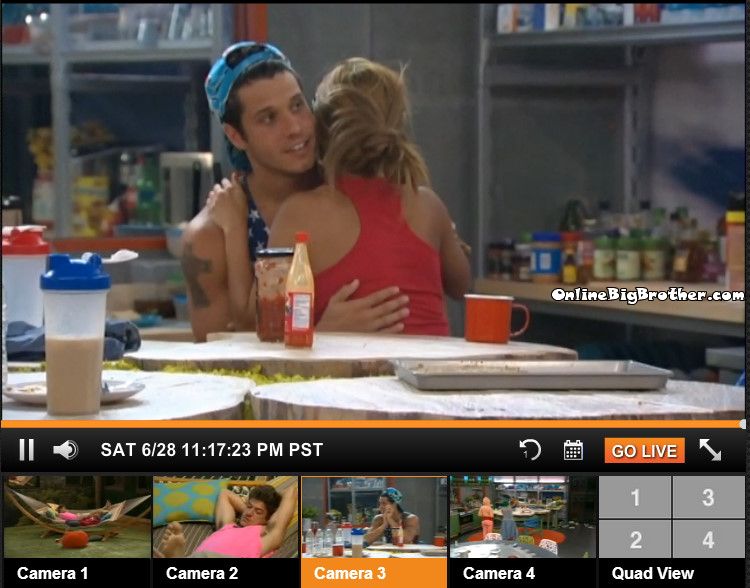 POW POW thinks Cody smells good grabs a sniff every chance she can get. Cody doesn’t understand why says he smells like deodorant. 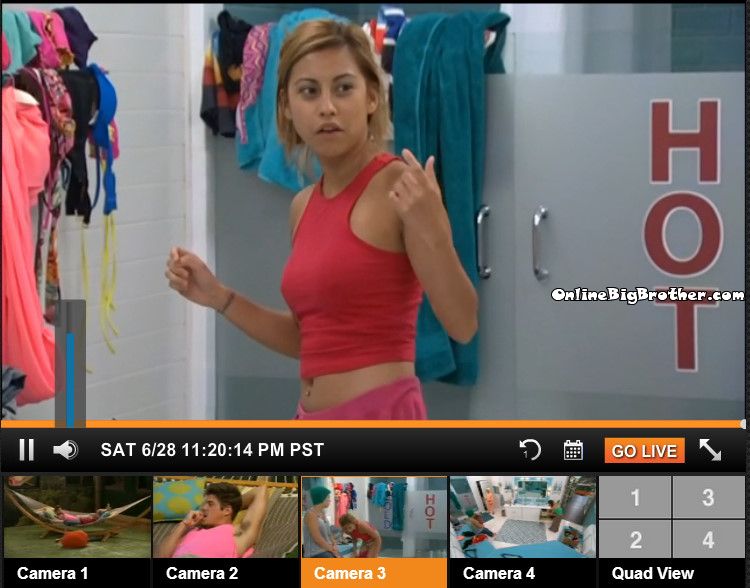 11:20pm Bathroom POW POW changing
She says there no live feeds in the bathroom. They tell her she’s wrong. (Complete pictures can be seen here) 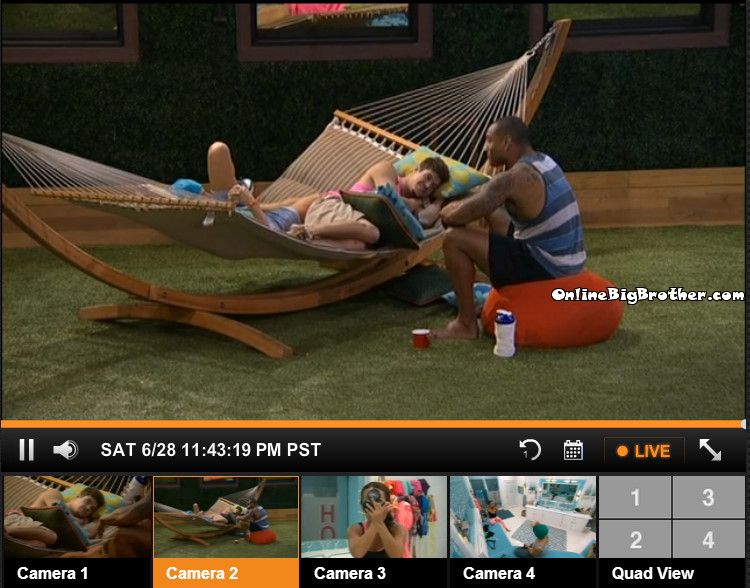 Devin – “I’m coming balls to the walls this next HOH” Frankie says after next week the only person they have to worry about winning is Brittany.
Devin says he has nothing left to say to Brittany he was cheering her on during battle of the block.
Zach – “she showed her cards too early”
Devin – “I was cheering her on like crazy.. .like crazy.
Frankie – “She’s the next on our hit list”
Zach – “thats what we do”
Devin saying he’s a fan of Big brother but he’s also a student. They have the largest alliance ever to be in the game. He wants to win the money but he also wants to do something that touches the games history.
Devin – “We have the potential to leave a mark in this game.. to leave our mark on this game forever like one of the greats was my goal and my intention… the way we came together was smooth.. I wants us to come down in history as the best 8 players on Big Brother History.

Off to an interesting start. I’m rooting for 21 jumpstreet. He’s got these guys fooled and they all trust him.

I’m liking Derrick the best too. I think he’s playing a great social game so far. I’d like to see Devin go next week.

After watching the feeds and Brit and Devin talking about why they differ, I think Brit comes off as a complete idiot. She is pissed because Devin “approached her wrong” but she has no detail about how he was an ass about it. Devin completely explains himself and yet Brittany can’t forgive him or even explain why that event was so devastating to her in regard to Devin.

I love looking at Brit but she is truly a basket case.

Get out
Reply to  BigJacket

Devin: BRITTANY WHAT IS WRONG WITH YOU WHY DO YOU HATE ME I DO EVERYTHING RIGHT?!!?
*Britt tries to say three words*
Devin: SEE–NO LOOK I DONT WANT TO HEAR IT!!! YOU DO THIS TO ME ON MY DAUGHTERS BIRTHDAY?!?!?! HOW DARE YOUUU!?!?

LaDolceVita
Reply to  Get out

Stupid Devin, just because it’s her daughter’s birthday the HG’s need to stop playing and treat him somewhat special?!?!? New rules to the game?? So immature and stupid!

It’s ridiculous that they think Joey trying to start something means she has bad game play. This is what good players do. They recognize when they’re in trouble and start throwing the spotlight on another player. Players with no game just sit around oblivious to the fact that they need to get to work. She was going to be gone anyway if she didn’t do something.

Didn’t like Zach when he entered but he’s by far my favorite now :)

Hello Simon and Dawg…question…Why so much spacing in the posts in the new format? It is driving me crazy. I hate having one post be on two pages…scroll, scroll, click, click. It has decreased my enjoyment of the site. Now I know others who love you will come to your defence and tell me to go elsewhere for my spoilers, but I think we should be free to express our differing opinions. I have been one of your loyal followers for years too.

Simon
Reply to  No offence intended...

Thanks for the feedback. We’ll try and reduce spacing in posts.

Speaking one’s mind?? What a novel idea!! At least S/D can take it as it’s intended, unlike 15 BB HG that I know of!!

Oh he “made his mark” alright. He actually told other people about his “secret alliance” of guys. Its definitely marked as one of the stupidest things in BB to do. Congrats, you made history and not in a good way ding dong.
*bangs head* (Hopefully bye bye Devin, wishful thinking I know)

I do like Cody and Zach ( Zach believe it or not lols). Frankie is growing on me. I think its funny how Joey is being blamed for “starting the girls alliance” when it was actually pow pow ,who also had the named picked out and everything haha. I guess she didn’t remember how ” Quatro” ended real quick the first time.