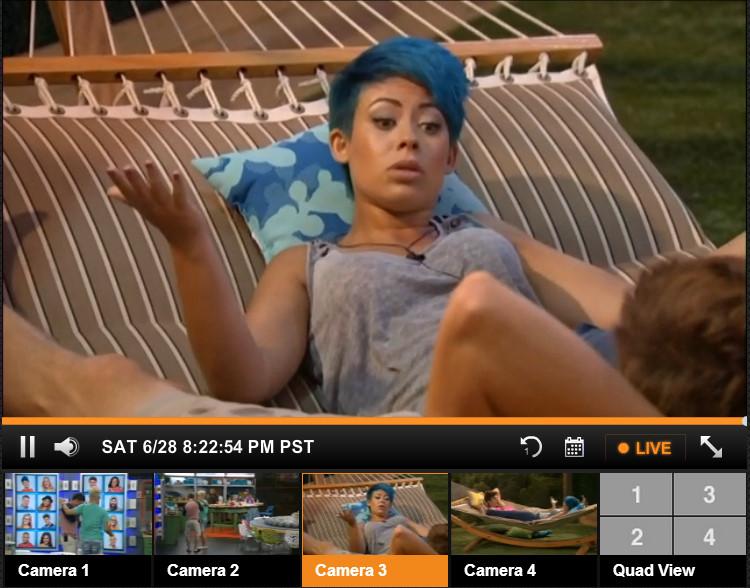 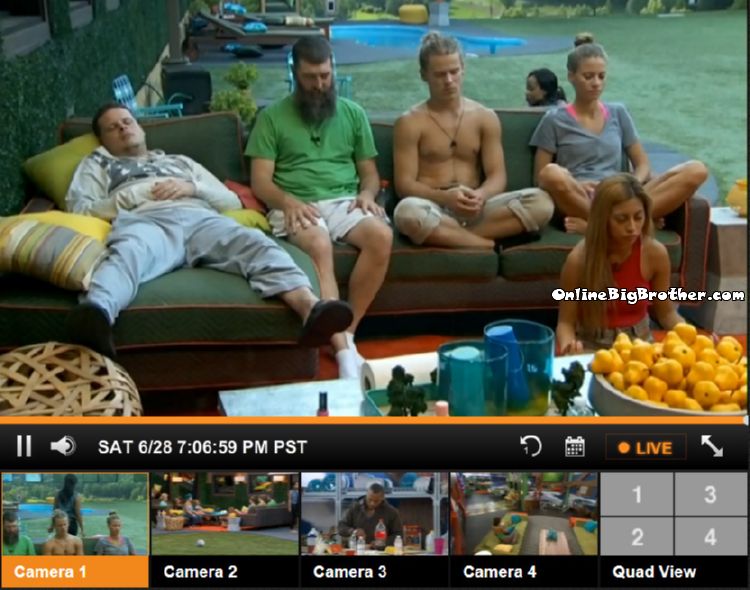 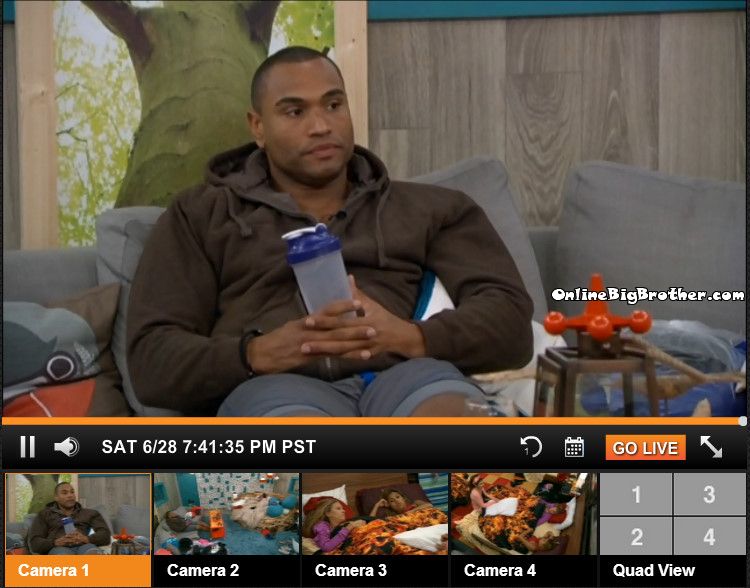 Devin brings up his conversation with Joey right before she decided to make the announcement.
They both say the like Joey and she’s a lot of fun to be in the house. Caleb points out she has no idea how to play the game. Dvein thought Joey was going to be cool and collected but it’s not the case.
Devin – “She came she saw she didn’t conquer
Caleb – “Oh well one down”
Devin – “and 7 to go”
Devin – “Lets do what the brigade did but on a bigger more grandiose scale l ‘
Caleb – “they had 4 people.. that ain’t nothing.. they made it to the end? “
Devin – “Oh ya There was a big dude that was lifting all the plates.. Hayden won that one they had a lot of competitors dude a lot of competitors..”
Devin says production might throw a twist in the game to end their alliance but he’s still going to fight for the group.
“I know you came into here for personal reason but at the end of the day I came here to give it everything I have.. if you don’t like how I played this game i’m sorry i’m playing for a 2 year old little girl that stands 2 feet tall.”
Caleb – “at the end of the day that is how you have to look at it we have a good strong 8 we definitely can make it” 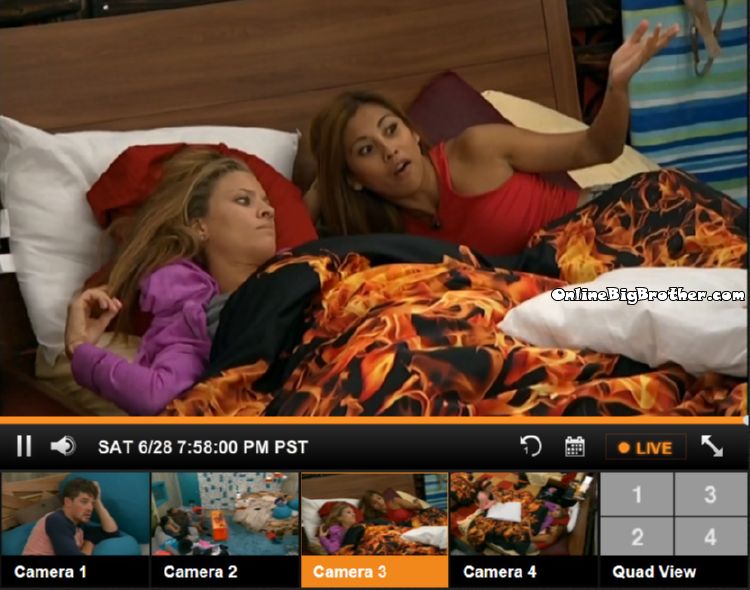 POW POW thinks Joey is playing too hard. She is worried she’ll expose the crazy 8’s, “that won’t be good for any of us, you me and Devin.. Nicole, Devin will be pissed.. what do you think”
Amber – I don’t  know at this point..  I’m just thinking where did that come from” (the announcement)
Victoria joins them. They start talking about Joey’s announcement and how at this stage in the game the HOH is looking for anything to use as an excuse to nominate someone. They wonder if Devin or Caleb had told her something because she was talking to them right before she did the announcement
Victoria saying that she likes Joey a lot but in terms of games she doesn’t know about her. They start mentioning some of the things Joey is doing to damage their games and her own. Joey keeps mentioning the “Girls alliance” and how some girls were down with it. This makes the guys not trust the girls.
They agree Donny is funny.
POW POW – “We have to stay low just stay low”
Victoria – “I don’t think they see me as a threat”
POW POW – “They see me as a threat cause I win all the competitions”
HA ha 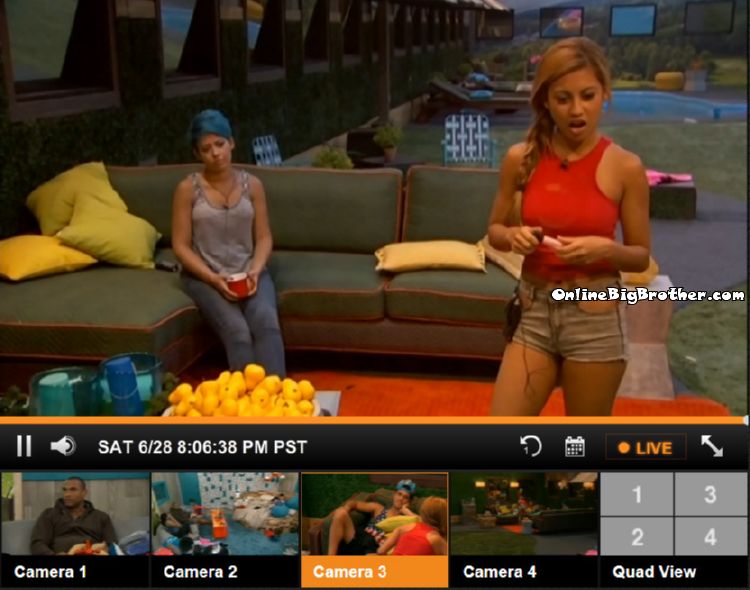 house guests in and out. Frankie asks about POWPOW’s shorts. she explains her friend is a stylist she cut the pockets out and as payment POWPOW teaches her DJing.
This starts a DJing conversation. Cody says he MC’s event and DJ’s. POWPOW says the hardest music to cut is reggae.
POW POW asks Cody how much he would charge to MC an event.
Cody say 700
POWPOW is surprised by that “no way For a fashion event” offers  300 400
Cody says sure. Brittany joins them and Cody leaves.
POW POW- “Cody can i lick your arms.. just his arm”
Brittany – “This brush is broken can I use your abs”
POW POW- “can i grate this cheese on your abs”

She’s defending why she made the announcement.
Zach – “Thats smart of you.. I don’t want to see you go home”
Joey doesn’t want to see anyone going home. She explains right now in the game it’s a living situation. If Caleb really does take a vote around the house it’s not going to be her it’s going to be another person. Joey thinks they should get rid of the person making their time in the house uncomfortable.
Zach wants to know who it is
Zach – ”Tell me the F*** name.. you want to F** stay.. I want you to stay you make me laugh 100 times a day”
Joey – “I want to see Devin go home”
Zach – “So do I, I would much rather POW go home over you”
Joey says Devin and Caleb are working together, “Devin’s sleeping up there tonight”
Derrick joins them.
Joey says Devin is a physical threat and he’s difficult to live with. She points out he will destroy everyone in physical competitions. Zach agrees says
Zach – She can’t stand she can’t swing she can’t spell
Joey is going to go tell Devin she wants him nominated . Derrick and Zach think she should have a house meeting but think it through first.
Joey leaves..
Derrick – “I don’t think in a million years Caleb will put him on the block”
Zach says if everyone tells Caleb to put Devin up and he doesn’t put up devin everyone will know they are in an alliance. Derrick says Devin told him if he goes up he’s blowing the bombsquad up.
Zach – “Joey is not a threat”
Derrick cannot see Devin going up.
Zach mentions Devin adding two new members into their alliance without talking to anybody. They wonder if Caleb will see Devin as a risk maybe they could use that to convince him. Zach doesn’t know if they have the balls to tell him to pui Devin up. Derrick -”Caleb’s not going back on his word
Derick says Devin going home will make him them and cody 10 times stronger.
Zach – “The bomb squad is going to be exposed sooner than later bro”
Joey comes back. Zach says her plan to get rid of Devin is borderline genius. Joey goes over her  conversation with Devine.
Joey – “I’m going to have diarrhea for my entire time in this house..Stress and Slop”

Is it possible to play this hard this quickly ??!?!?!??
I am sooooo pissed about the 2 HoH thing because this stupid 8 person alliance can actually make this game incredibly boring if they truly believe in their 8 person alliance.

In a normal season Hayden, Nicole, Brittany are chilling but who knows?

(It’s the first week Josh, it will get better)

Maybe this whole week is a fantasy and next week we start the real season of all stars becaus if Devin lasts more than 2 weeks I may go crazy.

What I am not getting is that if Joey exposed the girls alliance because she did not know the game. How is she playing so hard to get ride of Devin.

I mean, Im glad she is doing this, because I do want Devin gone.

But I am not getting where is this all coming from.

Joey is playing on instinct. And if she can survives this she’ll be a great player.

Team Joey!!! Whether she stays or not she’s shaking up the house and Devin and Caleb specifically. Now the cracks in the Bomb Squad are already showing.

At first I liked Amber and felt for her with Caleb stalking her. Now that she and Christine want the Bomb Squad to take out all the other girls so they’ll be the only ones left I hope she goes soon. Never felt one way or the other about Christine but as of now she can go as well.

Oh I did not know these 2 wants all the other girls out.. How stupid. Why the girls always has to be so stupid?.. the only way they can win is getting ride of the guys..
I hope Britanny wins next week HOH and get ride of Devin or Frankie.

I’m ready for Brittany to grab this game by the balls. If any of the girls are going to nom Caleb/Devin it’s her.

I agree. But I would prefer she goes after Frankie first because he is just like Andy last season.

I hope Devin goes this week, then Frankie, Donny and ZAck

Got to get rid of Caleb and Devin as soon as they can.

The smart move would be for the next 2 HOHs to each put up one of Caleb/Devin duo. That way one remains on the block and they are not out there alone as a sole target.

I hate that alot of these ppl have no idea about big brother there agents got them on. But they act like they are super fans ie Frankie caleb cody pow pow few others I root for donny and Christine and derrick ppl who obviously watch the show!!

Joey’s plan is working. Caleb is losing it. He’s telling Derrick and Zach that he’s going to call a meeting and tell everyone he’s changed his mind and Joey’s going up. And he says he’ll tell Brittany that he’s the only who can carry her so if she doesn’t like it she’s next to go.

I hope he does it. That should make for an interesting Sunday.

After watching BBAD Caleb , Zach and Cody are so cocky
I hate cocky I hope these guys go soon.

I bet that America’s challenge told Joey to say that to Devin. So it looks like if you get America’s player, you get 5 grand, but it might make you do something that can F up your game. So seriously, people should vote for someone they hate for next America’s player/alliance.