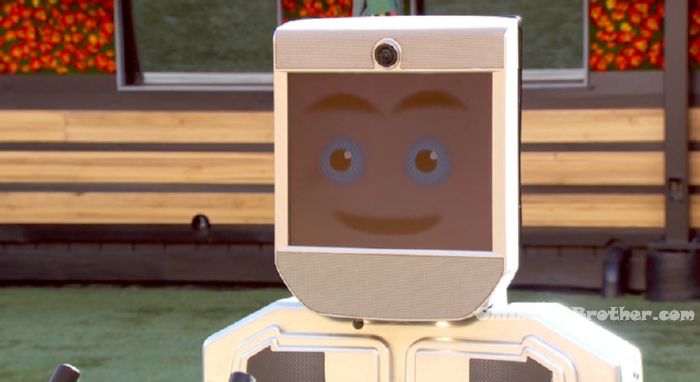 Meanwhile over on the backyard couches – Bayleigh, Swaggy C, Steven, Sam (robot) and Scottie. They start talking about scary movies. Sam – excuse me from this conversation. I do not do scary movies. Sam heads over to Rachel on the bicycle. Sam – I am going to stare at you awkwardly while you workout. Steve and them were just talking about horror movies. You guys remember that one BB20 where they send the robot in and she kills everybody?

5:30pm – 5:55pm Hammock – Angela and Winston. Winston – every time Steve tells a story he will literally look for the camera. Angela – I haven’t noticed that and I am glad I haven’t noticed. Winston – he thinks it his own show. People are going to get more and more snappy. That thing that happened this morning, in 6 weeks it will be a full on cat fight. The more we can float back into the shadows .. is key. Angela – I think I’m the most hated. Winston – you’re not the most hated. Angela – most targeted. Winston – people are jealous of you. You’ve got to have your mental check-ins.. Like me and Brett have our five minutes where we literally just complain. 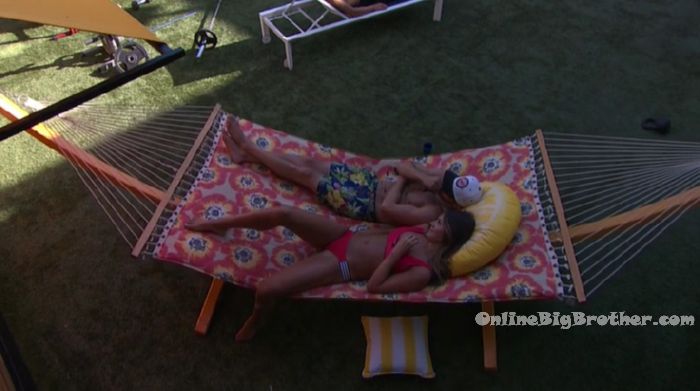 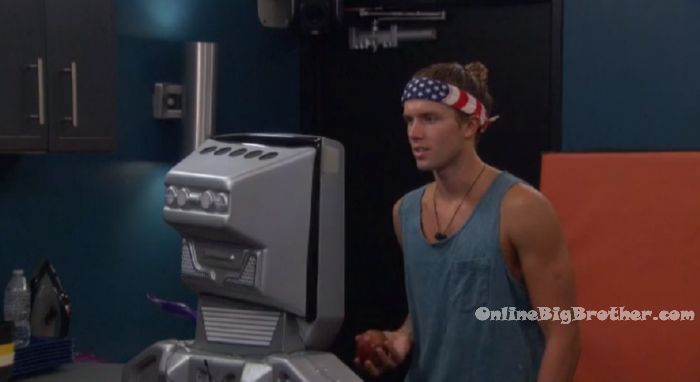 7:45pm Bathroom – Kaycee, Kaitlyn & Angela. Angela – JC came to me today and said we have the numbers. I think the reason why he doesn’t want to tell me is because he has the power. I think its like two votes. Kaitlyn – that’s something you should tell us. Rachel – And I think he is going to, just not 4 days ahead so we don’t run around telling each other. He thinks the veto is going to be used and its not. He is freaking out about the veto and I am trying to discretely tell him he’s (Faysal) not going to use it.

8pm Sam – is there anything else I need to know? Kaycee – just apologize to Kaitlyn. Angela and Kaycee tell Sam that “they” (the others) want to keep Steve. Sam – but why, they make it seem like they’re so nice to me. Kaycee – they have him (Steve) guaranteed on his side. Sam – can I trust Tyler? Kaycee – yeah. Sam – okay. He’s not team Swag? Kaycee – yeah team Swag wants to keep Steve here. I guess Steve is committed to them. Kaycee – we want you to stay .. we really really do. Sam – who is we. Kaycee – we can’t say. There’s a good chunk that wants you to stay and there’s a good chunk that wants Steve to stay. 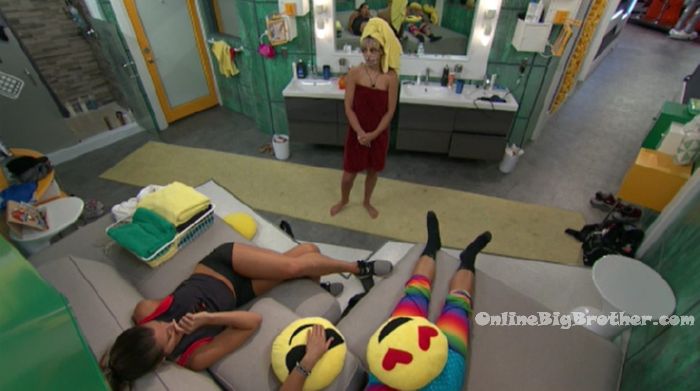 Poor Sambot can’t get any sun….she fizzles out.

Just an aside, thanks Simon/Dawg for summarizing the “alliances” and sub alliances….Cliff notes are always appreciated!

Ooooh! It’s time for the veto ceremony. I want it now! I may not have much time left. My heart is feeling weak.

Steve is annoying af when he is laying it on thick making sure he securing votes. He told Fess(Ok so his nickname in real life is Fessy but I’m going with Fess. I’ve tried Fez cuz it’s shorter but it’s also not accurate) ok so anyhow Steve told Fess he reminds him of his oldest son and it came off so fake haha. Steve annoys me like that. The fake obvious crap to make sure he safe. You are gone dude. Sam is staying.

Are these the worst showmances in history? Bayleigh and Swag. Just bad. And Haleigh and Fess. Even worse.

Winston legit can’t shut up for 4 consecutive seconds. If anyone here likes him you are dead to me.

Haven’t seen the feeds, I liked Winston from the show, but your comment just answered a lot of “why” questions for me….. Lol.

Is anyone else getting a Donny (Season 16) vibe/feeling from Sam?

No not at all its seems like Sam is a recruit n doesn’t truly no about the game she has power but still crys the blues which she has every right to cuz the robot shitty punishment ever KC should of had the same one in my opinion. But the game is the game. Sam is no Donny love her voted for her for the season first app. To get the power however I’m regretting how bad I felt for her in the 1st show 2/nd.

Does anyone else think the whole robot punishment is completely lame? The network keeps trying to add greater “twists” but it seems like they make the show worse and allows the network to twist the game to their agenda.