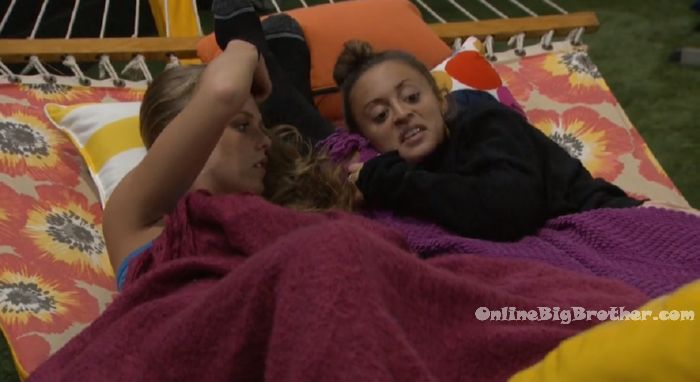 8:15pm Steven and Scottie talking on the backyard couches. Steven – outside looking what is my best play? Scottie – usually for the older players it’s social play. Steven – I think I am following that role pretty good. Scottie – the only negative thing is that the older players usually go pretty far but a lot of them are pretty useless so they get kept around. You’ll do better than them just because you’ve proven you’re strong. Steven – these people think I a strong player? Scottie – physically yes. Bayleigh said that people think I am physically strong. My best play in my opinion is… I know I am going to get compared to the Steve’s and Ians and they’re viewed as sneaky players so I want to be honest. That’s my best play. I’m going, to be honest. Scottie – unless it’s perceived that we’re in danger then we really go at it. If this going the way we want it to, one of them will make a move against the other one. So then we just sit back and watch the fireworks. Steven – we just let the factions kill each other off? Scottie – yeah. But definitely be close with the factions. Scottie – apparently Sam told Tyler that she trusts me .. which blows my mind because I told Sam point blank that I am voting to keep you. Steven – that’s probably why she trusts you because you told her. 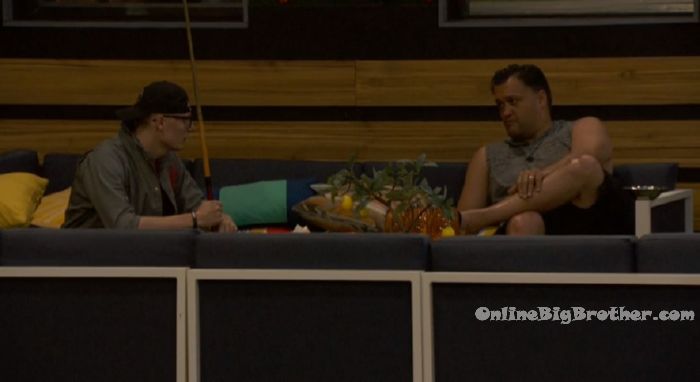 9pm Hammock. Faysal and Haleigh. Haleigh – we’ve just got to keep the power. Faysal – y’all need to pull out some sh*t too. Haleigh – we haven’t had the chance to compete. Faysal – I just hope perfect scenario for the first few weeks where we just maul the HOH’s. Its possible. Its possible. Kaitlyn joins them. Kaitlyn – I went inside to meditate ..and didn’t get to do that. I was just in the geometry room for like an hour. I am legit pissed… That she is going home. I am pissed about it! It is f**king unnecessary. Faysal – Tyler is not budging at all. Kaitlyn – that kid is a moron, idiot! And I think he is a pu$$y! She was like I will f**king work with you guys. Faysal – Does he know its not on us its on Tyler?! I could use the veto on her. He hasn’t tried to talk to her? Kaitlyn – I told her we have no intentions of wanting her to go home. Steven joins them and the conversation ends. Steve – Can’t we just fast forward to Thursday, please!? Faysal – who would you put on the block if you or Scottie were to win? Steven – showgirl (Rachel) and Angela. Let them fight it out. Faysal – and then if Angela has the power, put up who? Steven – somebody that maybe has to go.. Kaitlyn – maybe has to go!? He is the biggest schemer of 2018! (Winston) I want that b***h gone! Steven – you know what I’m saying. Kaitlyn – my name needs to stay out of that motherf**kers mouth! My name is always in his F**king mouth! Steven – he is the deal, if Scottie or I win. I’ll put up the two rockstars and let them fight it out. Hopefully, we can get the pick and win the power of veto. If we don’t and she somehow beasts it .. then Winston goes up. The end!

9:15pm Bedroom – Swaggy c, Kaitlyn, Bayleigh. Kaitlyn – I feel bad about what’s going on. I just think this is the dumbest f**king week in big brother history. Bayleigh – for her (Sam) or for all of us? Kaitlyn – no this pu$$y a$$ sh*t that’s going on. And these small a$$ moves. I would rather leave big brother on the second f**king week by making big moves than doing nothing. Tyler is being a cop-out .. there are bigger f**king fish to fry. I get it and I get what he is doing. Its great for his game but like both options would be great for his game. Its like he doesn’t see that he has a whole f**king squad. Bayleigh – wow, I really need to shave my legs. Kaitlyn – but I mean listen, its not my HOH. Bayleigh – I don’t think he thinks he can compete on the level of Swag and Faysal. He doesn’t think that being on our side would be a good move. Scottie joins them. They start talking about cookie dough and other foods. 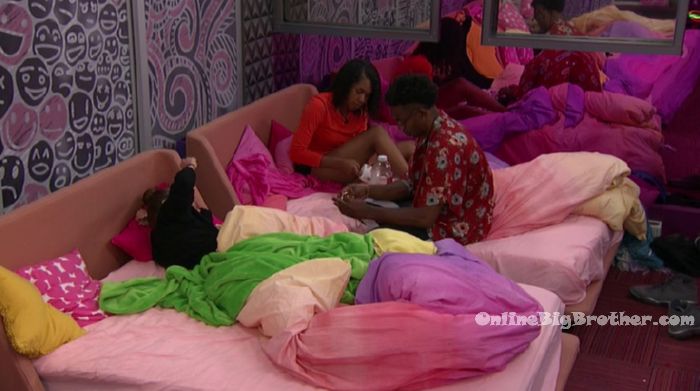 9:30pm Hammock. Faysal and Haleigh. Haleigh – I can`t be in this house for another 2 months. Faysal – I`m here for you girl. Stay with me tonight? Haleigh – what are you going to tell JC? Faysal – stay with Rockstar. Haleigh – we’ll see. Faysal – I’m with your whole thing.. your master plan. Haleigh – what’s my master plan? Faysal – I’m with whatever you don’t want people to see. I didn’t think I would like you so much. I don’t know why I do. What did you do to me? Haleigh – I didn’t do anything. I just don’t think I’m the only one you like this much. Faysal – Kaitlyn, Kaitlyn is my friend. Haleigh – I didn’t even say her name. Faysal – I know but that’s the only other person I spend time with other than you. Kaitlyn has a boyfriend and I’m not into her. Faysal – I don’t like giving you attention because I know you get it from multiple people. I know its a game so I have to keep that in mind. But I do f**k with you besides the game. Meaning I do like you. It makes me not want to f**k with you because you’re f**king with other dudes. If we were outside this house I would not do this ..meaning like you rubbing other dudes and sh*t. Like I would not .. I would have dubbed you. Haleigh – are the hair massages bothering you? Faysal – I don’t know. I’m not even like a jealous person. Its not like I’m jealous. It makes me not want to f**k with you … but I do want to f**k with you. Haleigh – but I don’t want you to feel like you don’t want to. But if that’s what you want to do is ignore me then do it. I’m just going to be pissed and call you out on it all the time. Faysal – it would be different if we weren’t in this game. Haleigh – it would be a lot different. Faysal – I mean it when I say that you’re the sexiest girl in the house. I mean it! Swear to god! By far! Haleigh – I don’t believe you. Faysal – believe me. I liked you even more when you dressed down. The little stuff you do. Not all girls are like that. Like Angela, yeah she is pretty but when I had one conversation with her.. I was like no way. 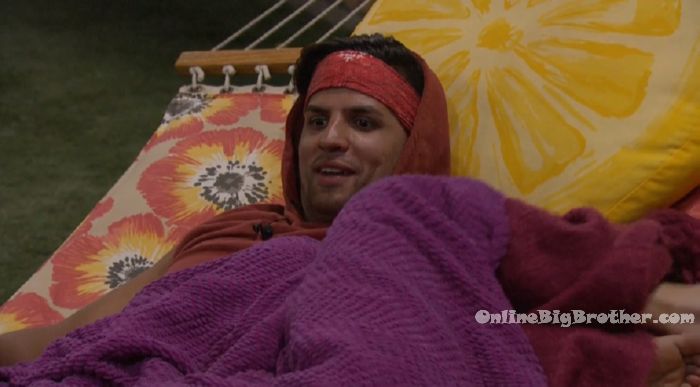 10:05pm HOH bathroom – Brett to Winston – so what were you talking about earlier. Winston – I was in the sun chair and it looked like I was asleep. Rockstar was talking about.. Brett – yeah I heard that part. Where Haleigh said I can’t wait to f**k my ex-boyfriend. And then Rockstar said I can’t wait to f**k my boyfriend. Winston – she (Haleigh) stands up and starts walking… directly to you and starts scratching your back. Faysal got out of the hot tub and got into the real pool and just laid down by himself and floated away ..rejected. Brett – I feel like its bad for my game. Winston – no its not. Its fantastic. The more that Faysal realizes he will be like .. you know what screw her. We got her .. if we want her. Brett – but after the veto comp and after all of that… he (Faysal) is gunning for me. I am his primary target. Winston – Haliegh is I’m not saying playing you.. Brett – she is good. She gets around. The only two I think we could pull are Haleigh and Kaitlyn. Angela – really, she contradicts herself every five minutes. Winston – Kaitlyn is very very into loyalty. Brett – she is literally more into friendship than the game. Winston – that’s it! We take her in and kick her out when we need to. 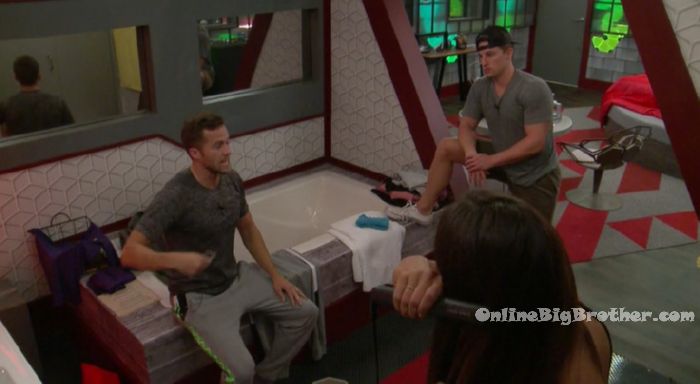 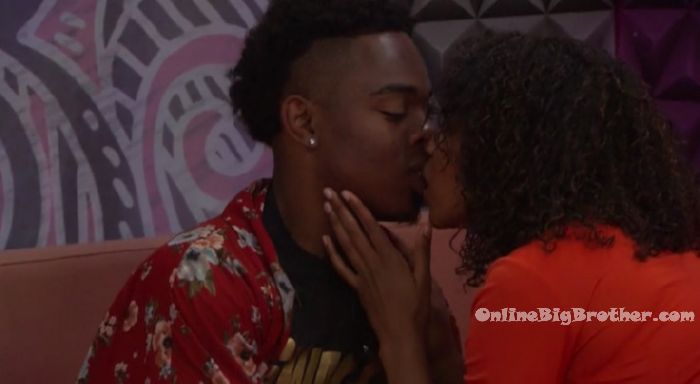 11:20pm – 11:40pm Backyard. Rockstar and Steven. Steven tell Rockstar about his theory that Winston is really a doctor. He said he is in medical sales but when he looked at my knee she started saying all this clinical sh&t. Faysal joins them. 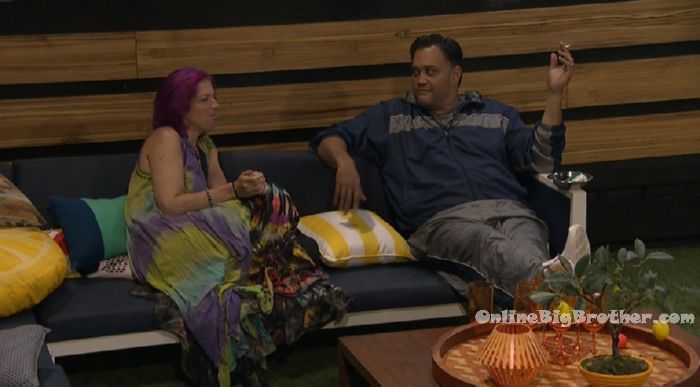 I’m getting Season 15 vibes with some of these ppl….. Swaggy C & Fas remind me of Jeremy……Haleigh= Katelyn ( Jeremy’s boo)…Rockstar & Kaitlyn giving off Aryn vibes….. read that Rockstar was a former stripper? Who would pay to see that?

I want Sam to stay, but on the other hand I don’t want Steve to leave either.
Steve’s been working his butt off trying to stay in the game. I can respect that.

I’m pretty sure Sam is safe and not going anywhere.

I for one won’t miss Steve and his ear wax…..let alone his new found cockiness with Rockstar

I can’t with Faysal and Haleigh’s hammock conversation. Faysal sounds like such a f*ckboy. I actually lost brain cells. And all the “I f*ck with you, I don’t f*ck with you” ‘s.. Can you use normal English please?

Not sure about this cast yet......
Reply to  George

I thought the same thing. He seems very arrogant and as a woman, he’s not attractive AT ALL! If I was in a bar and he started talking to me like that I would actually get up and walk away while he was talking. When will men realize that kind of language is not attractive to women?!

Rhonda
Reply to  Not sure about this cast yet......

Cassi
Reply to  Not sure about this cast yet......

for me, as soon as he started to speak all i could think was you're a teacher? He does not come across as intelligent at all. You know, in movies where people are stoned and portrayed as complete morons – that is the way Faysal comes across to me. I just wish that there would be a double next week (yes, I know it’s too early for that but I can dream. lol) and faysal and scaggy would both be out. I can’t handle much longer with these two. Both are arrogant, obnoxious and just so full of themselves.

So if Sam plays her power after the vote does no one go home then?
Assuming she will need to?

From my take on it, she would say I am staying and the HOH would have to replace her with someone else or the other person just goes. Not really well explained how that will work. I would hope that it doesn’t mean its a dead week and no one leaves.

Personally I feel like Kaitlyn a weaker player, not bad socially, but if she is “pissed” sam is going, why not change it, because I feel like for her personal game Steve won’t help her long-term

Kaitlyn is confusing . First off she is a Life Coach at 24. (Don’t get me started on the irony). Secondly she into yoga and meditation. Correct me if I’m wrong but wouldn’t you think someone who was into those activities, which are suppose to be positive and enlightening, would be more of a positive person? She’s one of the most negative people in the house.

All we need is one racist remark from this cast and then this will be BB15 all over again. I have no dog in this race because these people are boring … but Faz the f**kboy is really getting on my last nerves everytime he talks like what is… I wanna f**k with you but I don’t wanna f**k with you suppost to mean pick one and stick with it my gosh it’s not a hard concept.