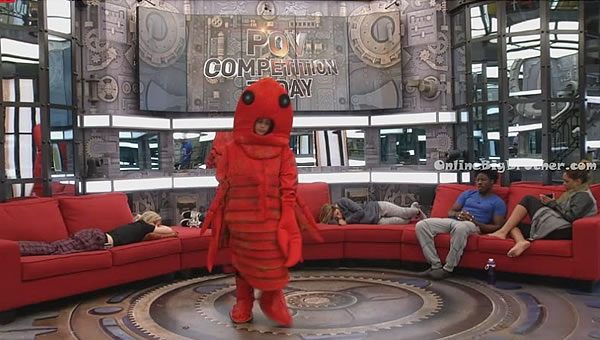 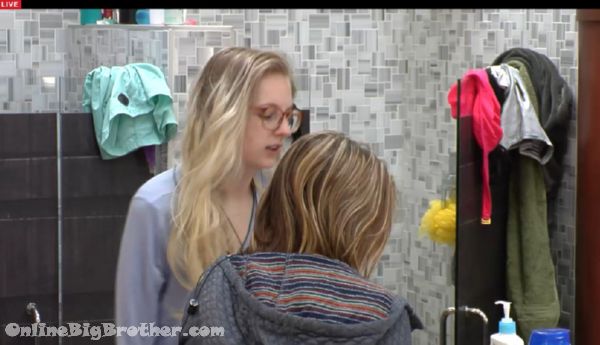 8:45pm bathroom Willow and Sarah saying they are going to have to get in a fight to throw people off. Sarah says Brittnee was insinuating she was up all night making out. Sarah gives Willow a kiss on the forehead. 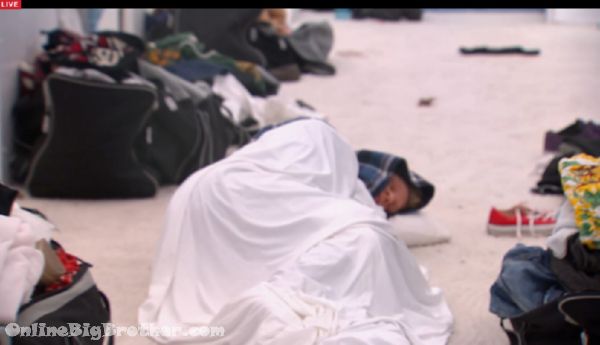 8:49pm Bobby taking advantage of the soft bedroom floor. Big Brother wakes him up with the roaster 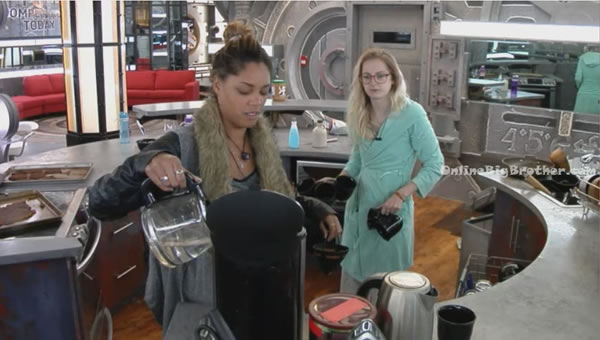 8:50pm Sarah and Brittnee kitchen
Brittnee apologizes if Sarah got offhanded . Sarah says she wasn’t offended she wanted to make it clear so Scott wouldn’t get upset.
Sarah – I wouldn’t do that to you.. were You and Bobby making out last night”
They agree Bobby is a real sweet heart, they feel bad that he annoys them so much sometimes. Sarah mentions how Godfrey needs to start cleaning up his “Sh1t” (AKA dirty dishes)
(You can still hear some major construction going on in the backyard) 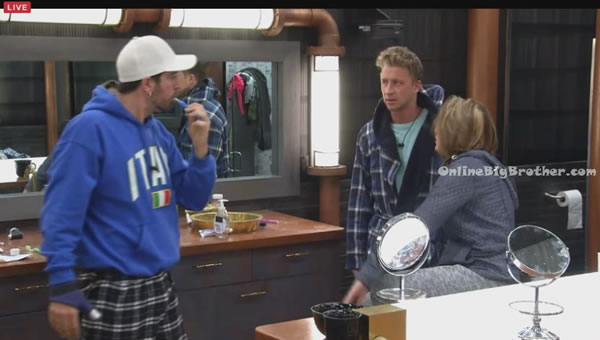 6:51pm Bathroom Bobby, Willow and Bruno
Bobby and Willow tell him if they win the Veto they’ll use it on him. Bobby says he’ll pick Bruno or Willow to play POV if he gets houseguest choice. Willow leaves.
Bobby asks if Sarah will keep him. Bruno say he hope so. 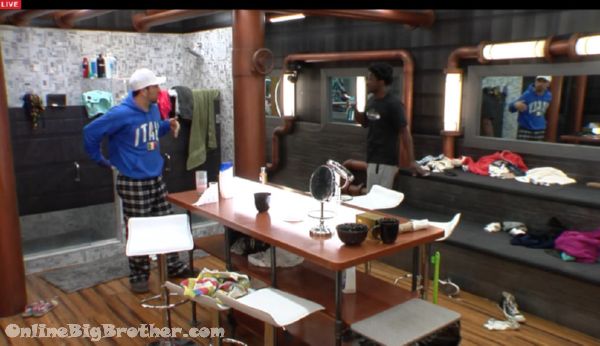 9:24pm Bruno and Godfrey
Bruno asks if God’s talked to Kevin
Godfrey – I’m in a tight spot
Bruno – You’re not even on the block don’t panic
Godfrey – I am not just formally
Bruno says they’ll talk to Kevin before the POV ceremony. 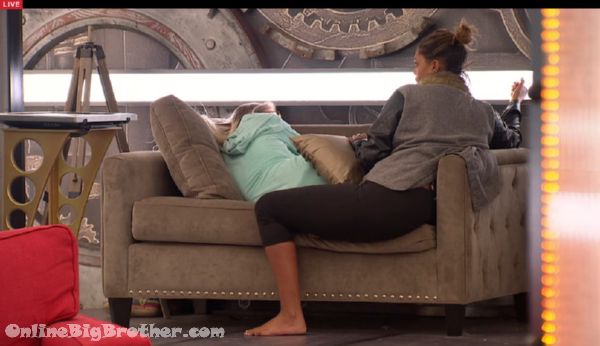 10:37pm Sara and Brittnee
Chatting about he POV being endurance or something very physical, Brittnee says Steady wins the race
Brittnee – I feel bad I didn’t pick God 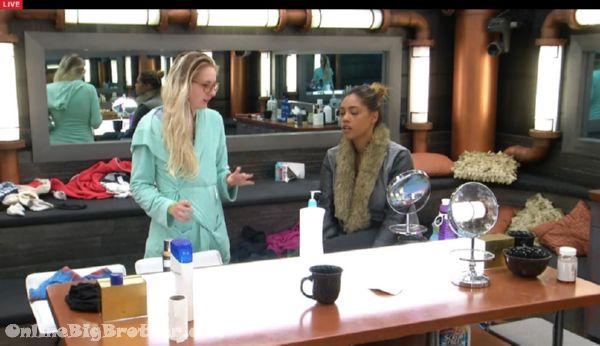 10:52am Bathroom Sarah and Brittnee

Sarah says she doesn’t trust Bruno. Sarah adds that BRuno tells her f***g nothing. She thinks Bruno is going to try and get them to keep Bobby or Brittnee.
Brittnee says she doesn’t trust Willow
Sarah tells her Willow will keep brittnee over the boys
Sarah – I’m telling you B we you need to be careful with the boys not Willow.
Sarah says she needs to start saying she trusts Willow and doesn’t trust Bobby/Bruno
Sarah – Willow is going to have your back over those boy
Brittnee – We’ll see
Sarah – But.. we’re going to win this anyways.. Bruno looks stressed
Brittnee – Good
Sarah – Exactly.. and you know who I don’t trust.. GOD.. he’s already thrown us under the bus I think
Sarah says Godfrey has been distancing himself from them.. “he’s the biggest snake in the grass”

Brittnee – Once I win POV
Sarah – exactly.. God goes up god goes home ..
Sarah – I would love Bobby to go home but the second we send out Bobby.. Bruno will be pissed coming after us and he’s playing both side. 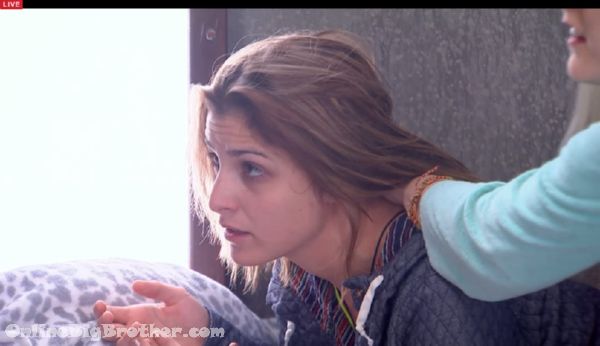 11:01am have nots Sarah and Willow
Sarah telling her that Bruno is someone they cannot trust.
Willow says they have to watch who they talk to now.
Willow brings up her conversation with Bruno/Bobby in the bathroom where she told them Godfrey is the target as far as she’s been told.
Sarah – I’m worried
Sarah says if she wins the veto she’s taking Brittnee down and she’ll tell Bruno to his face that she’s not blowing up her individual game.
Bobby comes in asks if Godfrey is going up. Willow says that is what she’s been told. Bobby is worried Bruno will go up in his place.
Willow says she’s heard from AShleigh and Zach that Bobby/Bruno are super loyal.
Sarah says she trust Bruno 100% but Kevin is all over Bruno all the f***g time

I really hope Godfrey does not get backdoored this week.
I have a feeling Kevin has bigger plans up his sleeves (possibly BD Bruno or take out Bobby).

Cheers for Godvin
Reply to  Mike

I hope Bruno or Bob goes this week, I am so sick of Bruno smug face talking about diapers behind their back, he is so nervous today he knows whats up. Kevin is the only one willing to take a shot at Bruno when everyone else will just let him slide right by like the snake that he is.

Starting to looks like Bruno/Bobby are in serious trouble this week.

I LOVE KEVIN
Reply to  Simon

It is about time.

I am disappointed in sarah and her 180 on Godfrey.

She’s all over the place right now.

Why does Sarah hate God so much? She’s going to mess this game for all of us!

Sarah hates them all. She’s just good at hiding it.
Plus, getting a golden edit by production doesn’t hurt either.

Because Godfrey can’t keep his flipping mouth shut
Between the few great speeches, Godfrey says the dumbest things
without thinking it through. I would never tell Godfrey anything unless
I wanted it to get out. Sarah is just covering her bases. Everyone seems to
forget that Sarahs crew had decided to talk crap about each other to
throw others off, She needs to start winning comps, if that is possible?
she seems to really suck at comps.

Godfrey is containable when the people he thinks he’s aligned with talk to him. He was in the bedroom (sleeping?) when Sarah, Willow and Bruno were talking about ‘as long as the 4 of us stick together’ stuff. They should have been smarter and said 6 of us.

I don’t blame her though, truth is she and bruno do not trust each other. Before coming to an agreement that they’ll go after the diapers they are at each other’s throats. Their group is binded by rationality and not by choice.

I don’t really see where she’s going with her game strategy longterm but she seems to playing the best game by truly being in it for herself. Godfrey is in it for himself too but goes about it kinda wrong in terms of calling people out who actually when comps so of course their gonna come after him. They are both my favs though.

great now Bobby has 4/6 chances of coming off since 3 diapers are playing in veto comp uuuuugghhh!!!!

I really hope Kevin is seriously up to something. Maybe if he wins or Pilly wins, they’d consider taking off Britt to backdoor Bruno. If this happens I hope Sarah/Britt/Willow/God blindside their (diapers) asses by keeping him (Bruno) instead

The last people we want to win right now is Bobby himself and Ash. Ash winning is just as good as Zach winning it and I know nobody wants that!

Bobby is on of the few in the non-diapers that is capable of winning more types of comps though. Depends what you want/consider important within your group to move forward.

Godfreys the one in trouble unfortunately

OMG…Sarah thinks she can’t trust anyone? Who the hell can trust her!! She is so good at turning things around to suit herself, and then whines and cries saying she doesn’t have a side. Who’s fault is it? Everyone knows how she is, and it certainly isn’t a secret. If she picks the Diapers over Bruno/Bobby this girl is an idiot. Those guys will keep her safe longer than she would ever keep them safe. She is already planning to pull Ashleigh in to turn against the guys. I have kept trying to like her and appreciate her game, but right now this girl disgusts me. Keep Brittnee over any of the guys who are on the block? Is she kidding???

Willow will soon start questioning Sarah’s arguments as they are inconsistent and more emotional than even Willow’s. Sarah needs to go hide for awhile, she’s playing a bit to hard the last couple of days.

Oh how I want to see Zack n Kevin evicted during the double!!

Its a triple eviction

No, it’s a triple nomination with two evicted on next week’s HOH. If you count the eviction from Kevin’s HOH that adds up to three evicted within one week.

No its a triple. its been confirmed already on the sideshow

Kevin is defiantly up to something this week. He seems to want to keep around Sarah and God and go after Bobby/Bruno. Maybe he is starting to set himself up to go against Zach.

What part of Zacks determination to keep his chop shop buddies safe
does Kevin not understand … I guess Brunos not the only color blind one
in the house because Kevin doesn’t seem to see the giant red flags Zack is waving.
Kevin needs to realize that Zack will use his CS to get Kevin out … it’s been his mo

I think Kevin is aware of this or suspects it.

we posted this last week when it was first appeared on the BBCANADA site http://www.onlinebigbrother.com/big-brother-canada-3-two-round-hoh-this-week-with-3-house-guests-being-evicted/

Sarah needs to take a seat. I love the girl, but she needs to do some listening and observing before talking. I don’t think she’s the target this week. If Kevin is starting to play his own game then it is of no benefit to take Sarah out. She hasn’t won anything. I don’t think Godfrey is his target either. Godfrey is not after him, so why backdoor him when he’s after Zach? While putting up Zach would be good tv, Kevin would take out the biggest threat in the house and leave himself vulnerable. Bruno and Bobby are the only logical targets left for Kevin. If Zach and Ash can’t run back to the chop shop then that benefits Kevin.

imo sarah is suspicious of godfrey because she believes godfrey has been trying to make a side deal with kevin, and suspects him of taking any info he’s given and ‘accidentally’ let it slip to the other side. she’s suspicious of Bruno because she knows Bruno is more invested in bobby and possibly godfrey and maybe even willow than her. she’s suspicious of bobby because he turned on cindy already, and throws comps openly. in telling britt and willow that the guys aren’t trustworthy, and trashing them, she’s trying to keep the two of them closer to her than the others. is she going overboard? possibly to probably.
i think she wanted to trust the guys, but doesn’t. in all probability it’s partially because of the ‘don’t tell me what to do’ part of her personality. when they converse in a group, the guys are more likely to phrase things as ‘we should’ (authority) than ‘should we'(democracy). in past conversations she’s said to the ssb or to britt and willow ‘there is no leader we all have input.’ she doesn’t trust them to consider her best interests, leaving her to think they want her to do what is best for them.
i really think she doesn’t function well in a large group. that could potentially bite her in the ass.