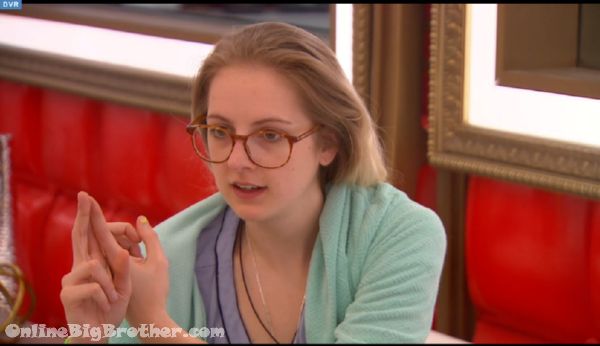 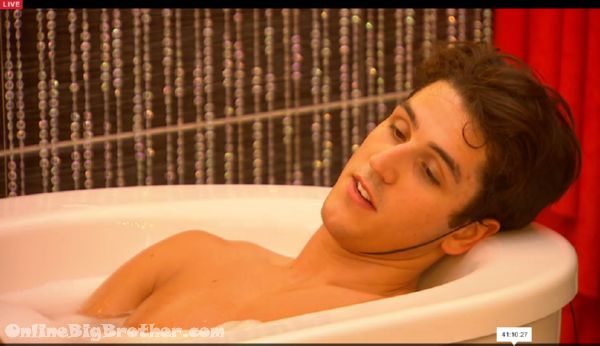 11:16am HOH Zach and Brittnee
Zach says if Brittnee comes down from the block Godfrey goes up and there will be a big debate on who goes home.
Zach says he doesn’t care who comes down Godfrey is going to be the renomination.
Brittnee – I get it why I’m up but I don’t
Kevin come sin
brittnee asks him if he wins POV will he take Bobby down
Kevin – YES then godfrey up probably..
Kevin asks them if Bobby would be OK if he used the veto on Brittnee. Zach and Brittnee are not sure. Kevin thinks they should run it by Bobby, “If you or Sarah win it’s the best case ontario”

11:20am Have nots Bobby and Willow
Willow – I really hope that Kevin doesn’t get bruno.. in with him
Bobby – Oh no way 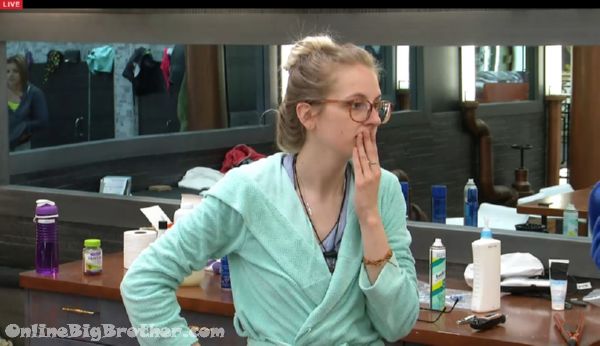 11:27am Bathroom Sarah, Willow and Bruno
Sarah working on the get Zach nominated angle. She says it has to be Bruno to go to Kevin. Bruno says that’s a bit risky right now, “Big Risk.. could be a big reward”
Sarah says she can go to Kevin one on one and ask him what his ideal situation is.
Willow says if Kevin (AKA Dennis the menace) wins Big Brother she’s done watching the show. 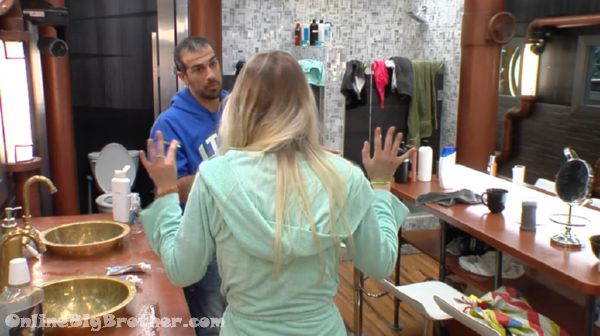 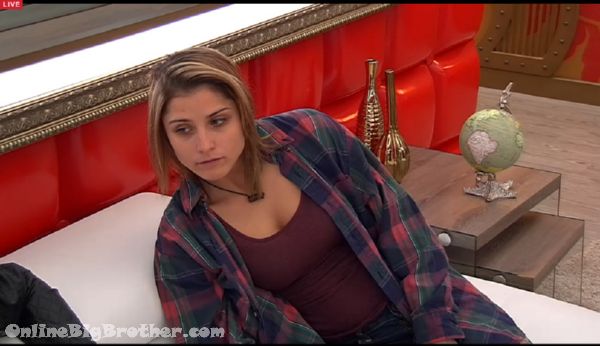 12:05pm HOH Brittnee and Sarah
Talking about Bruno freaking out. Brittnee brings up talking to Ashleigh where she said she might use the veto on Bobby. Sarah says Bobby is in an alliance with AShleigh.
Sarah – We figure that out weeks ago
Brittnee says there’s no way Bruno is going up.

Willow joins them.. Sarah is freaking out asks if Bruno would be mad if she used the veto on Brittnee. Willow doesn’t know.
Sarah and Brittnee now saying there’s no way the couples are going to put Bruno up against Bobby, “They’re too scared”
Sarah is pissed that Bruno didn’t use the double veto.
Willow – I’m telling you now I can’t beat Zach, Kevin, I can’t beat Bruno I can’t beat Bobby..
Sarah – Amen to that Sister
Sarah says Bruno is pressuring her to keep bobby she doesn’t trust Bobby
Willow – I trust no one..
Sarah – these guys are so f***G paranoid.. all of them… we can’t leave god alone with any of them.
Brittnee chimes in says it was mentioned to her that God was throwing her under the bus.
Sarah says they need to get “Those two” girls on their side but first they need to get rid of their boyfriends.
Sarah – Or we let those guys take out her boyfriend then she has no option
Willow – I’m next I’m the first girl to go..

Sarah – the line will get drawn it has to come
Brittnee – I feel Willow has put herself in a really bad spot and they can sense that
Sarah says Willow did it for them, She was committed to the couples but came to them becuase she can’t stand Zach.
Sarah – I wonder what Kevin’s final plan is
Sarah – I don’t know if it’s worth it for us to try and get Kevin to put up Zach
Brittnee says they need to get Bruno to do it, ‘We don;t say sh1t it’s time for him to say something”
Sarah is going to tell Bruno I don’t think it’s worth it right now I don’t see that happening but if Bruno thinks it can he can try, “He’s got more of a connection with Kevin”

12:53pm Godfrey, Sarah and Brittnee
Sarah tells Godfrey that they should drop a subtle hint to Kevin that now’s his time to make a move. Godfrey says that’s a long shot.
Sarah – I htnk I should just talk to him and Feel him out
Godfrey – ya do that

2:40pm Nothing much happening .. Godfrey thinks the POV competition will happen tonight.

On the global website for next week, one HOH, three nominees, two evictees… Hopefully zach and ashleigh are gone!

To the Curb
Reply to  tastyjane

Best case Zach,and pilar go home next week. The show would be more fun to watch without the ego filled zach and High school cheerleader pliar.

we posted this last week when it was first appeared on the BBCANADA site http://www.onlinebigbrother.com/big-brother-canada-3-two-round-hoh-this-week-with-3-house-guests-being-evicted/

I didn’t see it, sorry 😉 When the triple was announced I was expecting them to do the standard eviction flow twice (or maybe with an instant eviction, to save time). I love the idea of three nominees !

Posts get buried fast.. I hope the triple eviction stirs up the house the last thing I want is one of the two groups coasting to final 4.

Its so nice to see Sarah trying to shake up things!
Hope she will be HoH next week and take out Pili/Zach or Ash/Kevin

It seems like she’s lost it and is way over playing her hand. Whoever approaches Kevin to backdoor Zach is getting backdoored themselves. It would be something if she convinced Bruno to try but he doesn’t seem that stupid. Sarah was sitting pretty this week I don’t know why she’s running her mouth to everybody and about everybody. That’s why they call her poison.

If they drop a hint for Kevin to make a move, then that essentially means going after the best player. Zach isn’t they best player… When you nominate your closest ally and he goes during your HOH, you are definitely not the best player.

Bruno is in a good place right now as being the best player. And I like Bruno a lot, so I don’t want him to go, but if other people want to win he is up there as one of the best. He has a good social game, he has won HOH before so that means he is somewhat good in comps, and he is very strategic.

Sarah is one of the best players. She has Brittnee and kinda Willow in her back pocket, she is a great strategic player, the only thing lacking is her comp wins.

In my opinion the top tier players right now are Bruno/Kevin/Sarah middle tier Zach/Brittnee/Godfrey and the are you even playing tier Ashleigh/Bobby/Willow/Pilar. If those top 3 got together they could do serious damage in that house and it would be amazing. But I highly doubt they would.

Sarah is not a good player imo, she might be strategic but shes running her mouth way too much, almost as bad as Willow who will likely be her downfall.

Willow’s is such an idiot, if Kevin wins she’s done watching the show? If Kevin wins, it will be her fault for not being good enough to take him down, she doesn’t get to blame th show because she’s apart of it! How does someone who’s currently on BBhave the nerve to say something like that, if you don’t like him, take him out.

Ya BB should say..”Willow if you treating to never watch again…maybe we should pull you out…we are sure one of the jury would gladly take your spot..”

Some Name
Reply to  Kiren

I think Willow has a mental disorder.

It is just Willow’s way of pointing out that Kevin is positioned pretty well and he is a comp threat. She has heard various person’s in the non-Diapers assert that once Zach goes they will pull Kevin in. Willow is attempting to keep their eyes on the targets.

If bobby/bruno end up nominated who do you think gets evicted?

If they were smart Bruno, because he is awesome and actually knows what’s going on and has the possibility to win.

I would evict Bruno because he is the better player but I don’t know what these houseguests will do. I do hope it happens though, just to shake up the house.

That depends on Sarah and the Diapers I think.

Sarah, Willow, and the Diapers I’m not so sure about. Zach and Ash might think Bobby is stupider than Bruno and this more easy to manipulate.

Sarah doesn’t fully trust either so I’m not sure. Willow will go with the majority.

As it stands now, I think it would be Bobby who would get evicted.
Bruno is the way bigger threat, but as long as noone tells the Diapers that Bobby’s fake Veto is, well, fake, they’d see ‘Bobby + (maybe a) guaranteed Veto for next week’ as more dangerous than ‘just Bruno’.
Plus, like in many BB seasons, the eternal idea that “it HAS to be an endurance HOH next!!” makes them overestimate the threat of having Bobby in the game.
Unfortunately, I feel like Kevin won’t really try hard for the veto. Same goes for Ash, Pili and Sarah.
The odds are high that Bobby will win it. It would be great to see Bobby vs Bruno on the block, but I’m afraid Kevin will ultimately think that getting rid of Godfrey with the blessing of everyone (but Godfrey!!) is better for his standing in the game than getting rid of Bruno or Bobby against the (wrong!) advice of his own alliance.

Has Sarah been talking smack about Britt? Her loyal ally?

At least wait and see who wins the Veto, and see what Kevin has cooked up for the Veto ceremony.

Kevin is pushing for Sarah and Britt to win the Veto. I think if he or Pilar win they will take off Britt.

PS: Sarah, if you want to do better on comps then perhaps stop smoking so many cigerettes in the house! Shelly was a good social player, but never won anything because of the chain smoking.

I thought that Kevin would take Brittney off the block if he won as well, but I was disappointed to see him tell Britt in the HOH bathroom this morning that if he won, he’d probably take Bobby off.
Generally speaking, I think this was a stupid thing to tell her, since it really shows her “I don’t care about you at all”. If he had the intention of taking her off the block, then he should/would have told her “let’s talk after the POV comp”. It all looks to me like he’s settling for the safe Godfrey move and doesn’t even want to “flush Bobby’s (inexistent) veto”.
I hope I’m wrong though.

Zach was in the bathtub. If Kevin said he was taking Britt off then it would tip off Zach that he is considering leaving Bobby on and risking Bobby goes home, or, that Godfrey is not Kevin’s target.

saw someone comment about never seeing who wins HOH during the eviction shows a few articles back.

the reason we never see who wins during the episode is because those freakin intro recaps take up over like 5 minutes everytime!!!!

Sara, so understands that Britt is a hindrance, she brings nothing to the table. I`d want someone who can think and win comps. So, love Sara for playing the game!!! Isn`t that our complaint that these players are being played and not playing. Sara is playing!!!

As much as I want Zack out … Kevins to brain-dead for that apparently.
I think Bobby should get voted out for the simple reason of
volunteering to go on the block after he just saw what happen to JP.
What a stupid move.