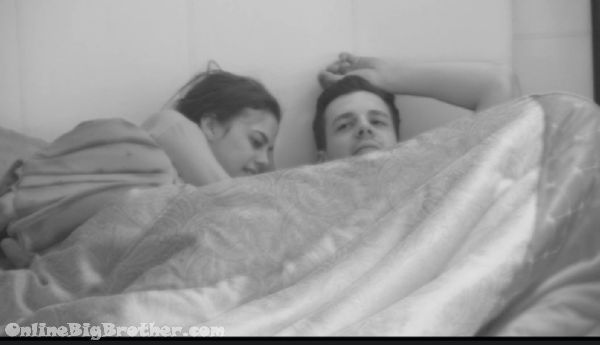 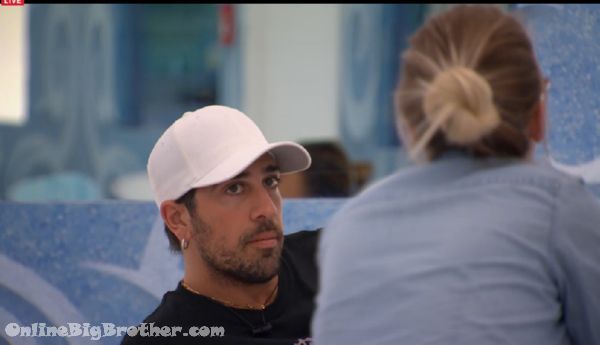 1:54am Bedroom Sarah, Bruno and Brittnee
Sarah going over things to say to Kevin, Telling him Zach has been running the game since the beginning and there no way Kevin is going to win against Zach. She adds that there’s no way Zach isn’t going to take those two girls
Bruno says Zach and Kevin are coming after him, Bobby and Godfrey.
Sarah – I know for a long time Zach has been throwing my name out there
Sarah tells bruno she’s worried about the guys tells him they need Bruno and in the game, “I can’t complete after QB1”
Bruno – They’re trying to get rid of the boys and once we’re gone they’re just going to f*** come for you guys
Sarah – I’m well aware we can’t do this on our own.. we need to stress to Kevin he has to do this before he’s done to.
Sounds like they are plotting to get Kevin to put Zach up as the replacement.
Zach and Ashleigh come in to get ready for bed. talking stops 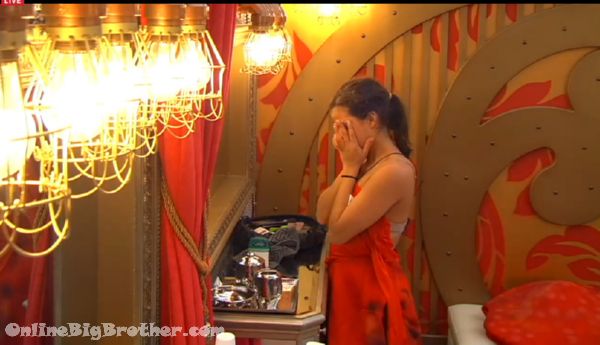 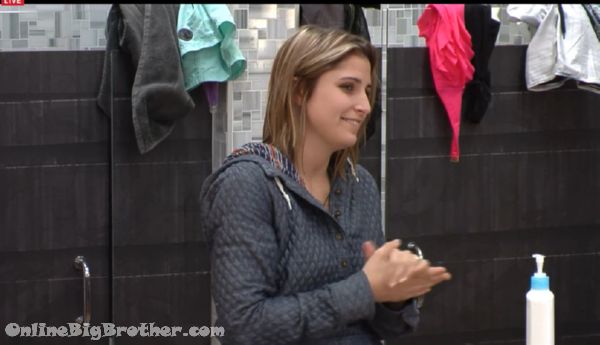 2:00am Willow and Zach
Zach saying they have the chop shop but they’ll have to cut them eventually. Willow knows adds they can’t beat Bruno they can’t beat Bobby
Zach – Do you know where Bruno’s head’s at
Willow doesn’t know
Willow says Sarah f****g hates Bobby adds that she’s trying to stay close to Sarah.
Bobby comes in says Big Brother is letting him take off his boots they didn’t want him to sleep with them on. 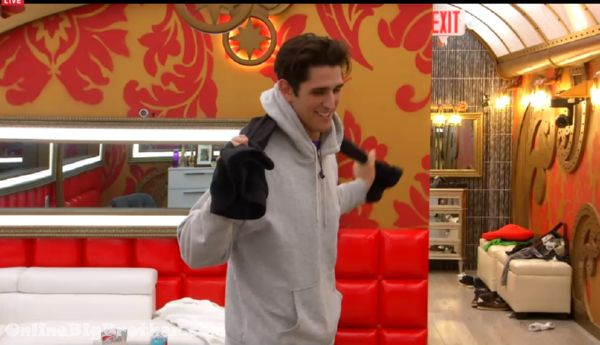 2:09am HOH Zach and Kevin, Pili
Zach going over his conversation with Willow. He mentions that Willow told him Sarah hates Bobby and Bruno adds if they keep Bobby/Bruno next week Sarah will go after them. He brings up that Willow told him if there was a couples alliance they were a “F***G powerhouse” They laugh that there’s no couples alliance but there’s a diapers alliance.
Kevin tells Zach to feel it out the next couples days to see how the house reacts.
Zach leaves

Camera switches to the bathroom. Zach tells Bobby “If you get Houseguest choice pick me or Bruno”
Bobby – Ya
Bruno – F*** ya
Zach – you know i’ll f***g pull you off

2:26am Kevin and PILI in the HOH
Pilar – you are so freaking cute..
Studying going through the days. Kevin says the order of houseguests going out during last weeks HOH comps was Sindy, Bobby, Bruno, Godfrey, Kevin, Sarah, Brittnee, Willow, Ashleigh, Pili wins!
Kevin tells her he cares about her a lot
Pilar – I have feelings for you like real feelings

FYI Feeds were on a bit this morning but nothing HUGE happened. they are down again as the houseguests pick POV players.

I would say overall Kevin did well with his nominations. I like Brittnee but I understand that he put her up because he thinks she would be a vote for Bobby. And feels that this might lessen the probability of every member of the Bru Crew to play for veto.

If Bobby wins veto and comes down, I could see him putting up Bruno. I really like Bruno a lot, he is very intelligent in this game and he is the brains in his alliance, and I could definitely see him winning the whole game if people don’t take him out. If that were to happen, I would only feel bad for Godfrey. Bobby at least from what I’ve seen so far in the game, isn’t the sharpest tool in the shed considering he still assumed the Chop Shop was still together not to long ago.

But if the nominations stay the same, I could see it being 4-3 with Brittnee staying. I still wish Kevin would jump ship and form an alliance with Sarah/Bruno/Godfrey to try and go to the final 4 but this seems like a pipe dream.

If Kevin actually does something exciting, I have a feeling production will be the influence

I’m holding out hope that Kevin could do something fun this week. Last week he was talking about how much he trusted production and how if he went out because of it, it was just his time.

Something fun *needs* to happen. Lately, keeping up with this show has been making me feel like I hate myself.

I don’t know what they’re thinking, Kevin wouldn’t be so stupid as to get out the biggest target in front of him (Zack) on his own week when he could attack Bobby or Bruno. What are they thinking…

I doubt Kevin would put Zach up as a replacement, but probably wouldn’t be sad if Zach was one of the causalities of round 2 HOH.

If the nomances win round 2 then Kevin, Zach, and Ash go up. If Kevin manages to win the Veto then Pilar goes up. Zach and Ash would go.

“If” Kevin were to put Zack up as a replacement tho that would be a HUGE move and I feel Kevin realizes this would be his spot light moment.

I hope so much that Godfrey goes this week, then Sarah wins HoH and sends Zach/Kevin/Ashleigh/Pilar to the jury house.

And what comp do you think Sarah will win exactly? God stands a way better chance to cause problems to the Daipers yet you want him gone. I do not understand your logic

OMG I love you for that comment about Sarah’s lack of competition skills!

kevin and pilar makes me feel tingly in my heart

Kevin and Pili make me throw up in my mouth!

like a defibrillator?
I don’t hate them. I don’t want to watch them make out 2 hours a day.

I will never have sympathy for Willow after the comments that she has made.

I’m not a Willow fan, but I’m still curious to know:
What comments are you referring to?

Yes, I said it
Reply to  Frenchie

She said the Jews got more respect during the holocaust than she does from the Diaper alliance. For what it’s worth she did apologize Profusely for it. It was the night her and Sarah shared that bottle of wine and agreed on a final 2.

Thanks! :)
Yeah, I remember now having read your recap, but it didn’t stick in my mind because I didn’t watch it – looked like too irritating of a convo to me… Plus I was annoyed that have not Sarah got the bottle of wine to begin with! ;)

Any one else notice that the boot order Kevin gave Pilar doesn’t include Zack?

I honestly think at this point, Kevin knows he doesn’t even need to watch what he’s saying to Pilar, she won’t notice anything anyway.
In this case, I think he just forgot to add Zach. But I’m sure he sees Zach as his “safety buffer” for when the other side of the house wins HOH – unless Zach wins the Veto that week.
Of course he doesn’t know about the next HOH getting to evict 2 HGs, so it might be both him and Zach walking out the door if none of them wins Veto.

another name
Reply to  just mauid

the boot order that kevin and pilar are talking about is the order of elimination in the hoh contest that pilar won. Zach was hoh and did not compete.

It sucks that there is now a designated pawn, while there are people who are escaping Week 7 without being on the block (Zashleigh, Willow, Bruno).

I have a feeling that Brittnee is going home this week. Sarah and Willow have no use for her (which is dumb long term, since the boys will cut these two when the showmances are a non-entity), and Bobby/Bruno/Godfrey have better statistics in competitions.

On the other hand, if they keep Britt and evict one of God/Bruno/Bobby then they are left with only 2 people that can challenge the Daipers in comps. And if Daipers get rid of the last 2 boys then Sarah, Britt and Willow are at the bottom. But at least I think they’re in a better position if they send her home because they need to fight the Daipers

Kevin is not genuine…there’s something dark about him…Pilar shouldn’t be with him.

There is absolutely no way Kevin will nominate Zach, not even sure why they believe this is a possibility.

Maybe they think Kev should to realize Zach is a comp threat and also put up his main ally as a pawn and refused to remove him from the block. So Zach cannot be trusted and can win if he’s in the final 2. But obviously Kev knows Zach is a bigger target than him and also that Zach is with the Daipers so he won’t send him home, yet…

Thanks for the correction :)

i didn’t realize you had already made that clarification anonymous, i hadn’t scrolled to the end yet and commented on it in regard to an earlier comment. sorry.