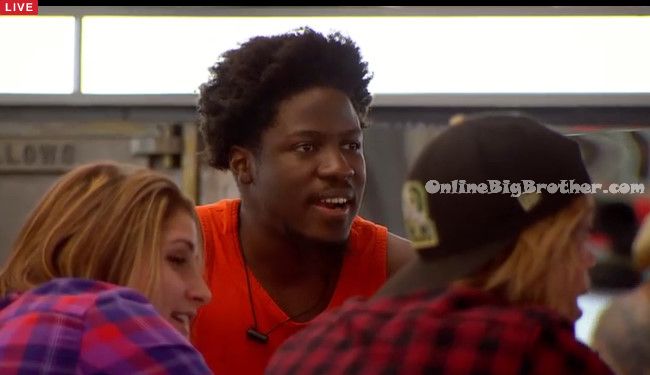 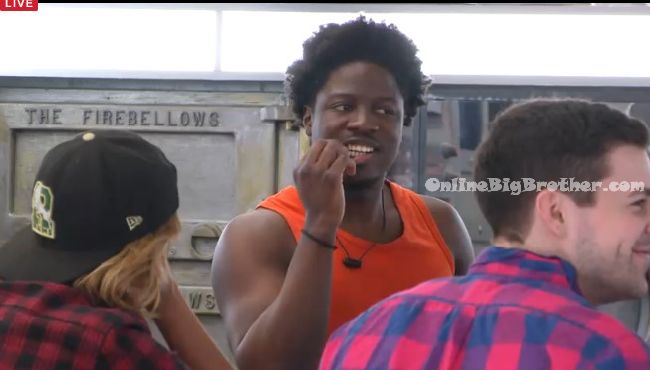 3:40pm – 5:30pm Big Brother blocks the live feeds for the Power Of Veto Ceremony to take place. Zach’s original plan this week was to b@ckdoor Bruno but after the house guests learned an evicted house guest would return Zach got scared and changed his plan to not going after Bruno just yet. He decided to wait to see how the POV competition would play out and then decide what the best game move would be for him. After winning the veto Zach has talked extensively about keeping the nominations the same and having Godfrey be this weeks target.

5:30pm When the live feeds return – we learn that Zach did exactly what he said he would do which was to NOT use the veto. Both Godfrey and Zach’s Newport Alliance member Jordan remain on the block where one of them will be evicted this Wednesday. All the house guests are in the kitchen chatting and making dinner. They’re talking about TV shows. Godfrey says all this meat left on the bone is killing me YO! Just put em in a bag and save them for me! 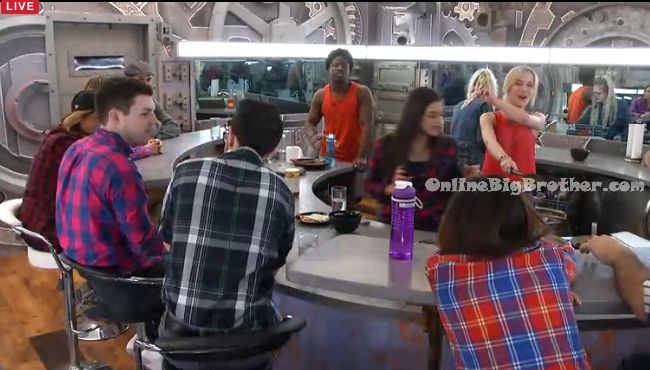 In the storage room – Sarah tells Willow I love you. Thank you so much for today. 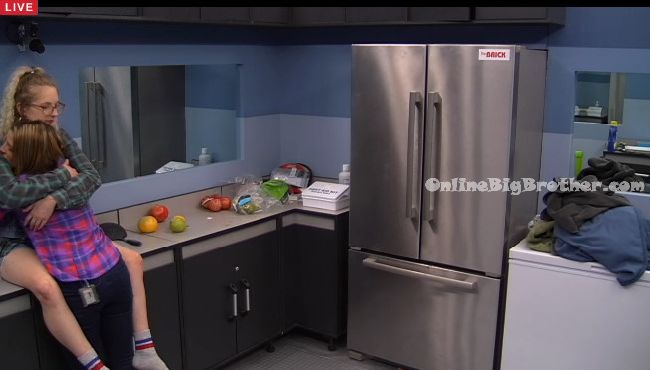 Kevin finds the clean sheets in the storage room and takes a bunch of them up stairs with Pilar. Pilar says the earlier he told Willow that the couples are working together. Zach joins them. Kevin says that was a good speech by Godfrey. Pilar says he’s going to go hard this week. Zach says he’s not going to be able to do anything. The others join them to help with the sheets.

5:50pm – 6pm In the kitchen – Bobby asks Ashleigh to not mention anything that he said about Britt to her..; about getting close to her. (Bobby told Zach and Ashleigh that he was just getting close to Britt last night to use her but doesn’t like her that way.) Ash says no I wouldn’t! Bobby says every morning he goes to the hot tub room to check for vetos under the seats. So if they (production) ever want me to stay on they know where to hide them. Zach joins them. Bobby says those speeches were epic! So good!

Britt, Sarah and Cindy are in the bedroom. Sarah tells them we can’t do the vote thing this week because they’ll know. (Throw three votes to Jordan to create paranoia.)

Big Brother gods, please use all your power to send Jordan home with Zach/Bobby following right behind him!

And it will happen if Sarah actually blows up Zach’s game…cmon…do it…..she is so close to doing just that…

jordan seems to be with sarah though

This week could be potentially HUGE! SSB wants to keep Godfrey, if they can convince Bruno and Bobby to come along that would be 5 votes and Jordan would be evicted. This would be the first week where it could be a non-unanimous or close to unanimous week. SBB + Bruno and Bobby could evict Jordan, Ashleigh, Pili, Kev and Willow (she could go either way) would vote out Godrey and Jordan goes and God stays. I want Zach out so much, he was playing amazingly well till his damn HoH week. He’s become so arrogant and I just want him out now. Sindy is giving me life, absolutely love her now.

Do you have a link to watch the Sunday show?

Spam production with ”Big Brother gods, please use all your power to send Jordan home ”

Sarah pisses me off, I don’t understand her obsession with keeping Parhar, Her social games is not as tight as she thinks it is… the reason I say that is JP just laid to her face and she literally had to make him confess, you don’t have JP… God told her the truth and that pissed her off… she cannot comprehend the fact that bru and bobby don’t like you…

Oh Godfrey, What are you now- The dog of the house? First you ask to eat the fat from the other HGs steak, now you want them to save the bones for you?
I mean, dayyum!!! Have some self respect, son! Lol
Dude, We know you’re supposed to play the role of the village idiot but you are getting that role too damn well! *smh*
With that said: try to get back in Bobby and Bruno’s good graces and you might just stay another week

Oh yeah Bobby! Britt has absolutely NO idea what you’re trying to do. *facepalm*

“No one is even gonna think about voting JP out”
-Zach

Sarah/Britt need to come to Bruno/Bobby and tell them about the original plan to backdoor one of them next week BEFORE Jordan does. That’s ALL they need to do!

I admit I wanted JP out at first, but that as before he started turning his back on Zach and relying more on Kevin and Sarah. I am not sure it benefits SSB to get rid of JP. Godfrey may sleep all day, but he can do well in comps, and I feel he would Coast over to Zach or back to Bruno and Bobby. Bruno never questions his sources (he never stopped to wonder why Zach told him about Godfrey throwing him under the bus), so I am not convinced he would believe Sarah if she came to him and try to f**k up Zach’s game. Bruno and Bobby are so blinded by the CS they are missing the rest of the playing field.

I am surprised Sarah and JP were not so close in the beginning. They are probably the smartest hg this season, and have a great perception of the divisions in the house.

JP knows that if Zach gets closer to Bruno and Bobby that he will be on their radar. In addition, after this week, JP’s blood will already be in the water like Sarah and Kevin.

I hope Sarah does blow s**t up, but SSB needs to join with Kevlar and JP. Why? Because Zach cannot play in the next HOH and without Godfrey, the CS would only have four people to play in the next HOH vs. six. Moreover, Jury must be starting after Godfrey leaves which means a double eviction is around the corner. This is the perfect time to remove Zach and Bobby and then pick Ash, Bruno, and Willow off.

If I was in that house I would need to have a secret thing going with another smart/perceptive player.

As hilarious as it would be for Jordan to leave when Zach was HOH, I just don’t think he will. As Sarah said it’s still a bit to early to make huge moves, at least in my opinion if I was in the house I would just send Godfrey home this week.

Now if Zach would have taken Godfrey off he could have gained that trust between them and put up Bruno or Bobby, people who have actually won stuff and taken out a bigger threat.

Is it official about the feeds?

I agree.. but it’s strange to block the feeds during those days.. it’s sad cause so much can happen.

no way will sarah get brunobby to believe her about zach. britt withvciny has a half chance. this is the time it isnt like either group hasnt seen jpach or figure that jp was meant as a backdoor opportunity that wasnt ever going to be kevin…..and brunos rabid obsession with sarah is why he’s not being bckdoored i guess.