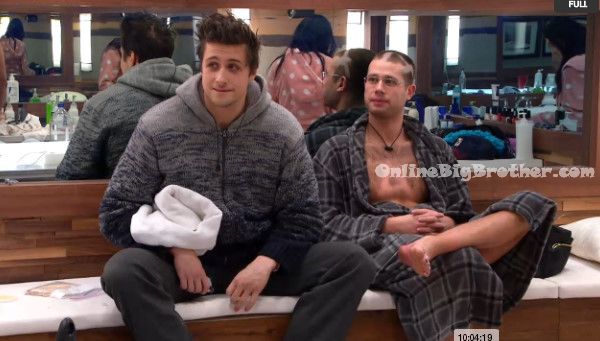 8:30am Big Brother wakes up the house guests. Kenny goes around to all the house guests to give them new batteries for their mics. Kenny comments that last night he was asleep for 3 hours when Big Brother woke them up to tell him the hashtag competition was over. He laughs and says okay. Jon realizes its St. Patrics Day and starts going around saying Happy St Patrics Day! Andrew says its against his religion to not drink today. Arlie says he asked for green hair dye. Jon says he misses his girlfriend. Arlie says how about today I pretend to be her.

9am In the bedroom – Kenny talks to Sabrina about how he already talked to Andrew about being in a showmance with Allison. It’s putting a huge target on his back. He’s already a big physical threat and now this. Kenny says that he told Andrew that showmances are a target and you’re in the only one in the house.

Sabina tells Kenny that Ika wants to put him up again. She says she talked her out of it but just so he knows. Kenny says that she is a savage little b***h and I am going to smile when I vote her out and she’s gone. Kenny heads down to the kitchen and tells Andrew about how Ika wanted to put him (Kenny) up but that Sabrina says she talked her out of it and isn’t going to now. Sarah asks if there is anything on the living room screens. They tell her the screens say POV Ceremony today. Kenny tells Andrew not to mentions anything about counting things around the girls we don’t want them on the same page. Sarah and Sabrina join Andrew, Kenny and Arlie. Andrew says he is making breakfast for the first five that come down. They laugh.

9:25am – 9:35am In the bedroom – Ika talks to Adel about the Power of Veto ceremony. Ika says that Andrew wants Paul gone. Ika says he said they got rid of Kyle for Kenny. Ika says well this isn’t Kenny’s HOH this is mine. Ika says I am not going to do their dirty work for them. Adel says I have a good chance at winning this hashtag competition because when my product went viral I got 4.7 million hits. Like a lot of people know this face. If you’re on the block, I won’t even think twice about taking you off! 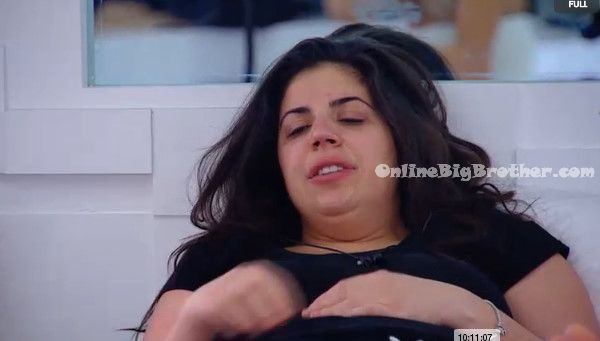 9:45am – 10:05am Kenny, Arlie and Jon are sitting on the living room couch. Above them on the tv screens it shows the that POV ceremony is today. Heather hobbles by them on her way to the kitchen and Arlie comment on how she has such a nice dumper. Kenny says she has been putting on weight! Like a lot of it. Not that there’s anything wrong with it. Jon says yeah you can see it in her lower back and face. Jon says all she does is eat. Ice cream & cookies. She doesn’t stop. Most of the house guests start heading into the main bedroom for the lock down. 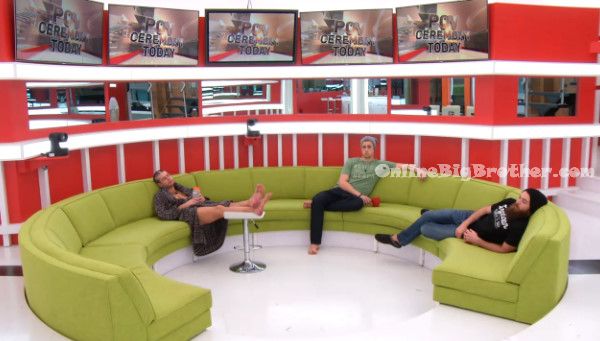 10:15am – 10:40am All the house guests are on the bedroom lockdown except for Ika. Adel asks what the correct term is for little people? Is it midgets? They tell him no little people is the correct term, midget is the derogatory term. Heather says yeah don’t call them Chicken Mc’Nuggets.

IKA COME ON PULL A BIG MOVE AND USE THE POV

Ika is Sabrina and Sarah’s puppet. She’s all talk and no action and like an ostrich has her head buried in the sand. I can’t wait for her (Ika) to find out their plans for her.

Ika should have nominated Ken and Andrew at first, then replaced with Sabrina if necessary, but the problem is that she doesn’t know about the first 5 alliance and firmly believes that Sab and Sarah are in this “girl’s alliance”, but at the same time doesn’t trust them. She knows she doesn’t have the votes to do it though, that’s the problem. So she thinks that she’s saving her self by not nominating Andrew and Kenny. Honestly I would have probably done the same thing in her position if I knew I didn’t have the votes to evict Ken or Andrew.

most people would in Ika’s position, but everybody on here can’t make the difference between understanding moves from a players perspective and moves that we would make after knowing every single thing thats going on in the house

Common sense should tell her she has the numbers.
Paul, Adel, Jon, Arlie would jump at the chance to evict a power player like Andrew or Kenny.
She knows Neda is with Jon.
She could have Heather’s vote in return for saving her.
Ika could break a tie if needed.

From Ika’s short-term safety perspective, Paul/Heather are OK choices, but she has a great opportunity IF she is willing to play hard.

She’s a target anyway. Better now than later when potential allies are picked off.

Anick, Kyle, Paul/Heather…then Paul & ? or Heather & ?….trust Adel or not, she must see he’s talking reality….she knows she’s targetable SOON if not next.

Dump the Duke or punt the Prince. Time for a palace revolt. She knows the masses are stirring. Does she have the courage?

the rationale for K’s budding “beard” faux~showmance with ms.S
is that it takes the HOUSE heat off of andrew’s often~real ones?

Kenny is horrible. ‘A savage little b*’. How nice.

IKA pull Heather off and put KENNY or ANDREW up!!!! Let’s see a big move!!!

Ika needs to pull paul off and put up andrew or kenny….. they would go home over heather but if you pull heather off and leave paul up on the block i think paul would be the one out the door….

hey, have a question you since yesterday I can not watch live feeds from nederdalnd on my phone. maybe you know why I can watch? no longer live feeds

The Big Brother Canada live feeds are geo-blocked so they won’t be viewable unless you live in Canada. One way around this is to use a VPN to trick the BBCAN slice website into thinking you’re accessing it from within Canada. We have VPN links on the site where you can sign up for only $11 a month.

Johhny (the European one!)
Reply to  Dawg

Is that why the links you provided in the forum to the 4 cameras now say
“The event owner has disabled this Event on this domain.
If you feel you have been blocked in error, please contact the event owner.”?

If ika pulled off Paul and put up Andrew or Kenny ….. That.would.be.epic

Off the above topic. About Sabrina and washing hands: Maybe Sabrina doesn’t use toilet paper after peeing so thinks her hands aren’t germy, not realizing anything she touches around the toilet, like the flushing handle, is teeming with germs. What a disgusting excuse for a female. I wouldn’t want to have her working on my hair for fear of getting something transferred from another customer or from her after she went to the bathroom. Ugh!

They should all be considering “What does Production want?”.

AND they should remember Powershifts and Twists!
Canada (so they say) saved Suzette and brought Gary back. Whatever you thought of Gary, that was a Production cheat.

“Getting a little help” should be in the backs of their minds.

They just got what was essentially a popularity/entertainer contest for goodness sake!

It’s simply another thing they should consider, IMO.

They don’t know this of course, but the Paul as AJ the buffoon and Kenny the secret gay guy arcs aren’t working, IMO.
They’ve not used Sabrina’s personality disorder villainy well at all.
If one subscribes to the idea they are “directed” in DR, then expect some course changes.

Johhny (the European one!)
Reply to  KDL

Well, they can’t all just lay down and die like Paul, Kyle and Adel did. now can they?
He understands the situation very well, and said repeatedly that it would be DUMB of IKA NOT to put him on the block.
Realizing you’re in trouble and working on ways to avoid getting evicted doesn’t make you a sore loser, but a proper BB player imo.

Nick
Reply to  Johhny (the European one!)

agreed. Kenny has some fight in him, and any good BB player should, otherwise why be there?

Besides, I highly doubt Ika would have taken it very personally if she’d known what he said. She knows better than most players in there that this is a game and you have to play to win, not make friends.

Ika would have been fine if she had put Kenny and Andrew up from the start. One of them would have gone home and nobody but Sabrina and Sarah would have been truly pissed because they are riding the coattails of the guys, since they aren’t likely to win many competitions themselves. Ika doesn’t even know that Sabrina and Sarah are with the 5. Lets say Kenny won the POV, Sabrina goes up as the pawn, the excuse that she is a vote for one of the guys and because she has a crush on them. That means that the only votes Andrew has for sure is Kenny’s and probably Allison.
If it went the other way, nothing changes, Kenny against Sabrina, Kenny goes home. Because for some reason, nobody realizes that if there is drama in the house, Sabrina made it up and spread it. She plants the seed and the girls accept it as if it was their own idea. I don’t get it, I don’t even think Sarah sees it.

She wasted the chance by putting up two useless players that she can beat in an HOH or POV competition. If she put up Andrew or Kenny now, she probably wouldn’t have the votes and even if she did, she would have a lot of pissed off people against her. It would show her where the loyalties lie though.

Is it me or dud Sabrina gain weight already? she looks bigger than when the show started? Her face/neck!

I’ve noticed she is gaining weight. The thing is she talks about how much weight she’s lost frequently.

I seem to be the only person who wants Ika to not use the veto and get out Paul. Everyone saying getting out Paul is a waste of an HOH week, but personally I’d rather have all the useless players out early. Almost every season there is someone who makes it way farther than they deserve (Spencer, Adam, Jenn, Jerry, etc) and they make it far because everyone just says, “Oh, we can get them out next week”, or “someone else will take them out”. It is obnoxious that these player just float to the end while considering themselves masterful strategists for making it to the end while being on the block half a dozen times. It was partly why BB15 got so boring, all the exciting character got out prejury then we were left with a bunch of boring sheep. If i was in the house I would only go after floaters

I agree Chloe. She wasted her chance to make a big move.

Can’t stand Sabrina but still glad she is on the show as she’s making things fun to watch.

She is fun to hate because there are so many things to hate about her..