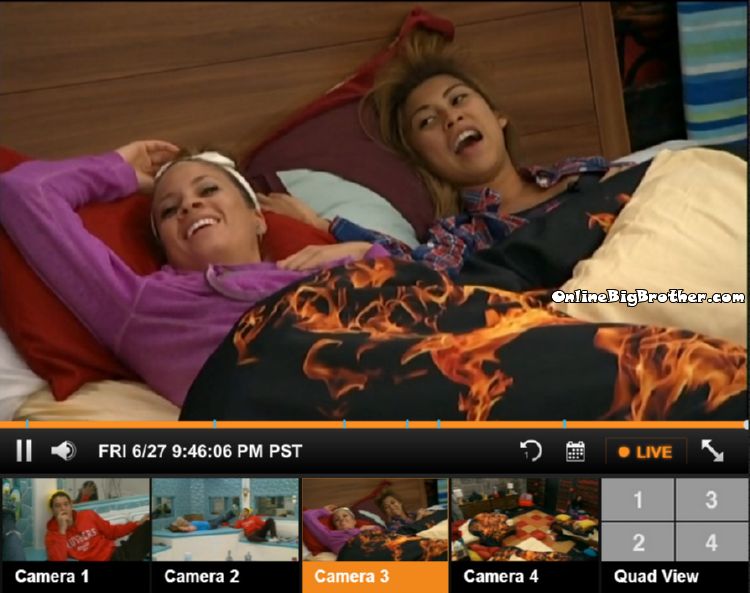 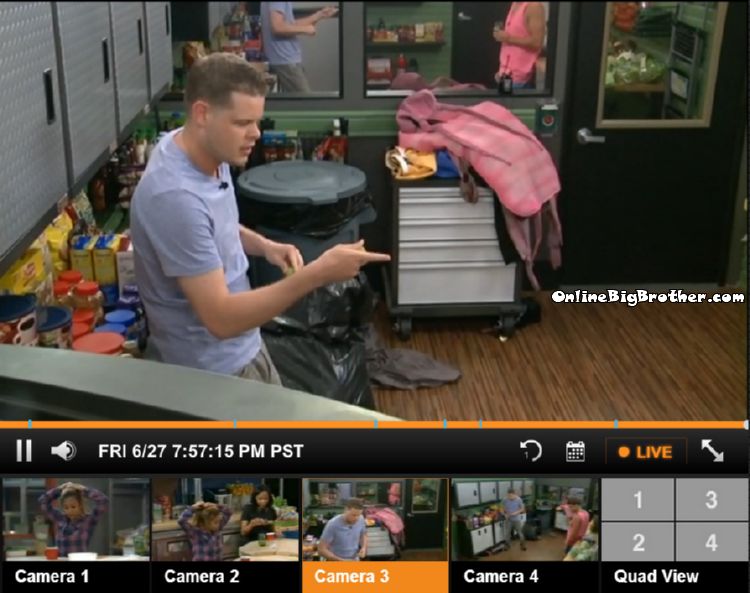 Zach say’s he thinks Caleb is going to put Joey up because of that “Whole Alliance thing” . Derrick – “I think you are right my friend”  Derrick “There’s technically only four people that he can put up Jocasta, Hayden, Nicole and Joey” Zach – “He’s going to put Joey up and we’re sending Joey home” Donny and Jocasta roll in. 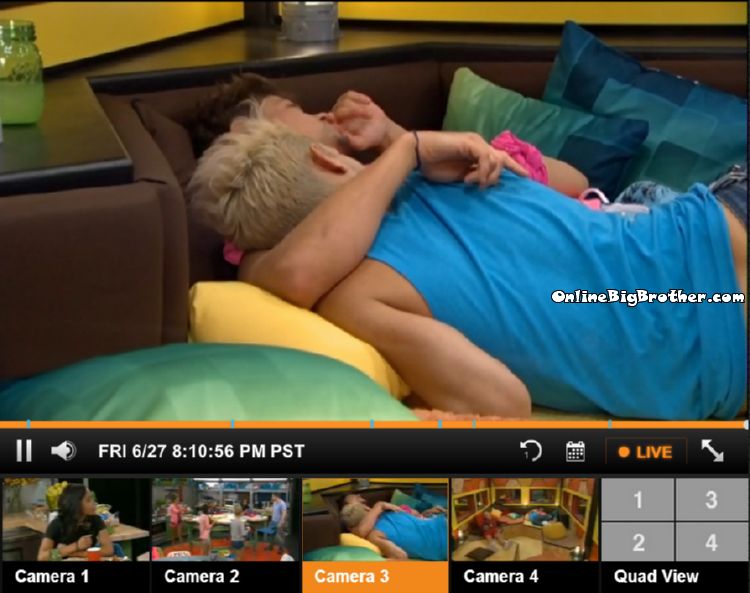 8:28pm Kitchen bunch of house guests in and out 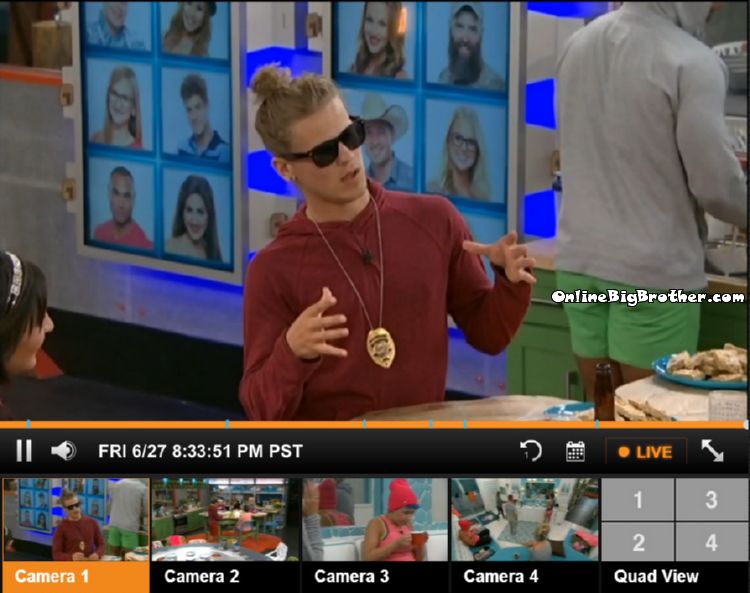 8:30pm Kitchen Hayden talking about his cockapoo named sugar it’s about “This big” 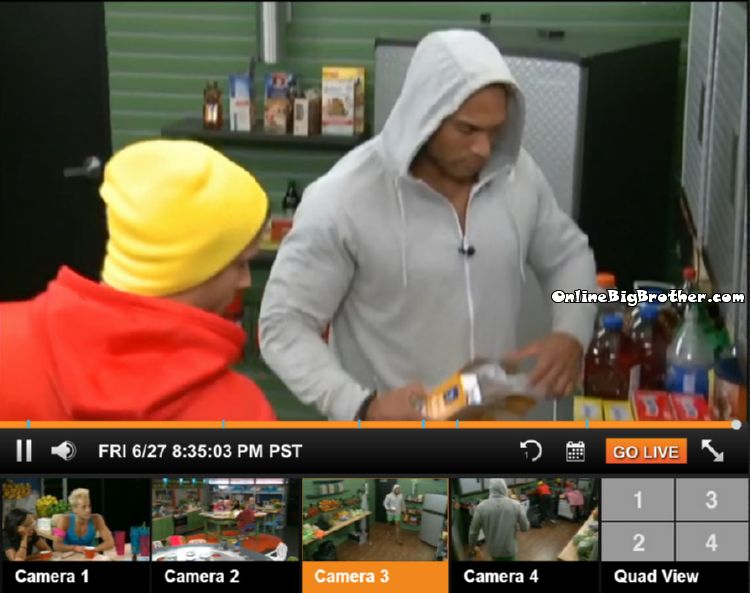 Cody is going on about letting their team down in the Power of Veto he apologizes for his performance. Devin – “It’s all good dude chill stuff happens” 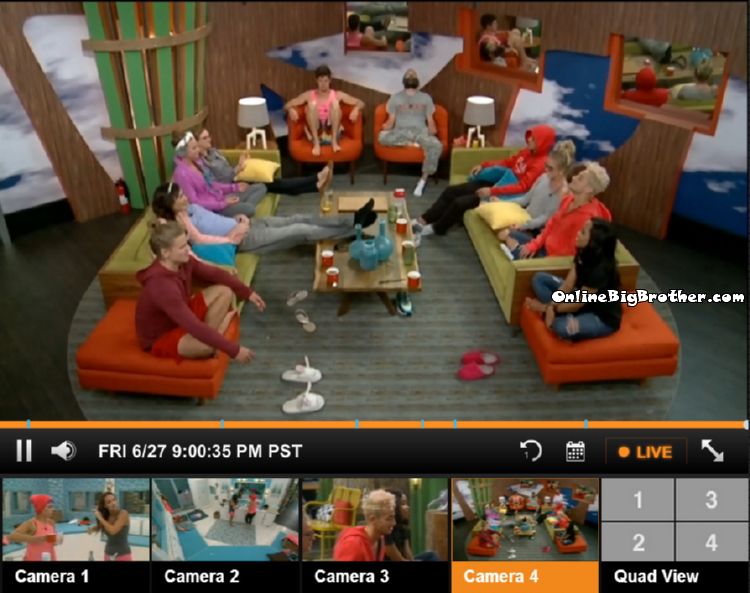 9:00pm Living Room Frankie guiding them through a mediation session. 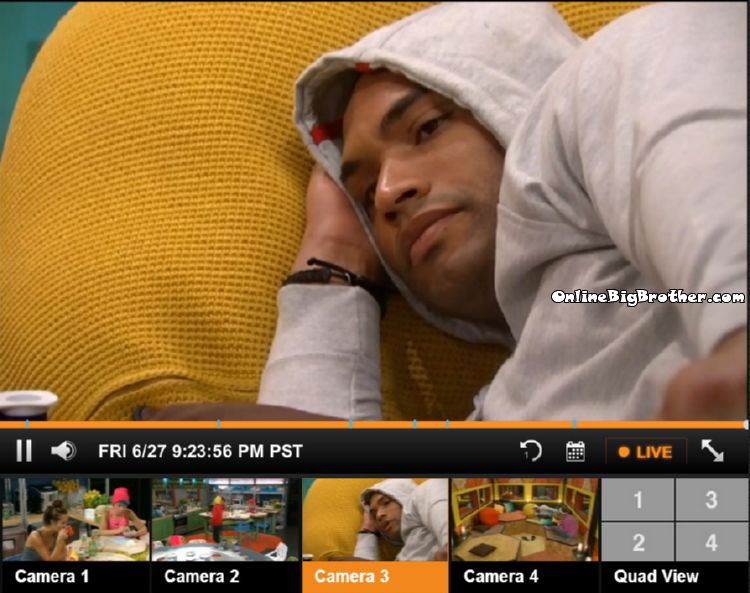 Amber says she talked to Derrick and he’s saying Joey should go up. Devin – “All the guys are in consensus because of what she did” Devin says his strategy right now is to just lay low.
Devin – “My goal is to stay out of everyones eyeline” Devin brings up Jocasta making such a big deal about how much he eats, “I weigh 235 pounds”
Devin – “I don’t have anything else to say about this game for the rest of the time I’m here and when that HOH comp comes up on Thursday I plan on winning it.. we have a 44.4% chance of having one of our alliance members in the HOH.. 17/15.. thats still not comforting”
Devin – “I’ve done so much dirty work.. you’ll see it at the end of the show i’m just tired of it”
Amber – “You are going to get far in the game”
Devin – “I hope so”
She offers to help him whenever… 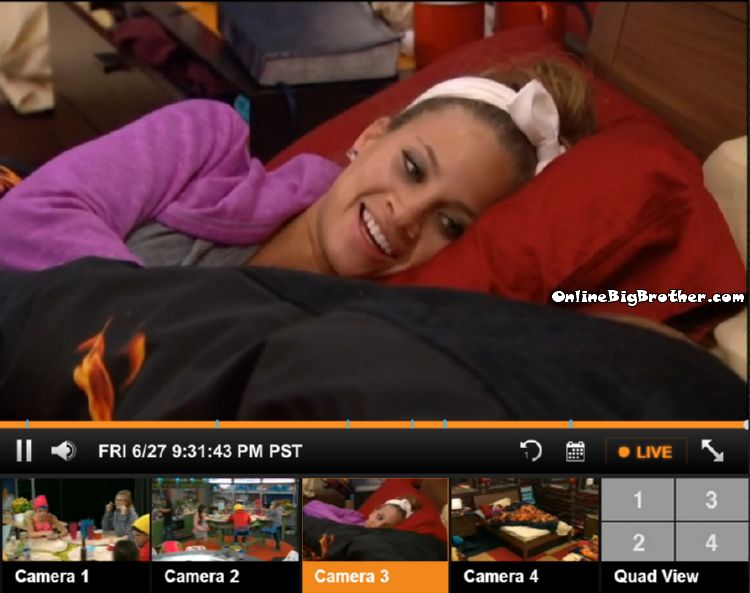 9:30 POW POW and Amber Fire Room
POW POW – “This game is crazy.. it’s just crazy.. we don’t know what is next”
POW POW is worried about what Caleb is going to do “Do you think everyone likes me in the house”
Amber – ‘everyone likes each other that’s the problem”
They have a laugh about POW POW’s attempt during the POV to spell “Calculator” they keep saying “Calturou” which what she tried to spell.
POW POW – “I tried”
Amber – “I want you to teach me how to DJ”
POW POW – “You’ll make so much money especially because you are so pretty
Amber mentions how the made up definition for “Calturou” is an embarrassing moment.
They start laughing at POW POW’s comp abilities. Amber – “We have to keep you around for more “Calturou” moments”
POW POW jokes her new name is “Triple S”
“Can’t Swing Can’t stand Can’t Spell”

These people are getting along way too well, which is awesome, because the longer the honeymoon phase lasts, the more combustible the house will remain after the first blow-up.

Hasn’t even been 24 hours and Frankie is really starting to annoy me. Him and Zack think they have the game in the bag, and I always enjoy watching that kind of player go early when they thought they were golden.

Woah ! Frankie and Zach look comfy, aha I cant wait to see this play out this summer. ZRANKIE !

Caleb – “I hate when a girl you know honestly likes you deep inside but she hides it cause she never want anyone to know about it and she plays a front she hangs out with everyone but you”
I honestly think he needs mental help.

It’s so awesome how gay-friendly the straight guys are this year. Like, FRIENDLY. lol

We might have our first gaymance this year.. Frank + Zach.

Frankie gonna get him self some!

Did anyone in there describe how the whole “Joey was the mastermind behind the girls’ alliance” got exposed? Did another girl rat her out? I can’t imagine her just flat out telling people… She isn’t familiar with BB, but I guess that would just be too stupid…

I think that’s exactly what she did – outed herself. As one commenter put it: a rookie mistake. I’m loving the Zrankie duo!

Joey asked Amber and others to be in an all girls alliance. Amber told the Bombs.

This, everybody getting along is sickening. We need some fur flying!

yeah, they won’t be circled around the jacuzzi singing kumbaya for too much longer!

I’d like to see them back door Devin. He scares me. I’d want him out of the game first!

Don’t say that then my summer eye candy will be gone. He’s the hottest guy in the house 🙁

I just love to stalk a purdy women , makes feel like I’m huntin!

It’s a little early for me to see who I like/dislike…but I’m NOT liking Caleb so far…..anyone who comes in gung ho to win the 1st HOH(showing off the whole time) is toast IMO….it’s just a matter of time…not to mention, he’s sooo ready for a showmance…..the 1st week? SERIOUSLY? Put it back in your pants dude! I never get these players who come in the house and showmancing is their main agenda…I’ve said it right here on OBB many times…Showmances SUCK! If I’m a HG? Caleb is number 1 on my list, followed close by Devin….I do think it’s funny Joey is in danger of going and it’ll mess up the whole America’s team thing….Sabateur part 2? LOL….

Me too – I would like to see both Devin and Caleb go soon – I hope the other HGs see it that way.

Wow..so far this season’s cast is 100% opposite last season’s! What a breath of fresh air! Hope it continues…

Is Zach gay?? if not you could have fooled me! Devin wants Joey gone because he has the hots for her and she is NOT reciprocating, nothing more, nothing less! Devin really needs help for his addiction(s) and bipolar, manic-depressive illness! He is so far gone, he is delusional! Almost everything that comes out of his mouth comes from a place of distorted perceptions and delusions– a sign of long term, untreated bipolar disorder. Stands to reason, as most people like him, who have done rehab for chemical dependency, are also dual diagnosed with some form of mental illness. He spoke of being in rehab, as the St. Louis Cardinals organization sent him, but did not mention what he was using. No matter, as a chemicaI is a chemical! I bet he’s not turning down the offer of liquor, though! Being clean and sober includes not using ANYTHING even if one’s drug of choice was not alcohol, you shouldn’t drink! He needs to be evicted so he can get the help he needs. Caleb, Zack and Frankie are very immature and think this is a high school social event. What a drag to watch these people who know nothing about the game all season long. I turned BBAD off after a half hour last night. So disappointing as I had hoped for more gamers with some brains and less model like pretty faces. I am just going to see how it goes and hope for the best. Thanks for the site S/D and for all the hard work on these updates. I think this site is way better than Jokers.

A good bet would be that his substance abuse of choice was steroids.