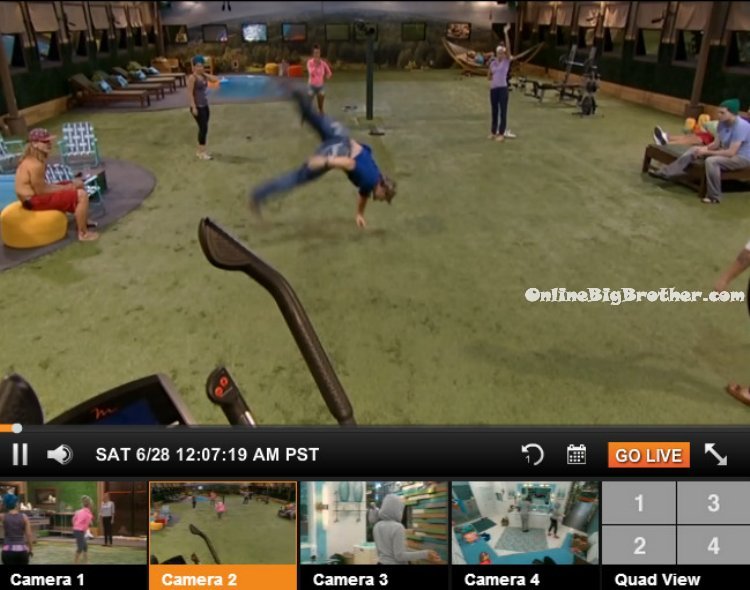 12am Out in the backyard – Christine, Brittany, Nicole and Joey are doing cartwheels while the the guys watch. (Derrick, Frankie, Caleb, Cody and Donny) Caleb jumps up and does a flip. Over on the hammock – Zach is alone. He holds up his mic and tells America that he is going to be in the final 2. He says we’re going to backdoor Joey this week, no problem. In a unanimous vote. He says one of the “Bomb Squad” Alliance (Frankie, Caleb, Devin, Cody, Derrick, Zach, Amber, Christine) is going to win HOH in the next 4 weeks. We’re going to end up evicting the next 8 people. Frankie, Caleb, Devin, Cody, Derrick, Zach, Amber, Christine are going to be the final 8 people in the house. But because I have a secret alliance with Derrick and Cody. And Frankie has a secret alliance with Christine and Caleb there’s no way that we aren’t going to win. Like I said before … I have the best social game here. Frankie joins Zach and asks what he’s doing. Zach says I’m just telling America the deal. Everything is going to work out perfectly. Our plan is fool proof. Frankie says that’s good you’re updating America. Frankie says that Nicole is hot. Zach says Nicole is HOT MAN! I’m going to make a move! Frankie says wait until you’re HOH. Zach says I knew coming into this game that I wanted to trust 1 person with my life ..you’re that person and you’re killing it!! Victoria joins them and the conversation turns to talking about random thing. 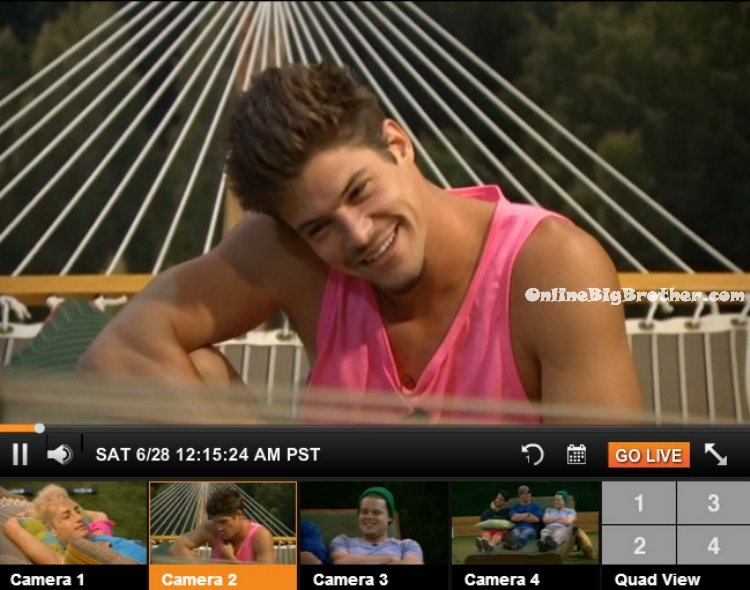 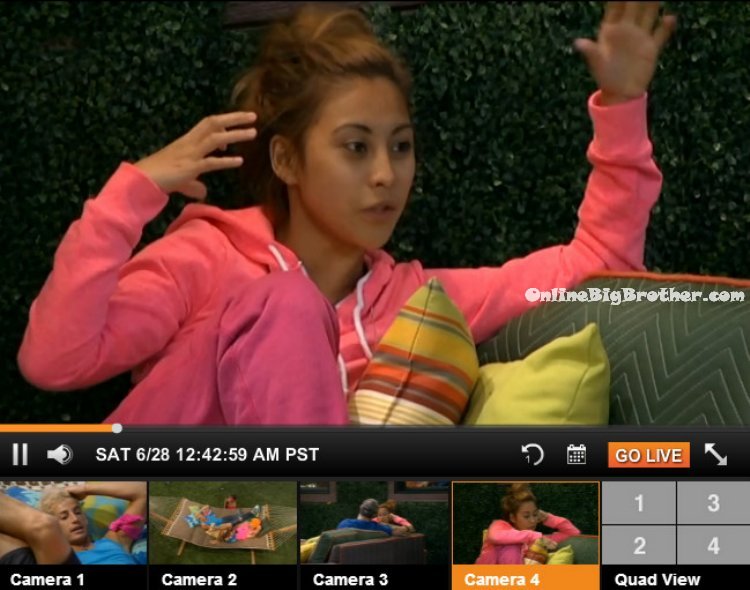 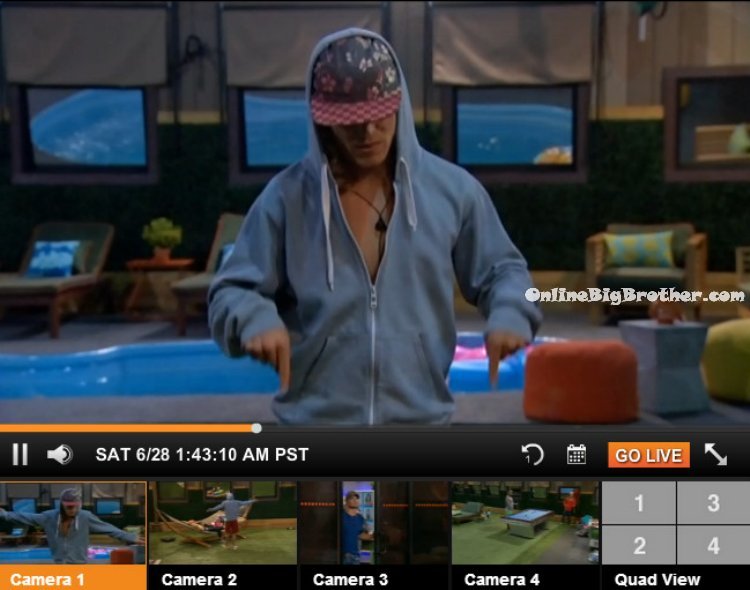 1:50am In the hive room – Nicole and Caleb are talking. He says that he is going to do what the majority wants. He asks her who she would want him to put up. She’s reluctant to say. She then says that she wants to think about it. Caleb says that he just doesn’t want to make a bigger target on himself by making the decision on his own. I want it to be a house decision. She says she’ll think about it and let him know. They leave the room. 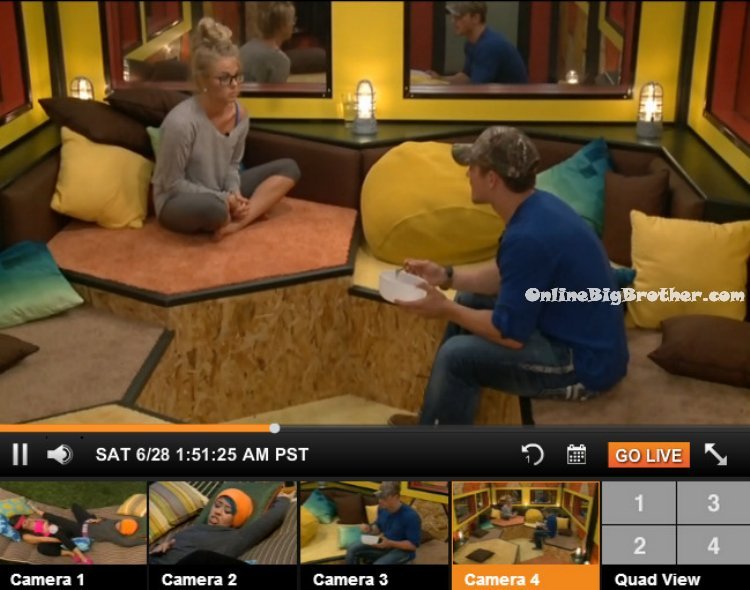 sure looks like joey is toast, at least right now, but it’s a long wait until the thursday vote. she needs to keep campaigning under the radar for now and look for opportunities. pow pow seems like a really nice girl, but i love joey.

maybe pow pow will have a breakdown and go off on the house between now and thursday – come to think of it, the breakdown will more likely be devin, not pow pow, just ask amber.

She needs to be making an offer to Caleb, not campaigning. The campaign idea is toast at the point someone is put up on the block it usually means that new nom is the one everyone agrees to go home. :) but all the alliances in the house, there isn’t going to be many available for him to put up. I’d put up Jocasta simply because she is unlikely to make a deal, and very expendable at this point. I think a lot would agree they would find her to be a non-blood-on-hands option. Joey would have to explain the alliance deal tho, and to be honest, she should tell him who was in it, and how enthusiastic they all were, and the fact that PowPow came up with the name, and it seemed to come out of only talk about how there’s never been a successful girl alliance.

Does it look like there is any Xanax or Adderall this year?
I like this group, I am getting a good vibe.
Thanks for being here OBB!

As sushi as it sounds? What

He’s just trying to be cool. Everyone else says, ‘As fishy as it sounds’

I am a big fan if The Bomb Squad. It is really helping out Frankie a lot. I just hope ado by will lay low the next few weeks and make some friend ships. I would like to see Frankie/Zach in final 2.

I like joey but man lay off the lame hipster hats. As silly as the girls in shorts and uggs. Your in California in the summer not aspen in January.

Caleb is way ahead of himself…. If she says she doesnt want to be in a relationship, she’s going to be out the door in 2.

Caleb sez: I asked “The House” what I should do, and ” The House” sez I should tie Amber up in the have-not room and ask her why she doesn’t realize how much she likes me.

The Caleb and Amber thing is horribly annoying!!! Next thing will be passing her a note in class!! “Do you like me? Y or N”

Someone needs to tell Zach its still the first week

Are there any smokers this season? Just curious.

Hi! Thanks for this great site, much appreciated. Can anyone tell me what the deal is with Caleb and Amber? Does she have any attraction towards him or is it one-way?

Zach and Frankie talking about final 2 in the first week… rookies.

Nauseating listening to Caleb profess his love for Amber every 3 seconds.