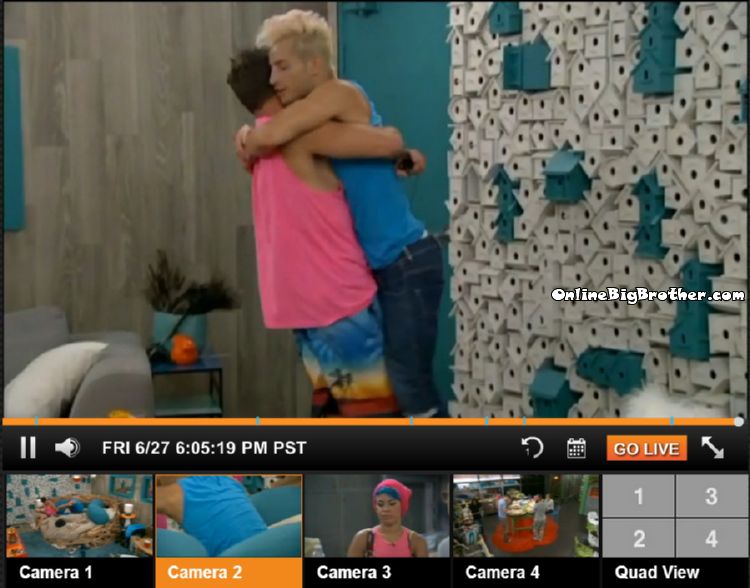 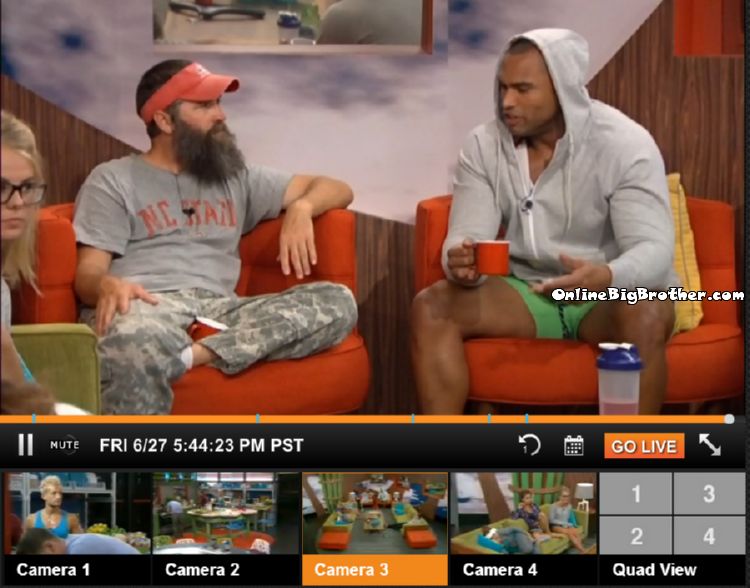 5:44pm Devin and Donny (Not sure what substance he was in rehab for)
Devin shares the reason he stopped playing baseball . Something about “Fall off the wagon” And going into Rehab. He mentions having extreme anxiety and at one point the team pulled him into a small room and demanded he went home check himself into a facility and get help.

Devin says he wasn’t ready to check himself in at first.. “Too me about a week” finally he went into Rehab willingly, “Did the whole program bought into it bought into the guided medication.

Devin – “the last week I was in there the Cardinals called me a released me from my contract.. Ii operated independently a couple years after that”

Says part of the program was to spend 90 days in a men’s facility “You could hear them detoxing from heroin.. at this time i’m 21.. 22.. and these were grown men” Explains they had a curfew and at that time he didn’t have a car so he rode his bike everywhere, Devin adds the meditation helps him relax and be mellow it really works for him.

Donny appreciates Devin opening up to him they agree to do some medication but not tonight they are too exhausted.

Frankie says Donny is a real threat right now but he won the POV. They agree POW POW is not a Threat. They joke about her struggling to spell “Calculator”.

Zach – “I think Donny will put up Caleb if he wins HOH” Zach mentions his secret fake alliance with Cody and Derrick and how Cody does not like Devin.

Zach goes over their divide and conquer plan. They each have a side alliance with two people they ride the 8 person alliance until the other side is gone. After that they use their side alliances to remove the other players in the game leaving just Zach and Frankie.

Zach – “we’re going to glide to the final 4.. when we get there we don’t have to scheme because we talked about this week one” 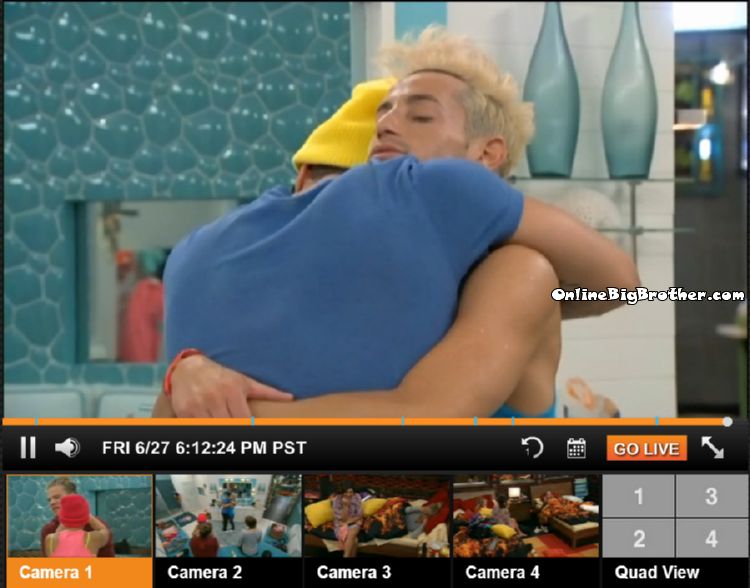 Cody is a bit worried about how close Caleb and Devin are, everytime Cody see Devin Caleb is there. Frankie says he has nothing to worry about “ I swear to god.. If there was something to worry about I would tell you.. I sleep in the same bed as the man.. I don’t hear every conversation but.. it’s too stupid for anyone to make a move on us.. you blow everything.. everything… cause whoever goes on the block blow it up” (Cody, Frankie and Caleb are in a 8 person alliance if Caleb puts any of those 7 up they will tell the house about it. Cody says he trusts Caleb a lot. Frankie tells him to keep his cool and just do what the house wants this week. 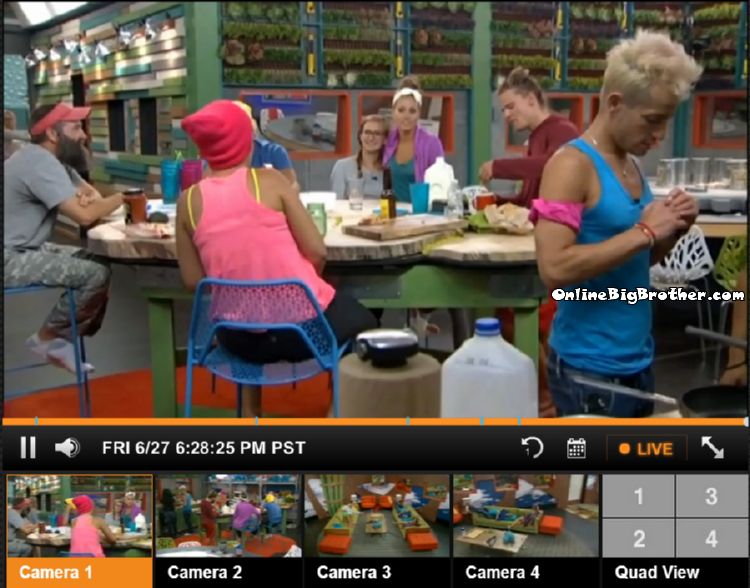 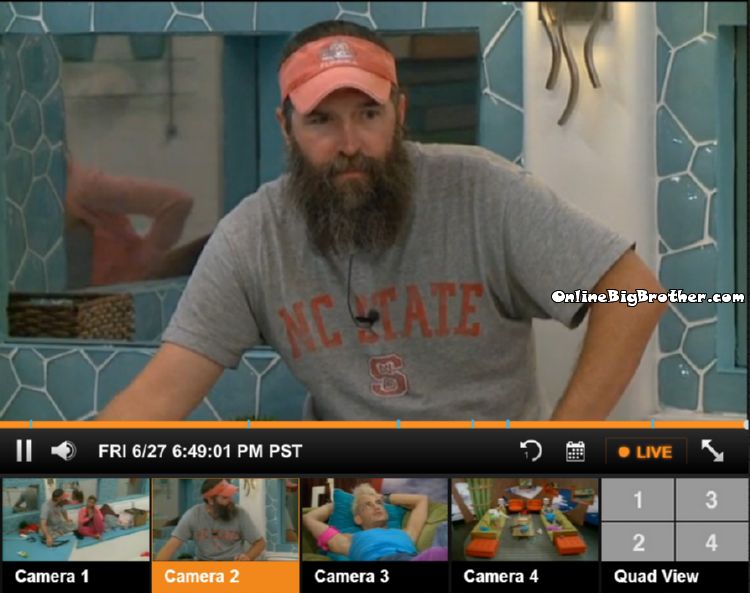 Doing is giving her advice on how to play the game  “Don’t get under nobodies skin.. be hunky dory happy happy happy.. Don’t over play it no more..” He tells her she was showing herself as a strong player by “remembering stuff, beating people in chess” POW POW says she’s the weakest player. POW POW wonders who is going up as the replacement nominee. Donny – “Don’t talk about that.. Be happy and chill the more you talk the more they tell thats the way it goes”

Donny – “just be happy low key low key, don’t act sad or depressed stay around people all the time.. people’s got to vote they could vote you to stay.. make friends individual friends not group friends.”

POW POW lists her friend off as Brittany, Jocasta and Amber. Donny – “you need to win over some guys.. you don’t hang out with guys” POW POW says she hangs out with Hayden and Derrick

Donny gets up ” I just found something in my mouth.. it’s slop I thought it was rice”

Big Brother 16 Live Feeds Subscriptions, if you don’t have them yet what are you waiting for! Free 2 day trial  Try It Free! Subscribe now to the official BB16 Live Feeds 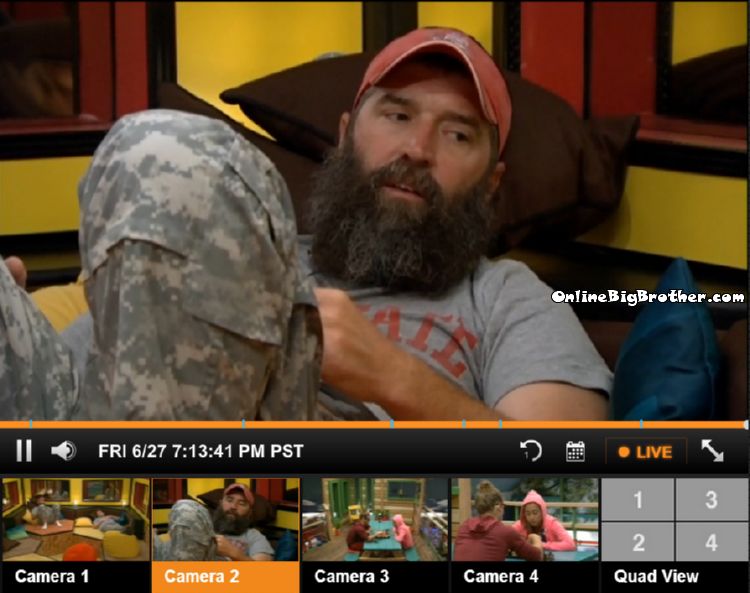 Derrick telling him about being a grounds supervisor says his home town has a really good police department. Donny says it’s crazy how they are both in the same line of work, Donny is a groundskeeper and Derrick is in more a management roll. Donny brings up killer bees coming up from texas. 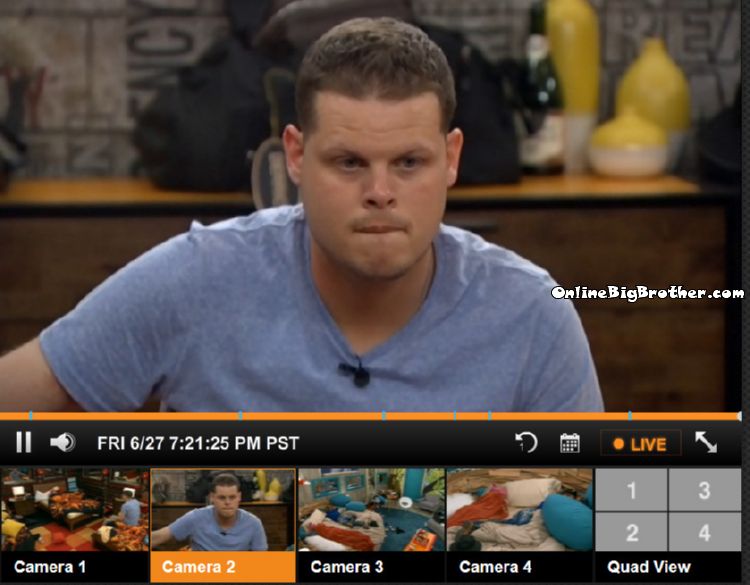 Derrick thinks Joey, Jocasta or Nicole all have a good chance of going up. Amber brings up if Joey wins HOH she might put them up. Derrick agrees asks her if Caleb is putting Joey up. Amber isn’t sure.

Amber nodes. Derrick says Caleb is a straight up dude he’s going to stick with the plan for the ‘Bomb Squad” to make it to the end. .

Derrick says Caleb only has four people he can put up otherwise he’s turning on the alliance, Nicole, Hayden, Joey, Jacosta. He asks her out of those four who would it be. Amber thinks maybe Joey.

Amber says she was excited when Donny won the POV adds POW POW is close to her “She’s been attached to me since day one” Amber also told POW POW she wouldn’t vote her out this week so she doesn’t want to go back on her word. Amber’s main worry is that theres an alliance out there she doesn’t know about. Derrick says if Caleb puts Hayden or Nicole up they may not have the votes to keep POW POW but if he puts Joey up they do. Amber doesn’t think Hayden’s head is in the game right now. Derrick – “He’s kinda floating along” They agree Caleb is talking Game all the time he needs to slow down. She asks him out of the four (Nicole, Hayden, Joey, Jacosta) who would he send home. Derrick says Jocasta isn’t really in the game, same with Nicole, Hayden is having a fun time. Derrick thinks they have a very good reason to put up Joey.

Derrick – “Donny pulled it off because Devin wanted him gone”

Amber – “Devin did but not Caleb”

frankie needs to get the hell out!

Has anyone noticed how many people are always hugging Frankie??? He’s doing really well. I still am pulling for Donny to stick around for a while I hate how the house targeted him already

What the heck! This season is moving so fast, I feel I can’t make judgements on the houseguests because we’ve only seen really 1 episode of each houseguests. I feel like everyone’s too paranoid also, even though they’ve been in there longer than what we’ve seen. They haven’t even been through an eviction yet so there’s no reason to freak out so early

Who is in Frankie’s side alliance with Christine? I know Zach has Cody & Derrick in his. Is it Amber, Caleb or Devin? I don’t think it would be Devin since Christine is scared of him. Or is it someone else? Please help!

i cant stand frankie! he needs to go soon. i like how zach and frankie have a final two deal when they first talked he wasnt nice to frankie. the houseguest i like so far are joey donny amber nicole hayden and cody.

I must say this, I had extreme dislike for Amanda’s personality last year but she single handingly made each eviction interesting as she would not let many weeks go by smoothly.

For that reason I really hope that we get a strong willed person (i.e Frank, Janelle from her first 2 seasons, Daniel and Evil Dick, Jeff, and even Rachel/Amanda.

This season needs that person willing to stick their chest and look at for their best interests therefore making this season more enjoyable.

Who agrees?
Any ideas on who that person can be ?

I think it could be Devin tbqh

I’ve really enjoyed this site past few seasons of Big Brother, but wanted to actually chat about the game. I feel Zach’s actual personality is coming out as he gets more comfortable in the house and his bromance with Frankie blossoms lol! I really like Cody and feel Caleb is trying too much to control everything as is Devin and that might be storyline going forward. I totally agree with Josh above that it needs someone like Amanda(minus the vile things) to get the fun/drama going! Looking for ward to a great season:)

How much are the live feeds this year?

Guys, please calm down. It’s only week 1. Week is usually a cluster fuck. Right now, i’m really rooting for frankie and zach because i personally love, 2 person alliances. I hate alliances that consist of more than 4 people cause then you’re just risking so much info being spilled.

I usually pick 4 players during the preseason when the cast is announced & this year its Brittany, Amber, Caleb & Zach.. so far so good.. way better than last year. thank you for the updates! it isn’t summer without BB

The more I read the more I have to stop..scroll up to the pics and see exactly who’s who because there is so much game talk and alliances going on it makes my head spin and it just started! btw, love this site~

Is it terrible I am gay and hate Frankie? He is so annoying to me- I don’t like loud people-Jeremy last year was loud and I didn’t like him either- it is not because he is gay or I hope not- I know even gays can be a bit homophobic at times as well- it can be a thin line- but he irritates the hell out of me.

Did any one notice the OBVIOUS sexual tension between Frankie and Zack!?!?!?!?! the body language? I thought they were about to hook up LOL