Big Brother 20 Spoilers – Nothing super critical has changed from the last update. The biggest news comes from the Scottie/Tyler conversation. Scottie saying that Fez/Swag do not intend to follow through with the BROS deal for safety. Rough Alliance map can be viewed here. 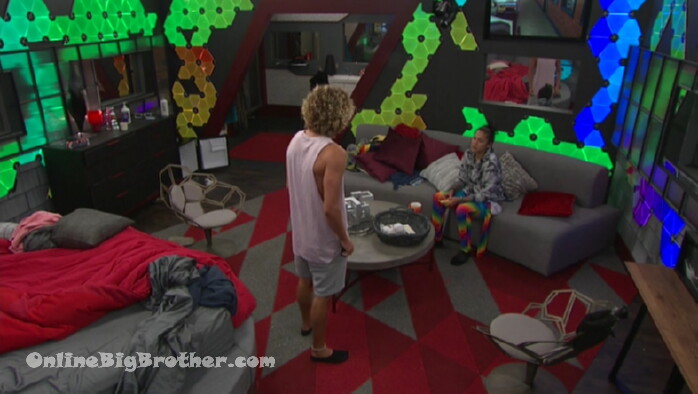 10:40am HOH Kaycee and Tyler
Tyler tells hee he was in the HOH with JC and haleigh last night, “we’re trying to infiltrate Haleigh”
Tyler – JC is trying to build some trust to pull her forward..
Tyler mentions that JC slipped names like like Rockstar and Swaggy
Kaycee laughs “isn’t haleigh and Rockstar close”
Tyler – yeah..
Tyler is going to have to talk to Haleigh to see what she thought of JC saying that.
Kasycee – you gotta talk to SAM
Tyler – I did last night .. I’m thinking maybe if we don’t feel we have the votes we should vote to keep her and say f** that unanimous thing
Tyler – what if Scottie has been f***ing with us and just wants Steve gone..
Kaycee – you think so
Tyler – I dunno
They agree to push for the votes to save Sam but don’t push too hard.
Kaycee mentions how they should convince someone on the other side to throw Sam a sympathy vote (haha that would be funny)

They talk about the Veto player meeting that Swaggy-Z called yesterday.
Kaycee asks if anyone on the other side is feeling uneasy about Swaggy running everything
Tyler – nobody said anything
Kaycee – that’s so weird dude.. I’m surprised..
They agree Brett is correct they need to lay low and let the other side break apart.
Tyler – they will.. as long as we’re strong they’ll break.
Tyler – it’s like they (the other side) wants to get pulled along.. they don’t want to do anything (that was 90% of last season)
Kaycee – that’s so weird .. I would not be OK with that coming into this game..

Noon Feeds come back after being down for awhile. 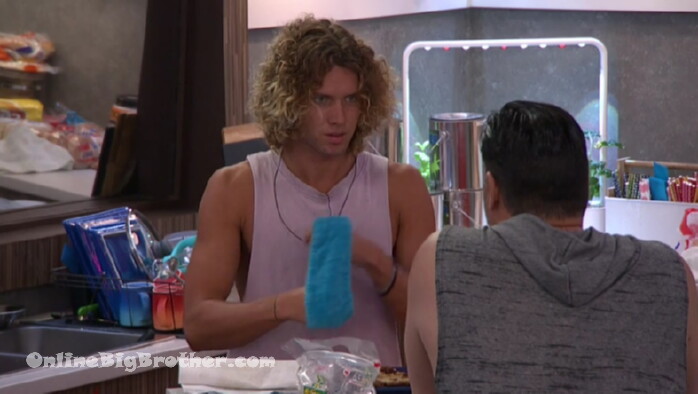 Tyler and Steve in the kitchen
Tyler – You’re solid
Tyler says he’s talked to a lot of people and it’s looking good for Steve.
Steve – the way I count it I got 11 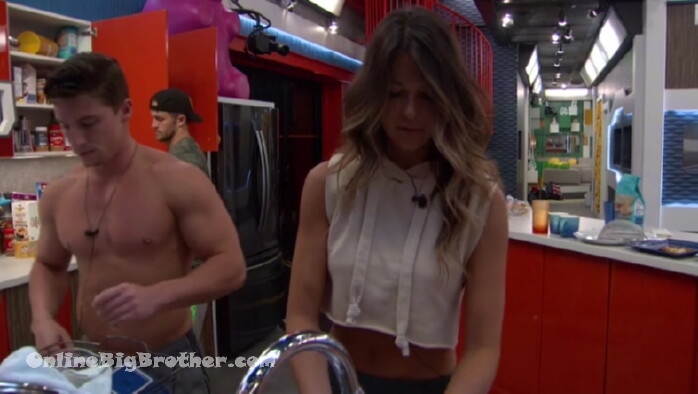 12:22pm Production – Robot Online
Sam was doing ROCKSTARS hair at the time.
Sam gives out some hugs before she leaves. 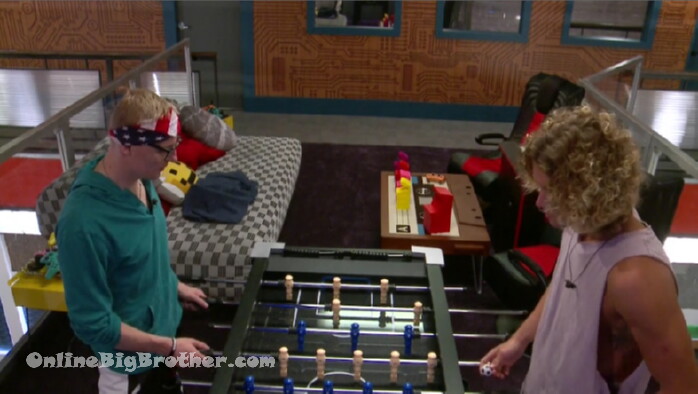 12:22am Tyler and Scottie
Scottie says he likes everybody. He’s annoyed by it he thought coming in there was 1 person at least.
Scottie – have you talked any game with Kaycee yet
Tyler – not a whole lot I don’t know where her heads at
Scottie says that KAycee is voting for Steve to stay
Tyler – she told him that
Scottie – I don’t know if that’s true or not
Tyler asks him if he’s still in that 5 person alliance (Bros).. Do you know where their heads at
Scottie says they wanted Bayleigh up
Tyler – they did
Scottie – yeah.. because they made a theoretical deal with Swaggy and Fez..
The deal is the Bros and Swaggy/fex won’t go after each other.
Scottie adds that Swagz and Fez won’t honour the deal. “They think they’re lying.. they think if either of them win HOH they both go up”
Scottie – yesterday I heard a runmour that Kaitlyn would put me up
Scottie says he talked to her about it and she denied it than said she may have said it but she didn’t mean it.
Tyler – she should have ran that by you first

Get your Feeds through this link 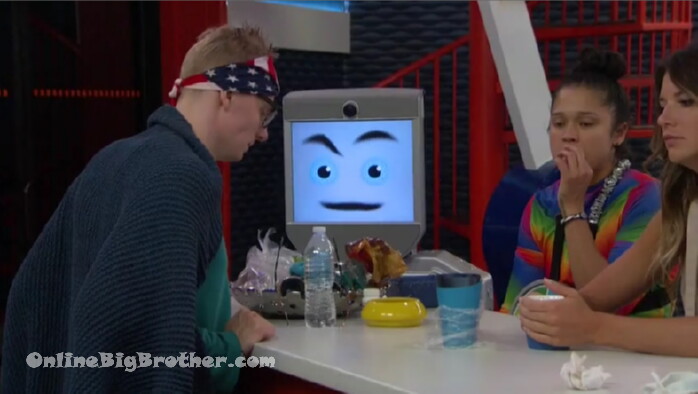 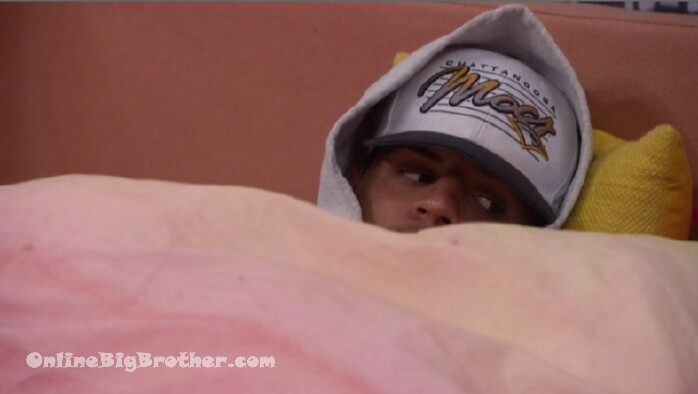 12:40pm Fez and Kaitlyn
Fez – why would you say that.. I’m kinda insulted
Kaitlyn – OK ..
They agree they’re in a good position.
Fez – if you get houseguest choice you have to pick me..
Kaitlyn – I will
Fez – every time
She goes on about how great it is her friend in the house can win competition.
Faysal says he was going to throw it but he decided to win it to make sure the Veto wasn’t used. 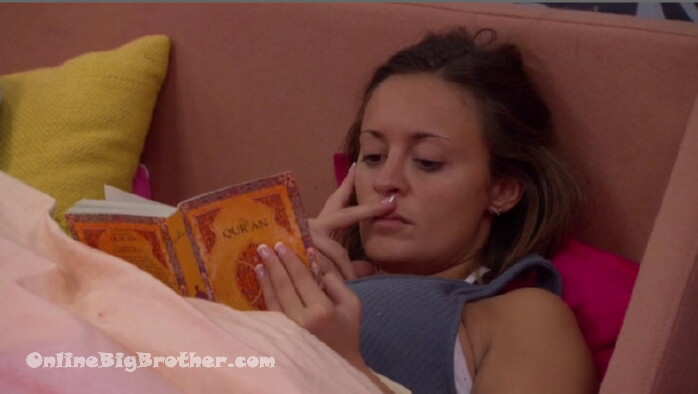 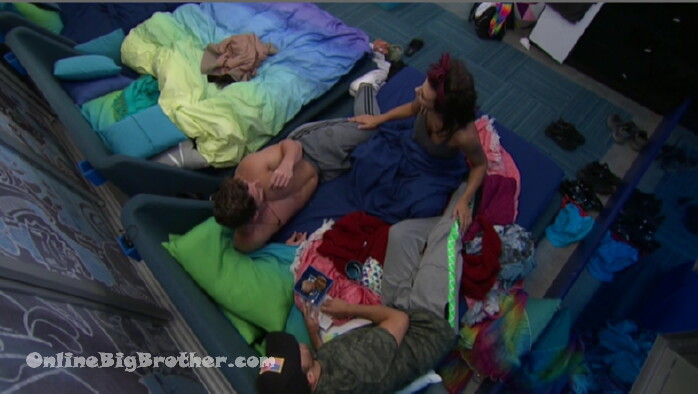 12:51pm Rachel doing what she told us she would in pre season interviews… 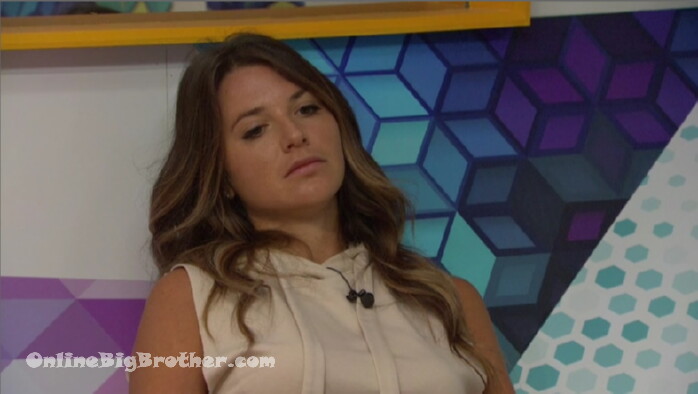 1:00pm Angela and Kayccee
Angela wonders why all the other girls dislike her so much, “I didn’t do sh1t”
Kaycee says it’s because she doesn’t have to do anything extra to get attention from the boys whereas Kaitlyn etc have to try hard.

Angela – they all think I have the power.. I’m like 90% sure JC has it
Jaycee – I think he does
Angela – they were telling Tyler to drain her power.. they think I have a veto..
Kaycee – they were pushing so hard it was so funny..
They agree Brett is right they have to let that group eat  it self.
Angela is worried that the other side has so many numbers they have a good chance to win the HOH.
Kaycee – I feel like they have some flip floppers.. we’re solid.. Anything can f** ing happen..
Kaycee – non of us are attached to them but they have people attached to our side
Angela notes of different people are getting from day one
Kaycee says she doesn’t like swaggy
Kaycee – we have to get him out sooner than later..
kaycee adds that  Swagzz told Tyler “you already know I’m the kingpin of the other side.. But I wanna lay low I don’t want them to think I’m the king even though I am the king of the other side”
kaycee – he really said that.. that’s just crazy…
Kaycee – Swag and Fez are the same they are so oblivious of the way they act..
Kaycee brings up Fez going to Winston and Brett saying if doesn’t use the Veto they won’t put each other up next week. (huh there’s a lot of versions of this story going around) 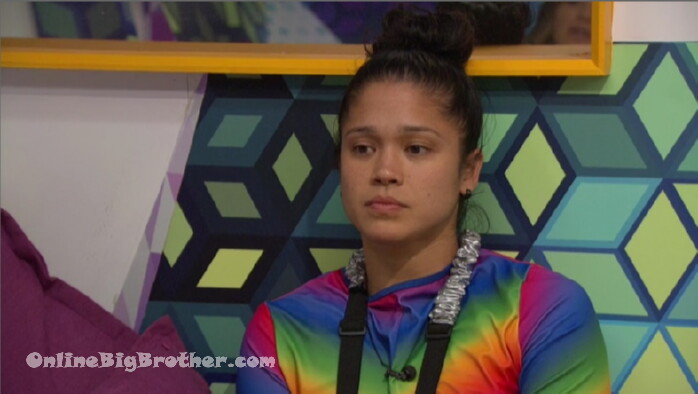 Kaycee says Faysal is a “need motherf***er” all he does it complains “I can’t stand him.”

Angela – Kaitlyn is the worst.. she’s absolutely the worst..
Kaycee has a big problem how Swaggy is running around telling his side what to do. She can’t believe all those people are following him.
Angela says it would be so funny if someone wins HOH and says “I put up Swaggy and Fez because all of you are his  puppets. You’re better than that.. quit following someone else. how dare you bowdown to someone”

Angela says they have to get one of them out.
They agree Swaggy should be the first to go
Angela – I would put up ROCKSTAR and Fez ..
Angela thinks they would throw the Veto to Fez and Swaggy would go up
Angela – if one of us gets power one of them are going home
Angela mentions how Haleigh was pissed she wasn’t pulled into the veto players meeting yesterday. Tyler and JC are trying to pull her on their side using that as a wedge.
Angela says JC is with them but outside the circle. She’s worried a little bit because he sometimes goes off the deep end.
Angela – I trust him but I’m scared of telling him anything, He freaks out
Angela mentions that JC was throwing out names last night to Haleigh and said ROCKSTAR
Angela thinks JC is starting to burn his brdige to the other side she doesn’t see him going over there, “Once he’s on our side he’s on our side”

They wonder what Scotties deal is..
Angela – I know he’s Swaggy’s little rat
Kaycee says it was funny how Swaggy tried to turn it around that it was BRett/Winston that came to him about the deal.

Kaycee and Angela talk about how the other side is going to flip out after Sam stays.

1:20pm Swaggy is helping Bayleigh get her hair ready..

Swagz and Bayleigh getting ready for the day. #BB20 pic.twitter.com/0GWu2yhRST

We haven’t seen Kaycee’s pinwheel punishment go off that much (forcing her to stay in a room until it stops), but Fay has to eat loads of fake ham.

And Sam’s punishment is so much worse in comparison to Kaycee’s. It destroyed her social iteractions right at the beginning of game play. She can’t get those back.
Thanks for a great start to a new season Simon and Dawg!