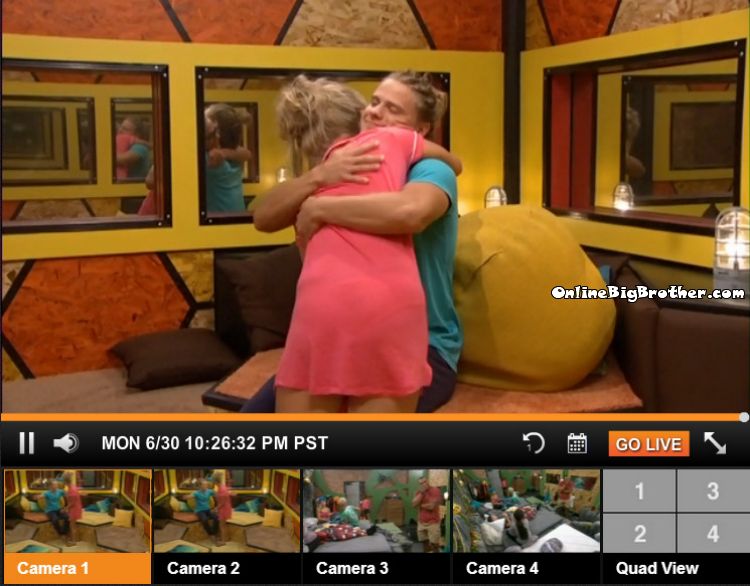 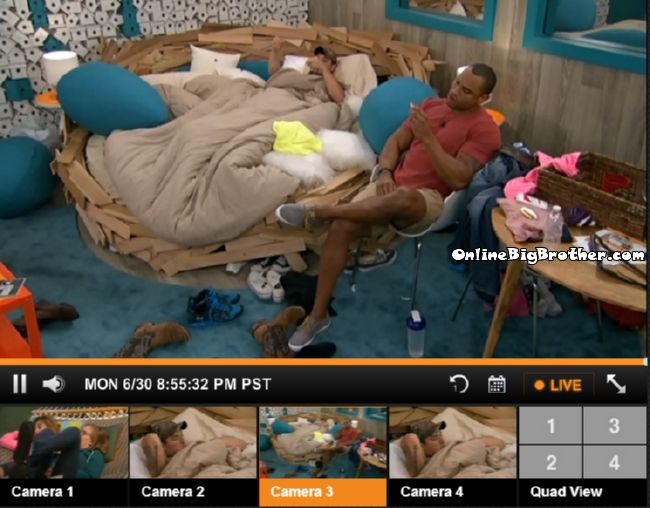 8:55pm Devin and Caleb Devin asks him if he’s worried Caleb isn’t he’s just tired and keeping to himself.
Caleb – “What time is it”
Devin – “9 something”
Caleb- “I’ll probably stay up here for the rest of the night”
Nicole joins them for awhile chit chat
9:14pm Devin and Caleb
Caleb is down he says theres a lot going on in his head right now. Devin tries to help him feel better.
Devin saying he has a new found respect for Donny, If he wins HOH he’s not going to put him up. 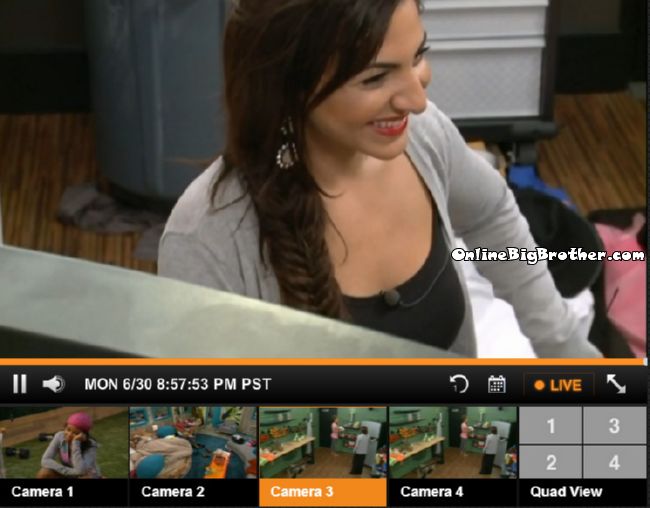 8:58pm Victoria and Amber Storage Room
Victoria brings up a conversation she had with Caleb where he told her Amber’s not interested in him.
Amber saying she told Caleb him that in the nicest way she could. Victoria adds that Caleb was saying who his ideal woman is and it’s not Amber..
Victoria – “He wants a showmance. maybe not with him he wants the season to have one”
Amber says she told him “I’m not trying to have any of that.. ”
(The feeds cut in on this conversation late.. don’t fully get the gist of it) 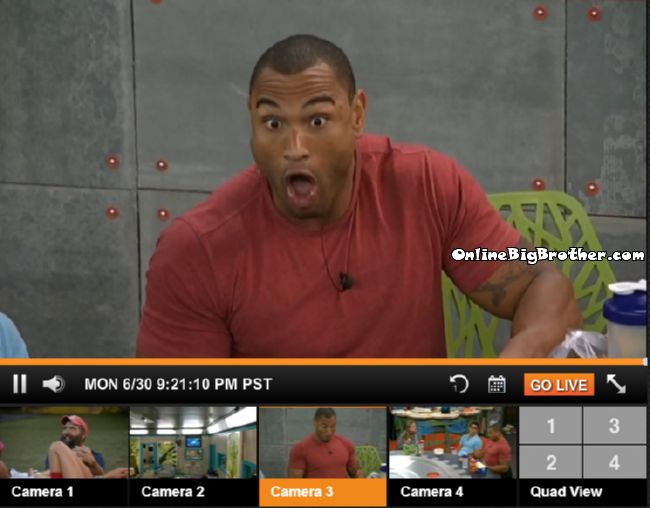 9:24pm Christine, Hayden, Cody, Devin Devin explaining GinaMArie last year during the Froyo competition. Her stomach was “bloated” it looked like she “gained 20lbs”.
Devin says he has a Justin Bieber on his Iphone “I’m not going to lie I like his voice” They start talking about things they could get to help with the boredom. Someone mentions darts. hayden says when he was a kid his friends would throw darts in the air on their feet for fun, “We had all these holes in our feet” 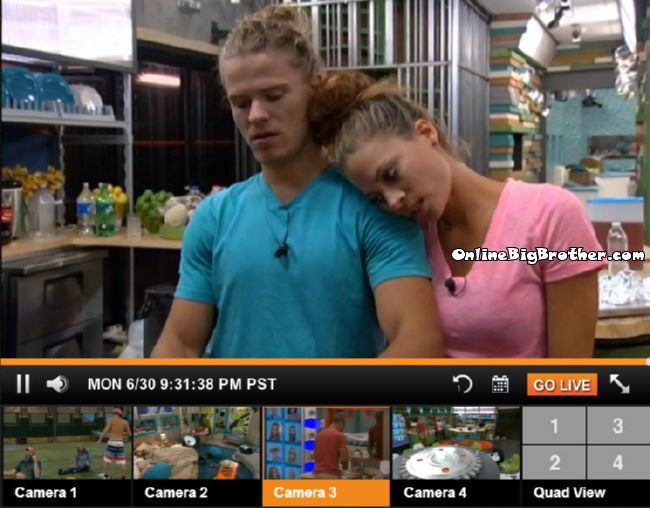 9:31pm Pretty uneventful in the house right now.. but wait lookie here. (Caleb may have seen this I think he’s starting to get the message) 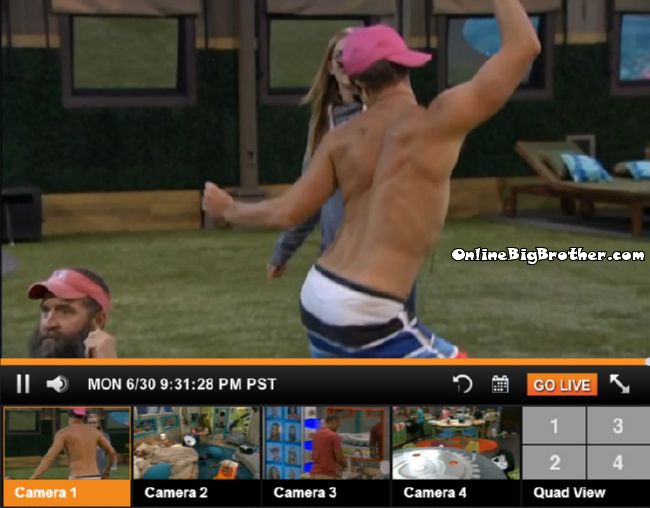 9:31Pm Zach showing off his moves to Christine 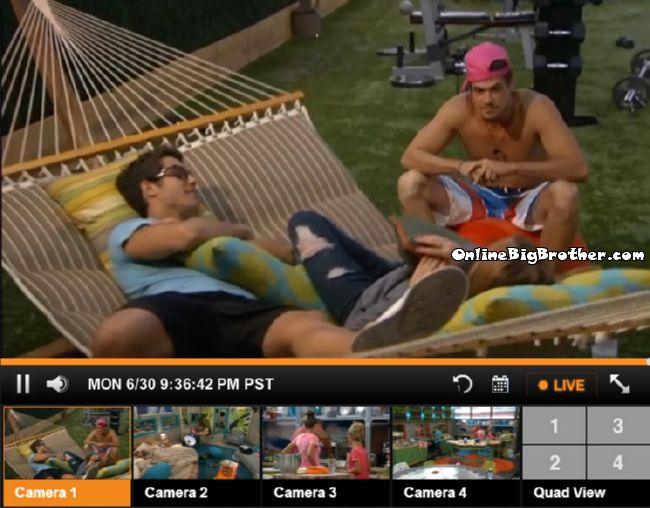 9:39pm Hammock Cody, Christine and Zach
They agree Joey is going home this week. They don;t think there is anything left to talk discuss. Talk drifts to tanning. Cody says when he tans he gets dark like “dark Chocolate.. no like Milk Chocolate”
Zach starts stresses that Cody HAS TO WIN HOH. Cody wants to. Christine – “Zach wants to sleep all day”
Zach wants Brittany, Donny and POW
Cody says he won’t put up Brittany it’ll be Donny and POW
Zach – Whoever you want home put them up against POW.. she’s the Spencer of this year”
They all claim none of the final 3 last year deserved to be there. Christine says Amanda should have gotten to the final 3. Zach says Helen was good but it went to her head. Christine – “Oh Helen was so good”

Zach – You know what blows my mind.. we’re in a 8 person alliance.. is that allowed
Cody – Thats great especially for us
They start talking about Amber and how she’s been digging for information. Cody – “I told her nothing” they mention how she’s saying she doesn’t like Caleb “Like that” 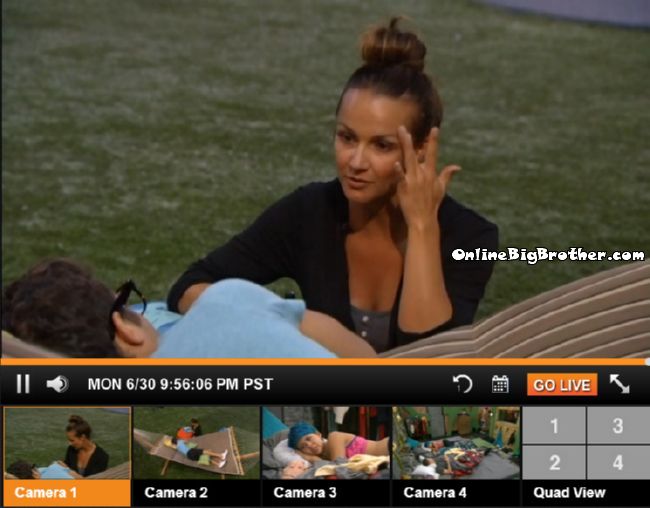 9:55pm Brittany and Cody Hammock
Brittany says a lot of people won’t tell her their vote because they are scared she will run and tell that to joey.
Cody well would you do that
Britinay – no
Cody tells her the majority of people he talked to is voting out Joey. Brittany thanks him for telling her. Cody tells her to make sure that it doesn’t come back to get him.
Brittany is scared that the house is going to set her up everyone is gong to vote out Joey and she would vote out POWPOW. Brittany doesn’t want to be singled out she wants to vote with the house, “I can’t change everyone’s mind so if 12 people vote her out it’s not going to matter.

Zach and Frankie join them chit chat.. Brittany tells them she was in teh ying yang twins video whisper

10:13pm Hayden and Nicole
Hayden he says nothing against religion he feels like everyone else in there is religious in the house, ‘I’ve never even met anyone who reads the bible
Nicole – “I don’t know anyone either that carries it and reads it”
Nicole adds that usually theres a couple people each year but this year it’s everyone. .
They head in the the honeycomb room
Nicole says she was talking to Christine and the plan is to have Christine talk to hayden so Nicole doesn’t. this way it doesn’t arouse suspicions because if Christine is talking to him people won’t think anything of it.
They agree Caleb is in love with Amber, Hayden – ‘It’s kinda weird”
She tells him people are starting to talk more game. Cody has been talking game to her more. They both confirm they will be voting out Joey.
Nicole – “People do not think I have any game” Nicole says Amber is going around telling Victoria that Nicole has no game she’s in “LALA land”
Hayden says Joey has lost it. Nicole whispers “Do you think she’s going through Alcohol withdrawal” Hayden reminds her they are on camera.
Nicole – “Oh my god.. I’m just kidding.. I’m just kidding.. I hope they don’t clip that out now.. I’m freaking out I’m going to cry”
Hayden tell her not to worry she’s not going to get a bad cut she’s the sweetheart
Hayden – you know what I think we should do
Nicole – Play up a fight
Hayden says he doesn’t’ think they should talk anymore from here on in. It’s too dangerous for their games.
Nicole – But you don’t mean it.. you secretly do.. you just want an excuse
Hayden – It’s over.. I’m not taking you to prom
Nicole – I know I’m going stag.. I dont’ want a prom
Hayden – I don’t either.
Nicole still worried about bringing up Joey and Alcohol withdrawal she says Frankie said the same thing in front of a group
Nicole doesn’t like this idea of them not talking anymore. She says she knows they are here to play a game for 500 thousands but she still want them to be nice
Hayden – “I do like you a lot you are awesome but this will be good .. i’m not going to be mean to you “
Hayden – don’t worry about it I will protect you I won’t be mean to you
Hayden – “I’ll take you on a date after the show”
Nicole – OK
Nicole – “Are we still working together than.. obviously I’m not going to put you up do I have to worry if you win HOH you’ll put me up
Hayden – “no never”
They hug and she leaves.. on her way out he waves goodbye. 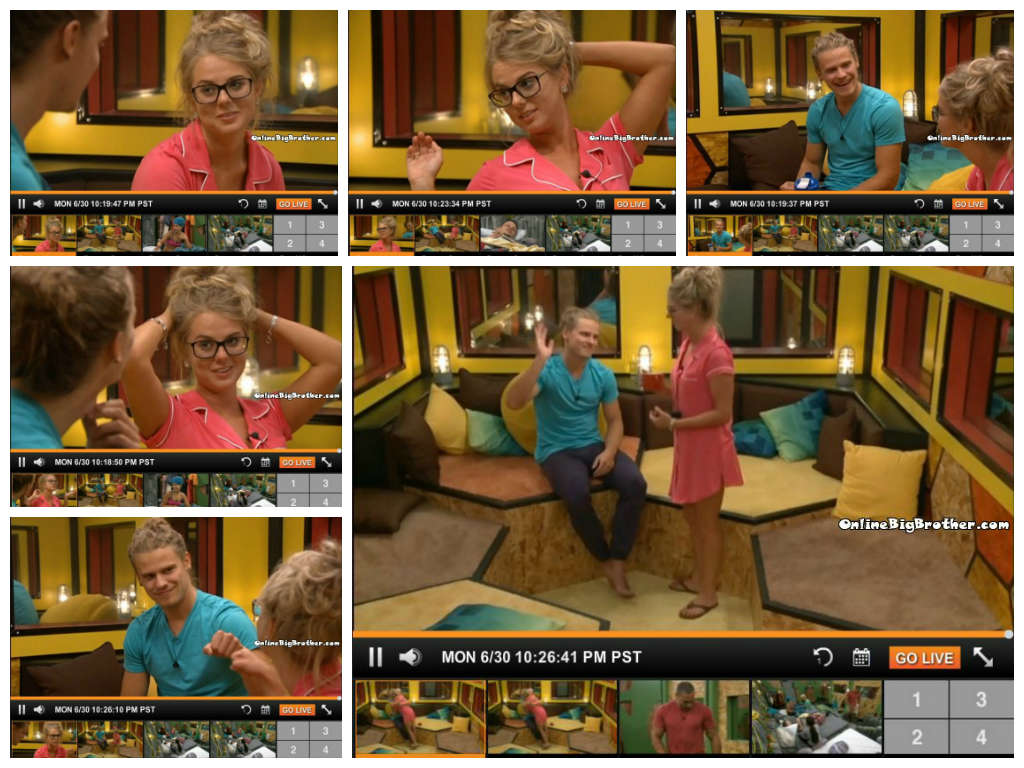 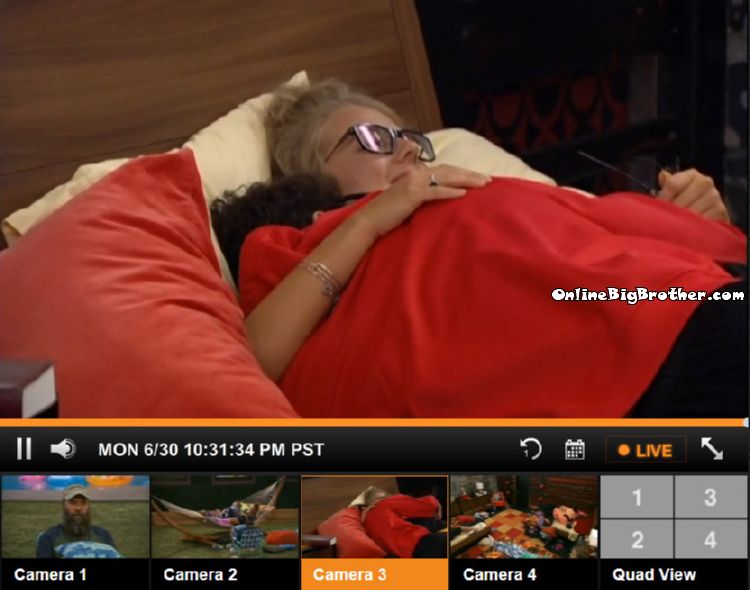 10:30pm Nicole says she’s missing her family. Cody moves in to give her a hug. 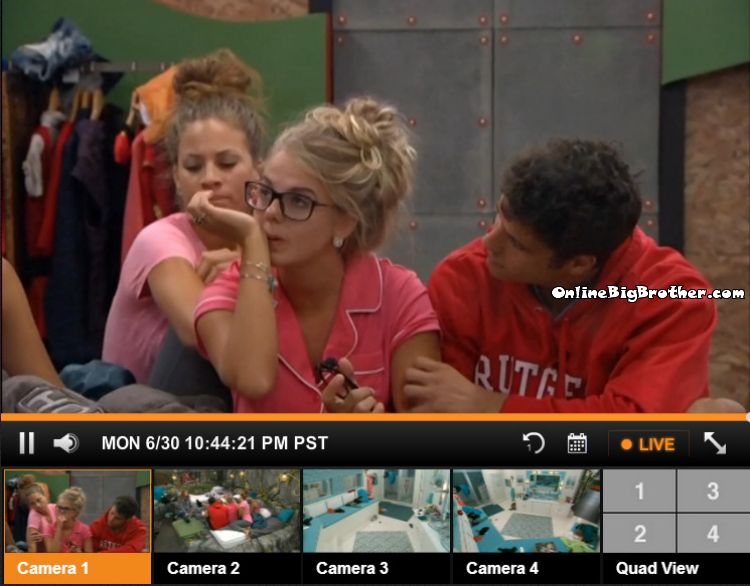 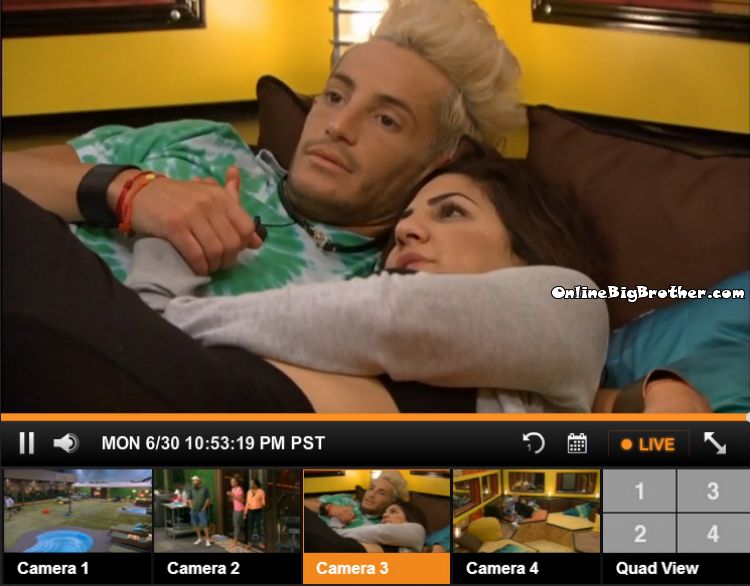 10:52pm Honeycomb Victoria and Frankie
Frankie and Victoria think Joey is leaving. Frankie asks her how close she is to POW. Victoria calls POW a sweetie says they are closer.
They agree POWPOW is a super weak player.
Victoria – “I want to create a showmance between people”
Frankie does to says Nicole is now a mess, Caleb and Amber aren’t together, “Jocasta is screaming”
they go out to find out why.

what did Nicole say? She say something racist?

She questions if Joey is having Alcohol withdrawal apparently Frankie also said it to a group of people.

You know the problem with BBAD too many commercial .

So true seems like the commercials are like 5 min every 15 min.
I miss it that’s it’s not on Showtime anymore and now it’s only 2 hours

You might try DVR ing the show…I wash dishes or something for 1/2 hour then watch the show your recording from the beginning, speeding through commercials! That’s my fix for the commercial problems…if I see Jenny McCarthys smug electronic cigarette smoking face one more time! Grrrrrrrrrr…

It has nothing to do with alcohol withdrawal. She just knows absolutely jack about the game, is a first week havenot, which ruins opportunity to create strong bonds. Her only ally is also clueless about the game, not a good social player either. All of this, plus DR seems to not really care to have to recast the vote, probably so they can have a more popular star voted with Frankie and Donny/Caleb.

DR has groomed equally-bad or worse players to say the right things in the past. All they would need to do is coach her on how to use AT as a bargaining chip. Too late now.

Strange that BB recruited Joey from her job as a barista here in Seattle! You need people who understand the game, don’t play too hard right off the start, and are prepared for a few months of mental,emotional stress. I think Donny is the kind of player they need more of.

Nicole is so hot, she’s like my nerd queen.

First the good news, Caleb is over Amber,finally.
The bad news ? He is now in love with Brittany.
(Run Brittany,run!!!)

When i 1st saw Caleb,thought to myself,good looking southern boy,girls will love him.
Boy was i wrong LOL
(Now we all know why he is still single) #Creepy

So in order to prevent a “racist cast” disaster like last year they cast super religious people this time around. Haha. Imagine the blow up (inside and outside the house) when one of them starts swearing on the bible and then going back to their word. I think that would be how the fans would remember this season. Best case scenario, Jocasta doing that. :))))))

religious people can be some of the most racist people especially in the deep south ..

Carlos’ they swear on Mothers, Fathers, children, every year…this game is all about the deception,laying low, making one great alliance of 3!!! Or less, and getting info back to your people…haven’t seen swearing on the bible, but if it was done, Dr. Will, the greatest player ever! Did it!

Victoria needs to STOP smacking her lips when she eats. Disgusting!

It’s the small things like smacking lips that drive you nuts by September! I wish somebody would clean the damn house…driving me crazy to see the filth!

I totally agree . Why is it on BB CAN we see them going around cleaning like BB told them they have to, but I never see it in AD or referred to in recaps for BBUS. Cuz they really need it. Can’t believe Caleb has stuff on the floor and so on when he’s been military.

That screencap of them prayin around the bed is the BEST! Its nice to see a house full of hg’s who still believe in the Lord.

I can watch Joel Osteen if I want to see meaningful prayer…I imagine all these folks are praying for is a day without slop, to stay off the block, etc. What I EXPECT from BB is some strategy, lying, cheating, accusations, etc. Let the game begin!

THIS CAST IS SO SOFT!!!!!!!!!!! FEEL LIKE IM WATCHING BIBLE CAMP OR A FUNNERAL ALWAYS SOMEONE CRYING!!

DO VICTORIA AND FRANKIE HAVE A SHOWMANCE????!!!!

So is Hayden moving on to pursue other women in the house or does he still really like Nicole and is just keeping the “showmance” out of the deal and hiding their “friendship” so they can both go further in the game?

Is there a reason people can’t watch the videos of these moments?