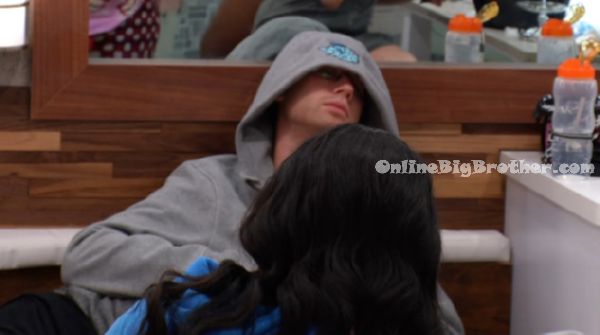 8:45am Big Brother wakes up the house guests. They’re all complaining that they didn’t get enough time to sleep. The tv screens in the living room say power of veto ceremony today. In the bedroom – Sarah is not feeling well. The others say that she’s not feeling well because she’s on slop and had exerted a lot of energy yesterday with the power of veto competition in addition to not getting much sleep. Arlie was rubbing her back talking to her trying to make her feel better. He then got Sabrina to sit with Sarah and he went out into the living room and stood in front of one of the camera and started freaking out at big brother to get Sarah the medication she needs. The other house guests tell Arlie to calm down and to stop. Sabrina says that Arlie shouldn’t be yelling and swearing at big brother. Paul agrees that no one should have to wait for medication. He says its stupid for people to have to wait an hour for gravol medication when its not a prescribed medication. Big Brother then blocks the feeds. 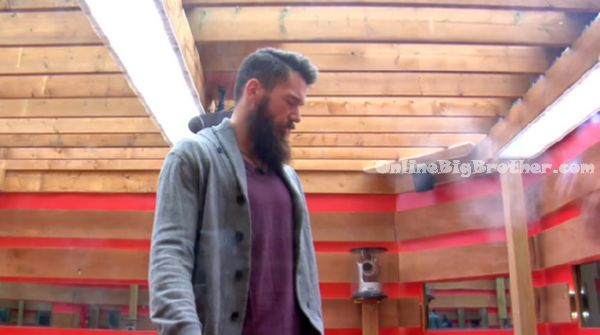 9:35am – 9:45am When the live feeds come back – Arlie and Sabrina are up in the HOH room talking. Sabrina is telling Arlie that she firmly believe you shouldn’t slap the hand that feeds you. Arlie agrees but says that he wasn’t really losing it. Arlie says that when he was really sick and needed medication Sarah freaked the f**K out for them to give him medicaition and 5 minutes later I got it. Arlie says so they should us if you freak out, then you get medication. Sabrina says that she knows his intentions were good it just wasn’t the right way to go about it. 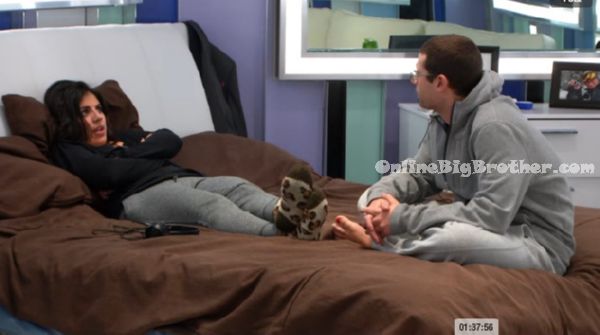 9:50am – 10:05am Jon, Kenny and Arlie talk on the second level near the front door. Kenny wonders what he should say during the veto. Jon tells him to say that he is using it on Paul because he was never the target and that the last few days showed that. (The plan is for Kenny to take NEDA off the block and for Andrew to nominate Kyle for eviction.) Arlie realizes that if he puts his ear to the floor he can hear Andrew in the diary room. He says he can hear every word – word for word. Big Brother tells Arlie to stop that. When Andrew comes out of the diary room Arlie tells him they could hear him. Andrew says well that f**King sucks! Mind your own f**king business! Kenny and Andrew head out to smoke again. They talk about being able to hear diary room conversations. They’re getting annoyed with Arlie. Andrew says that he apologized to big brother for how Arlie was behaving.

10:25am Out in the backyard – Kyle, Adel and Paul are talking. Adel and Kyle are pissed at Paul for throwing them under the bus. Adel says I am not in this game, I don’t care any more. Just talk real with us! If you want to talk game then go in the house and start playing the game. Kyle is resigned to the fact that he is going up and going home. Adel says I need you to be a man and stop moping around like an old man to get extra votes for another week. Just be real with us.

10:40am Meanwhile in the bathroom – Rachelle is going to the bathroom while talking to Ika about how much they dislike Heather. They talk about how fake Heather is and how they can’t stand her. They’re worried about Heather telling the guys information. Ika says we’ll just lie and say it isn’t true. They head into the bedroom. Neda is worried after her diary room session that she thinks Kenny might take Paul off and put up Kyle. Big Brother blocks the feeds again..

12:30pm Cams 1 – 4 are still blocked for the POV ceremony but the War room is showing the 3 eating their lunch and getting ready for the day. 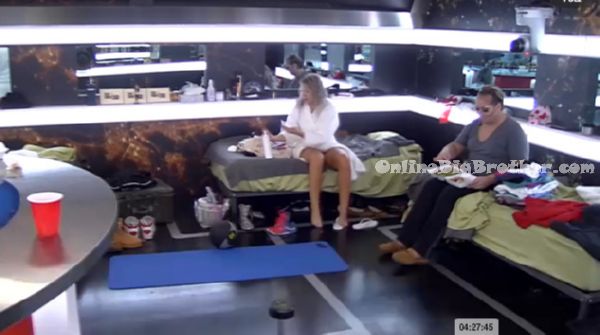 I cant tell if Arlie is mentally unstable or he is just that good of a bullsh*tter.

I’m kinda starting to respect Sabrina’s place in this game…people seem keen to talk to her and tell her things. I don’t know if her emotional thing is strategy but if she wants to keep doing that with the guys she’ll have to pull out a pov win (don’t know about hoh just yet) so she won’t come off as completely useless and dispensable

Adel keeps saying he doesn’t want to be there anymore, that he is done with the game. So why is he still there? There are 3 people in the war room that want desperately to play the game. Are Kyle and Adel just going to whine about it and stir the pot for no game benefit until they get evicted? They should have put Nate in the game from day one and Adel in the secret room.

Anyone but Nate lol

I don’t understand why they don’t have non-prescription meds hidden away… are they worried people will overdose on Advil and gravol and stuff?

Why do they need non-prescription meds at all?? Lots of people don’t pop pills for every little headache or upset stomach.

no but some people that feel ill like to pop a gravol right away so it kicks in and they can stop feeling light headed/dizzy.

I am still on the fence with so many of these houseguests.

A lot of these house-guests are really annoying and in my opinion disrespectful of Big Brother. It’s a slap in the face to me since I even auditioned and these are the people that were chosen to be on the show. It’s kind of embarrassing for Big Brother Canada. I know some people see it as entertainment, but it’s getting kinda sad. I won’t list my least liked list, but I do like Sarah, Kenny, Ika, Jon, Neda (and I really hope Allison gets to enter the house).

i find adel and kyle funny lol telling paul dont talk freaking game to them …. these guys are a mess i like kyle but his mistake is letting people know he was going after kenny and jon bad move …

Definitely dumb (adel) and dumber (Kyle) along with Paul are good comic relief..

We watch the show and most of us say we would love to go on the show, but the fact of the matter is…. it is alot harder than we can imagine.
Only people I see having an easy time with this is people that aren’t close to their family and circle of friends. You go in there not missing anyone and not worrying about what you are missing in the outside world.

Between that and the wole slop thing (I need FOOD) I don’t think I would ever be a good houseguest.

I don’t know. Winning is hard, but Final 4 I don’t think is too hard. BB is a poker game with real people and no cards, but the way the play is just the same as sitting at a table. This strategy of get in early start making alliances and make wave, is always going to fail miserably. Paul, Adel, and Kyle all made the mistake. Kyle and Adel shouldn’t have hooked their trailers up to Paul, Paul shoulda kept his mouth shut. He is to BB CAN, what Ronnie was to BB US season 11. Too much too early, and everyone knows how he is now so he is the black plague now. This game is simply be overly social, be trusted, stay low until final 6. Get in and find ONE person you can trust, and trust you, make a final two, then join sperate alliances and share info quickly without getting caught. Dr. Will and Mike, Danielle and Jason, all have played perfect games before. This game isn’t rocket science, but so many miss the mark out of fear or over anxiety. That’s why the old US versions are fantastic, and the later ones are horrible.

Meaning, you either get some alliances that are too powerful, or players who are too meek to exchange info.

The hardest part of the game is this, to win, you have to stir up as little shit as possible and be on decent terms with at least enough people that no matter who is in power you’re not in danger. The hard part is not arguing ro fighting or coming across theatenting (looks, relationship, being too “big”) and not winning on purpose despite being bored out of your mind. The best way to win is still to do as little as possible, the hard part is being content with staring at walls and doing nothing and being left out of all the scheming and gossip.

Someone like a Jordan can always make it far because they do very little and make almost no waves. And someone like mike boogey or janelle who is always scheming will struggle to win the game unless all chips fall into place. People get bored and talk and next thin you know your plan is house wide. Its very tough to win if you are going in there scheming from day one, these people are usually gone in the first 2-4 weeks and tend to be the more intereting characters. It would be nice if they did a season with just those types like the ronnies and janelle types and the players whose big personalities get them booted in the first 2-4 weeks all back.

I think I could win BB but I don’t know if out of boredom I would just start shit talking and scheming from lack of things to do.