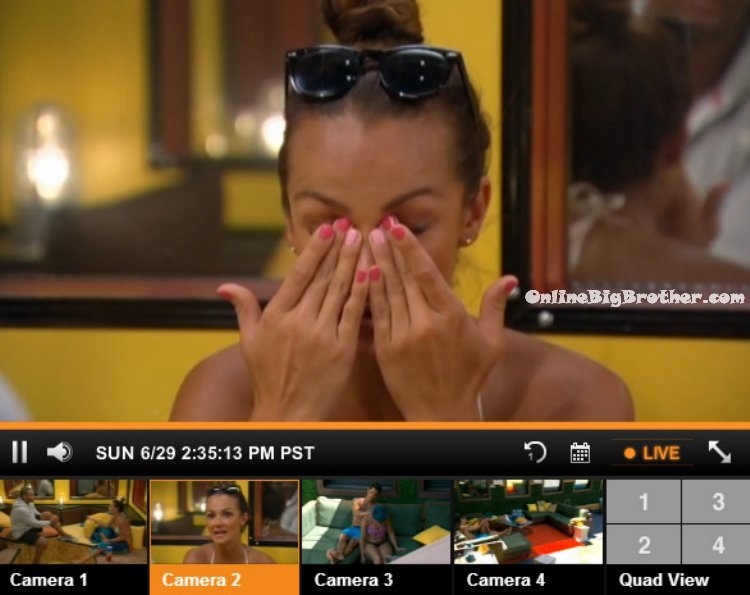 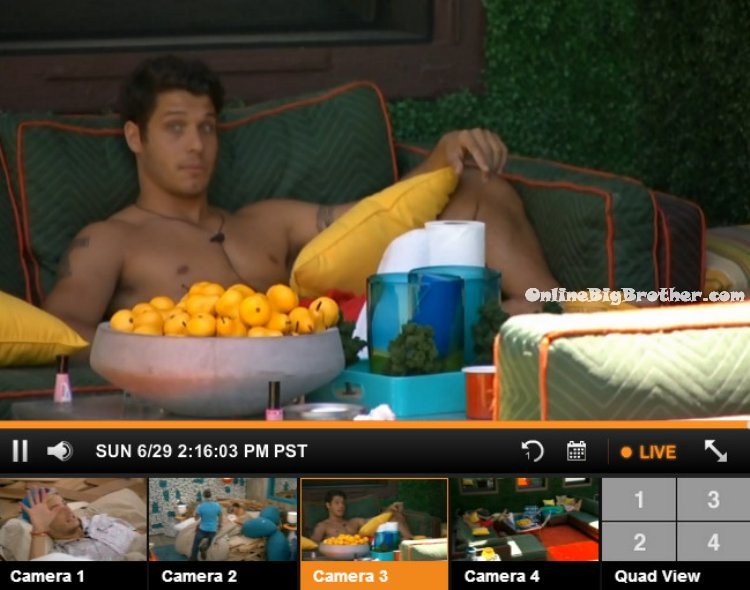 2:20pm Derrick and Cody talk on the backyard couches. Derrick says that’s the thing with winning HOH, you draw the line with people by putting them up. They’re like I thought we were cool. Cody says its just better not winning HOH right now. Derrick agrees. Cody says that if Devin goes up on the block, I will vote him out. Cody says I would like to win HOH to be safe and avoid the back door. Cody says but this early in the game, if you take a shot at someone you can’t miss. Derrick agrees. Cody says it would solidify our spot with the other side of the house too. Like damn look what he just did, I’m not putting him up. Derrick says we’re going to do this, we’re going to do this kid! Over by the couches – Cody gives Joey a back massage. 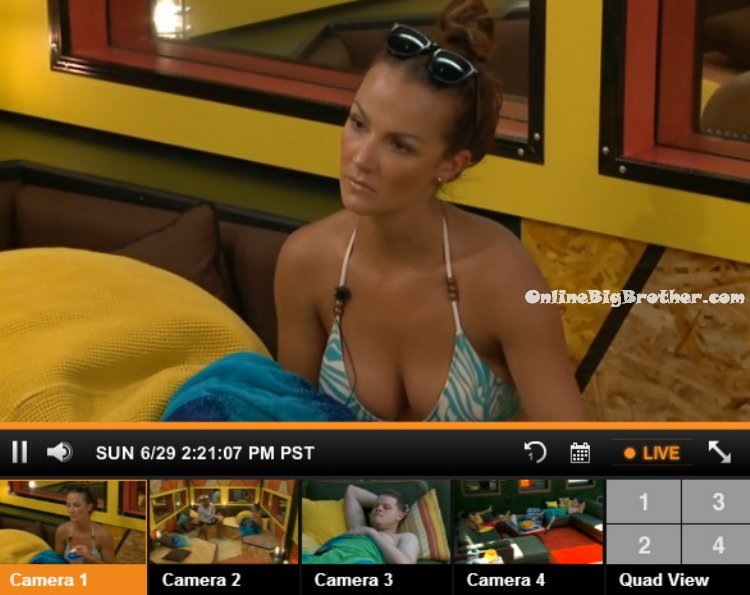 2:25pm – 2:55pm In the hove room – Devin apologizes to Brittany and tells her he is sorry for last night. He says that he doesn’t want his daughter to grow up and see her father in a negative light. Last night it broke my heart. I mean 100% as a father I would be elated to see you or another parent to be sitting in that seat at the end. Devin tells Brittany that he told Joey that he doesn’t want to vote out Joey. I like her and not because of the laughter. I like her because she is my type. I told her that she has my vote. I know that you and Joey are close. Brittany says I want to stop you and talk about us first. When you were talking to me you just shut down. In the beginning I told everyone that you were an amazing person. When you came in here it wasn’t about the lotion. Out in the backyard I was just being honest with you. You and Joey are the only people that had issues with people. You blew me off. How you talked to me took me back to a place I don’t want to remember. You made me feel like an idiot. Honestly if it was between you and Pow, I would have voted for her. Me being honest with Caleb put me in a bad position. I am probably going home next week. Devin says coming into this the last time I saw my daughter face to face was over 3 months ago. Devin starts crying. He says he values his time with his daughter and loves her so much. He says that he moved away from her to San Antonio for work. He says that he did a face time with her before coming out here and being in the house away from here is really hard. Brittany says that she gets it and that she understands yesterday was a bad day for him being his daughters birthday. Brittany starts to cry. Brittany says we’re all just starting to get to know each other. There aren’t lines drawn in the sand yet. Devin talks about how Donny told him he doesn’t get love at home like he’s gotten in the house. Devin says he told Donny he trusts who he says he is 95% but that 5% of him doesn’t think he is who he says he is. Devin says Donny told me he is who he says he is and if I’m not who I say I am he would still love me. Devin tells Brittany that he told Joey he would vote for her to stay. Devin says I promised her my vote and I don’t want to go back on it. I just hope I’m not the solo vote. Brittany says I don’t think you’ll be the only one.. 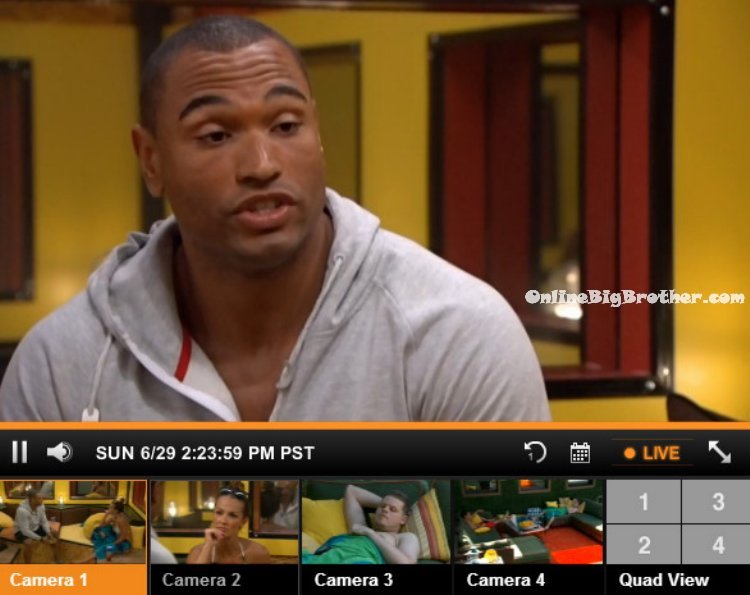 I just hope donny lasts a long time. he seems like a very nice guy. caleb and zach and frankie beed to be the next 3 out!

Hey Devin how about Joey stays in the house and you self evict ?

Call me heartless, but I’m not putting up with Devin and his sob story about his daughter all summer. It’s gotten old real quick and we’re not even at the first eviction yet.

Simon or Dawg- the tv nutters site seems to be glitching and the ustream site hasn’t been working-is there a back-up site?

🙁 those are usually the backups

kudos Dawg! For the screen shot of Brittany.

Boo hoo waa waa. Devin misses his kid. Didn’t he know that he wouldn’t see her for months when he agreed to be on the show? So far every time he has been called out for behaviour he blames it on missing his kid. I would respect him more if he just owned it and apologized and learned from it. Derrick left a kid at home too and you don’t see him or Jocasta or even Brittney crying about missing their kids this early in the game. I hate it when players use the parent card to gain sympathy. They knew what they signed on for so suck it up or leave.

Devin had to “give up” baseball because they put him in residential Treatment for 6 months…. & the last time he was on any teams fram team(never majors ) was 9 years ago…about 8 yers before his daughter was born

Dads who truly love their kids do NOT move away from them for work. They figure out a way to stay near. I think he’s full of it.

Devin is officially Out Of Control!

I am officially over Devin. I thought I would like him at first but he’s just too much. He calls the women emotional players, but he’s the one that seems to be battling hormonal issues most of the time.

I may be the only one here, but I actually like Frankie. Sue me. And not for his sister. I don’t even like her. But he’s such an entertainer and so hilarious to me! I hope he stays a while. Definitely not a boring time with him around. He’s playing a good game so far.

I wonder why Donny doesn’t get much love in his hometown? Being from a small, southern town myself, a guy like him should be well liked in his community. Maybe he is a loner and/or doesn’t have many friends. I dunno, but if he really is the guy he appears to be (and not some secret weirdo) then I’m rooting for him to go far in this game. More so for the fact that the experience seems to be one he is enjoying, meeting new people and such. Everyone wants to win, but the BB experience seems like it will have a bigger impact on Donny’s life than money.