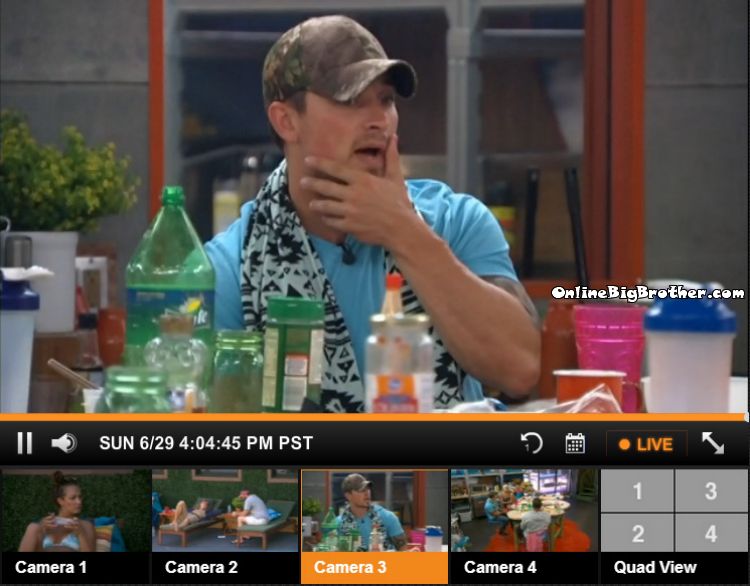 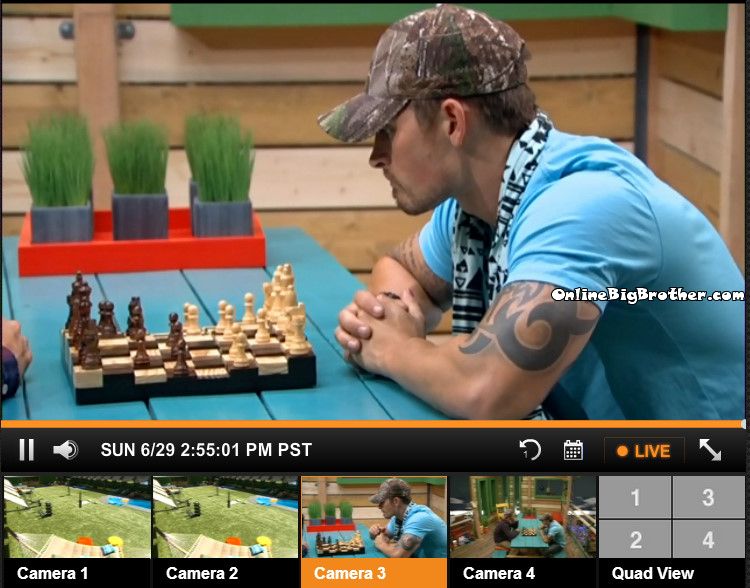 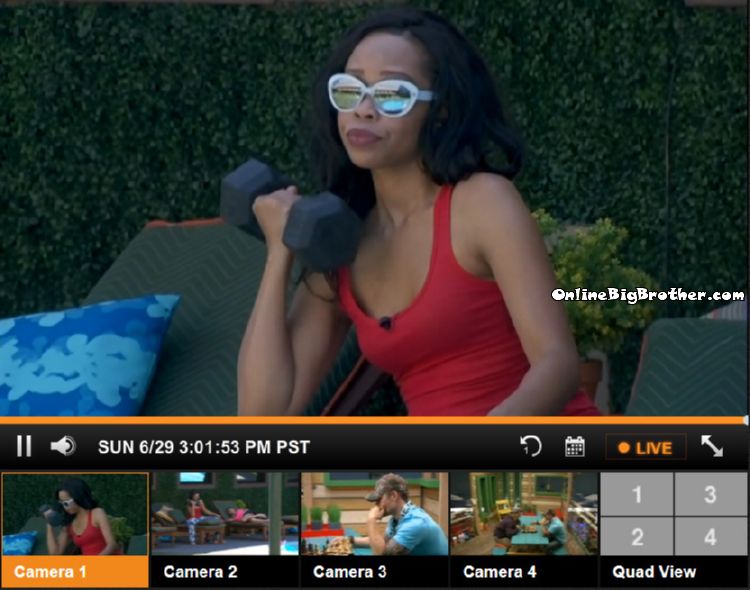 3:05pm POWPOW and Jocasta Chit Chat these two seem to have built a relationship together. Jocasta is working out in her jeans, POWPOW has the Bow Tie on. Brittany joins them 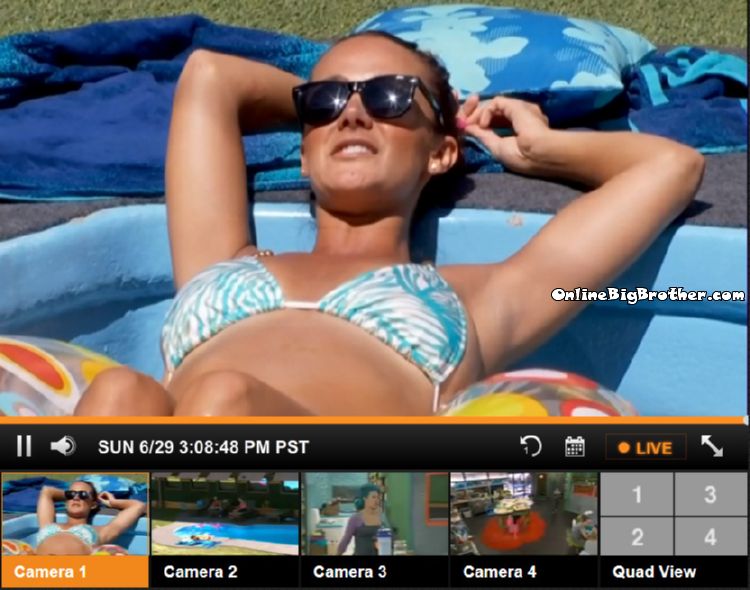 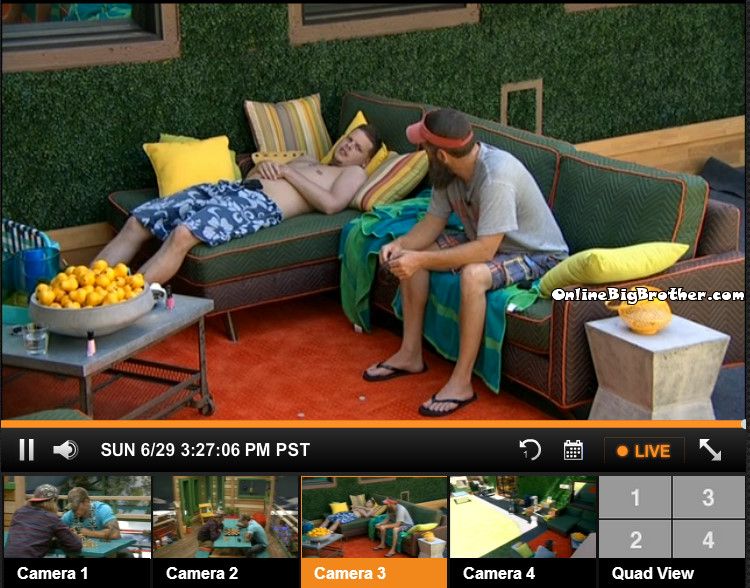 Donny is pointing out how Christine has been hanging out a lot with the guys.
Donny says there is a majority in the house but ‘They” are trying to make it not look that way”
Derrick says it’s early in the game the just have to go with the hand they are dealt depends on who won HOH will change the entire outcome.
Donny wonders if a close friend wins it again if the targets will be the same.
Derrick thinks it will be like this week the person falling off the HOH will be the nominee.
Donny _ “Unless it’s their friend that falls off girts”
Derrick – “Ya” 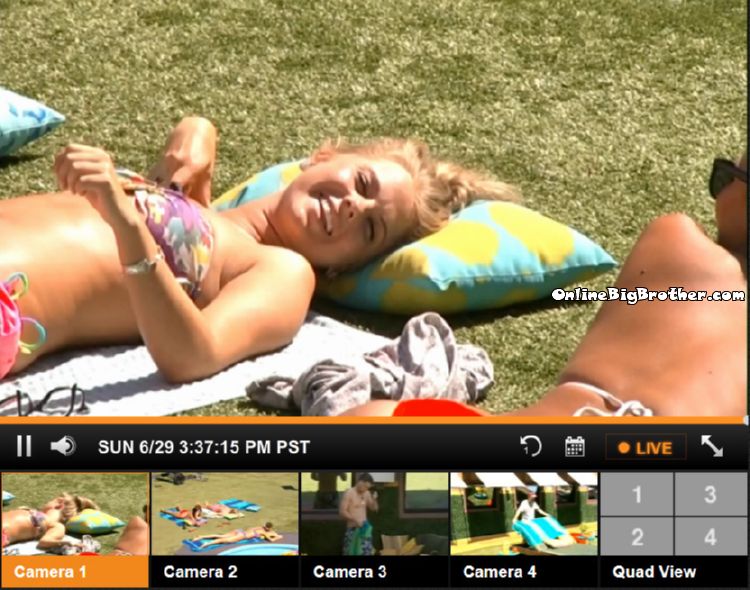 3:34pm Cam 1 suntanning Brittany and Nicole
Brittany saying she wants to win the money for her mom. She’s really poor, “Doesn’t even have a car”
Brittany – “My mom has a lot of regrets that she’s trying to make up for.. ”
Brittany wants to help out her parents they’ve been so supportive of her.
Brittany says her kids dad was able to take a large part of the summer off to be with the children this summer. The rest of the time her mother is looking after the kids
Amber joins them. they start talking about how bad they feel for having to vote someone out they like everyone. 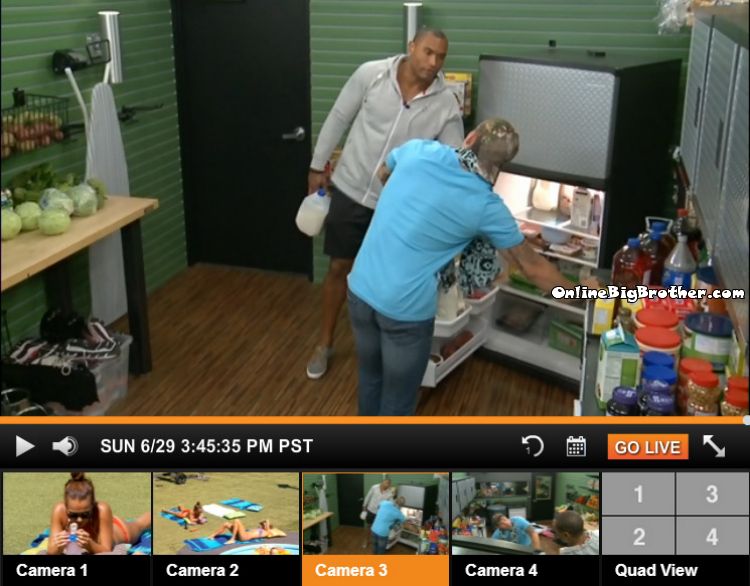 3:46pm Storage room Devin and Caleb
Devin says he told Joey he wants to be silent  allies and he;s going to give her his vote as long as she goes around the house and cleans up the mess she made, “Going around talking crap about me to people Devin adds that Joey is gone anyways by doing this they get her to do all the clean up work. Devin says after they vote her up she won’t know who voted for her and who didn’t. Meanwhile she’s be walking around the house saying “Devin is a great guy great guy great guy” Caleb – “The last thing we want is for her to get votes” 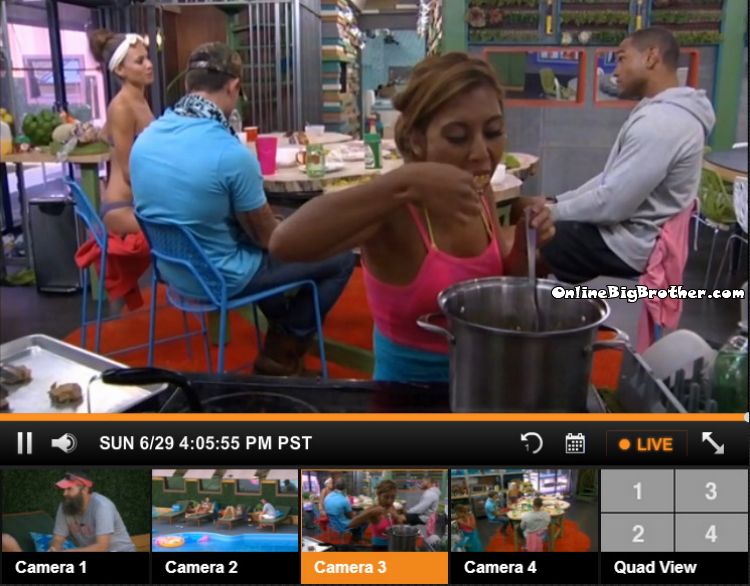 4:05pm Kitchen Amber Devine and Caleb
Caleb trying to determine how close Amber is to him, She says she’s east of nashville After some calculations he determines she’s about 3 hours away drive maybe 2 and a half hours. Amber mentions about a long distance relationship she had for 2 years the guy lived 5.5 hours away. “I kinda got better I was able to save 1 hour off”
(LOL Amber is sinking her teeth in Caleb it’s epic)
Caleb starts talking about having a “decent truck for a kid my age.. all the girls wanted to ride in my truck”
Caleb – “I don’t even like new cars I like old classic I like a old 67 chevy”
Amber – “Yeah.. So you can drive a tractor”
Caleb “Yeah I can drive a tractor.. combine tractor..”
They start talking about their vehicles they own. Amber says she use to own a G35. Joey joins them says she has a infiniti g37.
Caleb says new trucks are screwing with all their “Electronics” he thinks the best vehicle are older diesel.

Did anyone notice Caleb is wearing Amber’s dress around his neck. Again I say creepy stalker!!

It’s not stalking if they are in the same house…
And I think it’s obvious that Amber likes him or at least is tricking him into believing that she does. Either way she’s still leading him on

How is showing she likes him or leading him on? Hayden is the guy she hangs out with the most. Everyone has told her that Caleb REALLY likes her but she hasn’t said she likes him more then just a friend. He’s already talking about them getting married!! And it is stalking if he has to know where she is and who she’s talking with every moment…not for game play but because he wants her. He even said he knows what she thinking and yet they spend almost no time together.

Every time I look at Caleb, Sabertooth of XMen and Wolverine comes to mind

Please do not insult Wolverine!!

Forgot to add the word fame. He doesn’t remind me of Wolverine. His nemesis, Sabertooth, is who comes to mind.

Devin is an IDIOT

I was rooting for him going into the house. What a huge disappointment.

After seeing this episode tonight Devin is officially my least favorite cast member now…..what an idiot!

Apparently he’s been told he resembles The Rock and he really thinks he is that hot, even doing the eyebrow things that The Rock does. Sorry Devin, you are NOT that hot and you are NOT Dwayne Johnson!

I swear Nicole is actually one of the funniest in the house. I wasn’t a big Christine fan at first, but I’m loving this nerd girl alliance. Do I think they have the skill to go to the end? No, at least not from what I’ve seen. But I hope we see more of Nicole at least and she comes out of her shell a bit more.