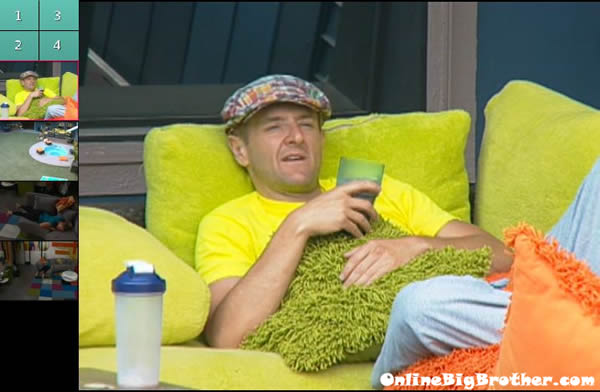 7am Boogie wakes up and goes to the kitchen and then heads out into the backyard. Boogie comments to the camera that while we have fun, he will be in here doing work. Boogie talks about how Wil has copped an attitude this week. Boogie says that Wil said that it is Frank’s HOH but I am doing the talking, Boogie says do you know who I am? Fu*king right I am doing the talking dog. Boogie starts talking about Janelle and says that she should not have come at him. Boogie says that she played sloppy this year. He says sorry I wanted to play nice, but it probably didn’t help sending Janelle home. Boogie says that he did a good thing because now Janelle will have all summer to talk to the fans. On another camera you can see Ashley slowly walk out of the bedroom and lay face down onto the living room couch. 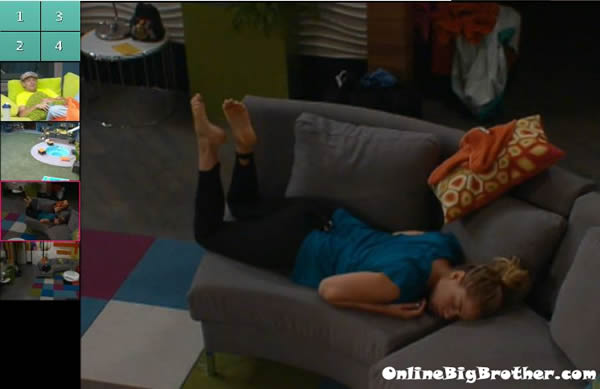 Boogie starts talking about Wil again, saying that he has done too much talking; now he is starting to think that he knows a little too much. Boogie says that when people get to know too much and wear it on their sleeve they get shown the door. Boogie says that Joe could use a few friends in here and that could help us. He says that the Power of Veto hasn’t been played yet, so who knows. He says that maybe it’s cocky of him to act like the HOH is mine but I have been loyal to Frank. Boogie says that he wishes the internet could talk to him. He says that he tries to read our minds and how the edited product of BB is so great. Boogie says that he wonders why they are not on an indoor lockdown so that they can set up the backyard for the POV. He wonders if it might be a night time POV. Boogie heads inside. 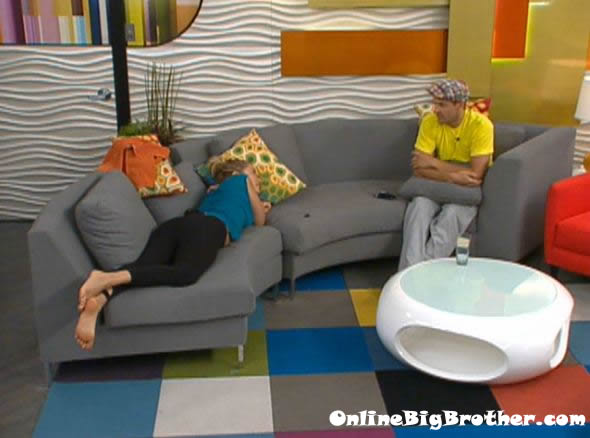 8am – 8:30am Big Brother wakes up the house guests. Boogie heads into the living room. Ashley tells him that she has an awkward feeling because she is waiting for the Advil to kick in. She says her back pain is getting better. Boogie tells her she has to get better and win a competition or two. He says that if she doesn’t people will start to think. Boogie tells her to win an HOH competition by hitting a buzzer. Boogie tells her that it is weird they aren’t setting up in the backyard yet for the POV. Boogie asks her if she feels like she isn’t even playing the game. She says that she has never been in so much pain. Boogie says that he wonders why BB hasn’t taken her for an x-ray like early in the morning when no one else is up. Big Brother cuts the feeds. Ashley says that she wishes there was something else she could do. She says that the muscle relaxers don’t do anything for her at all. Boogie mentions to her that she should try Franks HOH bath. Ashley wishes they would give her more cortisone shots and says that she will worry about the consequences later. 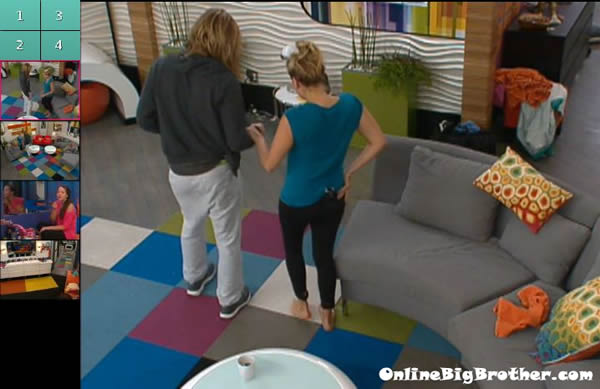 9am Wil was up and made breakfast and then heads back to bed. Danielle puts on her make-up and then heads into the kitchen to make breakfast. Ashley goes to the bathroom to shower and get ready for the day. Frank joins Danielle in the kitchen. Frank asks Danielle if it was better sleeping on the floor in the have-not room. Danielle says that it was way better. Frank says that probably not a lot of viewers know that he is out of his spirit-tard. Danielle tells him that he did good in it. Ashley asks about the spirit-tard. Frank says that last night they had him do one more spirit-tard diary room session. Big Brother cuts the feeds. Ashley starts asks him about when he got out of the spirit-tard. He starts to talk and then Big Brother cuts the feeds. When they come back Frank tells her that she got him in trouble again. He says I should have put you on the block. Just kidding Ash. 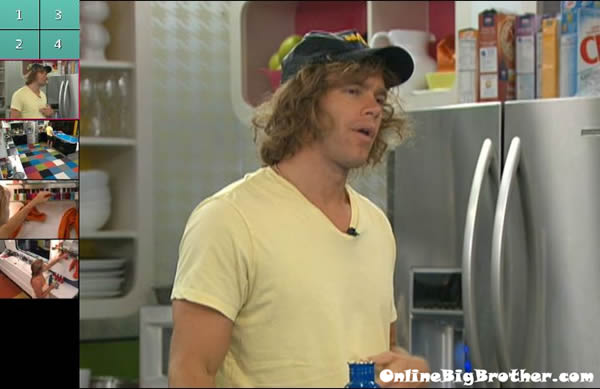 9:51am – 10:15am Big Brother Live Feeds LEAK – Big Brother then quickly switches the feeds to the backyard which is locked down and you can see the construction crew building the Power of Veto competition for today. Any guesses on what the competition will be?? Tell us what you think! 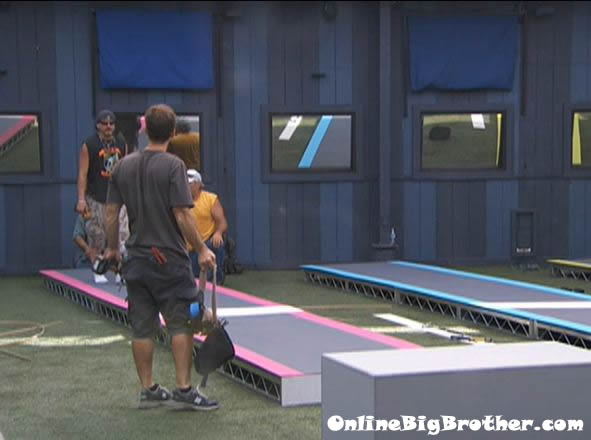 11am Joe makes up a pot of slop. Britney joins them and then talk about how uncomfortable the have-not beds are. Shane tries to eat the slop but stops part way through and says he can’t finish it. Jenn and Boogie join them in the kitchen. They talk about random things, Joe asks Boogie questions about his restaurant. Joe tells them about how he left early from his restaurant and came by just after 10pm and all the lights were off. He says he fired the manager and told him if he wanted to go drink so bad now he can. Boogie says his line is well now you have all the free time in the world. 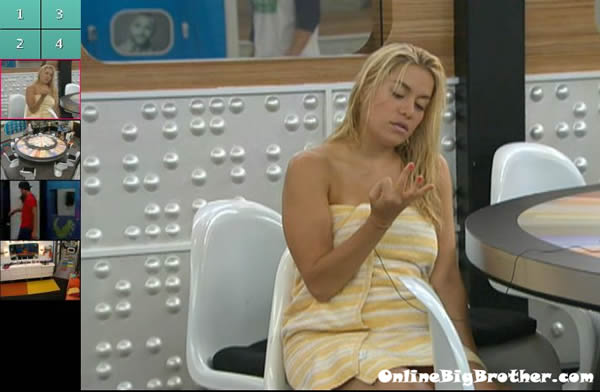 I hate Bitchy Boogie.. I wish that the quick pack would keep Wil and get rid of Joe. They could use Wil to go after Boogie and will. I also wish that the newbies would grow a pair and stop letting the vets run their HOH week.

I love this site! I discovered it last year for season 13 and it has forever changed my view on BB. If Ashley doesn’t get better soon I can’t imagine the producers letting her to continue to play because of the liability alone. Chilltown 3.0 is definitely the most entertaining part of this season but I fear they will be gone soon if the house turns on them. Thanks again for creating this site, makes the show even better!

It’s going to be a puzzle

@bbsuper, I agree physical and mental, run back and forth establish puzzle/ words something like that. The havenot comp was very physical so I would say you guessed correctly.

boogie= lucifer’s greatest creation boogie acts like he’s some icon some type of political giant he acts like he already won the game … i want will gone lastnight telling danille he doesnt want to be blindside but just tell him how she is voting … i dont understand why should anyone give u heads up on how they are voting when u didnt do the same for janelle …….

Probably Ian has advantage in puzzle.

Suspect you are good with puzzles. Am I right?

If I was contestant, and yes I got advantage in puzzles. I also in physical type as well in hanging on.

boogie always basking in his glory . he’s always tooting his own horn i would love to see his ego deflate a bit

get it done boogie! it IS your HOH, goodness.

god i only liked 2 people left int his house now. the rest are shit!

I think the reasons boogie wants wil gone is what is going to get dan and brit to keep him. They need someone in the house to win hoh that will get rid of frank and boogie….

If it Puzzle. Ian has an advantage. If it physical,stamnia, or mental. Shane, Britney, Ian, Danielle, Mike Boogie, Dan or Frank has advantage.

What I gathered watching BBAD last night, the Have’s/Have’s Not Comp sounded like it involved absorbing something and wringing it out of themselves to fill a container or something.

Boogie is rocking the cashba….. Talk to em like dirt peckerhead!

To me it looks like some form of shuffleboard.
Is there a prize if we guess the comp?
Do we get to nominate the next HG’s for eviction? (That would be AWESOME!)

for anyone of my doubters, Joe will win big brother 14. He is continuing to play this game right into his hands.

boogie’s only chance is ian winning next hoh, or hes pretty much done

but what I would LOOOOOOOOOOOOOOOOOOOOOVE, is a double eviction, someone in the dan alliance like shane decides to take out boogie and nomintes him, then boogie wins pov, stays in the house, and takes that person to town.

Boogie is awesome he makes the live feeds so much more fun to watch. Sure he is cocky but he is aware and wants to put on a good show

Danielle’s Roommate Ginger Lum tweeted this : 140 characters is not enough to give y’all the simplest run down of the lies. Just know so far, NOTHING that she has said is true.

THANK YOU for posting that!
Glad her bullsh*t is getting called out by people who are in the know.

Here are some more posts from Twitter about How friends of Dani’s perceive her.
Including her make believe BF twitting she is not is his GF that he has a GF !!! .
Poor Dani needs serious help & Don’ t go blaming her father the lies are all hers.

@gingerlum “She’s crazy. And just when you think you’ve reached the bottom of her craziness, there’s a crazy underground garage”.

@winnieawright “If you strangers who don’t know Danielle think she’s crazy…….imagine what it’s like to KNOW her”.

Oh my you poor souls! I dont even know this girl and for the first time in my life I wanna kick the chit outta someone! And for the poor soul that lived with her for a year, my dear you deserve a heck of a lot more than the half million! Seriously I cannot take much more of this chick, I watch the show, BBAD and live feed and whenever she graces the screen I have to turn it off otherwise this girl is gonna cost me a fortune in new electronics day in and day out! No bf, no real friends and daddy issues, guys do this girl a favour and vote her out so she can get the help she so desperatly needs! Janelle was a saint next to this crazy lunatic!!

“Boogie says do you know who I am? Fu*king right I am doing the talking dog.” And this is why I want Dan to keep Boogie as a option to go against in final 2.Lol.Jury members don’t like arrogant people,that even when they do any game talk.They come off as threatening and bullying and this is how Boogie is.I think it’s difficult for him to behave in any other way than what I described.Kind of how it’s difficult for Britney to go one hour without complaining.Or how it’s difficult for Wil to go 30 minutes with out scratching his head as though he has fleas.Boogie isn’t like able.Dan knows more about Ian&Jenn than their own former coach(Boogie).Which is just straight up pathetic.It kind of reminds me of when Dan&Memphis were being ask questions by the jury,and the jury members realized that Memphis didn’t get to know any of the jury members.Yet Dan was friendly with everyone.Which means that Dan had a superior social game than Memphis.Anyway,that’s just my opinion.Hopefully,Boogie will continue showing the house guests,just how full of him self he is.Go Dan!Lol.

Seems like it should be some sort of puzzle. Sounds like the have/have-nots comp was reasonably physical yesterday.

Maybe travel from one end to the other to retrieve pieces then assemble the puzzle on the other side?

Not sure about that white line on the middle. Maybe they’ll have an obstacle to climb over/under or something slippery and they can’t fall off the platform.