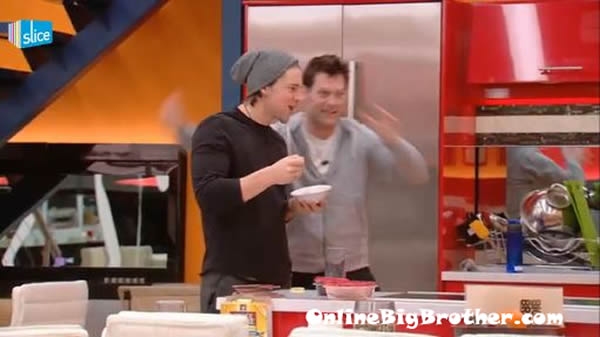 7:15am Big Brother wakes up the house guests with a loud alarm. The alarm continues over the speakers until the entire house wakes up. At 7:35am there is an announcement given to the house guests that the nomination ceremony will be in one hour. Up in the HOH room Jillian talks to Emmett about having to do the nominations so early in the morning but then realizes that she will get it over will and not have to think about it all day. Emmett tells her that the nominations she is thinking haven’t talked to her yet so it is a perfect excuse that she can nominate them and say she didn’t know where their heads were at. 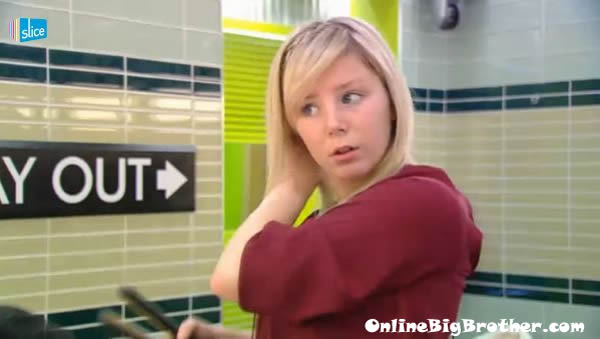 7:45am In the downstairs bathroom, Liza, Talla, Suzette and Danielle are all getting ready. Danielle comments that she is really nervous about the nominations. Suzette tells her not to worry whatever happens we still have POV. 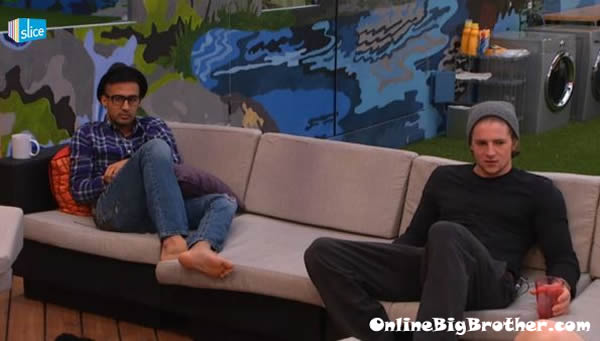 8:10am – 8:25am Jillian is talking to Emmett while he showers in the HOH bathroom. Emmett wonders if Jillian should nominate Aneal. Emmett says that every time he goes down stairs Aneal is looking at him funny. Jillian says that she can’t nominate Aneal this week she has told him too many times she won’t and thinks it would look bad if she went back on her word. Then Jillian wonders if she should nominate Aneal and Danielle. Emmett says no just go with what she was originally going to do. (Danielle & Gary) Jillian says that she is so nervous. Emmett tells her she will be fine. Jillian comments that if she wanted to she could see him naked right now. 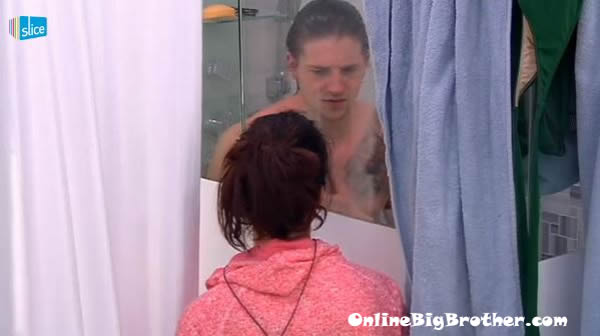 8:30amThey finish getting ready. Jillian nervously asks are we doing this? Emmett says yeah, they will probably kick us outside. Gary is going to kill me, he is going to make my life a living hell! Emmett says he (Gary) is going to love you after this week. Jillian says she (Danielle) can’t win POV. Jillian asks what would you do if I went up there and said Tom and You ..just threw you under the bus. Emmett says well the rat pack would be happy. Jillian says lets do this as they leave the HOH room. 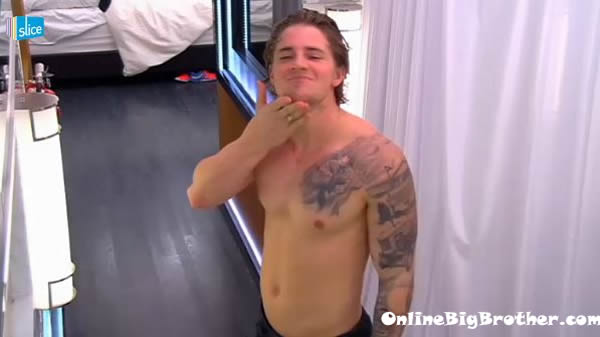 9:20am Jillian brings up Aj into the HOH room to talk to him about the nominations. Jillian tells Aj that she is putting up Gary and Danielle. Aj says that he is fine with the nominations and will vote however she wants. He tells her that if he wins the veto he will do whatever she wants him to do either keep the nominations the same or use it. Aj leaves the HOH room. Then Jillian talks to Liza. Jillian confirms her nominations and talks to Liza about having a girl alliance. They feel that they can both trust each other and Topaz. They agree to talk more about bringing another girl into their alliance later. Liza fears the guys alliance and thinks they need to let the bulls and rams drive their chariot to the top. 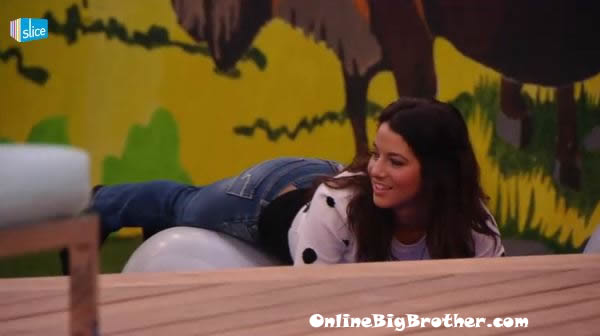 9:35am – 10am Jillian goes up to Emmett, Andrew, Liza and Peter in the backyard and decide to change the nominations to Aneal and Gary. Jillian has a real problem with not telling Aneal about being nominated before it happens. Peter continues to reassure Jillian that its best to not tell Aneal until after. Emmett tells Jillian that he will take the heat from Aneal, blame it on me. Jillian decides to put up Aneal and Gary.

10:15am – 10:35am Jillian has another conversation with Emmett in the backyard. Emmett reassures her that she is making the right choice by nominating Aneal and Gary. Emmett tells her to tell Aneal that he has been spreading lies and rumors. Emmett says that it doesn’t matter anyways the house is split after this week anyways. Emmett tells Jillian to be friendly with Danielle because you don’t want her to change the nominations. 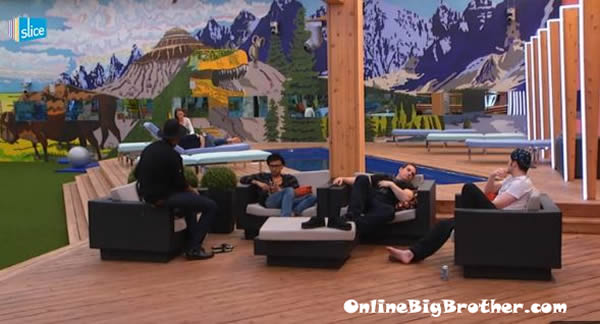 10:45am – 11am All the house guests are put on an outdoor lock down while Jillian selects her nominations (Aneal & Gary). 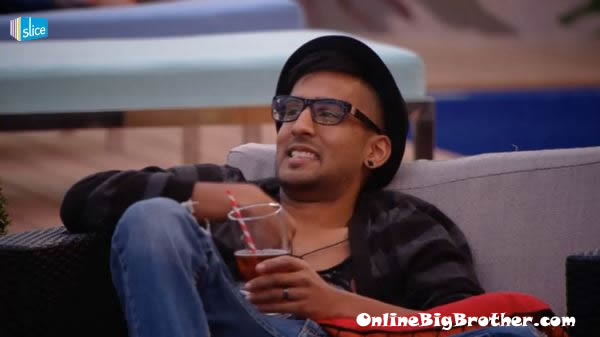 11:40pmThe house guests are still hanging out in the backyard waiting for the nomination ceremony to begin. Alec and Emmett played a game of chess. Then Andrew, Alec and Aj started hitting a ball around the yard. Big Brother then switched the live feeds to the “Hush Hush screen. The nomination ceremony has begun .. 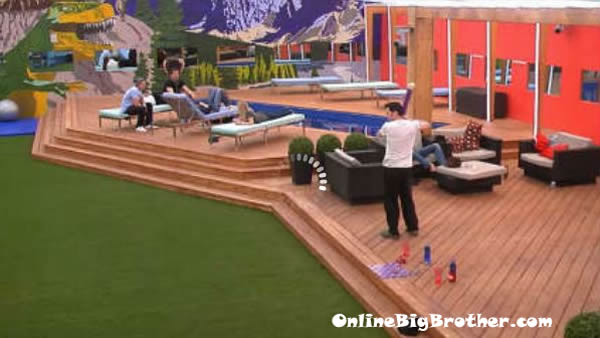 3:45pm The live feeds have now been blocked for 4 hours..

It’s sounding like they have decided to put Aneal up. I am actually liking Aneal, but he won’t go far unless he starts forming some kind of alliance. He should be rallying the misfits against the pretty people alliance. I am not buying Liza’s friendship with Jillian. It’s so obvious she can’t stand her. I didn’t think I’d like Peter, but I think he’s playing a smart game so far. He sort of reminds me of Eric from BB8. I have to say that the cast is pretty real – no fake boobs and hair extensions. I had hopes for Alec but what is he thinking hooking up with Topaz. The showmance will be his demise! The only one I really dislike is Tom. Jillian needs to stop listening to Emmett. She won, she needs to do what is best for her game, not what’s good for the 4 guys. Didn’t they watch season 12? The brigade each pulled a girl in with them as a vote and shield (Matt had the bromance with Regan), If the girls don’t wake up soon they will end up like Keisha and Britt. As for Gary and AJ, they are annoying, but not threats. I really like Talla and Topaz. I am hoping they do some damage!

im beginning to think liza is very underrated. she had good connections with EVERYBODY.

The Art of the Big BRother Canada House

No deep down Liza hates Jillian and she told Tom that Jill is her biggest competitor. I think Peter is playing a great game and he’s off everyone’s radar. Will probably get to F5 at least.

Nomination results are up