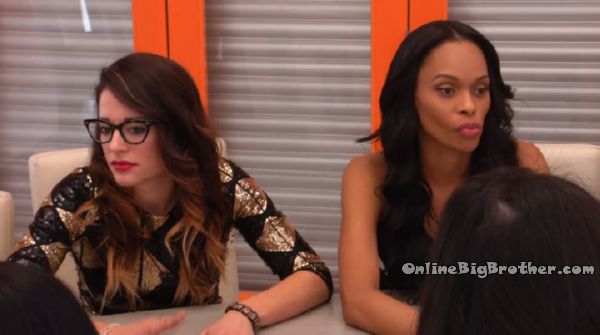 Yesterday we watched the premiere of Big Brother Canada Season 2 and found out that this year one of the twists is to have a 15th player voted into the house out of a potential 3.
Scott A drag queen, Nate the sheet metal worker and Alison psychiatric nurse are the pics. There is also a series of “Twisto Twists” which I place a curse upon.

Paul won the first HOH and proceeded to get a terrible case of HOHitus. The first 12 hours of the feeds was packed full of him making deals and talking game. Paul nominated Anick and Andrew, His reason was Anick was the first Girl to get off the ice block during the HOH competition. Andrew was the first Boy off. Andrew proceeded to win the POV and take himself off the block allowing Paul to put IKA up as the replacement nomination.

House is a knot of alliance and deals very hard to make sense. There is a boys alliance, Girls alliance and some smaller side alliance and final 2 deals. Kyle and Sabrina are in some kinda final 2 deal same with Neda and IKA. Andrew and Kyle have some sort of “Bro” alliance going on akin to Tom and Emmett last year.

Rachelle has made some enemies, Kyle especially does not like how she flirted with JOn and Kenny all while she has a boyfriend back home. Kyle also is making a big deal outta Rachelle not talking to him early in the game.

Andrew dislikes Paul for nominating him earlier in the week. It’s common to hear Andrew making fun of the way Paul talks. Paul has a tendency to say “That’s insane.. So insane bro… Bro insane .. insane”. IKA and Neda are targeting Paul but they are also cognizant of a boys alliance and the lynchpin to that alliance in their minds is Andrew.

Adel seems to be this years AJ everyone throws his name out there as a target but not sure if someone will waste their HOH on him.

Rachelle/Ika are disliking Heather, it’s a combination of her voice and Heather making a big deal of Rachelle’s flirting.

Unofficial Twitter Spoilers
(From people at the show*)
* Anick was evicted (11-0)
* A special announcement was made during the show a certain Big Brother Canada Season 1 houseguest is engaged.
Rumors are..
* Jillian and Emmett engaged
* Topaz Brady is engaged

The 3 potential mystery houseguests get to watch the other houseguests but not hear them.

Are there any US stations showing BB Canada?

Thanks for the link Simon. I liked the super hero outfits and the secret room is an interesting twist. I’m hoping Allison gets into the game.

Who’s going home as of now? Cheering for Ika to stay :3

Another year where the house votes the same. Boring.

who are the first 5 who voted together? i saw them make the 1 and then 5 sign with their hands when voting.