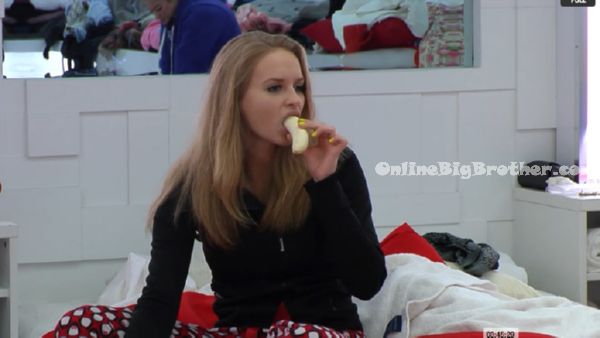 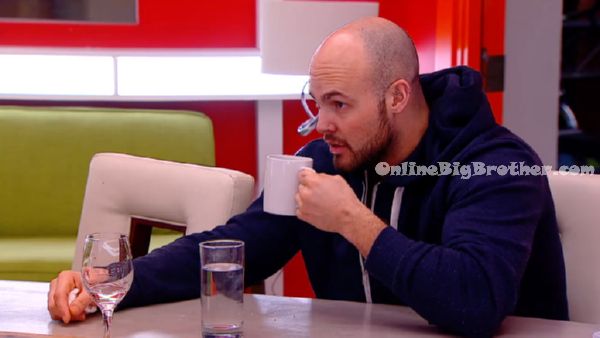 10:30am In the kitchen – Anick, Kenny, Andrew, Adel and Arlie are talking about people sending food back in restaurants. The talk about random things and about different diets. All of the house guests are waking up and getting ready for the day. Meanwhile in the bedroom Sarah, Ika, Sabrina, Rachelle, Neda and Kenny talk about how this experience will bond them together for life. Neda tells Sarah, Ika and Sabrina that they should name their alliance. She says we should call ourselves “The Stupids”. 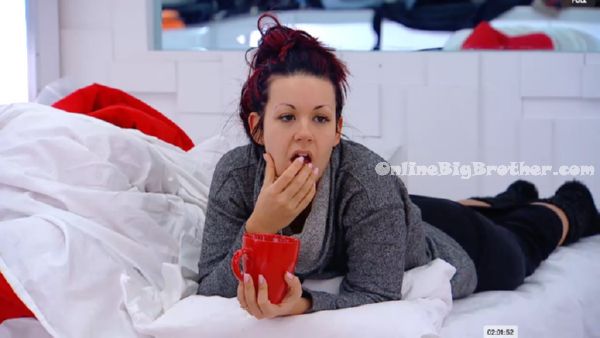 11am ON the living room tv screens the house guests notice the Live Eviction Today displayed. They then see something else on the screen and comment on how they could see Paul talking without audio. They comment on how Big Brother f**ked up and then the camera turns away. 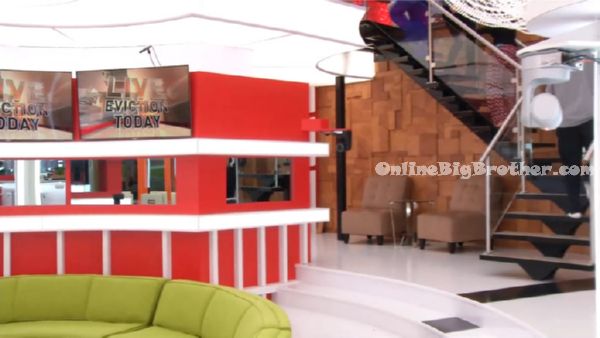 11:35am Sabrina talks to Anick about how she doesn’t want to have any hard feelings with her and that anything can still happen before the eviction. She tells Anick that she came on too strong and felt like she was trying to one up her in conversations. Sabrina says that now she sees that she doesn’t do that and how she likes Anick. 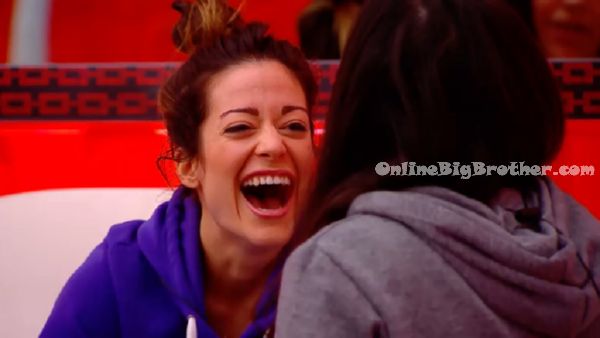 11:50am – 12pm In the kitchen Kyle and Arlie are talking about needing to win HOH. Arlie leaves and Jon joins Kyle in the kitchen. Jon tells Kyle to tell him which way to vote and he will vote that way. Kyle mentions that he doesn’t trust Rachelle because he just haven’t talked to her and can’t relate to her. Kyle says that like he tells Andrew, don’t get paranoid, we need to trust each other.

2:20pm The Live Feeds are still showing the “Hush Hush” screen. The live feeds will likely be down until after the episode tonight airs.

4pm – 4:45pm The live feeds come back on! Andrew, Kenny, Sara and Anick are in the kitchen talking about random things like renos and their birthdays. Big Brother then tells the nominees (Ika & Anick) to move their luggage to the storage room. All of the house guests are milling around waiting for the live show to begin. The house guests move to the living room and continue to talk about random things. 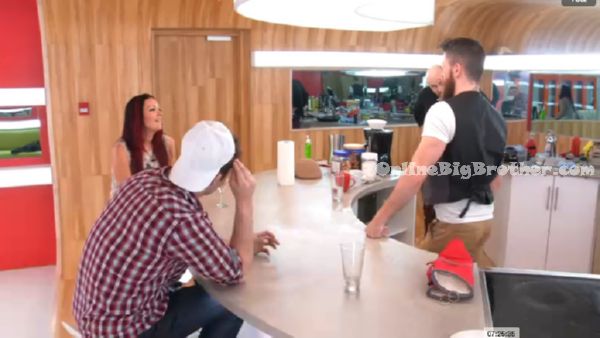 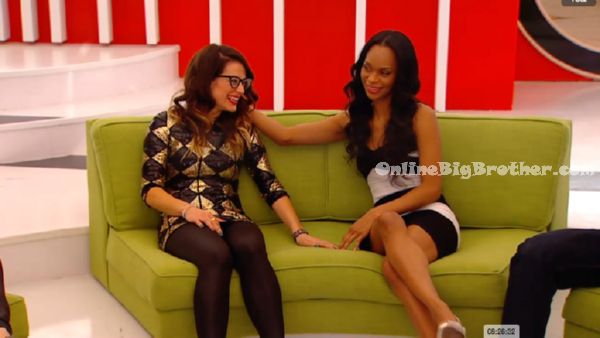 hopefully they all go after paul or adel next week bc they are annoying and i like the girls vs guy alliances!

Johhny (the European one!)
Reply to  d

I’ll be curious to see whether that’s the alliances that will stick… So hard to say since they all say what their current interlocutor wants to hear…
With that 5 girls and 5 boys alliance, the 3 names you didn’t cite are Heather, Adel and Kenny… Maybe we get an early start on the eternal “I’m the swing vote!!!” talk in the diary room 😉

oops, I meant Paul, not Kenny! 😉
I wouldn’t want Paul in my (real) alliance anyway! 😀

Thats sad. 2 of my favorites on the block already! fuck paul. rofl.

Anick was always going to be the very first few voted out. She’s too cuckoo

I am sooo behind I just watched the first ep and I already don’t like Paul he is shady.

Johhny (the European one!)
Reply to  TryingToCatchUp

Anyway to watch the episodes in the US? I remember last year they were on YouTube but I haven’t seen the episode on there yet?

Lol i think if you want to watch the show u can go on YouTube. That’s where I saw the episode that premiered last night. Just type in Big Brother Canada 2 episode. I hope I helped U.S. fans. 🙂

If you use googel chrome you can download an extension form the chrome store called Hola which allows you to access slice’s website and watch the episodes there from the US. Youtube is better though if you want commercial free watching but the quality of Slice’s website is probably better.

I posted these links to the OBB board http://forum.onlinebigbrother.com/viewtopic.php?f=6&t=67

I’m pretty sure they work in the US

there has only been one episode and you are here now. Now behind at all 🙂 lol

If I was in the house I don’t think I would want to win the 2nd HOH either.

I predicted correct on who would win POV and who would be evicted. Anyone else playing the BBC ‘play along’ game?
‘
‘

Late to the show, but so happy BBCAN is back. Better casting this year and better set design. Looks like Arisa is better as well. Keep up the great work OBB!!

PAUL needs to go next week.!

This will be a backstabbing week.

Complexe
Reply to  The Shield

AGreed. He nominated 2 of my pre-season favorites! ugh. he just needs to of never of been casted.. lol.

SHOCKER
Reply to  The Shield

I agree that Paul Insane needs to go, but BB is about lying so it will be hard to have a fave cuz they all lie.

The Shield
Reply to  The Shield

its too early to decide who i like waiting to see .. trying to place name with face

Sabrina: I went to Kim Kardashian’s birthday and talked to Kanye West for two and half hours, and so when you told you zucchini story about it being bigger than mine it really hurt my feelings.

Simon/Dawg, is there any way you can get a poll going on who we want as the 15th HG? Really interested to see what everyone thinks. Me, personally, voted for Allison. Thanks regardless! 🙂

U are everything…. for so many different reasons! Thank you!