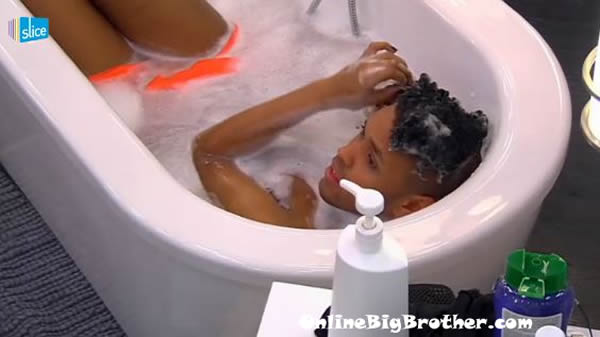 3:55pm – 4:20pm Gary and Jillian are up in the HOH bathroom. Gary is talking about how Tom didn’t really win the Power of Veto Competition. He says that Tom hadn’t really finished and we could have kept going but that big brother said he won. Gary says that really in my eyes Emmett won. Gary says that Tom didn’t have his puzzle pieces in right and we could have kept going. Gary talks about how he is going to find out who was the one vote to evict Emmett and tell Emmett. They talk about how they think Aj is stupid. Jillian says that she has an idea who she will nominate. Gary asks if Jillian will backdoor the person or let them fight for the veto. Gary tells her to be straight forward with people because it will help her when it gets to jury votes. They talk about wanting to get rid of Aj because he is annoying and talks too much. Jillian and Gary both agree that they can trust Emmett because he is honest. 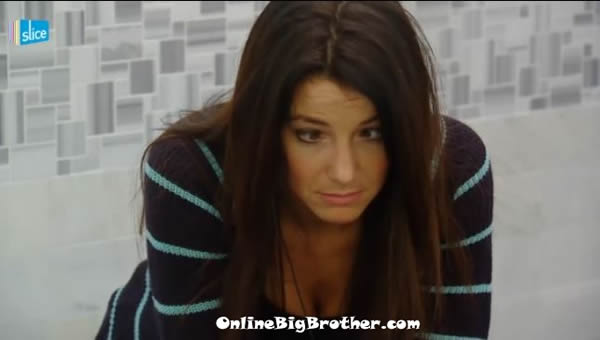 Video of Gary talking about Tom not really winning the Power of Veto:

4:25pm – 4:35pm Liza and Tom lay down in the havenot room and he talks about his personal life and family. He tells her she is awesome for listening asks what about you. Then before she can say anything he says I’m going to get something to eat. They head into the kitchen and Emmett asks if they were napping. Liza says that she just gave him a Bj and says that Big Brother never said she couldn’t eat that. She says she is going to get a lot of protein.

4:55pm SLOP SLAM! The havenots: Peter, Talla, Tom and Alex head into the bathroom just in case they throw up when they slam their slop drink. 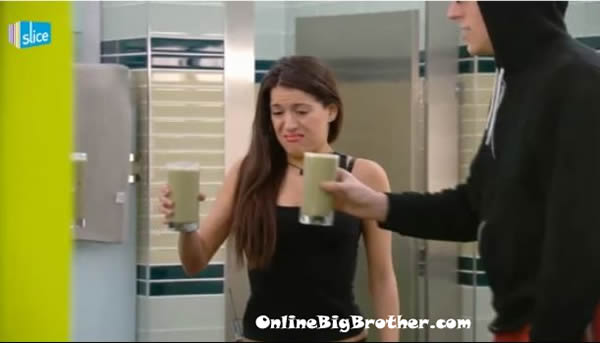 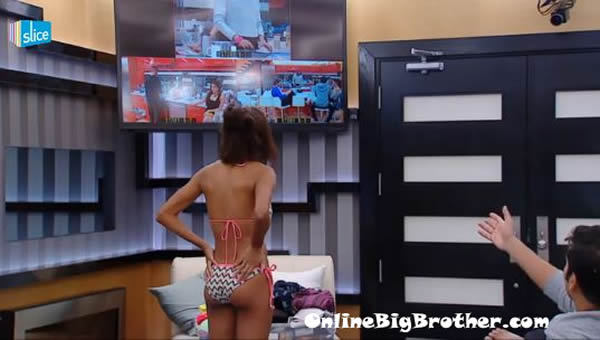 5pm – 5:20pm Talla and Topaz are up in the HOH bathroom. Topaz tells Talla that because Talla blew up on Andrew yesterday her name started to come up as a possible nominee. Talla asks why?! Topaz says because people think you’re unstable. Talla asks if Jillian will put her up? Topaz says um, no because you made a deal with her. Topaz doesn’t want to give names because she doesn’t want to get in trouble. Talla says she only got upset 3 times. Jillian joins them. Jillian leaves again. Topaz tells Talla that Aj is in love with her. Talla asks really? Why? Talla says that she is not interested in him at all. He is not my time, not at all! I am not physically attracted to him at all or sexually.. like not at all!!

5:30pm Aneal joins them. Talla and Aneal are alone in the HOH. Talla is really worried about being nominated and asks Aneal if Jillian is going to nominate her. Aneal says he doesn’t know he hasn’t talked game with her and thinks it would be weird if he did now. Don’t ask because then it makes you look like you’re nervous. Talla leaves. Aneal and Jillan start talking game about who they would and wouldn’t nominate. Aneal tells her that she doesn’t want to piss people off like Suzette did. He says you could put up Alec and Topaz because of their relationship. Or put up Aj and Gary which would be the easy choice. Aneal brings up how he thinks the guys have an alliance (Tom, Emmett, Alex and Peter). He says he thinks they are all trying to get a girl under their belt too ..so that they have the majority vote. Jillian figures she will nominate based on living situation ..just so that the whole house will be fine with voting out someone annoying like Aj. Jillian brings up how someone in the house really dislikes her and and has been talking sh*t about me. Jillian lets it slip that its a girl that dislikes her. (I think its Danielle that she’s talking about.)

6pm – 6:10pm Jillian, Emmett, Peter, Aneal and Alec are on the floor playing chess on the chess board that Peter made. Meanwhile in the bathroom Talla is talking to Tom about how she is worried about being put up on the block. Tom tells her not to worry, you made a deal with her in the HOH and dropped because of it so she would look really bad if she put you up. You have nothing to worry about. Aneal comes in to take a shower and tells Talla not to worry that he doesn’t think Jillian would put her up. 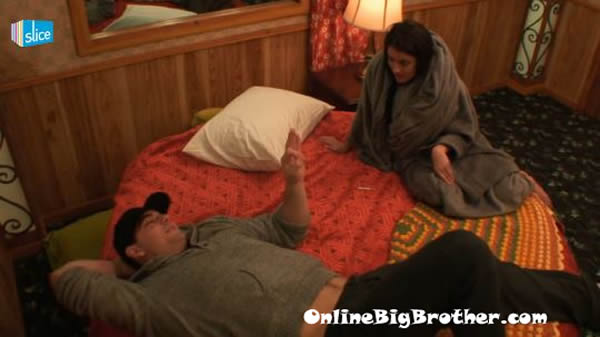 6:10pm – 6:25pm Talla and Tom are in the havenot room talking. Talla is pissed that her name keeps coming up as a possible nominee. Talla asks who the hell is calling the shots around here? Tom says me and then laughs. Tom wishes they would just get a double eviction. Talla says its too early ..do you think its too early? Tom says after 3 people are out we will probably get one ..that’s why we need to win HOH’s and POV to decide who goes. Talla says that she so could have won that HOH. Tom says that competition was made for you girls. Talla says that she is going to talk to Jillian later and just talk “girl talk with her.” She says she will just talk about who we would like to be with in the jury house. Tom says yeah that’s good. Talla says yeah I’m good aren’t I. Tom says that he doesn’t know if he really trusts Aneal. They end the conversation and leave the room. 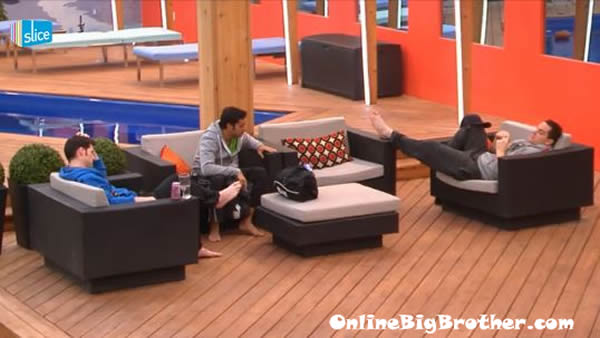 6:35pm Tom tells AJ and Andrew out by the pool that Kat told him that she knew someone in the house prior to coming into the house. Tom says that she said it was Aneal that she used to baby sit when they were younger. (Which is a lie that Aneal and Kat made up to try and save her, which didn’t work.) Tom asks if they should push for Aneal and Suzette to be nominated. Aj and Andrew agree. Andrew says that Suzette isn’t a threat at all she isn’t very smart, just listen to the way she speaks. They all start thinking other people in the house know each other too. 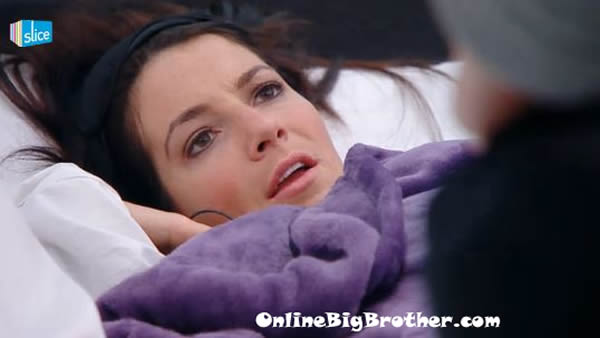 6:40pm – 6:50pm Tom and Jillian are talking in the HOH room. Tom says that he doesn’t trust Aneal because he doesn’t know where his head is at, and he keeps coming up saying stuff that makes me wonder. Tom pushes for Suzette and Gary to be put up. Jillian says she is thinking Danielle and Aj. Tom says that he will 100% support her decision and that he will try and win POV to keep the nominations the same. But if I win next week I am going after Suzette and I need you to be on board with that. Jillian says that she will be. Tom asks her to pinky swear it and triple lock it. Tom then tells Jillian about how Aneal and Kat knew each other. He says that he confronted Aneal and he denied it so I can’t trust him. Tom promises that he will vote out Danielle. Jillian says so you, Topaz, Emmett, Liza, Peter and Alec. Tom says we have the votes 6- 5 to vote Danielle out. Tom tells her not to put up Aneal, he is too socially strong right now. Jillian agrees. Tom says Aj and Danielle is your safest bet. Jillian says that she is just scared Danielle will win the POV and come after me. Tom says not if you and I are in the POV. Tom tells her not to try and back door Danielle, put up who you want out because its not a sure thing if you don’t. The end the conversation and Tom leaves. 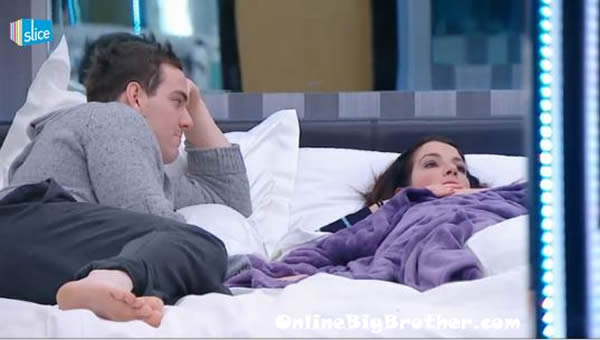 6:55pm – 7:05pm Topaz is still bathing in the HOH tub trying to get the batter out of her hair. Jillian gets into the HOH bed to take a nap. Meanwhile Alec, Emmett and Peter are still playing chess on the floor. One cam on Jillian sleeping, One Cam on Topaz bathing, and the other two cams on Aneal cleaning up in the kitchen. 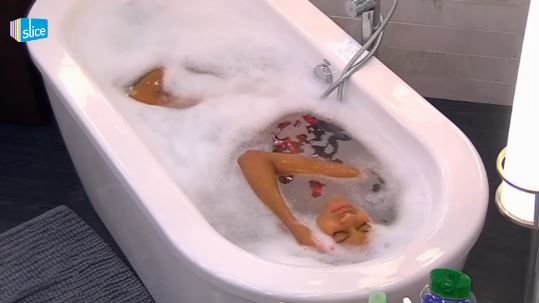 7:15pm Andrew and Liza are out in the backyard talking. Comments on how she has the brains but that her muscle to body mass is disproportionate which is why she didn’t do well in the HOH competition. Liza says “I am a skinny a$$ bit*h!” Liza talks about if she won HOH she would put up Aj. Tom joins them. Tom talks about how he likes Gary and has no problem with him. Tom tells them that he has no idea who Jillian will put up. 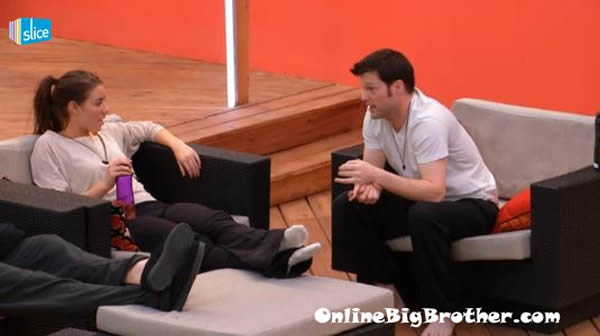 I have a feeling Tallia is BBCAN version of Rachel Rielly. Does she ever stop her whining? She knew what she was getting into signing up for BBCAN. Did she not see the USA version were they ate slop and did dirty competions? OMG people evict her this week