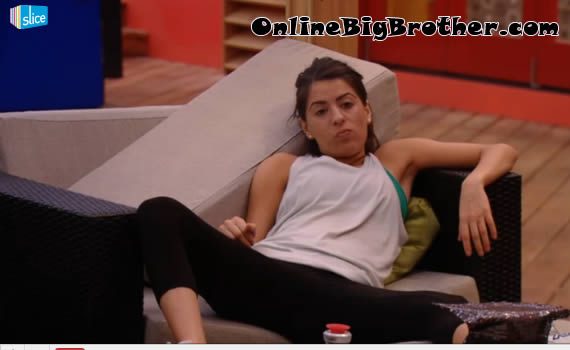 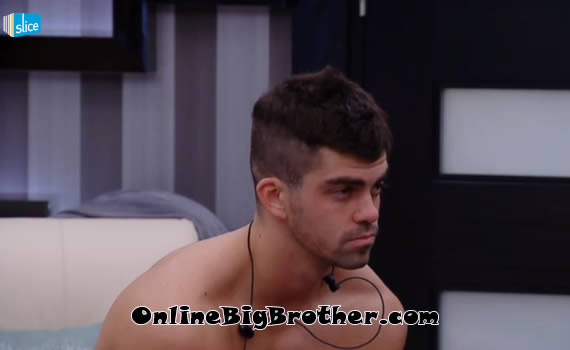 9:08am Alec and Suzette HOH Room
Suzette is freaking out that she is going home next week. Alec is trying to reassure her that there are many targets in the house. He points out that AJ is going to “talk himself out of the house” at the rate he’s going. Suzette mentions that she just wants to make it to the Jury house.

Alev tells her if Emmett or Tom win HOH Suzette will be probably be nominated, he thinks he can talk them into putting Suzette up with AJ which probably means AJ goes home. They both agree that everyone likes Suzette. Alec really pushes that Tom is after her but if she does as Alec says he can help her stay in he house.

Alec: “Don’t over strategize and don’t over-think it.. let people with more abrasive personalities come out” 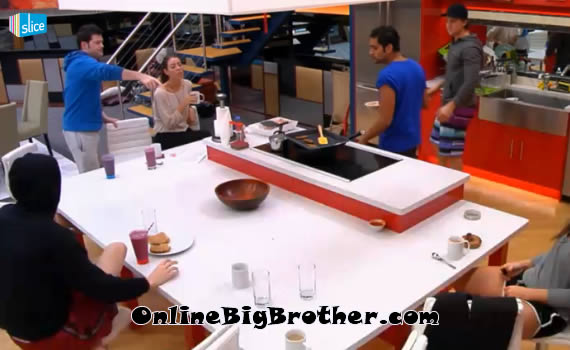 9:17AM Kitchen most houseguests milling around the kitchen getting breakfast ready. You can hear Kat in the background.. “Ya F**k you BRO.. F**k you Bro” Juat random conversations. 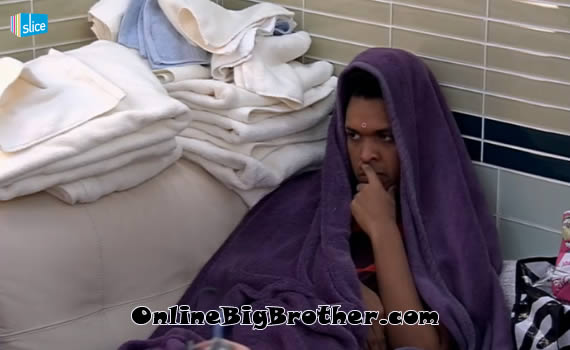 9:22am Bathroom Gary, Danielle and Talla Gary is saying that Danielle really knows how to dress to flatter her body. Danielle mentions that her family will not be watching the live feeds. She doesn’t really think they will be watching all the episodes either. Gary’s family will probably not watch the feeds either. Danielle: “My mom has no idea what a PVR is.. nor do it F**K it” Talk moves to bathing suits and how Danielle looks good in “60’s” styles clothes.. Cam switch to the backyard..

9:24AM Backyard Kat and Aneal

Kat saying that she’s been working on Alec last night. Kat goes back to coaching Aneal.. She’s acting like she has the entire house figured out.

Kat is telling him to leak some information to Liza to see where it goes. She plans on dropping bombs before she leaves today.

Aneal: “I think I should drop a bomb in the F***ing house”

Kat: “I think you should talk to Liza let her know give it a few days see if it goes really public.. and if it doesn’t tell Tom and Emmett.. and I will say”… Talla joins them acting all upset because Andrew was giving her a hard time for being lactose intolerant. Apparently Big Brother hasn’t given them very much Milk. Aneal mentions that they haven’t been given milk for 8 days. Talla goes on and on about being lactose intolerant and how Andrew bugs her about it.
Kat suggests she says: “Fine i’ll drink your milk and fart on you all day.. you F***er” Talk moves to the HOH comp today. Aneal: “I don’t think HOH is endurance otherwise they would be building it”

Kat Leaves talla and Aneal. Aneal asks her if she wins HOH who will she will put up. Talla doesn’t know she says that most players won’t make their nominations personal like Suzette did. Aneal plans on locking himself in the HOH for 3 days if he wins HOH. Talla is worried that the groups in the house will not break up. Aneal agrees. Kat joins them t and says that the “power houses” in the game will be targeting the floaters before going after each other. Kat: “The people that are powerhouses see the floaters as threats because they don’t know what side they are on” Tom Joins them. Kat heads to the hammock.

Tom asks them if the vote is going to be 12 zip against Kat. Aneal doesn’t know. Conversation moves to the comp tonight, they all agree it’s not going to be endurance.

Tom tells them if he has to be in a comp where he’s standing for a long time he’s going to wear comfortable pants and play pocket pool. Aneal asks him what is pocket pool.. Tom: “Touch your c**k pocket pool… ”
Kat comes back and starts to explain to everyone what “Backdooring” means in the Big Brother Game. She uses the example of Frank from Big Brother 14. Tom leaves Kat explains that Suzette backdoored her and didn’t even know it… Liza joins them. Talk is still on “Backdooring” 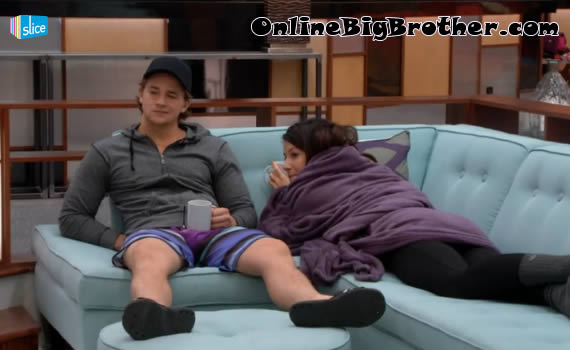 9:50AM Emmett and Jillian on the couch

Jillian is complaining that she was called into the Diary room right after she woke up.

Jillian: “everytime I get called in (Diary Room) I sound like a stoner i’m so tired.. my Diary room persona is stoner girl.. I can tell they were fishing for something”

Kat is coaching them telling them that the house is guy heavy they need to talk Tom into voting out emmett. Kat instructs that they tell him the vote is tied and Suzette is going to vote to evict Emmett.. Talk moves to the girls saying they are tomboys.
Liza: “ I think I’m a boy in a cute little girl package. “
Kat: “I have a vagina where testicles should be” 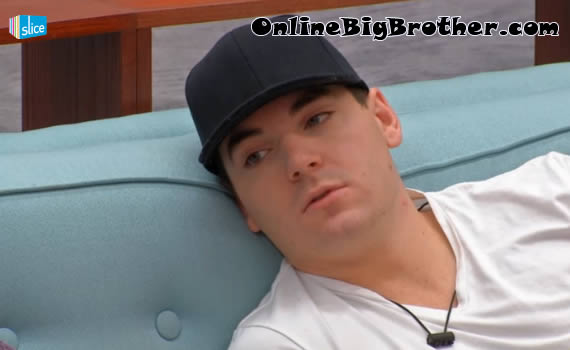 Tom saying they need to win HOH otherwise both himself and Emmett are going back on the block. Tom is confident they have the people to control the votes. He starts to count their people, Liza, Peter, Andrew, Topaz, Alec and they probably have AJ
Jillian: “OK do I need to get in with AJ.. maybe I should make out with him” 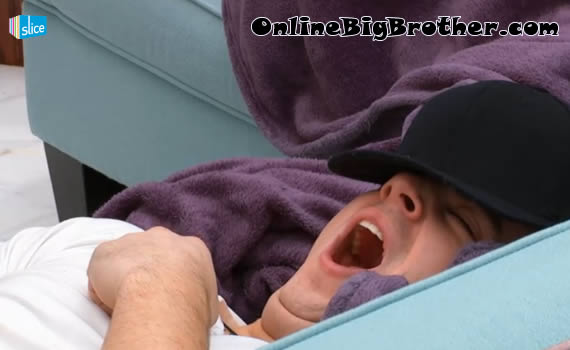 10:37AM Feeds back Random conversations.. Suzette is talking about Working out “Sculpting her guns”

Great work Simon and Dawg. I’d like to encourage everyone to hit the donate button and show some OBB appreciation. Simon and Dawg do a lot for us and it doesn’t come for free.

I really appreciate the support Thanks Chloe!